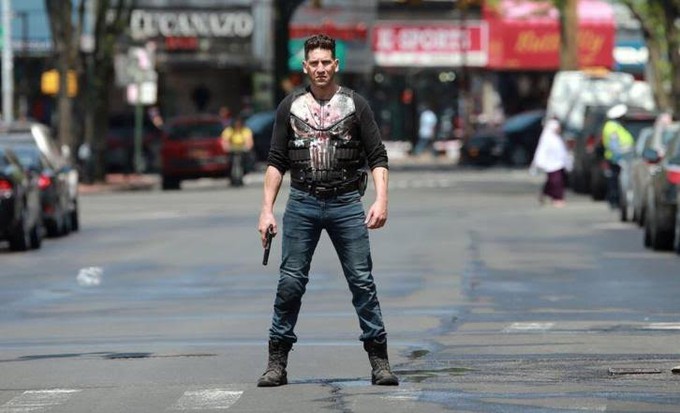 Coming right after the third and lamentably final season of Daredevil- and his own rather satisfying launch, as well-, THE PUNISHER is a big disappointment in its sophomore season. And once again, as it’s been the case way too often with the Marvel properties in Netflix, the main- almost sole- reason is an almost unbearable overlength.

The first episode promised so much better, however. Using its entire initial half hour to slowly- appropriately so- introduce an unexpected love interest for Frank Castle (played by returning MVP Jon Bernthal with utter perfection, this time even more uncannily resembling artist Steve Dillon’s interpretation of the character) immediately proves wise as we are allowed to actually buy their admittedly fast yet actually believable budding intimacy as it develops. Then all hell breaks loose- as expected- and the first bone-crunchingly realistic fight scene of the new season- a honky-tonk bar brawl- speed things up, leaving the walls splattered with blood and the audience honestly giddy with hopeful expectations.

Alas, the remaining twelve episodes (feeling too few for something actually alluring but a bona fide burden here) are not interested in keeping that quality level of storytelling. At all. Frank leaves his newfound friend/love interest in the hospital's IC unit, a bullet wound in her belly, hanging onto life by a thread, her young son possibly about to become an orphan, and then we never hear anything from them again. Granted, he’s elsewhere occupied trying to keep the cause of that original ruckus alive, a girl (truly compelling Giorgia Whigham) being relentlessly pursued by a band of assassins comprised, mostly, of young women. But returning showrunner Steve Lightfoot (surprisingly, a former executive producer in the vastly superior Hannibal) is not interested in maintaining any sort of continuing empathy and as episodes go by that opening glimpse into Castle’s inner workings and motivations fade fast from purposeful intent to happy fluke to simply forgotten irrelevancy.

What this second season focuses on is the forced bond between The Punisher and Whigham’s Amy as he feels obligated to protect her and find whatever dark forces are intent on killing her and that would have been enough and perfect if we’d not been firmly assured by that opening salvo that we were witnessing a new, important page on Frank’s life being turned. What’s even worse is that the show doesn´t even commit to that goal. Instead, we have to watch (endure) arguably the very worst aspects of the mostly compelling first season come back to take the spotlight for depressingly long chunks.

Ben Barnes plays Billy Russo once more, last seen laying at Frank’s feet on a carousel, his face shredded off, ready to become The Punisher’s classic nemesis Jigsaw. After we catch up with him, amnesiac, attending therapy and with his face covered by a plastic mask- all standard but effective enough devices to drum up tension and dread- he finally gets his close-up to reveal Barnes’ GQ cover boy-worthy visage, barely accentuated by six or so thin scars surrounding forehead and cheeks. This decision- transcending misguided to become outright stupid- can´t even be labeled a hollow mistake, not in a gritty violence-soaked take on a source material that is nothing if not pure pulp.

Amber Rose Revah is back as well to play FBI special agent Dinah Madani and although the relationship she had with Russo (probably the very nadir of the season) is obviously finished (he tried to kill her back then, so…) and it has been replaced by her obsession to make sure he pays for his crimes (she wants revenge, in short) Lightfoot and his team of writers, in a stroke of inspiration, decided to make up for it by coming up with a new, equally tedious and pointless, relationship for Russo in the form of his psychologist, Dr. Krista Dumont (Floriana Lima). Eventually, unbelievably, she goes from professionally treating him to having sex with him, to falling in love, to aiding and abetting, to advising on how to kill three innocent women to destroy Castle’s purpose, to trying to kill an FBI agent herself. Barnes’ amnesia (and the consequent lack of his previous conscious corruption) lent itself to at the very least serviceable- if not great- drama but the end result offers scene after scene of existential anguish brought on by his “disfigurement” and little more thus making all the time spent on these characters seem as absolutely lifeless as completely devoid of purpose.

To top it all off, we are introduced to John Pilgrim (played by Josh Stewart, a face you most certainly have watched more than once although you are not quite sure exactly where, in a performance that demands you take notice) a character, Lightfoot states, based on The Mennonite, from the comic books. The character is, quite honestly, a very riveting gimmick; a deeply religious man, devoted to his dying wife and two young kids, bound by some unarticulated past to the shady characters in pursuit of Amy, forced to moonlight as a hitman. Sadly, he spends practically the entire season sharply excised from the main events and confined to his own, sincerely appealing arc, an overall effect that feels more like an ongoing backdoor pilot than an actual, organic piece of the story. 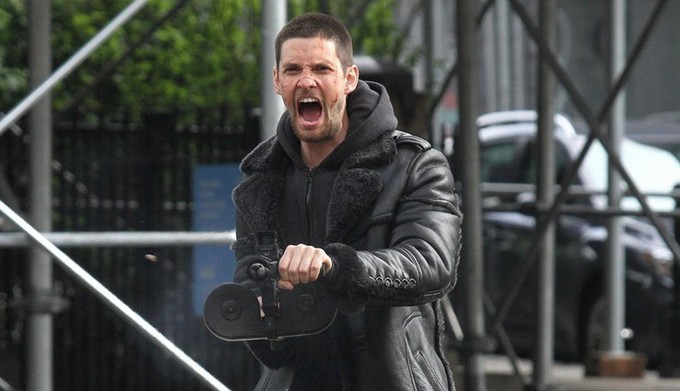 The action hits hard when such spurts finally come, at least. There is a lot of gunfights but the focus seems to be firmly set on hand-to-hand combat and it manages to be genuinely gruesome at points. Early on we get an episode riffing on Assault on Precinct 13, there is a rather welcome humorous holdup of a check-cashing place by Billy and his band of disgruntled war veterans and the three last episodes decide to, finally, get down to business, but it all feels like a little too little, a little too late.

Whatever life there is in here resides strictly in Bernthal’s portrayal of this vigilante, growling his lines with the best ever impression of Sly Stallone playing Batman, and the already mentioned scene-stealing turn from Giorgia Whigham, a charismatic actress able to play a formidable range of both age and emotion in whatever parts the future holds for her. Also welcome is Deborah Ann Woll as Karen Page, providing a much needed instant jolt of likable recognition, transforming her sole episode into a bittersweet swan song for the character she created in Daredevil and turning it, almost only by association, into one of this failed attempt’s highlights.

The last shot shows us Frank Castle attired in full Punisher regalia, handing two humongous machine guns, firing indiscriminately upon two rival gangs, hollering a war scream at the top of his lungs. Although it was, for sure, inevitable to reach this point, I can´t but remember the first season’s finale, with Castle attending a support group for veterans, actually sharing, before it cut to black, without any score leading our emotional reaction. It felt- like the broken promise of this season’s opening- honest and real, and it seemed a way more correct manner to depict this character, broken beyond the possibility of any repair, on his way to ultimate perdition.