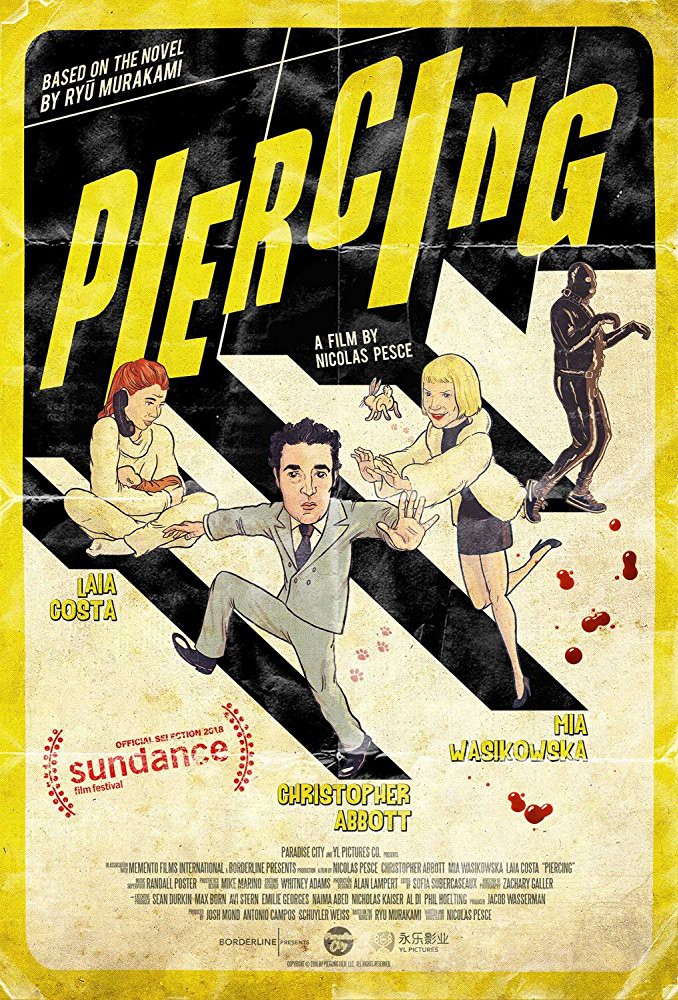 Last October at Fantastic Fest, I had the opportunity to talk to writer/director Nicolas Pesce about PIERCING, his new dark and disturbing film starring Christopher Abbott and Mia Wasikowska.  Based on the novel by Ryu Murakami, the film is a sadistic little story about a wannabe killer and his equally demented victim. The highly stylized film features many bold design choices as well as an incredible soundtrack packed with throwback Italian Giallo goodies. I published part one of our chat back in September, and now I am hear to unleash part two in support of the movie's 2/1 theatrical release. Enjoy!
Kellerman: Can you talk about the effects in this a little bit? It looked like there was a mix of CG and practical. Can you talk about some of those choices? And just maybe some of the practical aspects of doing, like the water scene, that sort of stuff?

Pesce: Yeah. Very minimal CGI. The only digital effects are in the trip sequence and comping some miniatures into backgrounds. And then all the gore stuff is all practical.

Pesce: Mike Marino did all the effects, he's the guy who came up under Rob Bottin, who did THE THING, and FIGHT CLUB, and SE7EN, and all that. And he really, I mean, his shit is so realistic. And I think people are often really afraid of how you have to shoot practical effects, because it's like well you have a tube running out of here, so you can really only shoot it like this. But Mike's thing is like, "Nah, you can shoot my applications in a close up from any angle". And when Mia is wearing that leg application, she couldn't tell where her leg started and where the application started. And it's, for me, that's one of my favorite parts of making genre movies is getting to do all that stuff. It's like seeing that in real life, it's one of those moments where you're like, "Whoa. This, I've created a really fucked up moment that we're all sitting, and watching, and it looks real".

Pesce: And it's a very strange experience for me watching it, but especially for the actor doing it. And I think that it brings a lot to the performance to have Mia's reaction to that. And so it brings a reality to it. And I think that in the 80s, you look back on a lot of what is considered the best makeup work, and it doesn't necessarily hold up. But technology and all that stuff has gotten so good that ... And obviously the people who learned from those guys and gotten so good, that you can really ... It's no longer like, "Oh, if you want to do this, you go practical, but if you want it to be slick go CGI". It's like, no you can make it really slick. And I think that's it's always going to be more affecting if it's there, the actors are dealing with it, it's lit by your lights, shot by your camera.

Kellerman: It exists in time of space, it's not ones and zeros.

Pesce: And then you can do things like Chris's face wounds. His performance is altered by the fact that one of his eyes is pushed shut. And little things like that are gonna really effect how you do something. And then when it comes to stuff like the flooding of the bathroom.

Pesce: It's like that's where, on an indie movie you gotta get really clever. 'Cause it's like, "Well how would you do this in a real movie?", and it turns out that the real way you flood sets is you lower the set into a pool, rather than actually flooding it. So that you can have control over it, and we could not do that. So we just flooded it.

Pesce: We literally moved the set into a dumpster lined with a pool liner, and then brought in a water truck, and just flooded it with disgusting shit. And it's one of those things where it's like it's movie magic, but you just do it.

Kellerman: So this is your chance!

Pesce: Go for it.

Kellerman: Such a cool scene. So what about the creature scene?

Kellerman: Okay. That's CGI. It was really cool. And that's what's so fascinating- I was like, "Which is which?" I know theres a little bit of both, but its really tough to tell. So, the fact that it's mostly practical is pretty exciting. 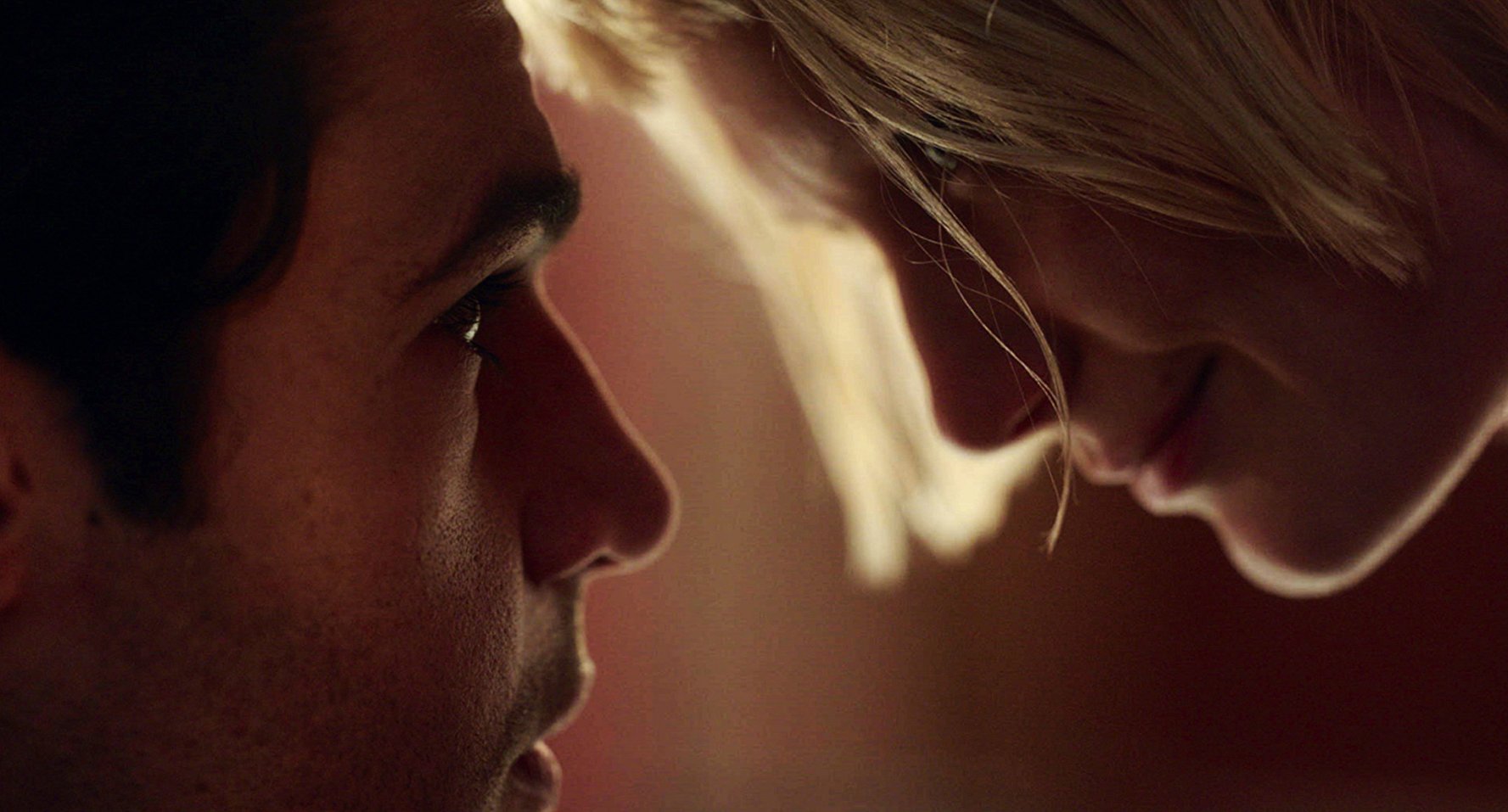 Kellerman: Those two actors, Christopher Abbott and Mia Wasikowska, have absolutely incredible performances. How did the casting process come together?

Pesce: Chris was a friend of mine who I met years prior. And everyone always casts him as these shlubby... they're always like, "Gain weight, grow your beard, you're a regular blue collar guy." But in real life he's so not that. He really is a pretty boy. And I wanted to give him an opportunity to be the Christian Bale in AMERICA PSYCHO- wear a suit, be clean cut, look good, and do something that was wildly outside of his comfort zone. He's so used to doing very naturalistic stuff. And I thought it would be fun to give him something totally different. And with Mia, it was, in my head it was a long shot that she was gonna say yes to playing an S&M prostitute.

Pesce: But she was like super into it. And I mean, similarly it's a role that people don't go, "S&M prostitute, oh my god cast Mia Wasikowska." It's like she plays such different roles and I think that letting her do something different got her excited, but also she's an actor who brings so much to the tone of the movie, just in her style of performance. And she is super stylized, and super smart, and the two of them just brought so much with their performances, to the tone of the movie. And really kind of instantly clicked, and with a movie that is literally two people for the whole thing, you need that chemistry. And they had it.

Kellerman: All right. Looks like our time is up. I want to thank you so much for taking time to talk with me about PIERCING today. It's a really phenomenal film.
Pesce: Thanks.
So that wraps up my chat with writer/director Nicolas Pesce about his cool new horror/thriller PIERCING. I hope you enjoyed it. If you are a fan of twisted tales, cringe-inducing effects, and throwback Italian Giallo scores, you really shouldn't miss this one. PIERCING opens in theaters on 2/1.
Thanks for reading,
Rebecca Elliott
aka Annette Kellerman