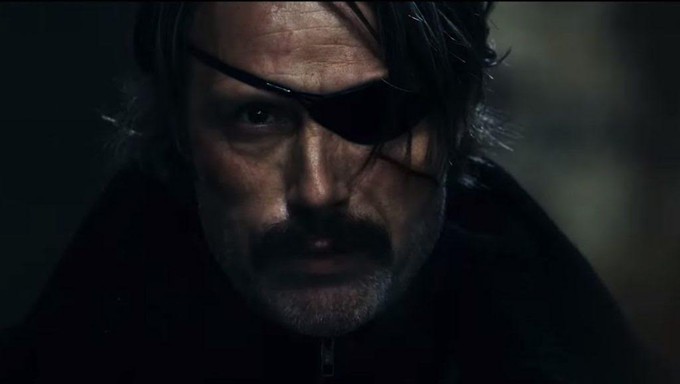 POLAR starts with the kind of Poochie-like sort of coolness that demands every member of a band of assassins popping up onscreen to be properly labeled with a big, colorful title card- “Hilde”, “Sindy”, “Facundo”! (lacking, however, the similarly desperate yet way more effective attempt found in Faster’s penchant for a more playful anonymity: “COP!”, ”DRIVER!”)- and Earth Wind and Fire’s September to be accompanied by its lyrics, karaoke-style. After carrying out the hit (in a most intricately impractical fashion that demands one of their undercover members to actually perform fellatio on him AFTER he’s already been on the crosshairs for minutes) on their unsuspecting mark (played by Johnny Knoxville in the exact kind of celebrity cameo guaranteed to grant this its rightful awesomeness-cred stamp) the movie forgets all about this initial declaration of intent in a progressively quick fashion and, stylistically, ends up becoming quite standard.

However, as infused with Saturday cartoon logic (unlikely to come from artist Victor Santos’ original webcomic- apparently a rather experimental effort, completely devoid of any dialogue whatsoever- or the subsequent Dark Horse Comics graphic novels that Jayson Rothwell’s screenplay is based on) as it is, POLAR manages to still feel like a throwback to the late-90’s barrage of Tarantino knock-off wannabes that dealt with, mostly, the same plots, themes and characters and came up with titles like “My High School Sweetheart’s Private Stash”, “Two Girls, a Guy and a Gun” or “8 Heads in a Duffel Bag” (the latter one is actually real). Whether that sounds like an endorsement or not it´s up to you.

In short: Mads Mikkelsen plays Duncan Vizla (or Black Kaiser, as his own appropriately flashy title card, tells us), a hitman plagued by inner demons that won´t let him leave his past behind two weeks away from retirement. The reason we know with such exactitude how long he still has to go is because he- along with his peers, already introduced- works for a company of assassins that provides their workers with a retirement plan (and, one assumes, all other standard perks of corporate life) that kicks in at their 50th birthday, the mandatory age established by overlord Blut (Matt Lucas, Tweedledee/Tweedledum from the Alice in Wonderland films). Vizla is due to a final payment of almost nine million dollars and Blut prefers to have him killed since the fine print in the contracts (actual ones) establish that, in such cases, his company becomes a sole beneficiary. Bullets ensue. 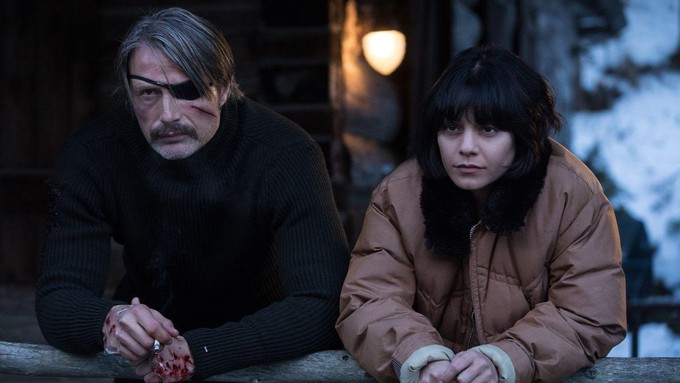 Of course, in the meantime, Vizla has time enough to meet and grow fond of next-cabin neighbor Vanessa Hudgens, a buttoned-up, apparently, traumatized woman with whom he quickly bonds.

All the rest is excess. Excessive violence, excessive nudity and excessively long and candid sex scenes without much purpose other than titillating. And titillate they do. If I’d caught this one in my teen years I would have probably immediately sent it way up in my list of favorites but nowadays it works as sufficiently satisfying genre fodder and little more. Director Jonas Akerlund (responsible for last year’s Norwegian black metal chronicle Lords of Chaos) orchestrates the action with a steady hand- literally, thankfully; there’s no hand-held action to be seen- and depicts every bloody wound, cracked skull, and sweaty nipple with often stomach-churning detail. By the time we reach the promise of four days of excruciating torture for the Kaiser, though, it begins to feel like overkill and Akerlund seems to realize this as well since at this moment things start to speed up and leave behind the mostly realistic carnage to embrace a considerably more ludic approach, complete with virtual-machine-gun-gloves a la Valkyrie in Thor: Ragnarok.

Mikkelsen can play the lead easily- watch his great western The Salvation if proof is needed- and his stone-faced tough guy is totally believable –watch three amazing seasons of Hannibal if further proof is required- and it is his presence- even as languid as it at points becomes- that saves POLAR from being swallowed by instant oblivion. It will take a bit more than that to forget and it will eventually pop back up into consciousness when the necessary adolescent mindset welcomes it.