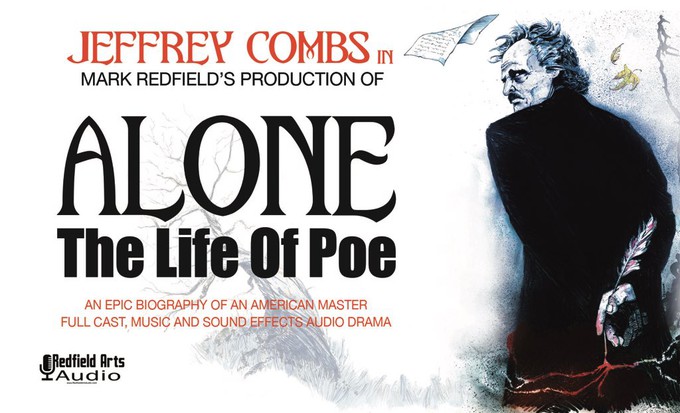 Mark Redfield sent an announcement that the talented Jeffrey Combs ( "Re-Animator" and "The Frighteners") will voice Edgar Allan Poe in the 10-hour audio-biography “ALONE The Life of Poe.” The audio-book helms a full cast, original score, and sound effects. Other voices in the epic telling of Poe’s life include Lana Wood (Diamonds Are Forever) as Maria Clemm Poe's Aunt, Mackenzie Menter as Virginia Poe, Brinke Stevens ("Personal Demons," "Slave Girls From Beyond Infinity," and "Sorority Babes in the Slimeball Bowl-O-Rama"), Debbie Rochon ("Model Hunger," "Slime City Massacre," and "Post Apocalyptic Commando Shark") and others in the cast of 200 speaking roles.

Here is the video announcement of Mackenzie Menter Poe’s mother.

"Elizabeth Arnold Hopkins Poe was Poe’s mother. An English actress who, while so young, became popular in America, gave birth to her second son, Edgar, in Boston in January 1809. Tragically, she would die a few short years later in 1811, leaving her three children, Henry, Edgar, and Rosalie orphans. We are very proud to announce that Eliza Poe will be voiced in our production of “ALONE The Life of Poe” by Mackenzie Menter. An up-and-coming singer-actor on the New York stage, Redfield Arts Audio listeners will hear her fine performances in our upcoming audio dramas “The Adventures of Harry & Bess Houdini” (as Bess Houdini), and as Anna in our audio adaptation of Eugene O’Neil’s powerful “Anna Christie”."

Here we hear from Mark Redfield as he goes into detail about the project.

"Written and produced by Mark Redfield, ALONE The Life of Poe is an epic audio drama chronicling the extraordinary life and times of Edgar Allan Poe. Presented over a story arc of 20 half-hour Chapters, with a running time of over 10 hours ALONE The Life of Poe will feature the finest actors assemble to voice over 200 roles. Original Music is Composed by Jennifer Rouse, with period music woven throughout the production."

"Mark Redfield is a professional actor, author, and artist. He has produced and directed several independent films, including The Death of Poe (2006) and Dr. Jekyll and Mr. Hyde (2002). He has operated two successful theater companies, and has appeared in or produced over 200 plays. He is a voice actor who has worked in radio drama, video games, audiobooks, and commercials. He currently produces audio drama through Redfield Arts Audio. Redfield has been developing ALONE The Life of Poe, on and off, for over 10 years. He has worked as an events producer for The Poe House and Museum in Baltimore, raising money for the City of Baltimore to care for the National Historic Site. He then served as Vice President for Poe Baltimore, Inc., when the transition was made by City government to semi-privatize the care and fundraising for The Poe House and Museum in Baltimore."

“This project is perhaps the most important thing I've ever done. It’s my “magnum opus”, my final word on Poe. I have to get this story out and to it’s audience. I’ve never been more passionate about Poe, and in telling his story.” - Mark Redfield

"Jennifer Rouse is a sound designer, musician, video editor, and actress. She has a Bachelor of Arts degree from Towson University. She studied acting at Stella Adler's School Of Acting, and music performance, voice, and music theory at BCCC and The Peabody Institute. Jennifer Rouse began playing music at the age of 10. In her high school years, she was a member of the Baltimore County Chorus as well as the Maryland All-State Band. At 13 she began studying singing at The John Hopkins Peabody Conservatory and at 16 was a member of The Baltimore Symphonic Band. She received a scholarship for music to Towson University where she studied music theory, composition, as well as voice. She wrote the film scores for “The Death Of Poe” as well as “The Avenging Conscience”."

"There has never quite been anything in an audio drama of this depth and breadth. 10 hours to fill with the tragedy, the comedy, the triumphs and the disasters of Edgar Allan Poe. Poe fans will be excited for a dramatized biography that corrects the lies and misconceptions of this great American writer. You are contributing to the creation of a one-of-a-kind, exciting story. You are helping us bring Edgar Allan Poe to life!"

What They Need & What You Get

"Our fundraising goal is a production budget of $75,000.00 We have selected some affordable perk and reward levels for this campaign so that everyone can be a contributor! The main item offered at every contributor reward level is the 10-CD Boxed Set of “ALONE The Life of Poe”, including a production booklet and First Publish Edition Certificate of Authenticity. We have added other wonderful items as the reward levels go up. Pick the level that fits your budget and make your contribution to help bring Poe to life! OUR BUDGET Our campaign is a “fixed funding” campaign, meaning that if we DO NOT raise the minimum of our $75,000 budget, IndieGoGo will return all contributions collected with 5-7 business days."

Well, I adore Poes work, and this sounds like an amazing production on a scale that is rarely seen in audiobook productions. How many of you out there in Geeklandia love Poe and are willing to help Mr. Redfield's dream come true?