REIGN OF THE SUPERMEN soars to VOD - Review

REIGN OF THE SUPERMEN soars to VOD - Review

Hey, y’all! McEric here with my thoughts on the latest DC Universe Animated release REIGN OF THE SUPERMEN, available today on most streaming retailers. I had the opportunity to see the feature on the big screen last night as part of a Fathom Events double feature, preceded by last year’s THE DEATH OF SUPERMAN. I have to backtrack for a second and point out some things I noticed in the former film before we move on to the latest release. Bear with me. 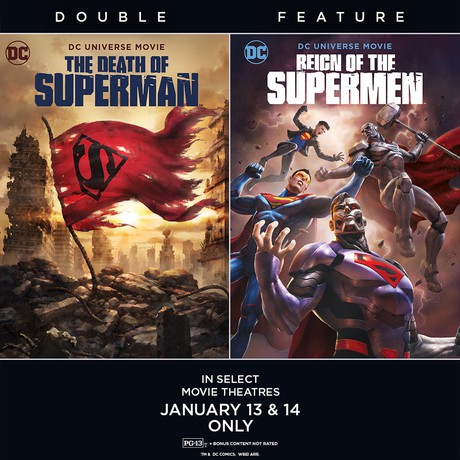 Our own Big Eyes gave her impressions on THE DEATH OF SUPERMAN when it was released last August and she was largely in favor of it. I was, too, when I watched it at home, but seeing it on the big screen highlighted some pretty glaring shortcomings. The voice acting is poorly paced; this is painfully evident in early scenes with Lois and Clark, voiced respectively by real-life couple Rebecca Romijn and Jerry O’Connell. The space between their call-and-response lines expands like a marshmallow in a microwave and finds the audience cringing in the silence. Even though the scene is meant to convey tension between them it doesn’t resonate that way for the audience; it is painfully underproduced. Picking up on this empty orchestra of voices helped another demerit shine like a new pimple on the silver screen: the dialogue is often terrible. Just watch the scene with Hank and Trisha Henshaw in space on the Excalibur shuttle: every line exists as exposition, and poorly so. It’s like seeing a black box play and having the principle stand at down-centerstage and declare “Boy, it sure is hot and humid down here in NEW ORLEANS, LOUISIANA IN THE HEART OF SUMMER.” Oh dear God, this happens for hours, doesn’t it?

Aside from that and a horrifically unfinished crowd scene at the end (it’s like an impressionist painting but waaay too close to your face), the pacing of the actual story helps divert your mind from these hiccups once Doomsday starts fucking up everything that lives. The fight scenes are truly visceral, and to hear the whacks and whollops on a theater sound system is akin to Lois’ experience reporting it on the front lines. The emotional beats are played well, and the theater was silent as our hero perished in his lovers’ arms.

But, wait, what’s this? The stone was rolled away and the body has ascended? New heroes wear the crest and fight for truth, justice, et al? Could this be a… REIGN OF THE SUPERMEN? 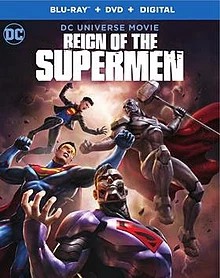 After a five minute intermission (with crowd noise to accompany a countdown screen. weird) we settled in for the epic follow up, adapted to screen for the first time. Maybe it was sitting through a second viewing of the imperfect 81 minutes of THE DEATH OF but I didn’t notice hardly any of the shortcomings in REIGN. I did spot some scaling issues during panning shots, but I think that was just a poor aspect ratio; this film isn’t meant for the big screen, and there’s nothing wrong with that.

The next 87 minutes offered a pretty clever adaptation of the original comic story, filtered through the new 52 and the continuing film universe established at the offset of JUSTICE LEAGUE: WAR. The JL have their Hall of Justice (which we saw trashed at the opening of JUSTICE LEAGUE v. TEEN TITANS, which led to Lex Luthor’s arrest) and later unveil their Watchtower orbiting station. The launch of the latter goes a little off the rails and sees the Justice League boom-tubed offworld, leaving Earth in the protection of the Supermen: a man in a steel suit called The Man of Steel, a lithe Supermanesque crimefighter with repulsor hands and a bitchin’ visor dubbed The Eradicator, a Cyborg Superman, and a perverted teenager on the (exonerated) Luthor payroll who is called Superman. As each vie for legitimacy in the eyes of the press, the public, the government, and Lois Lane, their differences and similarities are brought to light. In time, we are shown the good and bad among them, and villains and heroes surprise us in their machinations to seek true justice, et al. 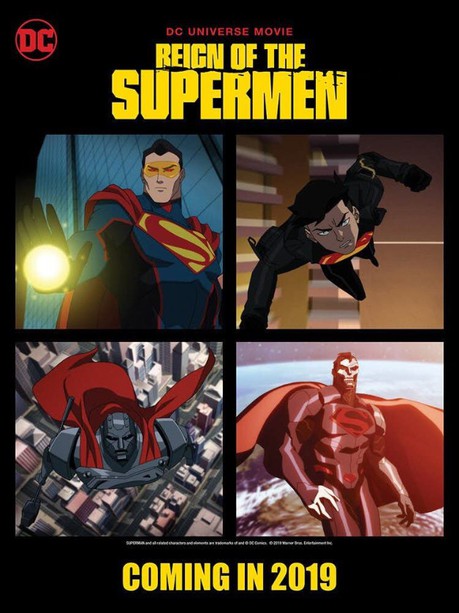 The changes made to adapt the original storyline to the New 52 are, and you can crucify me for saying this, more befitting the narrative than the original comic arc. It makes for a tighter, more manageable cinematic story, while still carrying enough WTFness to originate from no other source than the funny pages, themselves. Lex’s involvement, particularly, rings true to his core nature: a brilliant mind squandered in narcissism, capable of universe-altering acts of altruism so long as they cater to his wildly oscillating whims. Rainn Wilson returns to voice the bald egomaniac once more, channeling some truly sinister solipsism is some of his more inhumane moments, only to later spin to a braggart’s comically incongruent misanthropy. Stick around for the stinger at the end; you’ll laugh for the costume choices, alone. 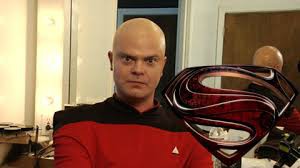 The film suffered occasionally while juggling its tone, as well as its many characters and their varied power-sets, but overall the pacing is steady and strong, and it’s easy for the viewer to root for their Super of choice. The “explanations” offered at the climax can be a bit thin, if not downright uncanny, but it does allow a lot of the more ludicrous aspects of the story to be swept away for the sake of further continuity.

When I first left the theater I wasn’t sure if I liked the movie, but now that I’m writing about it, I can’t say anything too negative. It was a wild ride (seriously wild), but that’s what these stories are: books of fantasy, stories of the wild unknown. I’m a huge Superman fan (I have his shield tattooed on my body) so I’ll never pass up an opportunity to see him save the day. I knew going into this that I would see many “heroes” bear the insignia while not being the man, though that was not why I went to see this installment. I went for the Resurrection. I went to see the stone rolled away and the body ascended, to see the Hero return. Along the way, I found other heroes; men and women who chose to be the better versions of themselves, the better aspects of humanity. I think that’s the best we can ask of our superheroes: to help us see them in ourselves. 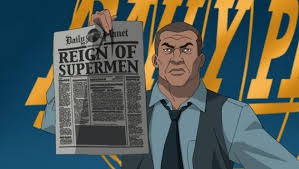 REIGN OF THE SUPERMEN is available now on most streaming retailers and hits shelves on BluRay and DVD on January 29th.

Until next time, I’ll see you at the movies!!

(And extra special shout out to the six other nerds who attended this event at the theater I visited. We were a small but devoted group.)