Why is this review so late? I thought I’d give you guys a chance to see it over opening weekend first so we can discuss this movie more in detail, and Wheels just couldn’t wait to talk about it too, so I waited. I’m sure you guys will let me know how you feel about waiting. Please do!

The entire idea of SPIDER-MAN: INTO THE SPIDER-VERSE just seemed so surreal when I first learned about it around this same time of year. They hadn’t even revealed what it was going to be about or who was in it beyond the Miles Morales version of Spidey. I don’t think we have ever seen an animated Marvel movie on the big screen before either. I’m glad to share that it was a great movie experience! 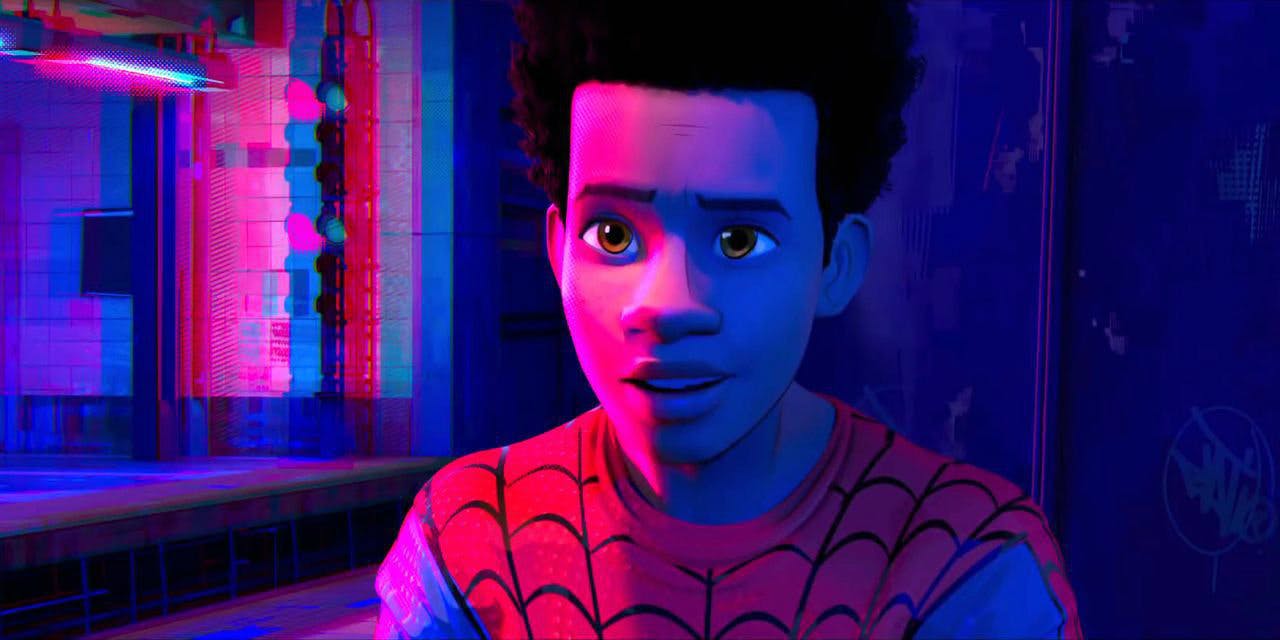 The movie centers around our main Spidey, Miles Morales. After being bit by a spider that came out of nowhere (literally), giving him his spider powers, he stumbles across Peter Parker as Spider-Man fighting the Green Goblin. In a moment of reprieve, Peter promises Miles he will show Miles the ropes afterwards, and returns to the fight. Things don’t go so well, and Peter is killed in action, leaving Miles mentorless. Suddenly all of these other Spider-people start appearing around the city as a result of an experiment from Kingpin and his scientists.  The spider-people must ban together and stop Kingpin’s experiment before it destroys the multiverse.

We’ve seen attempted use of comic-like panels in previous movies like Ang Lee’s HULK, where the panels came off feeling just kind of sloppy and confusing, but in SPIDER-MAN: INTO THE SPIDER-VERSE it works! It is elegantly stylized and a triumph of visual excellence. With the use of Benday dots, depth, mixed art styles, panels, and framing, it all just sounds like too much on paper, but the artist have expertly pieced it all together and created a beautiful movie. There was one flaw in all of the art I could spot, or not. When they attempted to insert some depth at times, they blurred the foreground which left me questioning if I had missed grabbing any 3D glasses before I sat down. There was a lot of concern over the framerate when the trailers first came out, but it really isn't a bother watching it all in motion. Overall, the look of the movie came out phenomenally. 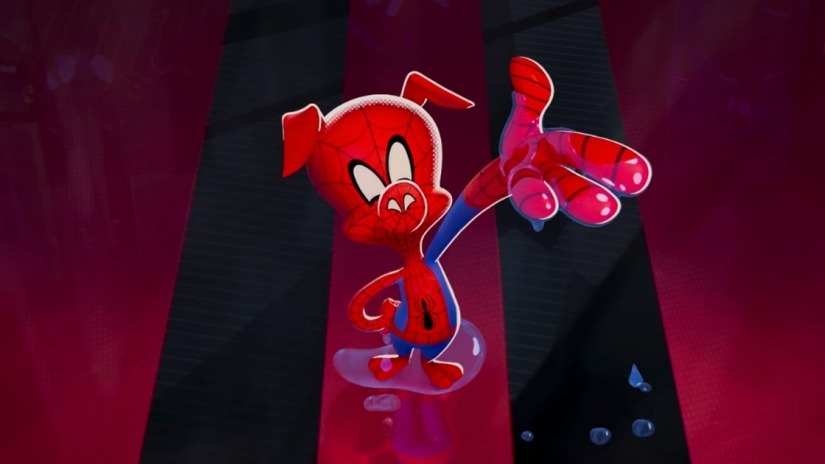 Moving on, let’s talk about the characters. There were quite a lot of them! INTO THE SPIDER-VERSE centers around Miles Morales (Shameik Moore), one of the newer incarnations of Spider-Man created in just 2011, who is a young Afro-Latino and son of a police officer. His design was inspired by Barack Obama and Donald Glover. His troubles start off as typical teen stuff. Just trying to survive school and manage a strained relationship with his dad and uncle. I was glad to see Miles starring in his own movie, and loved seeing how awkward of a guy he is on the big screen. Having these flaws and family issues, he was a likeable and relatable protagonist.

The replacement mentor Miles is given is Peter B. Parker, who apparently is the version of Peter Parker that doesn’t have any of his shit together. He’s “fat”, lazy, somewhat irresponsible, and a little petty. I put fat in quotations because his fatness really isn’t all that consistent. You see his oversized belly and love handles when they talk about it, but when he’s up in the air slinging web or anything else when it’s not brought to attention, his extra poundage disappears.

It was positively great to see Spider-Gwen/Gwen Stacy (Hailee Steinfeld) in the film, I love her character. However, I saw this movie a couple of weeks ago, and overtime I found that I don’t really remember much about her that made her stick out like every other spider-person did, including the ones that had far less screen time than her. Her character was so perfectly okay, that she didn’t really shine bright or suck.

Lady Doc Ock was a pleasant surprise. AICN’s current biggest Spider-Man geek Comics Chad (he may have to fight Dannie for that title) pointed out to me that that after she said “my friends call me Liv”, later in the movie Aunt May referred to her as “Liv”. This may have been a callback to a comic arc in the AMAZING SPIDER-MAN, starting at #118 where Aunt May and Doctor Octavius dated. So the implication leaves just enough to the imagination to not really know what that was about, but I think I have a good idea. 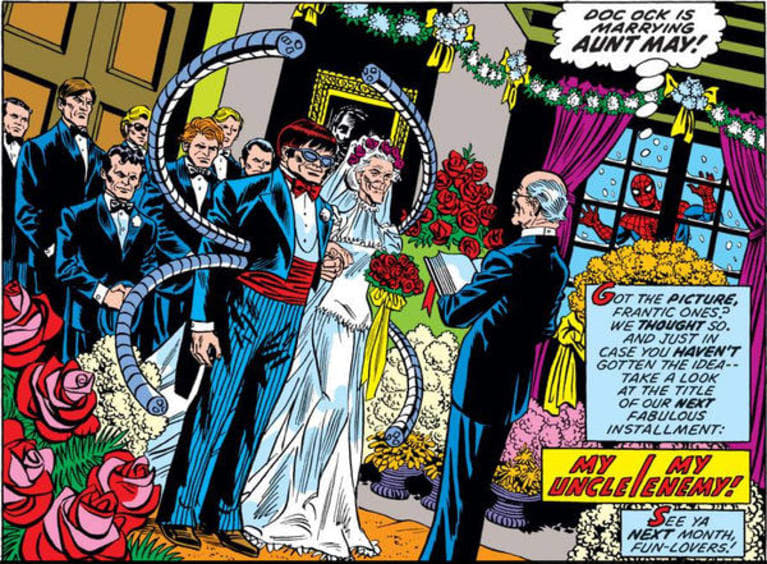 Every character had just enough time and development on the screen that was warranted for them. Spider-Ham (John Mulaney), Spider-Man Noir (Nicolas Cage, and boy was he Cage-y in this), and Peni Parker (Kimiko Glenn) were kind of tacked on, but I’m okay with that. I honestly never thought I’d get to see any of them on the big screen, either!  We don’t get to see a whole lot of them, but what we do see of them speaks volumes about their characters, which leads me into another thing this movie did well.

There are so many characters, there obviously isn’t enough time to develop them fully, protagonists and antagonists. The writers knew just how to summarize things quickly enough, with assuming some knowledge from the audience, and put everyone’s backgrounds in fairly need tiny packages. Hell, I think Kingpin’s motivation was explained in less than 10 seconds, and it was strangely enough. As you may surmise, the movie is quite fast-paced, so it all worked.

This movie contains the best post credits scene I have ever seen, and you are required by geek law to stay and watch it! You will be doing a disservice to yourself by missing it.

SPIDER-MAN: INTO THE SPIDER-VERSE is freaking funny, and you will have a great time. There are also some emotional moments, which kinda got me. Between these two elements, it’s no so much of an emotional rollercoaster, but well balanced. The story is great. Any hardcore Spider-Man fan will love the hell out of this movie!