Freddy Beans here with a review of the new movie from director Can Evrenol, director of 2015’s bug nuts horror film BASKIN. His new film is titled HOUSEWIFE. 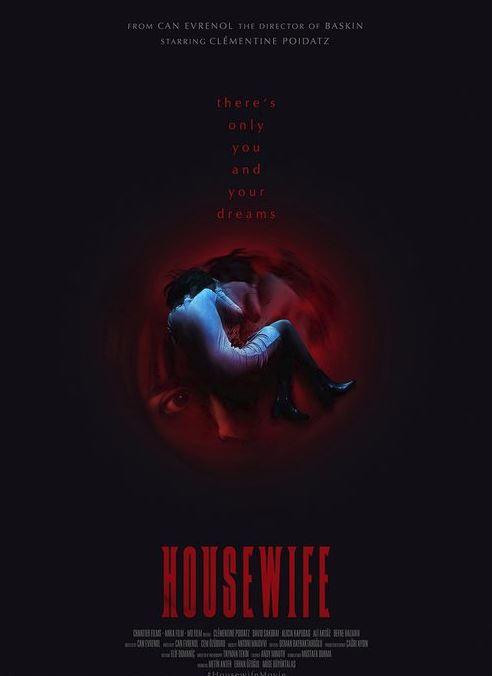 HOUSEWIFE can be cut into three distinct pieces.  The film starts off with Holly (Clementine Poidatz) playing alongside her older sister just before bed.  Their mother walks in, notices the older sister is on her period and escorts her away.  Within minutes Holly has disobeyed her mother and follows the loud noises they are making.  She turns a corner and watches her mom assisting the older sister by drowning her in the toilet.  There’s a chase scene, between the mom and Holly, mixed with some great visuals and then dad comes home.  Things don’t look up as he walks through the door and we are cut into pieces as an audience with Can Evrenol’s choices from there.  This entire opening sequence is fantastic and glues you to your seat. 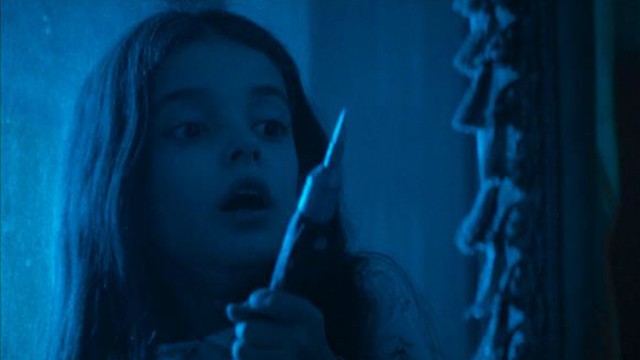 We are shot into the future and Holly is all grown up and enjoying life with her husband.  It’s clear that Holly is emotionally distant and working through something.  She is drawn to a cult called “Umbrella of Love and Mind” and gets tickets to an event with their charismatic leader Bruce O’Hara.  Holly and O'Hara have a closely entwined dance of the minds to begin the middle section of the film. Bruce comes across as a self-help guru but evolves into a sherpa of sorts for the mountainous terrain that is Holly’s stifled memories. HOUSEWIFE slows down considerably in the middle.  I think too much time is spent drowning the viewer in the emotions at play within Holly.  It’s nothing to get worked up about, it just slows what is a huge opening and closing act.

That closing act reminds me of DEAD ALIVE.  It’s not that there’s comparable amounts of gore, it’s that the entire budget comes down to those last 20 or so minutes.  It’s bug nuts craziness (a theme in Can’s work) at the end and I loved every minute of it.  A cult that is either evil or helpful, we’re never sure, a scalping of someone's face to wear a la Leatherface, bloody childbirth, tentacle porn from the sky in a nod to Lovecraft’s Cthulhu, and more all blend into a nightmare of epic proportions.  Like his first film BASKIN, this story is a bit abstract and not necessarily about tying everything up in a pretty little bow.

To sum it up, HOUSEWIFE starts off incredibly strong, dims a bit in the middle and ends with a crescendo you have to see to believe.  Strong acting carries this long walk down a dimly lit hallway of cinematic nightmares. Clementine Poidatz gives the performance of a lifetime in a baring role that few would be able to pull off.  David Sakurai (LIZA THE FOX-FAIRY) is the other standout, playing the leader of the enigmatic cult.

Can Evrenol has proven himself to be an adept master of a visceral visual experience.  HOUSEWIFE doesn’t disappoint.  It’s a bit of a slow burner after that opening but it blows up into something hard to forget by the end.  Without the acting to carry out those middle scenes it might not worked as well as it does.

Can has said he picks his actors by who he would like to be friends with.  It’s working well for him so far, as they more than competently carry this film through the optical wonderland Can has built for the film’s closing act.  HOUSEWIFE is a slow descent into a confused soul before exploding with unexplainable gleefulness into a darkly bloody nightmare you'll want to wake from.

7 out of 10 cult followers are there for the free cookies.