Roni here, taking time out of my skincare routine to let you know about one of my favorite films of Fantastic Fest 2018: Danishka Esterhazy’s LEVEL 16!

A dystopian thriller, LEVEL 16 is set in some kind of indeterminate institution for young girls – part finishing school, part orphanage, part black site – where a group of girls with creepy Hollywood Golden Age actress names (Ava, Vivien, Rita, and Sophia) are indoctrinated in the feminine virtues: cleanliness, obedience, sweetness. As they await placement with their longed-for forever families, the girls are moved from level to level, watch the same movie every Wednesday night, and are overseen by the equally creepy Miss Brixil, played by Sara Canning.

Esterhazy said the vibe she was going for with this was “Jane Eyre meets Logan’s Run” and she certainly succeeds in creating that atmosphere. The run down institution, a decrepit warehouse hung with threadbare flowered curtains in some pathetic attempt to be cheap and cheerful, makes you want to crawl out of your skin. And when Miss Brixil shows up with white lace dresses with the girl’s names embroidered on them, and tells them to wear them to bed “as a treat,” we learn that these girls can’t even read their own names. Something is very wrong here, and we’re about to find out what it is…

Comparisons with “The Handmaid’s Tale” are inevitable, and Esterhazy says that the success of Handmaids did make it a easier for her to get her dystopian vision greenlit. But aside from the fact that it’s sci fi and has a largely female cast, the story is quite a bit different. More adventure than fable, the heart of the film is female friendship – specifically, the friendship between Vivien and Sophie. Despite deliberate attempts by the institution to discourage such friendship, Vivien and Sophie must overcome their mistrust and forge a real bond – a story that we don’t get to see onscreen very often. There are about a billion cinematic paeans to teenage male bonding out there, but LEVEL 16 is something different: a story about female friendships, and how they create life-saving bonds. 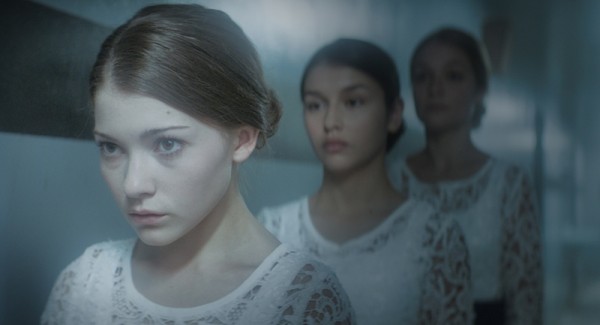 Katie Douglas is terrific as Vivien – and channels some Vivien Leigh into her performance without feeling phony. Celina Martin also brings a sincerity and rawness to Sophia that is great. But Sara Canning as Miss Brixil is perhaps my favorite performance here. When Miss Brixil first appears, she’s terrifying. Ruling the school in her leather pencil skirt like an S&M Nurse Ratchet, when she silences the room with a look, she carries the full weight of “spending a night in the box” in that glare, and you believe it. But as time goes on, Canning elevates the performance and gives us some private moments with Miss Brixil that show us another, human and poignantly relatable side. She’s not just Aunt Lydia; she’s a collaborator, yes, but one with a story of her own. It speaks volumes about Esterhazy’s chops as a storyteller and a filmmaker that she makes us care about Miss Brixil, too.

To be honest I was seriously confronted by the message about trust between female friends, here. I don't want to spoil anything, but the plot continues to go in surprising directions as the girls make a run for their freedom.

LEVEL 16 made quite a splash at Fantastic Fest, but plays tonight at Vancouver International Film Festival. Hopefully we’ll see this on streaming soon. God knows that Hulu needs something to recommend after “Handmaid’s Tale,” other than “Desperate Housewives.”