Bruce Campbell is Savage AF at Fandemic! Big Eyes Saw It All! 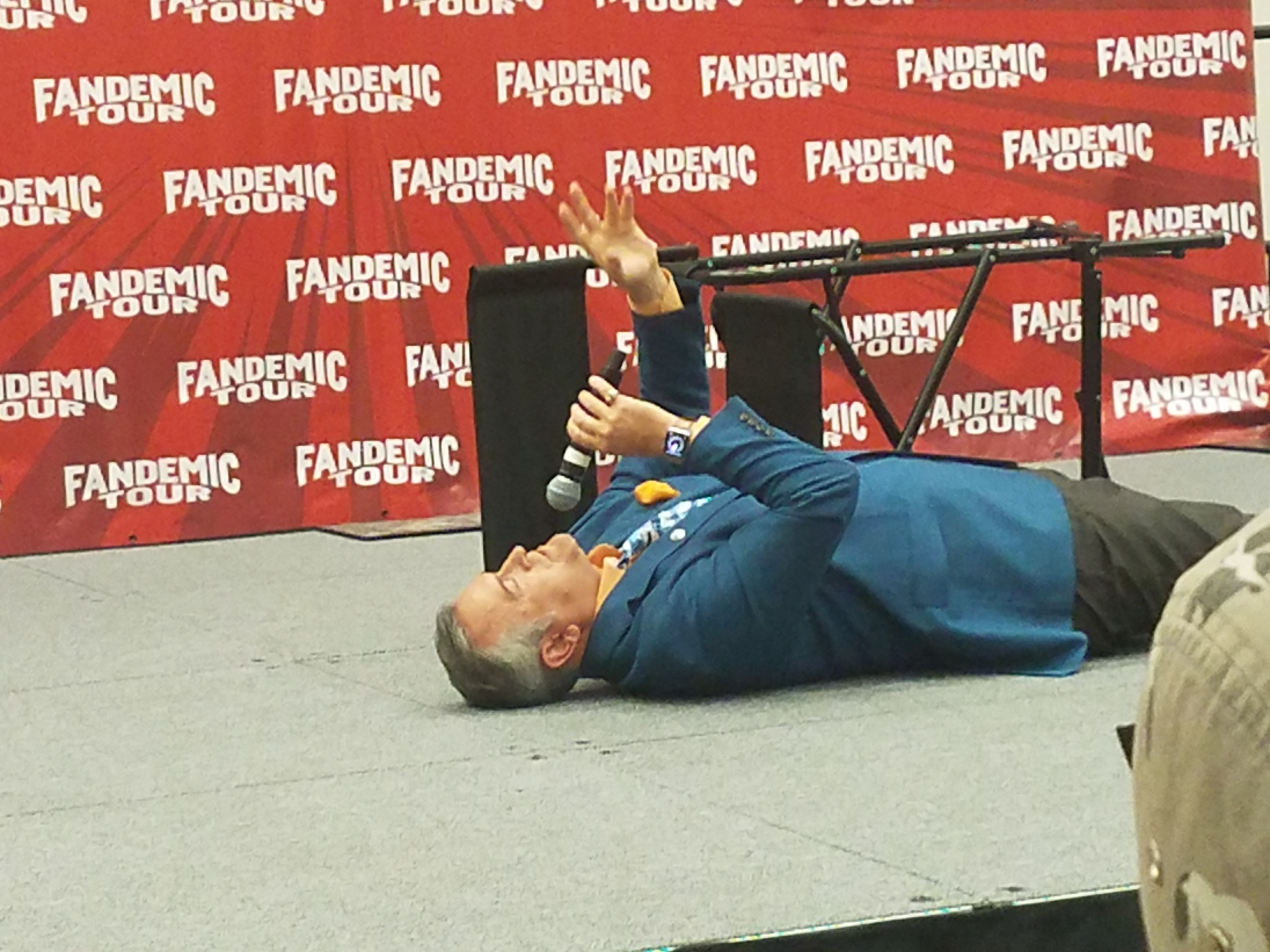 So I’m writing today to let you all know that Bruce Campbell is 100% worth going to see at any convention, perhaps even, ANY TIME?! I, Big Eyes, caught Campbell at Houston Fandemic last week, and he was a riot!

He stood before us on the stage, showing off his impeccable taste in fashion, wearing a teal suit with a coral handkerchief. That single eyebrow of his seems to be permanently raised, as though he’s always on the offense for Deadites. Campbell shared with us that he a “poofer”, as in he prefers to poof the handkerchief in his front pocket. He was also proud to share with us that he is capable of dressing himself because “not everyone in Hollywood is helpless”.

Mr. Campbell began his panel by making everyone stand up and exercise briefly before we started so that the “questions will now suck less since everyone is awake now.”

“Do you ever get tired of answering the questions of pinheads?” one Fandemic goer asked him.

Mr. Campbell took a breath and replied “Only the self referential ones.”

He took a question from a young woman in the back.

“My father wanted me to ask you this: Is Gabrielle Anwar as hot in person as she is in BURN NOTICE?”

Bruce Campbell could have given a simple yes or no, but instead he decided to take things much further. He had this girl come up to the stage and call her father. This is how the phone call went:

Of course, Rob called back immediately.

Rob calls back a second time. Campbell places the mic near the phone speaker so everyone could hear. After the “hahas” are put aside, Rob takes his chance and asks “Is Gabrielle Anwar as hot in person as she is on BURN NOTICE?”

Bruce hands the phone back to the woman and says “Yes,” as a sort of afterthought.

The next question comes in. “What do you plan on doing after this?”

Campbell: “I’ll be going back to where I live in Oregon to do jack and shit.”

Moving on, Mr. Campbell decides to educate us on what it is like to act with the dreaded “tennis ball on a stick”. He got an aspiring actor from the audience on stage. Campbell directed him to “look over here, say this, and then look over there”. But the look has to be longing. Oh so longing.

I don’t want to give away too much of what he does at his panels, because I’m sure he has done a lot of those same things at every one. He knew exactly how to hold the mic to the phone without it being too close for feedback.

Anyways, I had a great time at Fandemic, the Bruce Campbell was certainly the biggest highlight there. At least, in my mind. But at the back of my mind was that Dave Bautista was also there signing autographs with no panel lined up. If you’ve been following the news on GOTG 3, it’s no surprise that they weren’t letting him speak.

There was a panel with Sean Gunn talking GOTG, coverage on that is coming up!

But for real, you guys. Check out Houston Fandemic next year, it’s a great time!