"SMALLVILLE in Three Acts" - A report from FANDEMIC Houston

This past weekend’s Fandemic Tour stop in Houston was home to many wonderful experiences, but none as unlikely as the Smallville panel featuring Tom Welling, John Schneider, and Michael Rosenbaum, moderated by Clare Kramer. The timing of the panel seemed to make little sense as the show finished its run over seven years ago. I suppose one could make a case that it lines up with the launching of the DC Universe streaming service and that could be a good fit, but that one would be wrong because it’s not streaming on DC Universe so shut your cake hole. 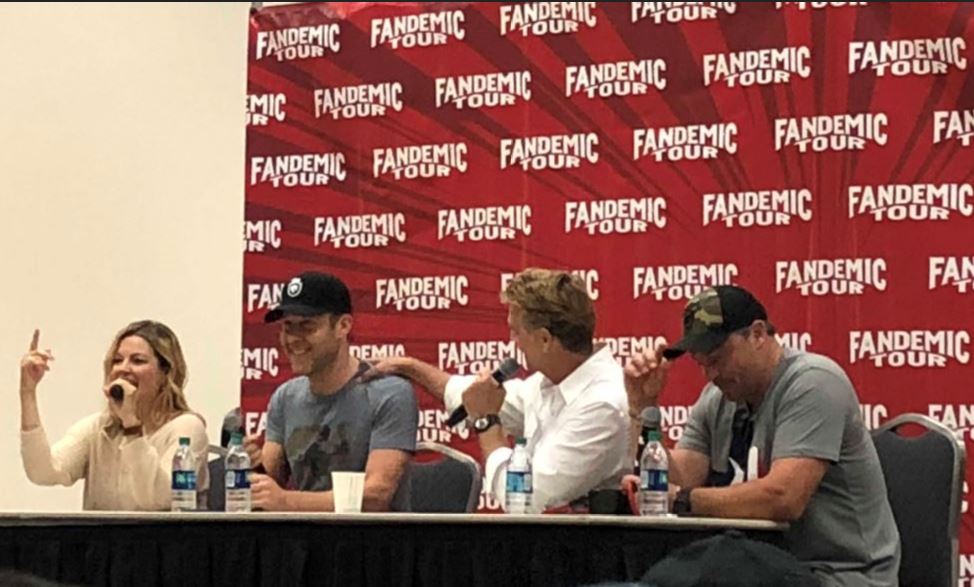 Additionally, according to the Fandemic Tour programming schedule, James Marsters (who played Brainiac in several seasons of the show) was set to appear but did not, and curiously Clare Kramer was scheduled to be leading a separate panel about kids of Con-going parents at the same time in another room. How she ended up as moderator of the Smallville panel is a mystery, and I never got any answer as to what happened to Marsters.

All that mystery aside, what we were treated to was an utter delight, fueled chiefly by Michael Rosenbaum’s ageless class clown persona. After Kramer questioned Schneider on his “Dancing With the Stars” prep, it was Rosenbaum who demanded that we see a few steps from his repertoire. Schneider waved off the invitation until finally sweeping up Rosenbaum, himself, and taking him down center-stage to perform a brief Foxtrot. Then the trio set into answering a few fan questions, which they occasionally did without laughing. 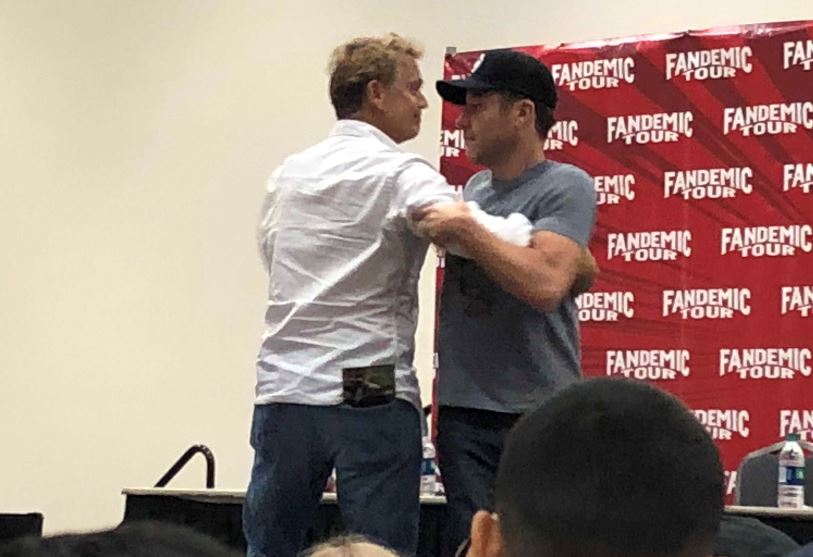 “There was really little to know about Johnathan when I took on the role,” explains Schneider of his character Pa Kent. “So when I read the pilot I thought Miles and Al did an amazing job of writing a fantastic father, kind of like Uncle Jesse. ( A clear reference to his time on The Dukes of Hazzard, which got quite a rise from the crowd.) A touching, hands-on kind of guy.”

At this point, Rosenbaum begins digging his fingers into Schneider’s shoulder in an exaggerated fatherly manner, the laughs of the crowd growing over the answers to the questions they, themselves, sought answers to. Schneider goes on to commend the pilot writers’ efforts to make Johnathan Kent a reasonable man who doesn’t make decisions for his adopted son but shows him paths and allows him to make his own. To which Michael Rosenbaum interjects “You judged me! You judged Lex based on his father! That’s a bunch of B.S. I watched some of the episodes and I always felt like Gosh, you’re going after me, when… Just, you know, give me a chance!”

Immediately following this exchange, Rosenbaum leaps from the stage to turn turn around a 4’x5’ portrait of Welling’s face, exclaiming “I can’t look at your face while I’m looking at your face!” to which, of course, Welling responded by leaping down after him and bringing the portrait, along with a matching depiction of Rosenbaum, and setting them on stage in front of the table so that the audience can see them as well as the real-life stars. Rosenbaum retaliated by positioning his body before Welling’s portrait and rubbing his groin on the portrait. And there was much rejoicing. 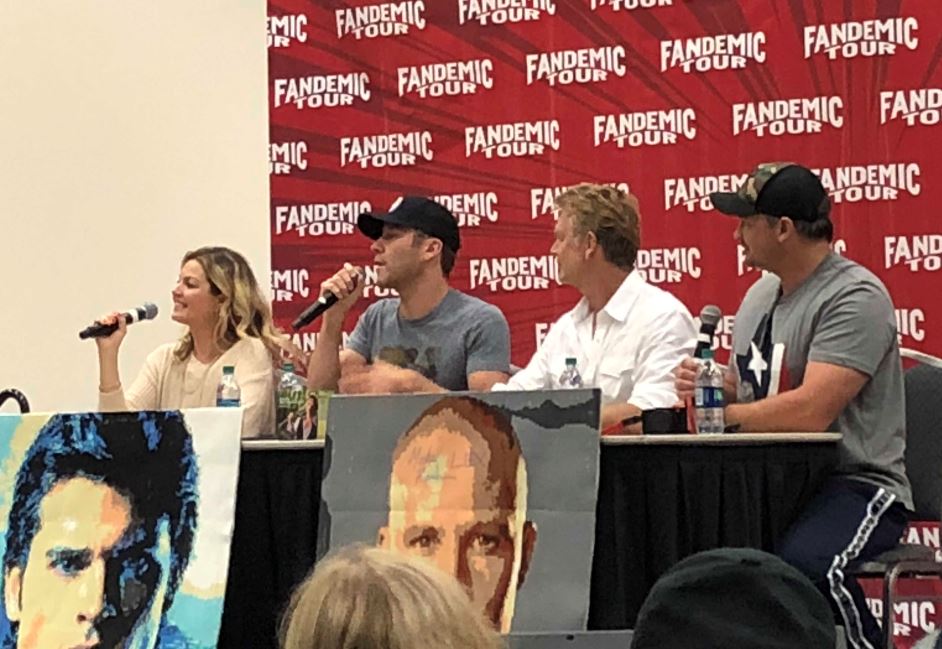 When asked if they knew immediately, within the first season, that they were in a hit show destined to run ten seasons, Welling took point to explain, in a manner of speaking, yes and no. “There’s no way your show is going to go on to the next episode, to be honest. Technically, after each season, you are technically cancelled until you’re renewed by the studio. So you never know. Even though there were years when we were the number one rated show on the CW, they were still like ‘Yeah, but we’re just not sure…’ And so you’re always in a constant state of flux.” While saying this, Michael Rosenbaum is rubbing some sort of cream on the back of John Schneider’s neck, then his own. Schneider chimes in “I was the veteran at that time, and I had never read or seen a better pilot til that came along. It was fantastic! In my perspective, if Smallville didn’t run past that first year then there was something wrong with how they were selling it or there was something wrong with the world, because there was nothing wrong with Smallville.”

Welling then took the opportunity to remind us that without Smallville, “You wouldn’t know Jared [Padalecki], Jensen [Ackles], Stephen [Amell]...” In that point he is absolutely correct; Smallville launched the careers of many actors who still appear on the CW to this day, and has given us some of our most accomplished stars.

Fans asked predictably fan-centric questions, which gave Tom Welling the opportunity to tell a long, engaging story about being flown to the top of a glacier to film the cinematic closing scene of Season 4. After really hamming up his ordeal, Rosenbaum chimed in with “I got dropped on a glacier. Same thing. Worked for three days; risked my life; never used the footage.” 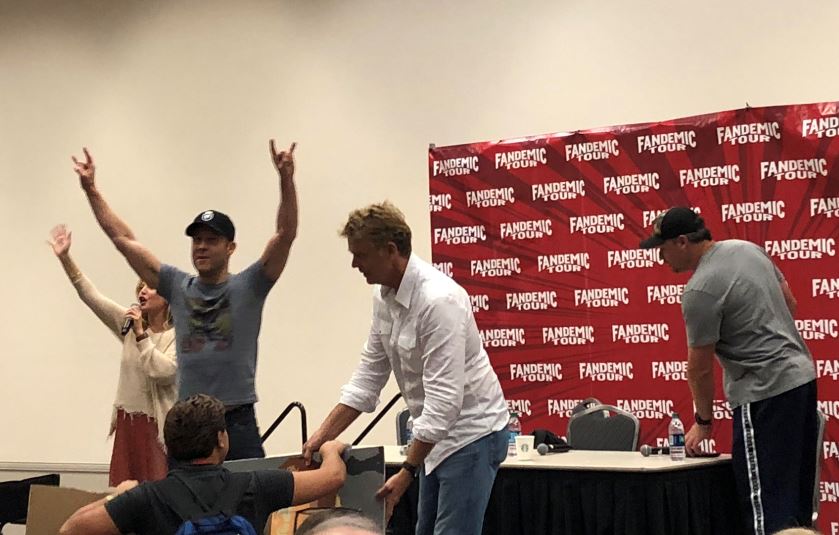 Michael recalled tormenting their Director of Photography Barry Donlevy on location in Whistler, British Columbia: “He’s in [the shower] lathering up … I got completely butt-ass naked and I creeped into the shower, this big shower, and I just whispered into his ear ‘Could you pass me the Irish Spring?’ and he jumped ten feet in the air! To this day, people go up to him and go ‘Hey, what about that Rosenbaum shower thing?’”

A fan asked Schneider if he could still belt out the “Yee-haw!” from his Hazzard days and damned if he didn’t holler it out just fine. Rosenbaum goaded to Welling into try his hand at it, which he did and it sounded quite spectacular. When the two asked Rosenbaum to give it a shout, he replied “Hell no!” to riotous laughter. As the next fan began to ask her question about social media in the era of Smallville, Rosenbaum cut through her delivery with a delayed “yee-haw” that brought laughter once more.

The panel touched on such topics as the #SaveLucifer campaign which saw Tom Welling and his new castmates plucked from cancellation by Netflix, working alongside Christopher Reeve, each individual’s turn at directing episodes of the series, Welling shooting a fight scene with WWE wrestler Kane, the three days that Welling missed due to illness (Welling: “I was sick and I couldn’t fly.” Schneider: “You couldn’t fly? Could you leap?”), and Tom Welling’s grueling season 1 work schedule. Anecdotes ranged from Rosenbaum being directed in a kissing scene with Kreuk (“Could you kiss her like a man?”), Rosenbaum riding in the General Lee with Schneider, and their favorite episode; they all said “Pilot.”

As time ran down and Kramer demanded the questions cease, Rosenbaum leapt from the stage and went to the handful of remaining fans and asked them their questions in the most rapid fire sense imaginable. When one asked how they transitioned from Smallville to their current projects he quickly muttered “I grew out my hair” and moved to the next guest. As it came to a close and Kramer invited him back to the stage so that the crowd could take pictures, Schneider said what we all were thinking:

“This is what he was like all the time on the show.”

As a fan full of delight at the youthful exuberance of it all, I can only hope so. 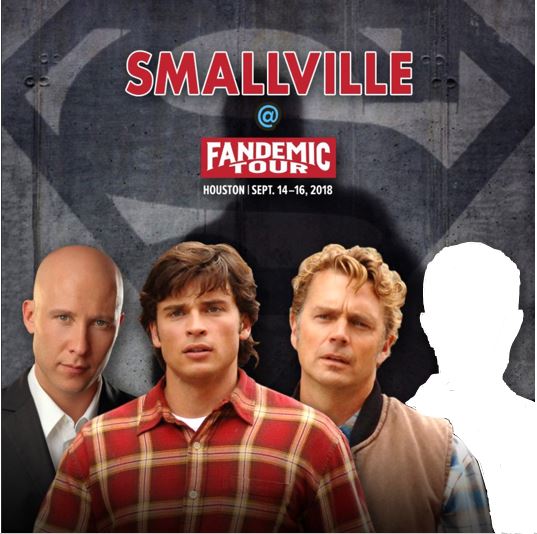 Michael Rosenbaum is currently recording his podcast “Inside of You” available on iTunes.

Tom Welling is acting in and directing episodes of Lucifer for Warner Bros on its new home at Netflix.

John Schneider is currently starring in OWN’s “The Haves and The Have Nots” and will be featured on this season’s “Dancing With the Stars” on ABC. 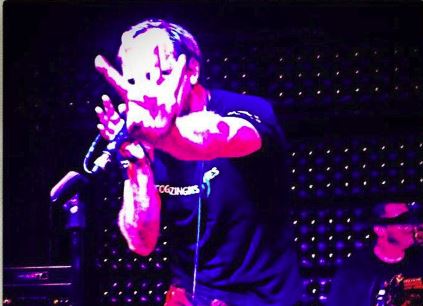