Hello all, this is Mad Dashiell here and joining us today at AICN is comic creator Sean Wang.

Sean Wang: Hey Mad Dashiell! Happy to be doing an interview with you for AICN!

MD: Thanks for joining us!

SW: Thanks for having me!

MD:  I have been a big fan since I saw the first trade of Runners. Tell us how long you have been working on comics?

SW: I got my start way back int he mid-1990's working on THE TICK comics for New England Comics. I wrote and illustrated a few seasonal specials and then the 6-issue TICK AND ARTHUR series, where they joined a dysfunctional super-team. That was a lot of fun, but ultimately I felt the siren call of doing my own sci-fi action-comedy, and that's when I started seriously producing RUNNERS.

MD: That is amazing, I am a massive fan of the Tick, I reread the original comics until they fell apart. You have a degree in architecture as I recall from talking with you at a convention ages ago. When I look at your work, the ships, the rooms, and buildings blend seamlessly like I am looking at Katsuhiro Otomo artwork. What can you tell us about the effect your architecture degree had on your work in comics?

SW: It's weird. I'm not sure if architecture had an effect on my ability to render environments or if I had a knack for that sort of drafting that led me to architecture. I think it's the latter. I always loved drawing but didn't think being an illustrator was a viable career, so I went into architecture. But ultimately, I realized that I had no real passion for designing buildings, and my real interest was in storytelling.

MD: Can you tell us a bit about the genesis of RUNNERS?

SW: Sure! I was basically looking for penciling work in the industry back in the mid-1990's when I realized I wasn't all that into the actual stories being told. It was the era of dark and gritty comics, and I was more interested in doing something fun and entertaining. It's hard to imagine at this point, but it was also a time when Star Wars was pretty non-existent as the prequels had not even come out yet to rejuvenate interest in the series. So there was a real lack of fun sci-fi adventure and that was the kind of story I personally wanted to read. So I decided to write my own story about a crew of alien smugglers!

MD: In a nutshell, or a galaxy not so far far away, what can you tell the readers about RUNNERS without spoiling anything?

SW: Basically, RUNNERS is a fun, sci-fi action-adventure about a crew of alien smugglers trying to get by in the criminal underworld of the galaxy. They start out doing runs for the mob but get in over their heads as the jobs spiral out of control with bounty hunters, pirates, rival mobsters, and the police! The first two volumes are mostly self-contained stories, but there are many seeds being planted for the much larger story to come. And while there is plenty of action and drama, I am a firm believer in comics being FUN, so there is always an overall vibe of fun and adventure to the series, accented by likable characters and entertaining banter. Most people have described it as Star Wars meets Firefly, which I think is a really good way to sum it up!

MD: That is a really good comparison, Star Wars meets Firefly. So do you have any help in the creation process of RUNNERS? Be it letterers or colorists, anything, or do you fly this ship solo?

SW: Solo! Also, another good comparison, as I often describe RUNNERS as the adventures of an entire crew of Han Solos by way of the cantina aliens! But yes, I do the entire thing myself: the script, pencils, inks, colors, lettering, and promotion. It's a colossal amount of work, which is why it takes a while to get each new book finished. But in the past, I was doing it on the side of full-time work, and this time around, I plan to do RUNNERS as the bulk of my workload, with smaller freelance jobs on the side. Having plotted out the entire 10-volume series now, I am gunning to keep going and tell the whole story in a reasonable amount of time! By the way, for the record, while I do all the comic production myself, I do want to call out my wife Peggy, who is amazing at helping me out on many fronts, especially with things like the website, online store, the video for my Kickstarter, and various technical and planning logistics. She's an amazing partner to have on this crazy comics journey!

MD: That is pretty amazing, sounds like you could write a book on how to make and distribute your own comic. What advice would you give to someone wanting to begin making a comic on their own?

SW: Ha ha. I'd probably write that book a few years down the line when I feel like I have a more solid grasp on the distribution part. It's still a struggle trying to build an audience and increase visibility. To be fair, I had taken the past several years off to do freelance, so that didn't really help my RUNNERS profile. But the plan is to remedy that going forward. So I guess that would be the biggest piece of advice: plan for a consistent, regular, and prolific production schedule. Some readers are willing to wait for content but many others will move on to something else. So it's good to keep the content coming as often and as regularly as possible, so readers feel like they can get invested in your series, long-term.

MD: Speaking of long-term, are there any other projects on your horizon you are comfortable with mentioning to the AICN readers right now?

SW: I actually don't have any other projects on the horizon, other than finishing RUNNERS. I imagine that will be a 10-year project alone! So I think I'd rather focus all my energy on that and not get distracted with too many other long-term plans.

MD: Speaking of, I understand you have a Kickstarter currently going, would you like to tell the readers anything about that?

SW: Absolutely! I've been working on RUNNERS for a long time now, off and on, but it's going to be "on" much more so going forward. It started with Volume 1: Bad Goods and was followed by Volume 2: The Big Snow Job. I then took a bit of a hiatus, and during that time, plotted out the entire remainder of the series, Volumes 3-8! So I now know all the major plot turns and characters arcs and I also have Volume 3 fully scripted and ready to go into concepting and production. But Volume 1 was done in black-and-white way back in the day. I know that can be a deterrent for some comic readers and I want to pull in as many people as possible going forward with the series, so I decided to go back and color the entire first book. It will now also match the look of Volume 2 and all future books, which will be in color as well. I just launched a Kickstarter campaign on May 21 to help fund the printing of the new color version of Volume 1. I'm really excited about finally having the first story in an art format that fully matches the other books, and while a lot of RUNNERS fans really liked the original b&w art, I know a lot of them have been wanting to see that story in color after having read the second book that way. So it's great to be able to deliver that to old fans and establish an even better jumping-on point now with new readers! You can check out the Kickstarter for RUNNERS Volume 1: Bad Goods here: https://www.kickstarter.com/projects/621975803/runners-volume-1-bad-goods-graphic-novel-in-color
RUNNERS Volume 1: Bad Goods - Graphic Novel - IN COLOR!
The highly acclaimed sci-fi adventure series gets an upgrade! Volume 1 now in COLOR!
kickstarter.com

MD: Let's all go check for that link right now, It has been a pleasure having you with us today, is there anything else you would like to let the readers know in closing?

SW: I guess I'd just add that the Kickstarter runs until June 24, so if you like sci-fi comics or just fun adventure stories in general, please check it out and help support the project. If you're on the fence and want to see more, or if you're on a tight budget but curious about RUNNERS, the entire series is also available as a webcomic, and you can read everything for free at www.runnersuniverse.com. So if you want to sample the story before pledging on Kickstarter, or if you want to read the entire thing online, I'm just happy getting more readers either way! I'm very confident in saying that if you give it a try, you won't be sorry! Thanks so much for having me for the Q&A. It's been a blast!

MD: This has been Sean Wang, thanks again for joining us at AICN!
- runnersuniverse.com
Welcome to the critically-acclaimed sci-fi comic Runners! Here you'll find the first two graphic novels in their entirety, along with bonus behind-the-scenes commentary for most pages. The graphic novels (and other goodies) can also be purchased from the Runners Store. Enjoy the read!
runnersuniverse.com 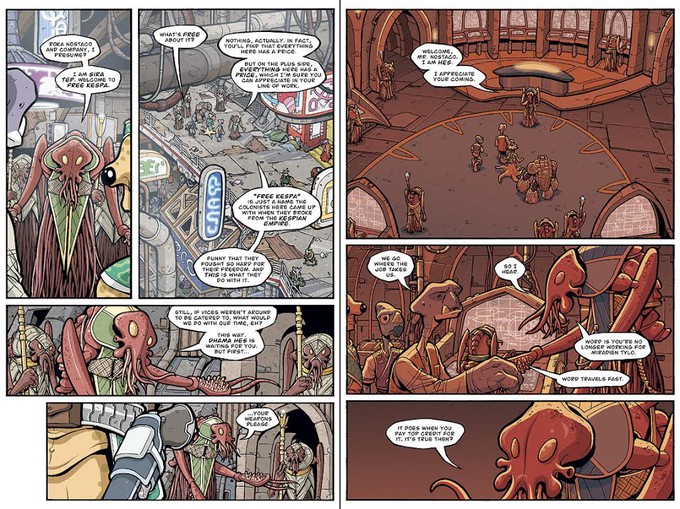 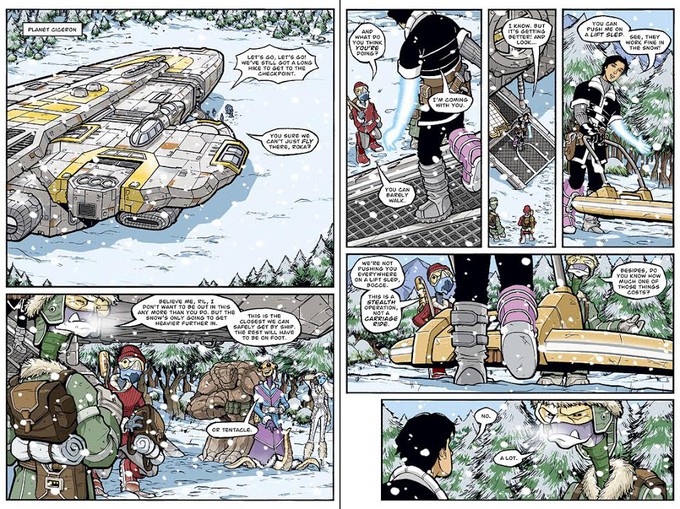 -Thanks again for joining us, readers. -If your working on your own comic or a Kickstarter comic project hit me up on Twitter. Thanks for joining me today, this is Mad Dashiell signing off. 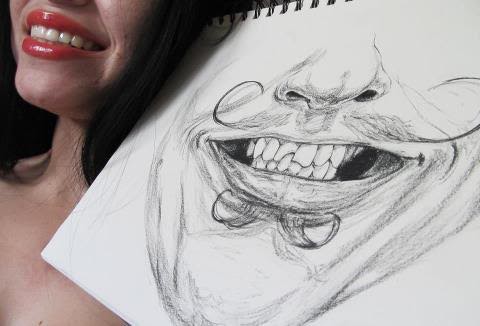