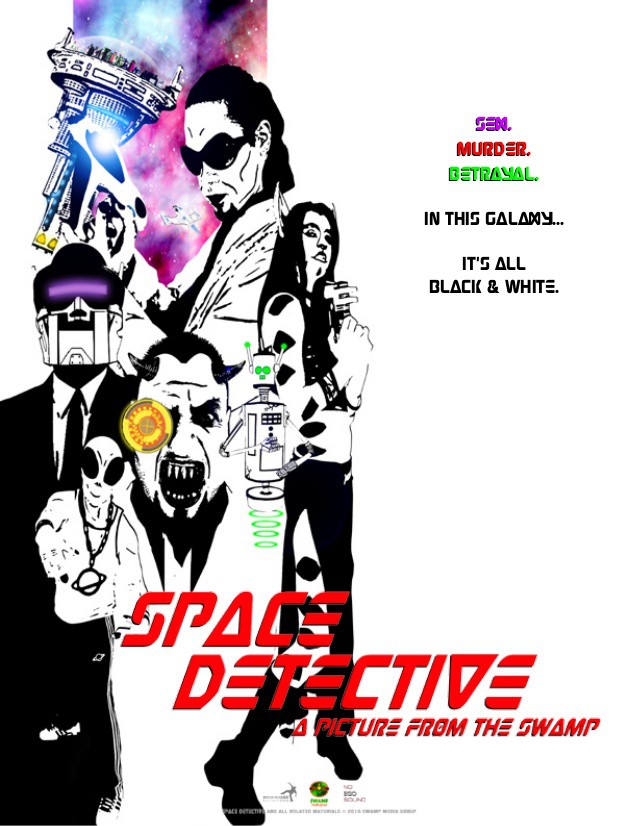 A cynical detective is contacted by an old flame to save her from her hellacious demonic husband. His journey entails excitement, danger, and gangster aliens. SPACE DETECTIVE is a science fiction take on the crime noir genre, full of voice-over narrative as Space Dick Shiro (Matt Sjafiroeddin) navigates through a modern day Las Vegas type mega space station named Korenadon to steal a data pad from some bodacious bad dudes.

I simply get lost in Shiro’s words as he describes Korenadon. His dialogue alone makes the film. The soundtrack is spectacular as well. This film may follow a typical crime noir perfectly but writer/director Antonio Llapur manages to make the genre his bitch. Although the special effects may be lacking, he still carries out a decent rounded piece. This isn’t your typical drama but a parody that asks the question, how would a fearless but haunted private eye solve cases in the future?

There are tons of silly punchlines, fight scenes, and strange dog related music videos and commercials to keep you guessing where this film will take you next. The film lost me for a bit during the middle but caught me at the end. With this film, you see how ambitious the writers became, which shows in their editing choices. A few scenes should have been cut and shortened but if this film is taken at face value, it is a decent sci-fi flick.

This film won Best Science Fiction Feature Film and Best Soundtrack at the 2017 Miami International Science Fiction Festival as well as Best Narrative Feature at the Mammoth Lakes Film Festival in 2017. I have to agree on that award. Best narrative indeed. I look forward to future escapades of Shiro and Abby, his plucky sidekick.

Check it out if you get the chance.

This is Madame Revenant signing off saying, be adventurous and traverse the unknown!