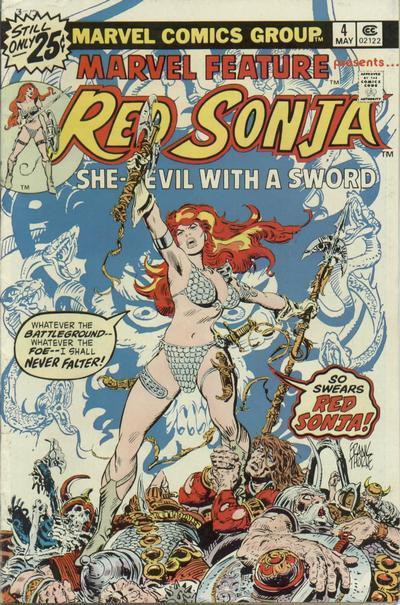 Ok, so I am truly and utterly geeking the FUCK OUT!!! The announcement had been made yesterday morning via Deadline.com that Millennium Media will be producing and financing (a dream love project of my lifelong fandom) a "RED SONJA"  the film and the producers are hoping it may become a franchise they can not only inspire with but also take to the bank! Thank you "Wonder Woman" for showing the bean counters at the studios that a female superheroine can succeed as a stand-alone kick ass, as well as an obscene money-making kick ass investment! 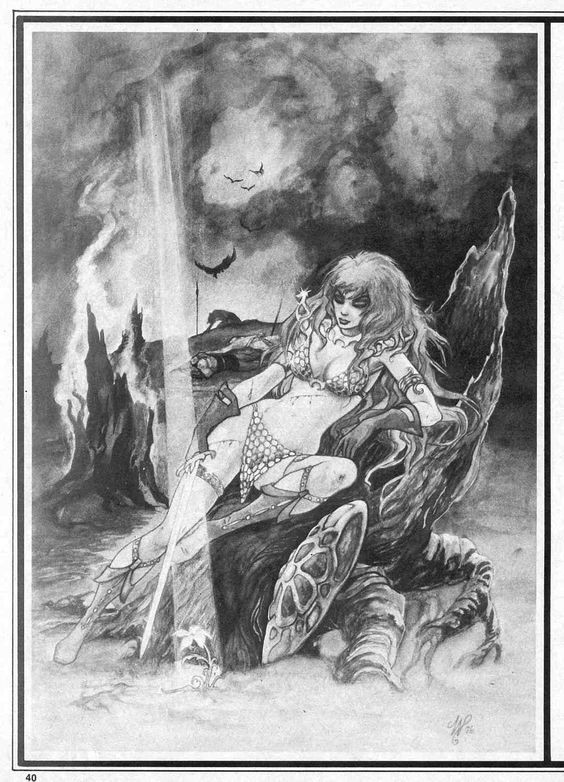 The production is being overseen by Avi Lerner ( produced: "American Ninja 2-3", "The Expendables 1-3 and the recently announced "The Expendables 4", as well as "Expendabelles", older goodies are "The Wicker Man", "The Black Dahlia" and 2011's "Conan the Barbarian"),  Joe Gatta ( executive producer on "Horns" "Out of the Furnace" also produced 2011's "Conan the Barbarian"), Mark Canton (who produced- "Get Carter", "300", "300: Rise of an Empire" and "Escape Plan") and joining them as a producer announced on the project is Courtney Solomon ("Dungeons & Dragons" from the year 2000 and he is currently listed as producing another D & D flick, he also produced "An American Haunting" as well as "Getaway" and "Captivity"). I truly hope these producers listen to what the creators and real hardcore fans have to say, like me, this character is one I have known all my life and one I truly believe is needed, with all that is going on it is only proof women need a more, brutal heroine, a take no shit, "fuck you and the horse you rode in on" mentality... sorry if I offended anyone or their Mama's but at the same time... I believe this is an unrelenting Heroine we should do our absolute best to keep not only strong, and beautifully fierce, but human as well, especially in her origins! 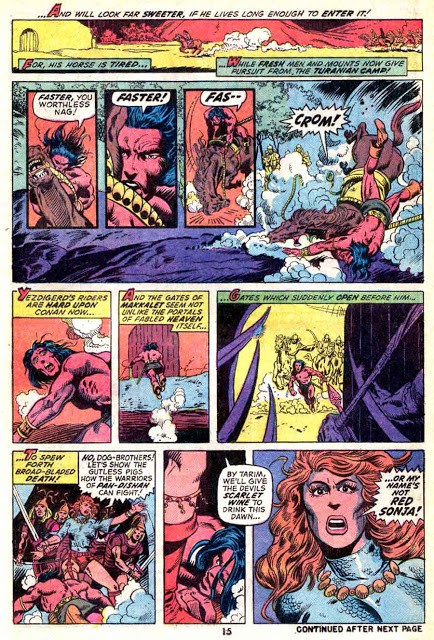 It is being said they are seeking out writers currently, I would like to suggest my dream team in combination with theirs (Whoever THEY may end up being)  the original comic creators still living (Roy Thomas and Barry Windsor-Smith if available) and Wendy Pini yes! The Wendy Pini we all know and love for bringing us the Independently Produced Epic Masterpiece, "ELFQUEST" with her husband Richard Pini! However very few know her as my family and I do. She was one of a handful of the first of what nowadays is popularly coined as "Cosplayers", and she was crowned the first official Red Sonja for year after year... See the jaw-dropping picture below of her :) Also she wrote some of the Red Sonja comics, via the comics creators (Roy Thomas and Barry Windsor-Smith), reactions to her cosplaying, she did not just inspire the physical embodiment of Red Sonja but also the mentality/attitude they were looking for. It was recognized after seeing her performances and her writing for stage characters... They knew she was "RED fuckin' SONJA!!" and they invited her on as a writer for "Red Sonja" #6 the Comic, talk about dreams coming true fan wise! 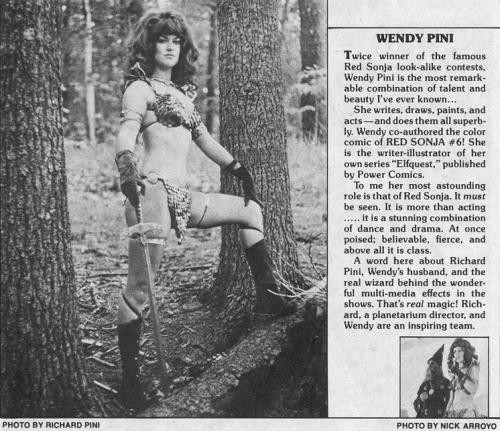 She (Wendy Pini) is my Red Sonja! (Yes I know she is too old for the role the role now) However, the anger, confidence, wit, and sexuality being at play within her performances, as well as the pages of those comics were well, inspiring, to say the least... In my tom-girly opinion... I fell in love with Wendy Pini's work in 1993 stumbling upon a group of ELFQUEST comics at my Dad's. He immediately said as he handed them and more over while stating "You should really read these!" I did read them, all that we had! Windy and her hubby Richard (aka-WARP aka- Wendy And Richard Pini:) are masters of art, writing, and character development! Also, their love for theatrics is insanely cool! See the video below for their live performance from way back! 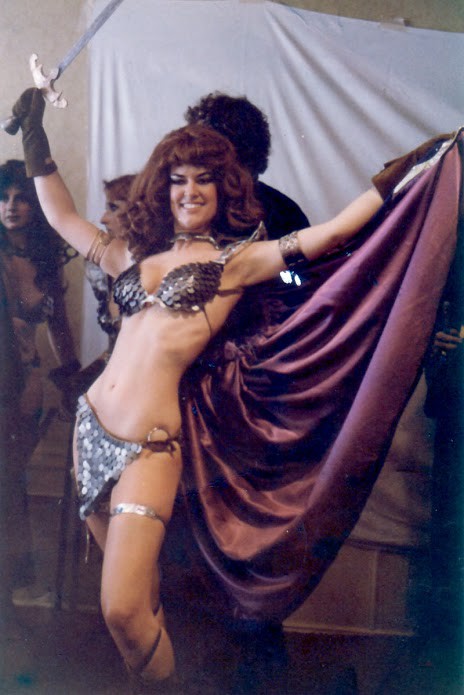 Red Sonja's original 1973 comic book (by Roy Thomas and Barry Windsor-Smith) was inspired by the 1934 short story and primal origin of "Red Sonja" the character that inspired them was "Red Sonya of Rogatino" from the short story "The Shadow of the Vulture" by Robert E. Howard (writer of 1932's "Conan" pulps and the later novel series) In Comics it has since been rebooted in 2014 and they changed her original origin. (I have issues with 2014's but that's another rant for later on in the article) 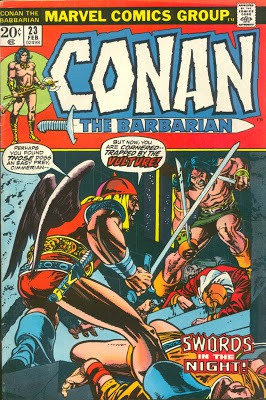 The origin via 1973 is... Red Sonja at seventeen years young- her village in the Hyrkanian Steppes burnt, her family killed horrifically, burnt before her eyes, and she was brutally raped and left for dead, as she screamed for vengeance the Goddess Scáthach (aka Sgathaich based on Scottish and Irish Mythology) answered. The Goddess a Celtic Mother bear-like figure, a warrior, a symbol of eternal strength, endurance, art, magic, and kinship who offers protection as well as victory to those worthy enough to bless... Red Sonja was more than worthy. As the literal translation of the Goddesses name translates into "She who Strikes Fear" it is more than fitting for the She-Devil with a sword, Red Sonja to be blessed  by as long as in total agreement on the only condition the Goddess set, that she would not love or be intimate with any man unless he bested her in combat. 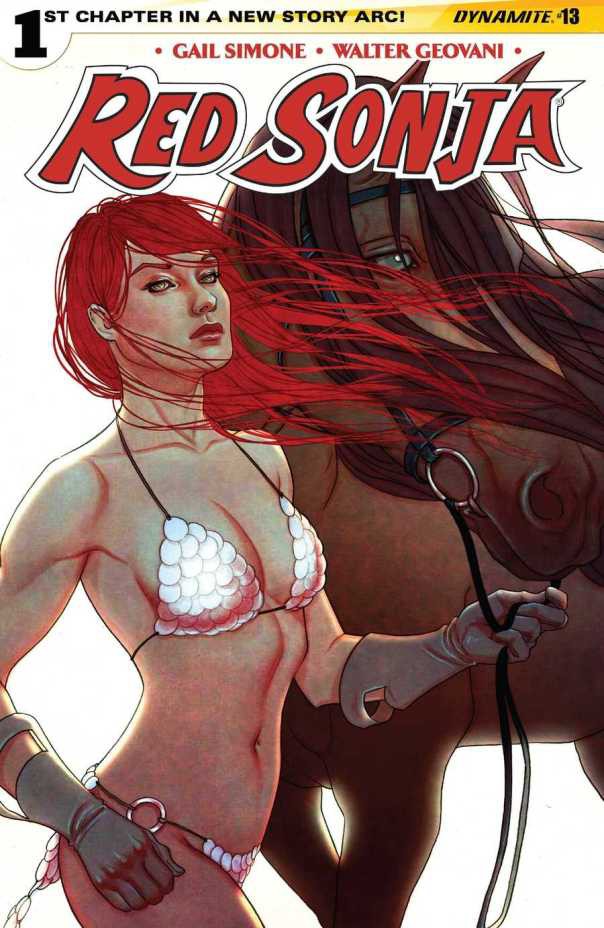 2014's version she was not raped (that's nice)  but enslaved for years for minimal armored gladiatorial combat entertainment, they also cut the Goddess aspect out (because WHY??? I need to ask?). They basically made Red Sonja a normal human who learned to hunt, scavenge, and kill on her own in a "forest" after escaping to the "woods" while her family is slain, a much more unbelievable origin to me, seeing as it goes against her personality to have any cowardliness...slavery, barbarians, no raping and pillaging affecting poor angry Sonja, no Goddess hallucinations!?! C'mon in no way does that improve her story, it subtracts and leaves a hole in her character development.  Also realistically and statistically speaking less per capita of females become gladiator slaves than are raped ever now or before in recorded history. I like vengeance, I think it is why I liked Kill Bill so much, life is hard for warriors in films.... Its why I truly want Wendy Pini and someone fierce and unafraid to tackle this story and not sugar coat it. Red Sonja should be rated motherfucking R, a hard R at that and have a directors cut later. 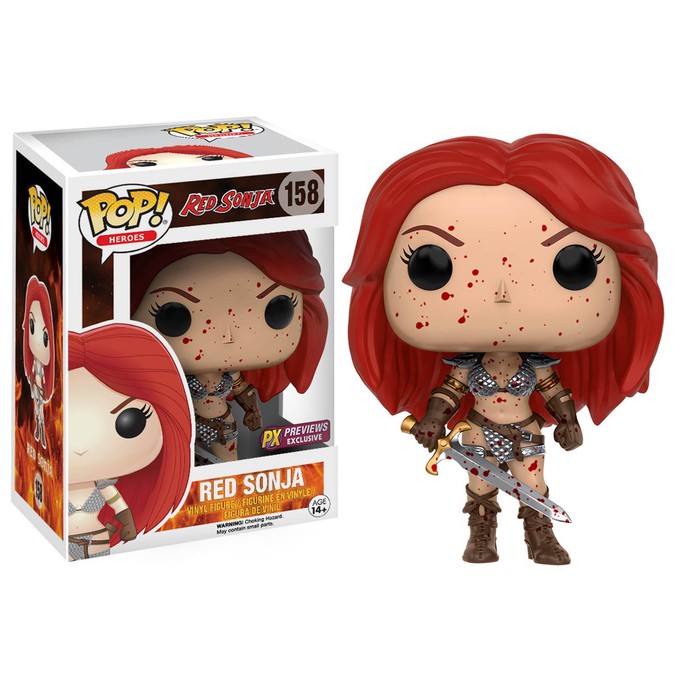 I want blood. I want revenge for all women on screen, Red Sonja is that kinda killer... One we should love and be reminded of O-Ren Ishii from Kill Bill... That's more Red's style. Please gimme that!

Speaking of directors,  who do I most wish to be in charge of this epic challenge is, Michelle MacLaren (director of- episodes of the "X-FILES", "Breaking Bad" 11 episodes, "The Walking Dead" 3 episodes, "Game of Thrones" 4 episodes, "Better Call Saul" and "Westworld" plus many more...)  I believe with all my heart she would rock the fuck out of a "RED SONJA" project and I highly suggest looking at a STRONG female director (LIKE HER)... Learn from the successful projects Corporations PLEASE geeks need you to LEARN to listen to the creators! Realise, what has been done right and wrong via these types of projects.... Michelle MacLaren is a director with some major successful chops, and I would jump for fuckin' joy and buy ye all a jug of mead or grog if ye like, as I do the  "Dance of the Seven Veils"!   As this lady (Michelle MacLaren) not only has learned the art of filmmaking and guiding, in my opinion, she would own this project! Michelle MacLaren was made to direct "Red Sonja". If not her who? Please, not some dude. As shown by Wonder Woman's success you do not need a penis-having director or known actress to hit the box office, and sometimes a woman's perspective on a female character is best, please see the above (please have WENDY PINI involved section). 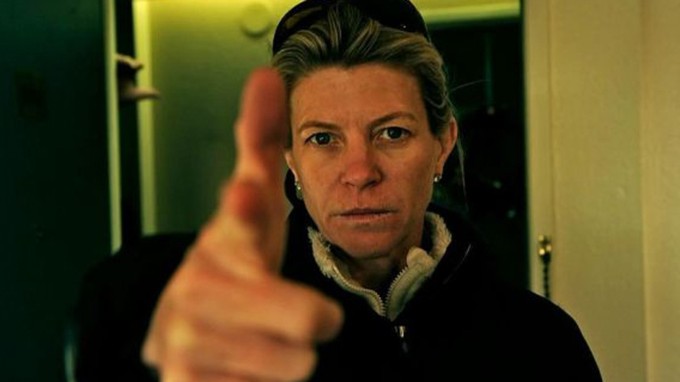 All of my life my Mother, Father and Brother all agreed... "We will push STRONG, Fearless, Badass Ass Kicking (Red-Headed Heroines were highlighted for confidence building) ALL femme Heros her way!" Thus my collection of female heroine figures, comics, and other memorabilia is verging on an extreme problem after 36 birthdays and Christmas', that's what my man Duncan Idaho says... But I know better than to listen to "The Man" just kidding, hehehehehehehee! I love my Dune-Fanatic mucho! It is very hard to have a collection so huge and justify one's obsessions. Got a bit off subject and now getting back to the point :)

Of course, Red Sonja was sorta a "DUH, huh yeah move" if you all want little red-headed girls or any type of little girls to grow up taking no shit, give her someone to grow up longing to be like. Fierce, unrelenting, knowledgeable, and heroic that's the heroine. Also, I know many heroines use their female guile to infiltrate and distract, like the many female ninjas which were considered some of the highest of assassins for they not only had a knowledge of weaponry and martial arts skills but also a knowledge of physical manipulation and the idea that women are not a threat they used craftily. So did our Red Sonja.

I was taught to fight, defend and have self-worth in a lot of ways inspired always by my idol Red Sonja, if they fuck her up cinematically again I will be the first to do a Hyrkanian death dance on their asses!

There were some "Howard the Duck" crossovers so hmmmm..... "Guardians of the Galaxy" keeps teasing me... Red Sonja probably should too or just fuckin' gimme Howard's  Adventures with Red Sonja and that series you teasing fucks!!

Red Sonja was my first hero, that I actually worshipped her with all of my beings abilities, before the movie, my Mom read me "The Shadow of the Vulture" and all writings she could find. My Father added to my collection throughout the 80's and 90's, knowing he was reinforcing the little bond I had with my Mother, when she passed in 1992, my Father doubled his efforts to instill that connection of strength, self-worth, and confidence.

Red Sonja is my #1 Hero no matter what, she was never as popular as "Wonder Woman" this probably just added to the appeal of the redheaded blood-soaked vengeance seeker to me! Mu-Hahahahaaaa!

I loved her because she was human and hurt in human ways, then a Goddess came and gave her aide as well beyond ball breaking powers, training in war cries and forgotten martial arts, yet still, Sonja was human. Her trials and tribulations were that of well, a Goddess in the making,  she was tortured, forgotten, abandoned to death many times, yet arose like a phoenix with sword in hand. No pressure Millennium Media.... but I am watching and you better not fuck up my #1 Heroine! 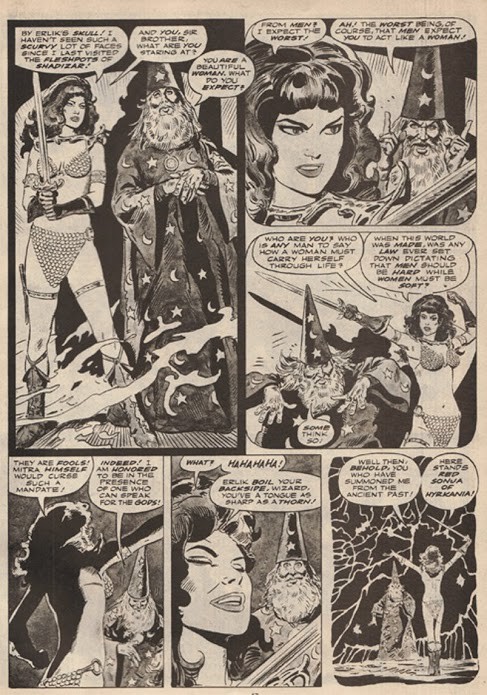