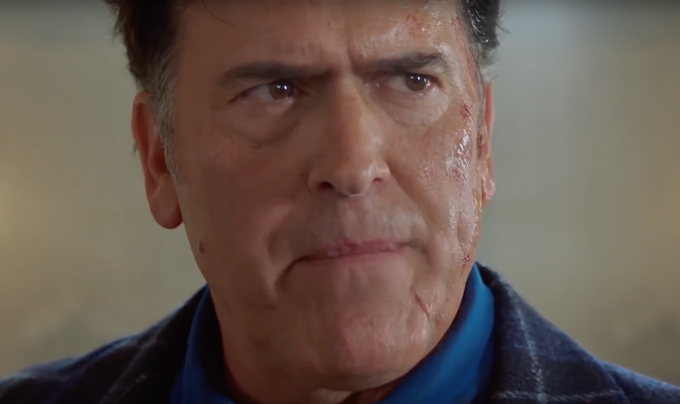 The Chin is back in for another round of Ash Vs Evil dead. Starz delivers a knockout trailer for round 3 of the comedic-horror series. Season 3 will be 10 episodes total. If you have not watched the first two seasons then go away and do that first, your doing this wrong. Spoilers ahead, you have been warned.


We have seen the blood-soaked local S-Mart Jefe chainsaw his way from small-town demonic Boo Radley status to the schmoozing hero of humanity. Ash finds out he has a long-lost daughter entrusted in his care. Now this deadbeat dad must spend quality family time hacking and slashing the army of Deadite hoards. Ruby Knowby(Lucy Lawless) and her Deadite plague seem responsible for a televised massacre Kelly Maxwell(Dana DeLorenzo) witnessed. Kelly then returns with a to warn Ash and Pablo Bolivar(Ray Santiago) that the Deadite plague of darkness has sinister plans in store for all of them. Season 3 premieres on Feb. 25 on Starz!

Thanks for joining me, Enjoy the new trailer! Mad Dashiell over and out.

Mad Dashiell's Space for Rant: I used to be one of those EVIL DEAD fans that would dream of a perfect EVIL DEAD 4 film coming to theatres. I think around the time Sam Raimi came out with SPIDERMAN 3 I began to lose hope. I'm pretty sure I wasn't the only one either. But what could be cooler than 30 hours of EVIL DEAD vs just another film installment!? Keep it coming, keep it funny, keep it fresh, and take us as far down that Deadite rabbit hole of apocalyptic proportions I say! Long live the king baby!