OA My God, Look At Their Pop! Plus Character videos for JUSTICE LEAGUE!

Mad Dashiell here, we got a nice lineup today everybody. So let's talk JUSTICE LEAGUE! In order to help prepare audiences for the new DC hero line up around the corner, we have 3 short JUSTICE LEAGUE introductions that we will begin to dissect.

The first is CYBORG, right away we see Victor holding a mysterious box. This devises origin, known as a Mother Box is traced back to Jack Kirby's NEW GODS and FOREVER PEOPLE. Let's go on a tangent and talk about that box! Classically these boxes were created by Apokoliptian scientist Himon with the mysterious Element X. Let's hope they go anywhere near that storyline but overall the boxes true nature is unknown. Mother Boxes generally are believed to be sentient, microsized, portable supercomputers with massive power hardly understood by the users that wielded them in DCs FORTH WORLD setting. In the comics, the boxes powers range from teleportation, energy manipulation, and healing. This is one of three boxes, one was entrusted to the Amazons, and the final one to the Atlanteans. Will Darkseid use these to take over the Earth? In the comics, Darkseid himself used it for healing after he was beaten by Doomsday. We know that Victor's father worked at S.T.A.R. Labs and he was last seen using the Mother Box in a final attempt to save his son. The athlete has lost most his limbs but is now merged with advanced technology from another world, or dimension, making him a cybernetic being. A completely unique techno-path that can merge with any technology. Wow both Apple & Android? Now its time for Victor Stone to discover the hero he is. What better way than for Cyborg to save officer vintage Jimmy Olson before he gets pummeled by a flaming military Humvee. There's a nice subtle Superman easter egg right there. Next, we see him hooded meeting in secret with Diana Prince. She seems to be the connection that brings Cyborg closer to finding his missing father. Next, we see him merging with Waynes Batcomputer and in each shot looking more like a full-fledged member of the JUSTICE LEAGUE.

The Flash's story is an odd one. A normal man by the name of Barry Allen gets hit by lightning and doused in chemicals. Everything an old-school hero needs to start mutating into a superhero. Aside from super speed, there are so many other powers the Flash develops in the comics, moving through walls, and time travel for example. It looks as though from this snippet of video we see here that Bruce Wayne is trying to understand Barry's extradimensional abilities. The blue crackling lightning arching all around the Flash is interesting. I would say its maybe just an anomaly linked with Flashes super speed but I see it on Aquaman in the trailers as he's flying through the air. So I'm thinking its some kinda Wayne Tech merged with the technology the Mother Boxes, to make some kind of Wayne-Teslaiean technological hybrid.  Barry is also the youngest one of the heroes as well as the least experienced in fighting. He kind of has a comic relief wiseguy thing going on reminiscent of Marvels Spiderman. Sorry to leap universes there... let's stay on track, on to the next video.

Half Man, Half Atlantean, all badass! The new Aquaman doesn't just talk to fish, he drinks like one when he isn't smashing through buildings surfing on his fallen enemies. At this point in time, he is only the prince of Atlantis. One thing I think is interesting is from whatever glimpses I see of Atlantis it doesn't seem to be a vast sparkling beautiful city teeming with life. It kind of looks like its slightly in ruins. I speculate there will be a power struggle and the unjust ruler of Atlantis will let the Mother Box they are guarding fall into the wrong hands. That could be enough of a reason to have the excitable waterlogged prince leave his kingdom. Possibly to return the alleged one of three ancient devices to its rightful place. From surfing Batmobiles to dodging flaming axes underwater, Will it will make a lick of sense? One thing is for sure, Aquaman doesn't intend to save the world with just the help of his fishy friends.


Thanks for joining me Mad Dashiell, over and out.

Mad Dashiell's Space for Rant: So this is a long shot, but let's talk about other possible places to give us clues towards the Green Lantern or Lanterns making an appearance in the JUSTICE LEAGUE film. ENTERTAINMENT EARTH currently has a collection of glow in the dark POP Justice League toys you can order in time before Christmas. Some could say these are tied into the movie exclusive to EE. Among the figures stands a Justice League Green Lantern Silhouette Glow in the Dark Pop Vinyl Figure... OA my God!  Which GL do you hope this represents? 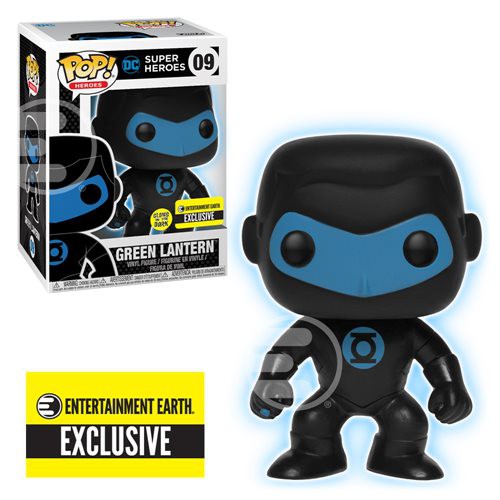