A few weeks ago, I was lucky enough to spend a weekend attending FilmQuest on behalf of Ain’t It Cool News. FilmQuest is a wonderful genre festival in Utah that has recently relocated from Salt Lake City to the enchanting small town of Provo. Nestled against the majestic backdrop of the Rocky Mountains, filmmakers conferred in the Covey Center for the Arts to watch films and discuss their craft for a week. 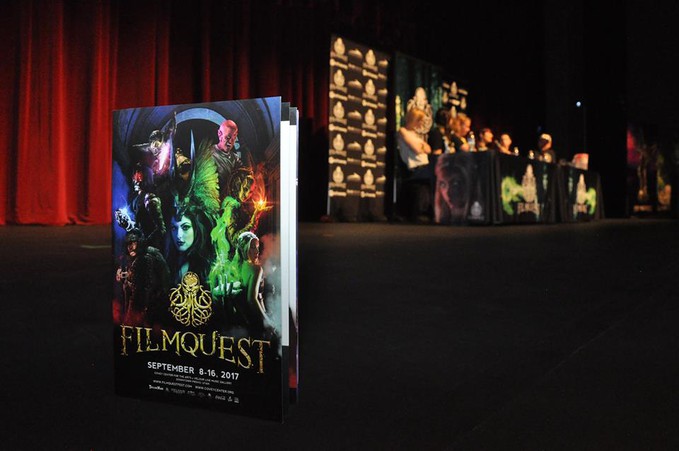 And while this festival is still in its growing stages, the programmers know how to pick great independent feature films and offer wonderful networking with other filmmakers. This festival focuses on promoting the success of their films as best as they can. Films here are truly chosen for their merit and for the talent involved. I was given a generous behind-the-scenes view of the inner workings of FilmQuest by founder and director, Jonathon Thomas Martin. His gregarious nature and passion for the success of his festival is contagious and his total respect for the filmmakers he promotes is admirable. Jonna Jackson, his assistant director is also a major force in the festival. Together their priorities focus on integrity and curating truly commendable movies. Diligent work is put into balancing the programming with a little of everything and from the sampling of films I screened, all were deserving of an audience. 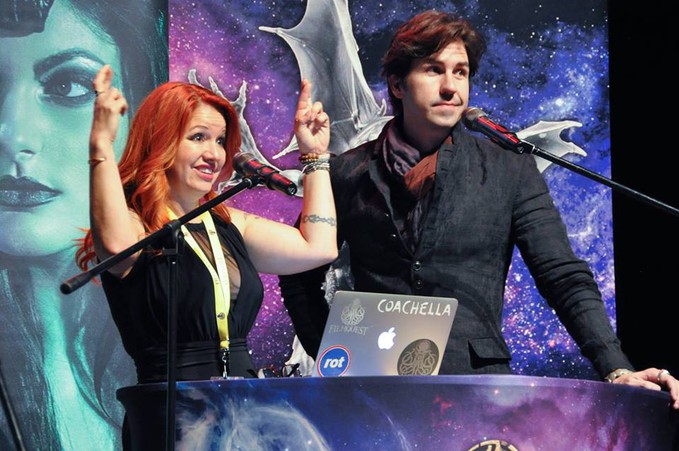 "Jonathan Martin and Jonna Jackson at the awards ceremony."

My flight arrived late on Thursday, five minutes to midnight. Due to my work commitments, I was only able to attend the final weekend. I grabbed a Lyft and headed to the after party of the 30th anniversary screening of Princess Bride. I arrived to a rollicking group of Pirate Wesleys, Inigo Montoyas and Princess Buttercups partying the night away. There were inflatable swords, a photo booth, and of course, beer. Folks were in a jolly mood, riding a nice buzz and dabbling in karaoke. It was a fantastic first impression. As I was catching the tail-end of the party, we soon headed to Martin’s family estate of which I was offered my own room and balcony. I checked in with Harry via Facebook Messenger and he jested that I’d probably have a balcony Dracula visit. He knows my obsession with Coppola’s Dracula so I kept the door unlocked, you know, just in case.

In the morning, we headed to the Covey Center for the Arts for the day’s screenings. The first block was fascinating! It was a live film analysis of Blade Runner by Professor Alex Nibley and Crit Killen. Professor Nibley offered a mesmerizing play of play of how specific choices in lighting, tone, make-up, blocking, performance, scene selection, camera angles, and set design contribute to telling the story. With poetic and practiced eloquence, he guided us through the nooks and crannies of the film, proving yet again that Ridley Scott is an absolute genius at his craft. Crit Killen opened the session before the analysis to show us how he built most of the set using a technique called “kit bashing.” He brought amazing slides of his work on the set of the film, specifically showing us how he built the Tyrell building as well as sharing with us that Blade Runner was the last big cinema film not to use some form of CGI. I was lucky to have lunch with both gentlemen after their presentation and snagged an interview with Crit that I’ll publish here soon.

Next was a panel on minorities in filmmaking that I was unable to attend due to this being my only opportunity to grab a lunch but I was back for the next block with was a collection of shorts labeled “Grab Bag.” FilmQuest screens a LOT of shorts and I honestly feel that a few shorts could have been cut from each block. They should have been cherry picked just a bit more as one or two of them were a bit off. Even with this observation, many of the shorts were outstanding and more than worthy of gracing the silver screen. A few of my favorites from this block were Jouska, Quitting Time, Pendulum and Street Wizard’s Apprentice.

Next up was a panel of festival directors, sharing the ins and outs of running and planning film festivals. The Q & A offered filmmakers tips for success on getting their projects selected for festivals. It was interesting and a valuable resource for those interested in being more involved in festival work and filmmakers vying to get their films selected.

By now I was ready to sink my teeth into a feature film and I was pleased with Charismata, a serial killer sleuth film from England. I quite enjoyed it and will be posting a full review shortly. Preceding Charismata was a fabulous short titled Alfred J. Hemlock. The actor playing the titular character later won an award for his performance and most deservedly so. Closely following this screening, was the feature The Glass Coffin, a disturbing Spanish film about a famous actress held hostage in a limousine. Technically, this film is incredible. The performance by actress Paola Bontempi is top notch and she won the Best Actress award. Unfortunately, I had a hard time with the content and truly didn’t enjoy the screening. Specifically, the film contains extreme violence and rape. It’s unflinching and frankly, an exhausting experience. I question the motives behind the film or the necessity to tell this kind of story in this way, however I give merit to the overall quality and talent involved.

We finished Friday with a “Midnight Madness” block of more shorts and my favorites among them were Homesick, Fuck Everything, and Nocturnally Yours. Fuck Everything was a hilarious music video by Kai Smythe and it’s available to screen on YouTube. Check it out and enjoy a giggle. He won for best video at the awards ceremony. Cheers, Kai!

Saturday began with yet another set of shorts, and these had more than a few amazing selections. The Faceless Man was a surprisingly heart-warming tale about our inner potential to help others. The Incredible Tale of the Incredible Spider-Woman was a nice gothic fable. Wandering Soul offered a terrifying Vietnam War ghost story. My favorite was a heart-stopping short titled iMedium. It kind of blew my mind and I really want to see what director Alfonso Garcia can do with a feature length format.

After this intense line up of shorts, I needed some air and took the opportunity to go for a walk through lovely Provo with actor Jamie Satterthwaite from Charismata. We enjoyed a delicious Argentinian lunch then when for a stroll. The town has only two bars so we had a limited selection to grab drinks but we made due at a divey spot called City Limits. It was nice to walk about after spending so much time in theater seats and the clean crisp air was wonderful. This caused me to miss the next block of shorts which was a shame as many of them won awards or were nominated for their merit. The Ningyo, Spiritus Lepus, and Mauvaises Têtes were among them. I’m making it a point to seek them out for future viewing.

I returned in time to screen Diani and Devine Meet the Apocalypse. This slightly meta comedy is about a boyfriend/girlfriend team of comedians who go on a hilarious odyssey after an unknown event takes out the power grid in the United States. The writing is brilliant and the movie is a laugh-a-minute adventure. The titular couple is a real-life couple and were in attendance. The short that played before it, Hope, was fantastic and gives the audience an interesting spin on the zombie genre. After the film, I met up with Crit Killen for our interview and a delightful conversation on filmmaking. I’ll be transcribing this in the days to come.

The closing night film was Gnaw, a wonderful creature feature starring Penelope Mitchell and Kyle Gass. I had a really great time with this movie and plan to offer a full review soon. After this film, we were asked to go upstairs and take an opportunity to capture a few pics on the red carpet while the theater was set up for the awards ceremony. This proved an excellent time to mix and mingle, and I got to know the rest of the filmmakers of Charismata. Folks were starting to come in dolled up for the ceremony in suits and glamorous dresses. 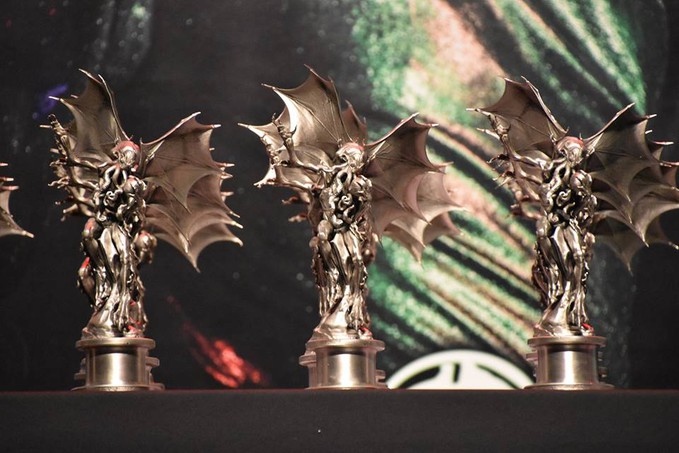 The awards began shortly, and FilmQuest has the BEST award statue. It’s a very elaborate and monstrous sculpture of Cthulhu. Assistant director Jonna Jackson has nick-named it “Stabby” since the wings are tipped with sharp points that often draw blood if one isn’t careful. Kai Smythe, showed off one of these wounds later in the night. It’s truly a coveted prize. FilmQuest invests a generous amount of time calling out all nominees. While this is noble, it did cause the ceremony to drag on a bit too long. As much as all worthy films and filmmakers deserve recognition, perhaps listing nominees on the website for bragging rights later would be more appropriate. It was funny however, to watch how all the winners navigated the huge step up to get on stage. A few brave souls lept the three-foot ledge, while Kyle Gass, chose to log roll himself up after winning Best Supporting Actor for his role in Gnaw. The Glass Coffin won Best Feature Film, Diego Hallivis won Best Director for Curvature, and Best Documentary went to Cassette: A Documentary Mixtape. Check out their website to see all the other winners and BRAVO!

The closing night party took place in an Italian restaurant just down the street called Oregano’s. The food was tasty and we were treated to a fresh buffet of gnocchi, meatballs, salad, and cannelloni. It wasn’t an open bar and local laws limit the sale of hard liquor in venues, so folks mostly enjoyed wine on their own dime. As much as I enjoy a free drink or two, it was refreshing to party without folks getting absolutely trashed within the time span of an hour. The people drank indeed, but the buzz had a slower roll out and everybody seemed to be on the same pace. It meant that conversations were light and intriguing, folks weren’t stumbling about like fools, and the ambiance was jovial and relaxed. The photo booth was a big success and I was pulled three separate times to partake in the antics. A little after 1:00AM, I hailed a Lyft to whisk me away to my room. My flight left in the morning for Austin, and though I was loathed to leave the boisterous party, it was time.

My overall impression of FilmQuest was that despite still being a bit rough around the edges on time management, it is a filmmaker’s festival and a good one at that! All in attendance were there to network, share information, and celebrate each other’s hard work. This is not to say that the public would not enjoy the festival. This is a perfect festival for people who love film and want to learn more about the passionate folk who put their blood, sweat and tears into the genre craft. The films are wonderful and the people are even better. A huge thank you to Jonathan T. Martin and to Jonna Jackson for gifting me this wonderful experience! I will be recommending this fest to many people!

FilmQuest 2018 is scheduled for September 7-15th and is currently accepting submissions.

Thank you for reading!