Freddy reviews the comprehensive history of James Bond, NOBODY DOES IT BETTER, with a surprise from Michael Madsen

Ken, with a review of NOBODY DOES IT BETTER: THE COMPLETE, UNCENSORED, UNAUTHORIZED ORAL HISTORY OF JAMES BOND. 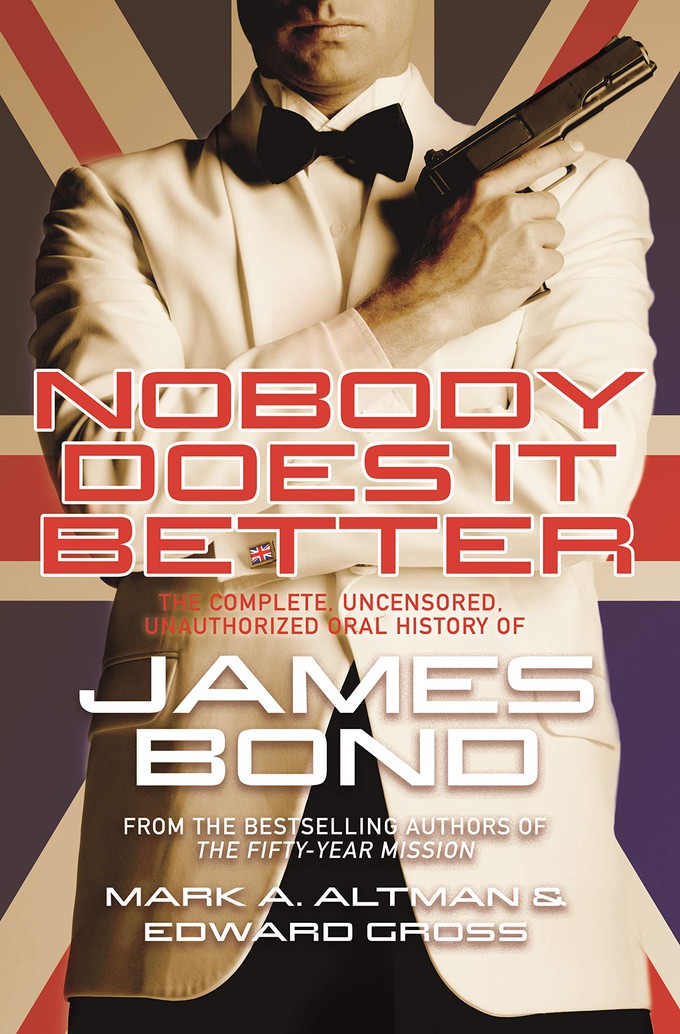 With all of this free time sitting around the house, I’m getting a ton of reading in.  I just finished this 718 page tome and am really looking forward to the next two books on my list.  Nary a 400th page, is seen!  Yay!

THE UNWILLING by John Hart.  Details can be found here.

Then, it’s MAYHEM by Estelle Laure.  Details can be found here.

I also have an interview with Issa Lopez (writer and director of TIGERS ARE NOT AFRAID, one of my favorite new horror films) for the blu-ray release next week'ish.

The following week, I have an interview with Greg Nicotero (THE WALKING DEAD, director/writer/etc) for the Shudder release of CREEPSHOW: Season 1, in the middle of May.

Are you not entertained?

I should preface this review with, I’m not really a James Bond fan.  I think I’ve seen every one because my dad was very much a fan.  It just never grabbed me.  Sure there’s stuff I like.  He kills people and gets the girls, but it's not enough.

I really like a few full films, like GOLDFINGER, FOR YOUR EYES ONLY, and now CASINO ROYALE but largely, the idea of a super suave British spy that always gets the bad guy and beds the girl is largely boring to me.

I don’t judge though.  One man’s smut is another’s junk, or something like that.  I love horror, the gorier the better and that’s pointless.  Enjoy your Kardashians, Tiger King, Pink Flamingo’s, Hostel and James bond, shamelessly!

“I did the best I could, but, oh dear lord, he had a perfectly good chance, and he wasn’t bad in the film, was he?  It was perfectly good, it was just that he was impossible to deal with.  That is a classic example of somebody who doesn’t know how to deal with fame and got it wrong.

So what is, NOBODY DOES IT BETTER: THE COMPLETE, UNCENSORED, UNAUTHORIZED ORAL HISTORY OF JAMES BOND?  It’s essentially an enormous novel that encapsulates everything Bond.

How the idea came about and Ian Fleming laid pen to paper to create Bond, James Bond. Ian eventually selling the rights to his novels and the many movies to follow, 24 at last count.  The man who created the first image of Bond, Sean Connery.  His tiring of the role, though it made him quite a bit of dough.  George Lazenby’s ill-fated attempt to fill the gap.  Roger Moore reinvigorating the series with a dash of humor.  Timothy Dalton becoming a Bond much more in the image of Fleming’s novels to an audience that wasn't interested.  Pierce Brosnan bridging that gap, giving Bond new life and creating maybe the best video game ever, GOLDENEYE!  Daniel Craig coming in and showing them all what Bond could have been all along, with the help of a top director, Sam Mendes.  It’s an epic climb with many trips and stumbles but ultimately no falls.

Who else can say that five decades later?

What makes the book a gripping read is that it’s told in quotes from those that were involved.  All of them.  From production assistants, to each director, Bond girl, studio head and ultimately, the Bonds themselves.  There’s a story told through all of their eyes that fills in everything you could possible want to know about Bond.

“Now in the twenty-first century with the extraordinary revival of Bond in the hands of Cubby’s daughter, Barbara, and his stepson, Michael Wilson, Harry is no more than an asterisk.  But he was much more than that.  There are people along the way that helped make James Bond into the most successful franchise in movie history, but if it hadn’t been for Harry Saltzman, it wouldn’t have happened at all.

Mark A Altman & Edward Gross create a comprehensive history that’s interesting in those opinions and their disparities.  It reads very close to a Bond film itself.  Starting off dreamy and creating the image of Bond.  Then breaking into quote after quote on the movies, in order, along with the guy playing Bond at that time.   Ending with everyone comfy and paid, walking off into the sunset.

I would love to see one of these for Star Wars, or in the future with the Marvel movies.  It’s such a unique and engrossing way to telling the story.  It’s not just one person’s story, it’s everyone that was ever involved in bringing these films to the big screen.  Yes, even those didn’t benefit financially.

This master class in story telling keeps your interest through the decades.  That’s the only time the authors really jump in, giving the reader a brief encapsulation of the decade to come.  An initial history, the players involved, ending with their thoughts on what it all means.  All followed by the decade itself told in first person account from those that made it all happen.

If you even like James Bond, the films or books you will absolutely find this novel a breeze.  I’m not that big of a fan and I found it to be a masterful retelling of 007 that kept me enrapt throughout.

If Pierce Brosnan was the heir to the Roger Moore era (and that’s a compliment, by the way), Craig proved a perfect fit to the tailored Tom Ford tuxedo as Sean Connery’s successor as the gritty, fierce, and unforgiving secret agent with a license to kill.  And not reluctant to use it.

You can find NOBODY DOES IT BETTER: THE COMPLETE UNCENSORED, UNAUTHORIZED ORAL HISTORY OF JAMES BOND here.

I promised you all some Michael Madsen, didn’t I?  I know i know, am i going to bark all day little doggy, or am i gonna bite?

Stay safe out there!
Ken Lewis (AKA: Freddy Beans)
www.freddybeans.com