As many of you will be aware by now trailblazing actress and singer Nichelle Nichols has passed away at the age of 89. She was known by many as Lt. Nyota Uhura in STAR TREK: THE ORIGINAL SERIES. Her son Kyle Johnson released a statement on her official site which to my mind describes how I’m sure we all feel right now.

“Last night, my Mother, Nichelle Nichols, succumbed to natural causes and passed away. Her light, however, like the ancient galaxies now being seen for the first time, will remain for us and future generations to enjoy, learn from, and draw inspiration from. Her’s was a life well lived and as such a model for us all.”

For many Nichols was more than the communications officer on the starship Enterprise she was an inspiration. For me, she was one of the first strong female characters I had had any exposure to and she set the standard for what my idea of what a heroine could be. She was smart, Intelligent and man could she sing. I remember watching the episode of the original series called “Charlie X” and having fond memories of that voice and how absolutely gorgeous it was set to that harpsichord. I've added the video below so you guys can enjoy it too. A little-known fact about that episode is that the lyrics and music for the song that she sings were written by Gene Roddenberry himself. Nichelle was also very outspoken on the set of Star Trek being famously annoyed that her character didn’t understand Klingon when the universal translators packed in during the events of Star Trek VI: The Undiscovered Country citing that as a high-ranking communications officer, shouldn’t Uhura be well versed in the Klingon language? She had a fair point. She loved Uhura and because she loved her character we loved Uhura as well.

Although she was most famous for Star Trek, Nichols also had a great career away from the bridge of the Enterprise featuring in films such as Truck Turner (1974) opposite the legendary Isaac Hayes. She featured in the comedy film Snow Dogs (2002) and in 2006 appeared as a Madame of a brothel with some serious tax problems in Lady Magdalene’s. She had recurring roles in the likes of Heroes and The Young and The Restless, the latter getting her first Daytime Emmy nomination in the “Outstanding Guest Performer in a Drama Series” Category.  She also had many voice acting roles including Futurama, Gargoyles, Batman: The Animated Series and The Simpsons, not to mention two musical albums “Down to Earth” in 1967 and Out of this World in 1991. To say that Nichelle had done it all was an understatement.

Nichols was surely loved by all that met her and at one point, was an honorary member of the Alpha Kappa Alpha sorority! She received an honorary degree from The Los Angeles County Mission and was given a star on The Hollywood Walk of Fame. She was the first woman to receive The Life Career Award from the Academy of Science Fiction, Fantasy and Horror Films, and has an asteroid (68410 Nichols) named in her honour.

Nichelle Nichols to me was one of the greats and will be deeply missed, but she will never be forgotten. She lived long and we all prospered… 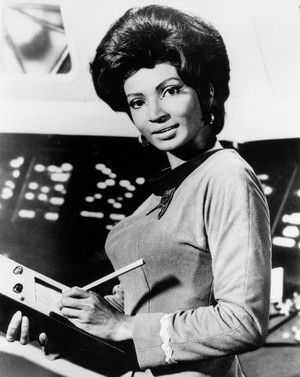