For the second installment in my year of Nic Flicks I wanted to do something like my heroes in Monty Python and offer you “Something Completely Different.” To that end I leapt forward ten years in Cage’s career, seventeen films and an Oscar award later, to bring you his fully-eclosed action-star reinvention in Jerry Bruckheimer’s production of Simon West’s CON-AIR. What I discovered upon re-viewing this now 20+ year old film is that the similarities with RAISING ARIZONA outweigh its differences. It is another live-action cartoon, featuring indelibly quotable lines, an earnest caricature of a hero from Cage, and a legacy that defines the genre. 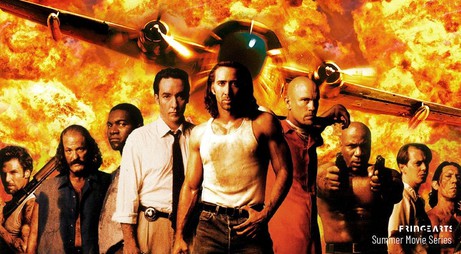 Marking Bruckheimer’s first production without longtime collaborator Don Simpson (who panned the idea of CON-AIR from the get-go), CON-AIR brings first-time feature-film director Simon West (THE EXPENDABLES 2) on board to helm a cast of cinema giants in a Scott Rosenberg script based on an article he’d read in the paper. If that sounds flimsy and far-fetched, wait until you hear the actual film’s synopsis:

Sounds busy, doesn’t it? It is, and purposely so. It’s bursting at the seams with name-dropping and plot-driving contrivances. It doesn’t even care that it misidentifies Mykelti Williamson as one of the defecting convicts rather than Cage’s Poe’s one true friend, and the McGuffin keeping our star, and us, involved in the proceedings. Let’s check out the trailer, circa 1997:

What I found particularly interesting about that trailer is that 90s-trailer-voice-guy made it a point to tell us that the film is directed by Simon West. Interesting because prior to directing this film West’s most-recognized work was Rick Astley’s “Never Gonna Give You Up” video. Yes, this film Rick-rolled us long before we even realized that was a thing.

Also, with the benefit of hindsight, we see that this film gifted us with one the best GIFs to grace our screens in the past ten years. If you don’t know, now you know: Blow Gently on The Screen for Five Seconds GIF.

Even without the user interaction this sequence from the film has made its way into the annals of GIFdom as shorthand to express the sweet breeze of freedom on the face of the caged, or Caged, I could say. (Sorry, that was too easy.)

When discussing this film, particularly in relation to its inclusion of an exploration of the career of Cage, it benefits us to bring up several points about his contributions to its overall structure. It was Cage who suggested the character of Cameron Poe be from America’s South, that he be a military-trained hero prior to the character’s Call to Adventure, and the inclusion of the Bunny Rabbit. The first point informs the other two, and it is from this character choice that the film lines up firmly with RAISING ARIZONA as being another cartoon of the real world. 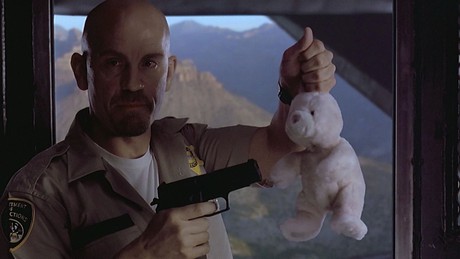 Poe speaks in long drawls, with a big booming voice, so that everything he says has dramatic weight just because it takes so fucking long to sit through. Pair this with Baby-O’s wild oscillations between fragility and immortality, a brutal sight-gag with a severed arm, a firetruck that slams into an armored car that causes an explosion to rain money down on a Las Vegas street, or the idea that a dozen men with ropes can pull a Boeing 727 any measure of distance across a salt flat, and you’ve got a hyper-realized fantasy realm satirizing reality. Cars and human bodies fall from the sky and inconvenience passersby, causing mild agitation. Not to mention the number of prisoners on the plane. At first there are a handful, then they “drop six and pick up ten” in Carson City, but when a shootout takes place at Lerner Airport, there are so many convicts of indeterminate origin and featureless recognition that the filmmakers could’ve literally drawn in a few extra on the film cells, à la MC Skat Kat in a Paula Abdul video, and I would’ve been like “Sure, that checks out. Let’s roast these pigs in this Kill Box, what’d ya say?”

What this movie gets right, though, it gets especially right, and in American cinema in 1997, that meant dramatic tension, unquestionable heroes, insanely quotable lines of dialogue, and EXPLOSIONS! Poe is a revelation as a hero: a man unwavering in his moral compulsion to do what is right and to protect those weaker than him. At this point in Cage’s physical transformation, that subset of “weaker” is a vast swath of the average public, even that on the screen. He’s a prime physical specimen, clad in a rapidly dirtying tank top as he runs from explosions and punches evildoers with that Academy-Award-nominated sound design that sounds like King Kong punting an elephant.

As far as insanely quotable dialogue, I am certain that you can fill our comments section with your favorites, so I’ll limit my coverage to one. As Baby-O lies on the floor, probably dying (but one can never be sure with his tentative relationship with mortality), he tells Poe that maybe there is no God, which causes Poe to move his hand from O’s mortal wound and replace it with Guard Bishop’s, then abruptly stand and prepare to leave. When Baby-O asks what he’s doing, Poe responds “I’m gonna show you God does exist.” I turned to my wife just then and added “And his name is Nicolas Cage.” Poe then goes to storm toward the cockpit, walking through bullets with the Power of Friendship (like he’d leveled up in a SCOTT PILGRIM vs. THE WORLD manner) and knocking out Cage fighters like they’re tackling dummies on his personal concourse. No one talks like that and I fucking love it!

It’s ridiculous and over-the-top and it’s fantastic. It’s all the machismo of the 80s with the world-ending explosions of the 90s; everything Bruckheimer convincingly told American cinemagoers they wanted for two decades.

Now let’s talk about the stacked cast filling out the gills of this tome of the zeitgeist of the 90s! John Malkovich, Ving Rhames, Danny Trejo, John Cusack, Colm Meaney (whom I always identified as Chief O’Brien from Star Trek: TNG, so seeing him curse and be a general douche was an odd thing to reconcile), Dave Chappelle, Monica Potter, and of course, Steve Buscemi. I read that the role of Garland Greene, aka the Marietta Mangler, was written specifically for Buscemi, and anyone who has viewed the film would agree that his casting here is perfect. I learned that Rosenberg, prior to CON-AIR, wrote the underrated crime-noir flick THINGS TO DO IN DENVER WHEN YOU’RE DEAD, which also features Buscemi in an understated and terrifying role, so I could easily see the connection. If you haven’t seen it, I recommend it highly. 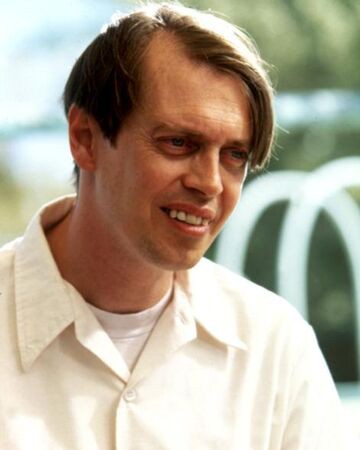 At this point in his career, I had been following Cage curiously. I saw him do some weird shit with Las Vegas backdrops, watched him as the beleaguered bodyguard to a former First Lady, a romantic lead with a winning lottery ticket, and celebrated his Oscar win as a suicidal drunkard. What’s particularly fascinating about Cage’s first full-blown action role is that he doesn’t pivot full-tilt into the action genre following this feature. It’s preceded by THE ROCK (which we’ll be covering in June) and followed by FACE/OFF (which we’ll be covering in November), but he then dives almost immediately back into romantic fare and heavy drama. All told, Cage filmed action pictures for about a year then grew bored of them, it seems. I can’t definitively say this is a shame, though I will go to bat for his leading-man chops in all three films mentioned, but I see his point. Cage is an actor of range, of risks, and one to elude classification.

In short, Cage cannot be caged.

Until next time, y’all stay safe and stay sane!