This past Wednesday marked a historic moment in America’s history as we swore in the nation’s 46th President, continuing the succession of Democracy, that most sacred of American Ideals. To commemorate the moment, I chose a Nicolas Cage film that alludes to the very beginning of this great nation, however loose that connection might be. That is why this past week I re-viewed the 2004 Jerry Bruckheimer-produced Jon Turtletaub action romp NATIONAL TREASURE.

I fully expected to laugh at this feature throughout, even going so far as securing the rules to a drinking game associated with the film to make it bearable, but two things happened to render the massive amounts of alcohol unneeded. First, apparently there is also a drinking game for the 2009 horror-comedy ZOMBIELAND and after trying to keep up with that insanity on a Saturday night, I had become an actual zombie. Afterwards my palate for booze had been sullied for several days. Secondly, and more relevant, NATIONAL TREASURE is fun as hell. 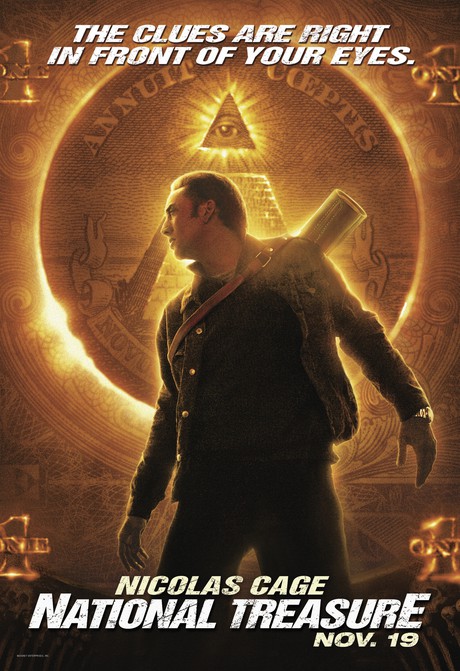 NATIONAL TREASURE hit theaters in 2004, but the idea for the film had been in development since 1999, pre-dating Dan Brown’s elementary mystery The DaVinci Code and its subsequent film. I mention that because while viewing the film I noted that Cage is not nearly as Cage-y as he has been in a large portion of his filmography, and I wondered which other actors could step into the shoes of 9th generation stable-boy turned honorary Knight of the Templar Benjamin Franklin Gates. It could’ve easily been Tom Cruise or Matthew McConaughey, or even Tom Hanks, but research shows that Nicolas Cage was the only star ever attached to the role. Indeed, through its five-year incubation period, Jon Turtletaub mentioned Cage’s attachment as “A major get; worth the wait.”

And he’s not wrong. Cage’s trademark acting style brings a winking awareness to the premise, allowing him to be fully immersed in the role while putting forth little effort, which gives the entire film a loose presence, a tentative hold on reality. It is a fantasy with the occasional historical fact thrown in to jarr the viewer to attention, triggering a subconscious impetus to “learn more, maybe visit a museum” that imprints almost as a subliminal message. Most of the film features Cage channeling an earnestness that shines through as almost childlike, reinforced by the film’s prologue which introduces us to Gates as a boy, learning the story of his family’s legacy from his grandfather, played by storytelling cinematic master Christopher Plummer. Seriously, does anyone know if there’s a site of Christopher Plummer just reading pedestrian recipes or something? Because I would enjoy the shit out of that.

Cage does get to go a little Cage during a Gala scene wherein he offers a glass of champagne to National Archives head archivist Abigail Chase (Diane Kruger) to pilfer her fingerprints. He proposes a toast “to high treason” then makes glib light of capital punishment before downing his glass in one theatrical sip. It’s brief, but it is again one of those moments that would ring strange or reaching for any other actor, whereas we have been expecting it for quite some time.

Aside from that, Cage is a serviceable hired gun in this film that steams ahead on its own internal mechanism upon which all treasure hunting films subsist. They solve clues, sending them from one historically significant locale to another, avoid capture from the authorities and the rival treasure hunters, run, jump, light torches, quip comedically and whim rhapsodically about treasure, history, and legacy. To take the pressure off of Cage to be both earnest and glib, Justin Bartha is added to the cast as a computer expert and comedic relief. Though his part was originally much smaller, he scored so well with test audiences that many of his lines and mannerisms were added into the final product from the nearly four hours of captured footage.

Once again, this film features a McGuffin that is actually a person. In this case, it is a stooge on the antagonist gang named Shaw, played by David Dayan Fisher. He is given little dialogue in the film, and seems almost inconsequential, but his is the name most frequently uttered aside from Gates, himself. Significantly, he is also the only character in the film to die, which is a big deal considering his boss, and the main antagonist, is none other than Sean Bean, who famously dies in movies far too frequently. Bean’s Ian Howe remarks to Gates and his treasure-hunting posse that none of their lives mean as much to him as Shaw’s, and he’d happily trade any of them. There is a reverence for Shaw that pushes the divide between antagonist and protagonist, who begin the film as partners.

The rivalry throughout the film seems largely friendly, despite Ian’s henchmens’ propensity to shoot at the do-gooders. Ian respects Gates, and Gates respects Ian. Bean’s portrayal of the villain is oddly gentle; he pores over clues with the introspection of a scholar, and seems in frequent awe of the ingenuity of the Forefathers and their resourcefulness. He threatens frequently but rarely does anything truly nefarious, such as tasing a guard at the archives rather than killing him outright. Granted, this could be due largely to the film’s PG-rating but it still makes for an interesting dynamic.

Then of course there is the threat of pursuit from the authorities, spearheaded by Agent Sadusky, played by Harvey Keitel, who is revealed to be a Freemason, himself. It is fun to see the two legendary actors paired together, particularly as Cage will star as a spiritual sibling in five years time in Werner Herzog’s BAD LIEUTENANT: PORT OF CALL NEW ORLEANS. Keitel largely channels his PULP FICTION “Wolf” energy for his portrayal of Sadusky, confidently on the heels of Gates and his companions, aware of the secondary threat and beaming with a curiosity that mirrors that of the audience. 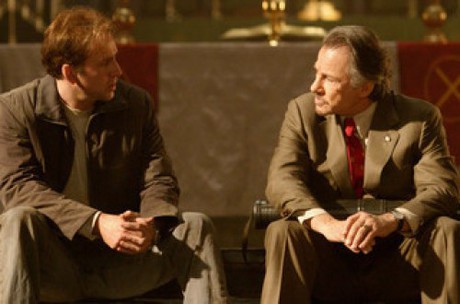 Don’t misunderstand me: I’m not saying NATIONAL TREASURE is good. What I am saying is that a viewer who turns on the film knowing it’s a PG Action/Adventure about finding a treasure that is revealed through clues hidden in American history will get exactly what they imagine. It is fun, pacing its action, cleverness, comedy, and history lessons well enough to earn three times its production budget in its worldwide theatrical release. And for the first time in this particular article series, Cage’s character spends no time in prison, even going so far as to say “I can’t even begin to describe how much I would love not to go to prison.”

Don’t worry, though; he’ll be back in the pen next week.

Until then, stay safe and stay sane!