Howdy, y’all! McEric here with the inaugural entry of what will be a 52-part series that I am calling 2021: A Year of Nic Flicks.

I was very disappointed with my creative output in 2020. I wrote very little, and I don’t think I read a single book all year. I took several college courses and made a few Tik Toks, but I know in retrospect that I was not living up to my potential, most certainly here at Ain’t It Cool. And let’s face it: that ain’t cool.

I decided the answer was to create a column, something that would bring me back to the keyboard regularly and allow me to the opportunity to talk about things that really intrigue. One thing that has always intrigued me has undoubtedly been Nicolas Cage. Nicolas Cage is one of the most divisive actors in America: many either love him or hate him, though most find themselves in the valley between, their current opinion leveraged by any particular performance in question. Cage has been a romantic lead, an action star, a heavy drama performer, a comedic tour de force, and a square peg in a round hole. He can class up a film or push it into absurdity. He can turn a screw in your heart or fart directly in your brain with the same intensity.

His career over the past four decades has been one of immeasurable range, so I had little difficulty writing down 52 Nicolas Cage films that I intend to screen each week in the year 2021. I chose some films to view during certain dates that coincided with either the material in the film or a personal story from my history with Cage. It seems as long as I’ve been paying attention to film, I’ve been paying attention to Nicolas. Some films ended up in this column because I arbitrarily plucked them off a list, much in the same way that I’m sure Cage has selected some of his projects over the past few years.

There’s a bit of timeliness in embarking on this adventure now: Cage just celebrated his 57th birthday yesterday, and the Netflix series “The History of Swear Words” which he hosts just hit the streaming service this past Tuesday. (Yes, I’ve already binged it.) Even today, he kept appearing on my social media inserted in memes my friends shared as his NATIONAL TREASURE character Benjamin Franklin Gates pilfering artifacts from the Capitol Building during the mob rush it endured yesterday. My friend Caitlin and I share a strange fascination with Cage, both through his work and his existence as a cosmic force. I have blessed or tortured her with many Cage-themed gifts on holidays over the years of our friendship. His personal life is as varied and unbelievable as his character work, and he continues to enrapture and confound even today. He’s just as multi-faceted in reality as he is on the screen, and you never really know what to expect from him at any given moment.

So, without any further ado, let’s get ready to Nic Flicks and Chill, with the first entry, RAISING ARIZONA. 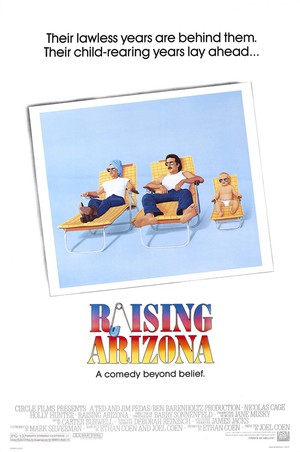 Joel and Etan Coen set out to make a movie that would be the polar opposite of their first film, BLOOD SIMPLE, and to this end they penned RAISING ARIZONA, a zany comedy romp featuring an odd couple at its core and a McGuffin so irresistible that every character that sees it yearns to claim it for themselves: an adorable baby boy named Junior. Junior is Nathan Arizona, Jr, one of a set of quintuplets born to a local furniture tycoon of the same name, who is kidnapped by the film's protagonists, H.I. McDunnough, a career criminal who robs convenience stores with an unloaded gun, and his wife Edwina “Ed” Hucket, a former police officer, when they discover they cannot conceive children of their own. Pretty soon it seems everyone knows the child they’re holding is illegitimate and everyone vies to get their hands on him with the intent of keeping him for their own. Hijinks ensue, laughter abounds.

Released in 1987, RAISING ARIZONA is Cage’s 9th theatrical film in a span of five years, an early hint of his tireless proliferation. “Hi” McDunnough is a criminal, to be sure, but he’s something of a kind soul. His wild hair and simple smile convey a childlike nature in the scamp, something akin to Chaplin’s Tramp. He’s a living cartoon, which keeps in line with the Coen’s vision of the film as a madcap romp, a live-action Merrie Melodie’s feature. His hair gets bigger when the action gets crazier, his speech more southern when he’s agitated, and his sleeves roll higher and higher when there’s work to be done.

I have to admit, I had not watched RAISING ARIZONA in probably thirty years or so before viewing it again last night. What shocked me was how vividly some scenes awoke dormant first-impressions of them from decades prior. Like the introduction of villain Leonard Smalls. I remember the close-ups on the baby booties, grenading the bunny, shooting the lizard. Those images in that introduction are seared into my film-watching memory from childhood. Randall “Tex” Cobb has been described by Joel Coen as “a force of nature” and even at a young age I recognized him as a character actor brought in whenever the filmmakers needed to scare the piss out of the audience.

Likewise the scene in which the Snoats brothers burst forth from the shitty earth outside of their prison, a la Shawshank, John Goodman bellowing like a newborn demon. Or the old man in the truck advising Hi that had “a panty on your head.” So much of this film sticks with the viewer after only one viewing. It's easy to see, even then, the penchant the Coens had for crafting memorable cinema. 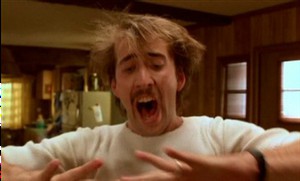 One thing I didn’t remember, however, was how early in his career Nicolas Cage was likely to go “Full Cage.” If you’ve seen more than one of his films then you know what I’m talking about: a moment where he chews up the scenery like a fucking leopard, going full ham and then some, giving carnal form to the Id in a display pulled from a visceral Chuck Jones nightmare. I first saw a hint of it when he’s driving the car with Ed in the passenger seat after he’s punched out Glen. (Side note: has Sam McMurray ever played a likeable character, and if not, what kind of toll has that taken on him as a person? Like, is he a dick in real life so it’s not a stretch? Or is he a super-nice guy who just has an awful vocal cadence and a face that people instinctively want to punch? So he keeps getting these roles and he knocks it out of the park and we all cheer when his character gets his comeuppance, then the director yells “cut” and he’s cracking everyone up on set and having beignets flown in from New Orleans for the whole cast and crew? This is what I want to know.) Cage’s Hi is starting to crack, tension hissing out at his seams, so to the point that he deliberately makes his voice smaller so as not to give the simmering rage any power. Then, when the Snoats betray him, he lets it all out, screaming on the floor of his trashed trailer home, a fitful ball of sinew and reddened skin.

There’s a fearlessness that Cage brings to Hi when he takes on adversaries considerably larger than him throughout the film, like Smalls and Snoats. Cage, only 23 at the time, is much smaller in this film, far from the action hero physique he would grow into for his big-budget hits of the 90s. To see him on screen taking on Goodman or Cobb is a David-and-Goliath fantasy. As mentioned, most of the film is fantasy, a child's cartoon caper, spurred onward by none other than Hi, himself, as our unreliable narrator. During the shootout scene wherein Hi is pursued by the Short Stop clerk, the police, and a neighborhood full of dogs, the human pursuers are shown to have revolvers, yet they fire ceaselessly and with impunity because they needn’t reload because nothing is real. In fact, if you haven’t watched the movie in the past year, give it another view and notice that Nathan Arizona leaves his gun in the crib with the quintuplets at the end of the film. At the end of the second act Hi attempts to leave Ed and Junior behind, even going so far as to write an eloquent letter of his intent, but the world turns against him before he can implement his abandonment, yet the damning letter is never seen again. 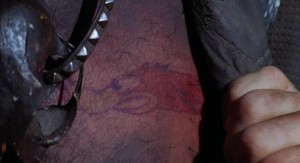 From his cute, unsophisticated woodpecker tattoo (which he shares with the demon Smalls, evidence that the latter was conjured by Hi to punish him for his sins) to his wardrobe of pre-Ace Ventura Hawaiian patterns and drab bowling shirts, Hi McDunnough is Cage at his most simplistic base, a chaotic good trapped in a simulation that slams his against various alignments of evil. Who better to bring life to such a character than Cage, himself, something of a manchild, at the time, with youth as a fresh memory?

RAISING ARIZONA is likely the first film that I knowingly saw Nicolas Cage in, and I knew even then that I would be following this actor’s career with curious interest. Thirty-three years later, I still am curious to discover what he will do next.

Until next time, y'all stay safe and stay sane!