They can't all be zingers. After watching OUTCAST for the first time for this column, I was actually looking forward to this next first: a viewing of the 2018 thriller BETWEEN WORLDS. Cage plays a character named Joe, and at first I thought it might even be a sequel to JOE, the 2013 film with Tye Sheridan (READY PLAYER ONE) which was actually pretty good.

After viewing the trailer I had a pretty good idea what I was in for. Check it out:

And I was wrong.

Netflix is now describing its film and television offerings with a singular descriptive word beneath the thumbnail so a viewer can decide on a title based on an adjective to match their viewing desire at any given moment. This movie is described as "steamy." I don't want to body shame anyone but I also don't want to watch Nicolas Cage in a "steamy" movie. I was put off by the sex scene in CITY OF ANGELS and that was filmed twenty years ago. Plus, Cage does an excellent job of making his Joe character rather repugnant, which I'm hoping is a conscious choice to further the narrative of Mary-inside-Billie's unusual attraction to him.

Perhaps I should clarify with a quick plot summary. SPOILERS AHEAD! 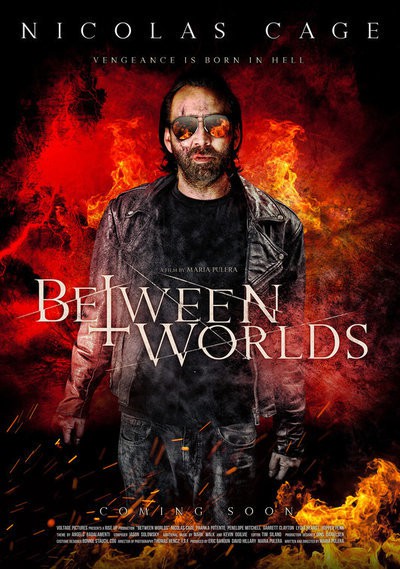 Joe is a down-on-his-luck truck driver, washing down No-Doze with his flask and arguing over nickels and dimes as he hardly has two to rub together. He is reeling from the death of his wife and daughter, some indeterminate time prior to our introduction, and his professionalism is clearly suffering. While on a haul through Alabama, he encounters a woman (Franka Potente, RUN LOLA RUN) being choked to death by a man in a bathroom stall. He comes to her defense, attacking the man, but rather than thanked he is scolded by the woman for his efforts. Upon further questioning, Julie, the choked woman, insists that she can enter the spirit realm if she is suffocating and was attempting to do so to recover the soul of her daughter Billie (Penelope Mitchell, "The Vampire Diaries") who was in a coma following a motorcycle accident. She asks Joe to drive her to the hospital, and once there Billie crashes again, forcing Julie to ask Joe to choke her to help shepherd her soul back to her body. Unfortunately, Joe is literally haunted by his deceased wife Mary, and it is she who enters Billie's body. While the latter rests for further checkups, Julie gets a ride back to her place and invites Joe in for coffee and whiskey and sex. THREE DAYS LATER (the screen actually tells us that) Joe and Julie bring Billie home, then Joe hits the road to deliver the goods he was hauling that were due three days ago. He is reprimanded for being shitty at work and life in general and his truck is seized. He gets back to Julie's place and crashes there until he can figure his life out. He and Julie resume their casual affair, now being watched by Mary-inside-Billie, who seethes with jealousy. Eventually she makes herself known to Joe when they are alone and he starts banging her. Julie quickly finds out so Joe tells her the truth, and she tries to enlist Joe's help to get her daughter back ('cause he's totally the guy to do that, right?). Mary/Billie knocks out Julie and intends to kill her but Joe asks her not to. They decide they need money to start a new life together so they go to rob Billie's friends, who might be drug dealers (it's not clear). During that robbery there is a struggle with a gun and a young man is killed. Joe and Mary/Billie go back to their old home, partially burned to the ground from Mary's accidental death. Billie's friend, whose name and performance are both insignificant, gently knocks on the door then attacks Julie demanding to know where Billie is, so Julie asks him to choke her so she can consult the spirit world and locate her. Which he agrees to because every male character in this movie secretly wants to choke Julie. They arrive at the house and confront the couple, which is when Mary/Billie reveals that she killed their daughter, Sarah, to deliberately hurt Joe, then accidentally caught the house afire. While a tense standoff occurs between Mary/Billie holding a gun on Julie and Mike (that's the insignificant dude) holding a gun on Joe, Joe gets up and wanders off, calling Sarah's name. Julie rushes Mary/Billie but is shot and as she slowly dies she crosses BETWEEN WORLDS and imprisons Mary with the soul of the daughter she callously murdered, allowing Billie to return to her body. She comes to and finds her mother dead, and she and Mike run from the house as Joe, overcome with grief in a drunken stupor, has set himself ablaze in the other bedroom. This sequence is set, bewilderingly, to "The Leader of the Pack" by The Shangri-Las. As the movie should be over but hasn't hit the 90-minute runtime that Pulera thinks is arbitrarily necessary, there is a final scene where a young Joe walks in on his drunken father berating his mother and points a shotgun at him, the report from which is heard as the screen goes black. 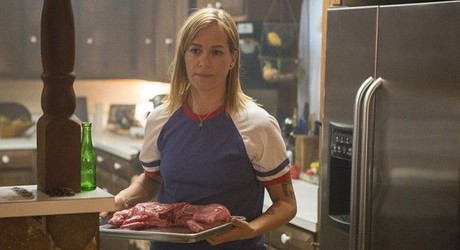 This is the second movie from writer/director Maria Pulera, and it is a discordant mess of a movie, with pointless premonitions that are attributed to nothing and offer no bearing on the characters within or viewers of the film. Characters' motivations, decisions, and overall composition are murky, nonsensical, or completely bereft. Nothing anyone does makes any sense, except perhaps leaping at the opportunity to choke Julie when given the chance. There's a tertiary nurse character who smokes a cigarette in a car with the windows up and lambasts Julie for her shoddy shepherding skills, even though she praises her for it early in the movie. Joe is, let's say, complicated, in that he occasionally shows signs of true altruism but also has a debilitating nefarious nature to him that destroys not only his life but that of everyone around him. When he helps Julie early in the film you don't get the impression that he's doing so for the possibility of sex but rather the genuine reward of preserving a family where he failed to do so in the past, but his literal ghosts fuck that up, too. The rest of the movie's runtime find him gobbling booze and drugs and oscillating wildly between reckless abandon and morose immobility. He's either leading a dance or a playful water hose fight or slurring his way through a demoralizing soliloquy on why he is undeserving of love. The multiple bands he wears on his wrist and the three rings on each hand seem less like a Joe choice and more of a Cage choice. Some of his acting is quite good in this film, but it's largely baffling. Watching Cage channel Joe takes one out of the movie regularly, focused less on what Joe is doing or feeling and more on what Cage is thinking or feeling. We find ourselves less interested in what Joe is doing and more befuddled by what Cage is trying to do.

Potente, who was amazing in RUN LOLA RUN, is vastly underutilized here and delivers some pretty abysmal dialogue with no passion whatsoever. Mitchell, who is a newcomer to my eyes, is actually pretty damn good and captivating in her scenes as Mary/Billie, conveying an otherworldly curiosity as she stares out of unfamiliar 18-year-old eyes. Pulera's direction of her own script is meandering, purposefully misdirecting, and ultimately unsurprising. Though I didn't get the movie I thought I would based on the trailer, that is not due to any clever work on the part of Pulera but rather clever editing on the part of the trailer cut. Some of the dialogue is inserted merely to shock and disorient, and none of the intentional comedy lands with any effectiveness. Which is not to say the movie isn't funny, because for all the wrong reasons it is. 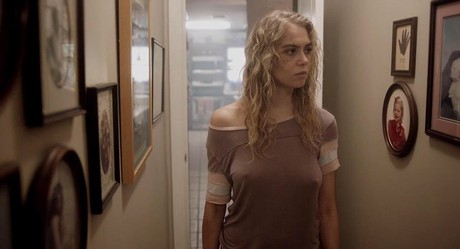 There are occasional moments of great cinematography, and a score that does more harm than good. The film borrows a theme from Angelo Badalamenti, frequent David Lynch collaborator, so it wears its influences on its literal sleeve. BETWEEN WORLDS takes a tired premise, thrusts it into a trailer park, and the results are exactly what you'd expect, with way more choking than you'd expect. I would tell you that I wouldn't watch this movie twice but I did, because I was pretty drunk by the time it ended on the first viewing. I then watched the "WandaVision" finale immediately afterwards and I can tell you, with shame in my voice, that the entire next day I could only think of this movie. I can also say that I've deliberately gone back and edited this article to replace the word "film" with "movie" when referring to BETWEEN WORLDS, as I don't think it classifies as "film."

If you're torn on a feature to watch and it absolutely must star Nicolas Cage, you could choose BETWEEN WORLDS, so long as you follow it up with something more indicative of his superstar career. In my humble opinion, BETWEEN WORLDS is a project that Cage attached himself to between bills, and I cannot recommend it to those who enjoy the "films" of Nicolas Cage.