We've had a good time discussing Nic Cage's cinematic offerings over three decades in our first few entries, but there's a whole catalogue to explore, and we can't do his career justice without sweeping out some of the cobwebs, as well.

I apologize that this installment is coming so late. I'd intended to release each episode on Friday of each week, but there were two mitigating factors holding me up this week. Work, and the fact that I was deliberately dragging my feet on this feature because I watched it a few years ago when it first came out and I fucking hated it. However, I hated it enough that it never left my mind, and I knew I had to take the opportunity to warn others who may accidentally succumb to the allure of Nic Cage and Willem DaFoe working with Academy Award- and Golden Globe-nominee Paul Schrader. The film is 2016's DOG EAT DOG, and upon the second viewing I found some artistic merit to this repugnant film of grotesque violence.

Having never seen the trailer until just now, I see it's cut to make you think this is a fun crime caper, with terrific comedic beats and a friendly trio at the heart. Sadly, that is not the case. This film is black as night and doesn't invoke the words "friendly" or "heart" at any moment in its blissfully brief 93-minute run time.

The film is based on the book by Edward Bunker, adapted by Matthew Wilder, and directed by Paul Schrader. Schrader is the screenwriter behind BRINGING OUT THE DEAD, RAGING BULL, TAXI DRIVER, and previously directed Cage two years earlier in DYING OF THE LIGHT. This is Cage's second film with DaFoe after their work in David Lynch's WILD AT HEART 26 years prior. It seems like all of the ingredients are in place to make an amazing stew but what we're left with is dog food.

I was lamenting to my wife a few days before the screening about how much I hated the film, and at one point I said "And it doesn't even look good! It's drab and muted, all dark and no noir." I was pleased to note on my re-viewing that I was wrong about that recollection. The film actually does some amazing work with color and frenetic editing. The opening scene, my major gripe with the whole feature, maximizes color saturation in a three-tone fever dream of pink, blue, and green. I invited a friend over to watch this horror show, and she kept asking why I hated it so much. I told her to set a timer and check back with me in ten minutes, then I pressed play on the film. In 8 minutes and 56 seconds she was gathering her things and giving me side-eye as she left, unsure if she should ever trust me with a remote control again.

"So it's provocative?" you're saying. Yes, but repulsively so. It doesn't glorify the violence but it doesn't condemn it, either. It's clinical, in a sense. It does glorify the money that immoral men can make performing irredeemable deeds for ever richer, less moral men. The trio of Troy (Cage), Mad Dog (DaFoe), and Diesel (Christopher Matthew Cook, who does impressive work) roust a small-time drug runner for their employer El Grecco (played by Schrader) and make a quick $9k which they blow on casino whores and cocktails. They yearn for a bigger score and get it when El Grecco introduces Troy to Chepe, who asks them to kidnap a baby so he can extort the $4M he is owed from the baby's father. The men weigh their options and go for it, but things don't go as planned. Soon they're on the wrong end of the mob, and if you believe the synopsis, the cops, too. Honestly, the only danger they have from the cops is their own propensity to fuck up their lives. In fact, the only reason there is enough tension to ratchet up the third act is Diesel's decision to stop by the grocery store and buy fresh meat from the deli while they're on the way to meet the mob. As he leans over the counter to accept the fresh cuts the gun in is waistband is briefly visible to the store's loss prevention and the police are notified. 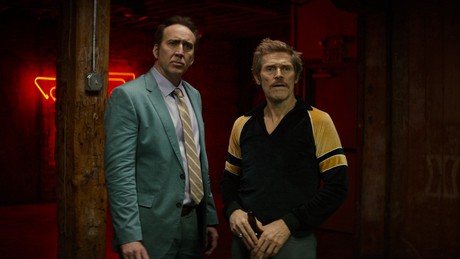 From there we cut to a fistfight between Cage and a lady cop, a shootout with the cops and Diesel, a car chase, and a heart stopping finale for dear Diesel. Tony is taken to a secluded area in the abruptly-descended night and beaten by two cops who resent his behavior, then handcuffed to a seatbelt and drug around for a while. In the next scene, he has escaped. There is no explanation for this. He carjacks an old couple leaving a diner, affecting his best Bogart impression, mugging through lines ripped from the '40s. When the couple is pulled over, Troy tries to distance himself from the car to spare the strangers before firing at the officers, but the ensuing gunfight leaves everyone, the guilty and the sick, dead. Just another night in Ohio.

As I said, Cook is a nice find. I somewhat recognized his face from a thing here and there but he was largely an unknown, and the infantile honesty he gave to the hulking Diesel worked to elevate the character into something resembling a third dimension. DaFoe's Mad Dog earns his name, from his brutal introduction to his whimpering end, and everywhere in between. Cage as Troy Palmer is oddly reserved. An ex-con who doesn't want to go back to the pen but knows the only way to ensure that is to rush headlong into a body bag, Troy aims to get as much money as he can and spend it as fast as he can before his ticket gets punched. Cage never goes Full Cage, or even a little Cage, which I think is a testament to the insanity of the film he exists within; to Cage It Up would just be too much, or maybe not enough. I honestly can't tell. 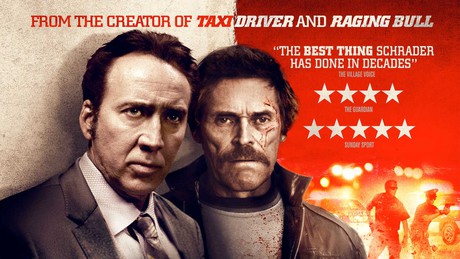 DOG EAT DOG is a strange entry in the filmography of an actor of Cage's ability. He's an A-List talent with charm, energy, and range to spare, as we will illustrate many times throughout this column this year. Occasionally, and recently, it so happens, he'll sign on to do something drab, dull, uninteresting, or just thoroughly unenjoyable. This film is firmly in the latter. It is occasionally boring but then shocks with violence so disgusting that the viewer is either petrified or electrified by what might happen next. There are decisions that are nonsensical and pointless, plotholes wider than DaFoe's trademark tooth gap, and the whole picture is bookmarked by gobsmacking scenes that make you wonder what you're doing with your life watching this shit.

Surprisingly, it has a 50% score on Rotten Tomatoes, meaning that of those who watched it and wrote their feelings down, one out of every two didn't hate it. By that math, it's likely you'll find something to enjoy in DOG EAT DOG. I tried to be objective in my treatment, yet still honest enough to let you know in no uncertain terms that I fucking hated this movie. That said, I sure can't seem to shut up about it, so it's obviously an effective piece of shit art.

We're heading back to a theatrical release next week, which I, personally, am looking forward to. Until then, stay safe and stay sane!