Howdy, y'all! McEric here with Episode Eleven of The Year of Nic Flicks. I realize I'm a bit behind schedule so let's get right to it: this week we're talking about LEAVING LAS VEGAS, the 1995 drama written/directed (and scored) by Mike Figgis; the film that won Cage the Academy Award for Best Actor in a Leading Role. It's been over twenty years since I'd seen the film and I must say, as an adult, it hits VERY differently.

Let's check out the trailer:

I viewed the film this afternoon before heading to work and I have to admit, I was mesmerized. I made a concerted effort to not let the Academy Award-win bewitch me and just view the film as another Cage vehicle, yet I was still genuinely moved by the viewing experience. Is it Cage? Yes, but it's so much more than that. Elizabeth Shue is so amazing in her role as Sera, a firm departure from her previous work in light-hearted comedies. Julian Sands' Yuri is an odd prickle of an enigma, and spotting A-list actors in supporting roles is a fun exercise throughout the film. I was mainly blown away by how perverse the whole film is. If one had read the synopsis they would have known, but when you hear the critics rave about it, you seem to convince yourself it's high art.

"Adapted from the novel by John O'Brien, this acclaimed drama follows alcoholic screenwriter Ben Sanderson (Nicolas Cage) as he drinks himself into oblivion in Las Vegas. When Ben meets the beautiful prostitute Sera (Elisabeth Shue), they strike up an unconventional relationship -- one where she can't ask him to curb his drinking, and he can't fault her for her job. Though they offer each other support, Ben's self-destruction threatens to eclipse their bond." 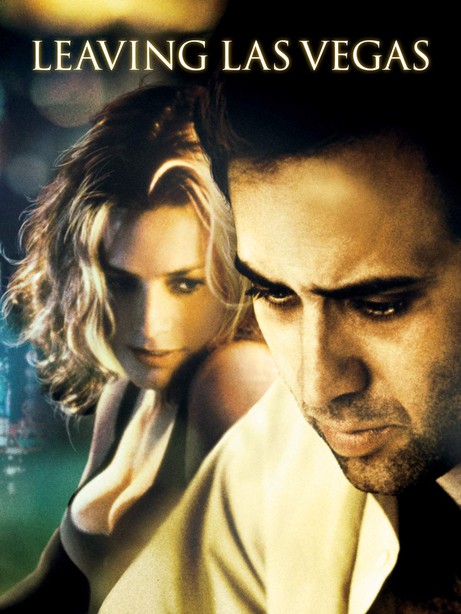 Watching this film as an adult opened up so much more of its nuances to me. Everything about the film pays off. The cinematography and editing were heavily awarded during its initial run, and though I can agree with the former I question the latter, though maybe that's just 25 subsequent years of film weighing down my opinion. Scenes often fade to black before moving on with the story but at sequences that don't seem to make much sense. Frankly, in my humble opinion, some of the tension is lost through the editing. However, I'm putting the cart ahead of the horse. Let's really break this beast down.

The film follows no consistent narrative structure in that we meet Ben independent of Sera though most of the subsequent film is chaptered, or at least peppered, by Sera's visits with her therapist, whom we never see or hear. The film ends with this exchange, also, which seems to give the impression that it was her story all along, though that's not how we, the viewer, have seen it.

When we meet Cage's Ben Sanderson, he is already at the bottom. He's stocking up on booze like he's found an old piece of paper that lets him know when the world will end and it's soon, then he later asks for help from a character played by Richard Lewis. 1990s Cinema Hack: if you want to establish that your character is at the bottom of the social chain, show them groveling to a character played by either Richard Lewis or Steven Weber. Ben drinks himself to the point of absurdity and propositions women for pleasure. He mentions that his wife has left him, and we learn through context and photos that he had a daughter, as well. We don't know if his drinking has become so out of control because of the separation or was the cause of the separation, but we see things come to a head when he is let go from his career position as a screenwriter, along with a hefty severance. He packs up his house, burns many belongings, and drives to Las Vegas. He explains later in the film that he did this because in Los Angeles he would lose track of time and run out of liquor after the stores were closed.

It's details like that which make the film so perverse. Las Vegas, beautifully photographed in aerial view during the opening credits, is never again given any lustrous treatment in the film. The whole picture is an indictment of Las Vegas, where nothing is fair, nothing is gold, and everything ends. Even as Shue's Sera is talking about how her life is where she wants it to be, we the viewer are shown unquestioningly that it is not. Ben came to Las Vegas because it's easier for him to drink unchecked, and ultimately kill himself. Sera ended up in Vegas because Los Angeles was just too competitive.

Ben's cinematic journey finds him brushing up against Polish mobsters, almost running Sera over on the strip, and selling his watch in the same pawn shop within which Yuri tries to convert some jewelry to cash. It's all very Save the Cat, and we have to allow for some movie magic to play out along with our visceral realism. Indeed, the frequency and ease with which Sera and Ben find one another repeatedly smacks of movie magic, but then again I've also been to Las Vegas several times and for all that it is, it's really just a few blocks where everyone is in one place but no one is anywhere for very long.

After Ben and Sera's meet-cute, they cross paths again and Ben "hires" Sera for an evening, though after some felatio he is convinced he can't be a sexual partner. He asks her to stay and they fall into an easy camaraderie. As the film progresses it is evident that the overarching theme is control. Yuri wants to pretend he has control but quickly discards it when he realizes he doesn't. Sera is always seeking control; controlling Yuri through pity, men through sex and expectation, and Ben through acquiescence. Ben is surrendering all control, leaving his home, selling his car, and even selling his watch; he is independent of time and space, therefor a microbe in the enormity of both.

Sera falls for Ben for all the things that he's not. He's got Whiskey Dick so he's not a John. He's actively dying so she can always overpower him, and he's so focused on his own destruction that he can't manage or critique someone else so he's no Yuri, either. He's an easy mark; a Jenga-board of immolation that might enrich the nearby soil and nurture a flower to grow. Sera loves this man because he's easy to destroy, or let go, or escape. Ben loves Sera in a way that makes sense at 2:10am when the house lights come up. There's nothing artificial in either of their hearts; their love is real to them. What's real to us, the viewer, is an abysmally dark secret that should be common knowledge if we could only speak aloud the truth that permeates:

If someone wants to die, your love will not save them. You can love someone and not save them. Someone can love you and still not fight to stay alive if their mind is made up. 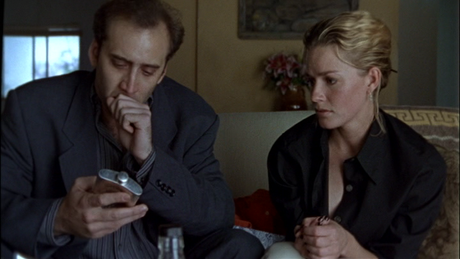 Ben and Sera are an odd couple, to be sure, careening through set-pieces and receiving smiling, saccharine-laced chiding from good, upstanding folk all around them. Early in the film, Ben, ever the screenwriter, dictates a soliloquy into his tape recorder while in line at the bank regarding transforming the object of his affection into a fountain of bourbon. The people in line stare on in awe, seemingly entranced. Later in the film, unknowing of the taped exuberance, Sera makes herself into the bourbon fountain, allowing Ben to suckle flowing booze over her nipples poolside. Just when you think they'll finally intertwine, Ben falls over and breaks a glass table, and the hotel matron comes by to clean it up and informs Sera that they need to check out and never return, all with a smile. When Sera arrives at her apartment after a beating and gang-rape, her landlady (Laurie Metcalf) decides it's a good time to kick her out. Never underestimate the decency of an entrepreneur. The poetry of these exchanges is that it asks us to question our position on the protagonists: what do we think of them? We're rooting for love, but we're also tuned in for the drama. We won't necessarily twist the knife in but we do want a super-close-up when it pierces the flesh. Like Sera herself who gives Ben a flask as a homecoming present, we want our characters to get what they want, even if what they want isn't even remotely healthy.

LEAVING LAS VEGAS is a haunting film that stays with you after you view it. You'll spend days reckoning Ben's oscillating innocence and savagery, delighting in his use of language and dramatic affectation. It really was a stroke of brilliance to make Ben Sanderson a screenwriter; Figgis could step right inside of him and address us directly, allowing flowery language to live in the efficiency of celluloid. He could tell AND show. While Ben's story finds conclusion, you'll find yourself wondering after Sera; where she went, what she carried with her. Perhaps most importantly it will make you look within yourself and ask a few questions that may have never occurred to you, most important among them being a morbid twist on the classic "What would you die for?"

The music in the film repeats often, giving us the limited headspace of a mind closing down. Having Sting, Don Henley, and Michael McDonald croon out some jazz standards is a nice touch, a tone of familiarity with a hint of mystery. A lot the instrumental jazz borders on acid, wavering between gentle and cacophonous. It's a drunkard's inner jukebox, and it adds so much to Cage's performance. 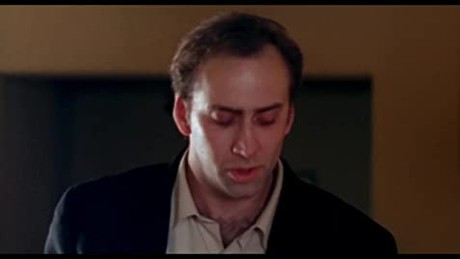 Cage had just finished KISS OF DEATH when he went to work on this film, and afterward he jumped into his action trifecta. To prepare for this role he went on a binge in Dublin, asking friends to tape him when he got sufficiently schnockered and then studying his own speech patterns. He let the muscle he'd gained for KISS OF DEATH atrophy to fat so that he had a somewhat "melted" appearance, and his hair is doing its own thing. Makeup kept his eyes permanently encased in reddened lids, and his pout is permanent. Cage was nominated for the Academy Award alongside Sean Penn for DEAD MAN WALKING, Anthony Hopkins for NIXON, Richard Dreyfuss for MR. HOLLAND'S OPUS, and Massimo Troisi for IL POSTINO. Did he deserve the award? Absolutely. Did he deserve it over these other men? I can't be sure. I'm sure many people have their opinions.

LEAVING LAS VEGAS is one of my uncle's favorite films of all time. Interestingly enough, he doesn't drink and at the time that this film made his list he had never been to Las Vegas. I asked him earlier this week why he revered the film so much, and he told me "The internal struggle of wanting to make up for past mistakes and send away the anger. Not being a drinker makes it sound weird, but wanting to escape it all is understandable. Also, the fact that two damaged people can love each other while looking past their obvious flaws." I thought about this while watching the film and I agree, even though I still believe their relationship was more about control.

If you've waited twenty-plus years to watch this film again I would most definitely suggest dusting it off. It's romantic in a dirty way, heartfelt in a hedonistic way, and cleverly written and brilliantly acted. Until next time (which should hopefully be much sooner), stay safe and stay sane.