After several offbeat roles and a few leading man turns, Cage made the transition to full-blown action movie star with three back-to-back-to-back blockbusters from 1996 to 1997: THE ROCK, CON AIR, & FACE/OFF. Many believe they are the zenith of his career; a kind of holy trinity. Then, capitalizing on that meteoric rise and his chiseled leading man physique, he went on to make…

CITY OF ANGELS, a tender love story of a sensitive angel who falls in love with a thoracic surgeon in the heart of Los Angeles. Because sure, why not? Check out the trailer:

CITY OF ANGELS is written by Dana Stevens (who’s written a good deal of lovey-dovey works including an adaptation of Nicholas Sparks novel) based off the 1987 film by Wim Wenders, Peter Handke, and Richard Reitinger. The film is directed by Brad Silberling (CASPER, A SERIES OF UNFORTUNATE EVENTS) and stars Cage along with Meg Ryan, Dennis Franz, Andre Braugher, and Colm Feore. Everyone plays exactly the characters you imagine they would; Ryan is the object d’amour, Franz is the portly fellow with a ravenous hunger for life, Braugher is the level-headed listening post, and Feore is a brilliant surgeon. There is no surprise casting, not even Cage as the romantic lead.

As I’ve said many times, Cage defies convention. His steely eyes can peer into your soul with equal menace or compassion. During the nineties he became something of a heartthrob, ending up on pillowcases and in Japanese commercials. No, I’m not kidding. I actually got that pillowcase for my friend Caitlin who has yet to decide if she’s strangely attracted to, oddly fascinated by, or ultimately disgusted with Nicolas Cage. 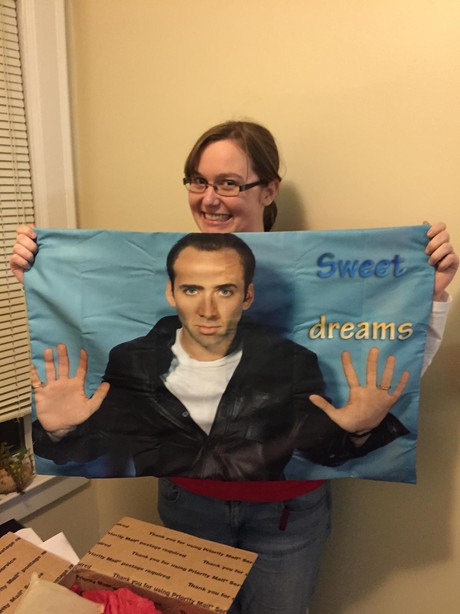 Okay, maybe that commercial isn’t as sexy as I remember, but you get the idea. So it wasn’t a crazy stretch of the imagination that Nicolas Cage could be a beautiful angel, free of the concerns of the living. Cage’s Seth knows no pain or hunger or fear or loss. He observes humankind along with his hundreds of freaky stalker angel brethren, clad in black with long coats, standing more like sentinels than celestials, listening in on our thoughts and occasionally touching us to soothe our aching souls. We’ll get back to aching.

The film opens with a mother’s feverish worried thoughts as she’s caring for her young daughter who is lying sick in bed, eyes locked with Seth as he sits by her bedside. The mother tries everything to bring her daughter back to optimum health, but soon they’re at the hospital. Seth is there, too, calmly observing the chaos, keeping a vigil alongside the little girl. In a clever reveal, she is suddenly standing next to him, the body that was hers flatlining on the gurney in the next room. He says he’s going to take her home, and they walk down a hallway that gradually gives way to a bright, all-encompassing light. He asks her what her favorite part of life was, and she says “pajamas.” Conveniently, she’s wearing them at that moment.

After the title card we find Seth sitting atop an exit sign on the 5, talking about his day with his colleague Cassiel (Braugher). Seth writes his findings in a notebook and shares them. The girl with her love of pajamas, strangers who shared an inadvertent touch in an elevator, and the girl’s wish to be an angel, like them. The script uses this device to dump some exposition, and it’s actually kind of important to the story, so the clunkiness can be somewhat forgiven. Seth has to explain that angels aren’t the souls of humans who’ve died and been given wings; they’re something else, entirely. They’ve never been human, and don’t share our predilection for gluttony or ecstasy or hoarding. They’re perfectly unlike us in all the ways that make us lesser, but it’s those things that make life worth living that lie beyond their comprehension and keeps them from ever yearning for what we have.

When Seth is on a routine “taking” he meets Maggie (Ryan), and for a moment he thinks she looks right at him. He imagines she’s seen him “as a man.” Still on duty, he takes the soul of the man upon whom she’s operating, causing her grief. He finds her alone weeping in a stairwell after telling the family and touches her to comfort her, but it doesn’t seem all that effective and she doesn’t see him. He talks to Cassiel about it while they walk in a liquor store, which is quickly robbed. Seth and Cassiel work their angel magic to calm both the cashier and the robber so that cool heads keep everyone alive. Nice work, fellas! 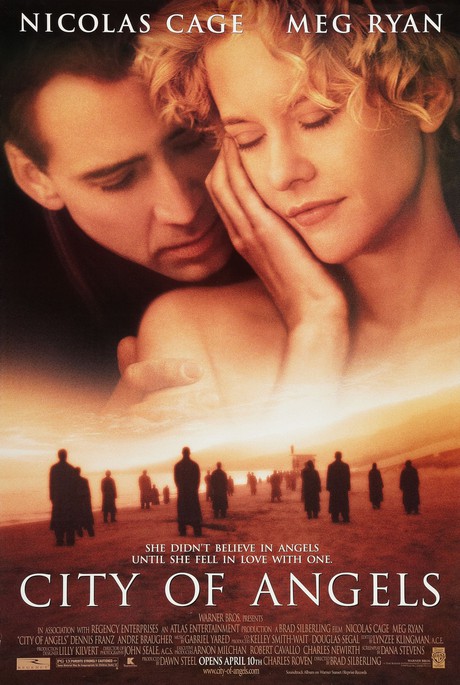 Maggie pushes her next surgery a couple of days to get her head on straight, and tells the patient, a Mr. Nathaniel Messinger (Franz). Messinger seems to know that Seth is nearby and calls out “I can’t see you but I know you’re there.” Seth allows himself to be seen and talks to Messinger, who reveals that he, himself, was once an angel but he gave it up to be human and experience life. As Seth has fallen hopelessly in love with Maggie, he listens with keen interest.

Seth has started talking to Maggie, trying to comfort her while also learn more about her, and by proxy all of human life. He holds her eyes too long, shows up unannounced at seemingly every location she visits, and skirts simple questions with vague half-truths. So of course she falls in love with him. One of my favorite lines in the movie is delivered by Maggie while they’re at the dog park, and she’s trying to determine what Seth’s “deal” is, as pertains to his claims that he lives in the library, works as a messenger, and always wears all black clothes.

“Are you a drummer?”

At one point Maggie eats a pear and Seth asks her to describe it, as Hemingway would. She does her best and it’s not bad. He asks her many questions about the human experience: feeling, tasting, crying, smelling. It’s these scenes that make Cage’s casting make the most sense. A case can be made that he’s not like you or me or anyone of us, not of this mundane race of meatbags. Seth being perplexed by an idiom seems a genuine reaction coming from Cage; I’m sure he occasionally looks at us with that same sad curiosity.

Seth chooses to be human, and after some Cage-y celebration of his newfound humanity, he goes on an adventure and finds Maggie. What should be impossible for a man with no money or experience using a phone or map turns out to be Super Easy, Barely an Inconvenience, and he’s soon under her care at her uncle’s cabin near Lake Tahoe. They share a passionate night together, and here’s where the “aching” returns.

The film manages to be romantic despite a lot of non-consensual touching in the first two acts and what is just clearly stalking, even though it’s being perpetrated by an angel. The romance is challenged (though not in the way you might think) when Seth and Maggie are finally able to explore one another’s bodies with the knowledge that each can truly feel the other. The intimacy implied in the scene is so deep, their connection so strong and sensual, that it plays, in relation to the rest of the film, almost too sexual. It’s a bit unnerving how close they are to one another, the odd way their breath catches, and then when it’s clear Maggie is giving Seth a handjob, she asks him to describe it. “Warm. Aching,” he replies. It’s jarringly dirty in a PG-13 film about angels and suffering. It’s Silberling’s LAST TANGO IN PARIS.

With that out of the way, Seth takes a shower and Maggie makes a meal, but realizes the fruit salad is missing something. She bikes to the nearby market and grabs a few spices, then as she’s biking back she lets the wind caress her face while she throws her arms wide in the Jesus Christ pose of a woman who has found bliss in the most unlikely of sources. The joy, the peace, is palpable.

So, of course, she is struck by a logging truck and dies. Leave it to America to remake a German film and somehow make it bleaker and more existential than the Germans. Just rude.

Seth is now alone, though we get to hear Sarah McLachlan sing a song so I instinctively turned and started petting my cat as soon as I heard her voice. Luckily Seth has one human friend, so Messinger hooks him up with a job and a place to stay. Seth goes to the market and buys ALL THE PEARS. He sits on his sofa in the dark and stares at nothing. Finally he starts talking to Cassiel, and when Cassiel asks him if he’d still have made his choice if he’d known this would happen, Seth gives the response that’s impossible not to have heard or seen if you have a Live, Laugh, Lover in your life. 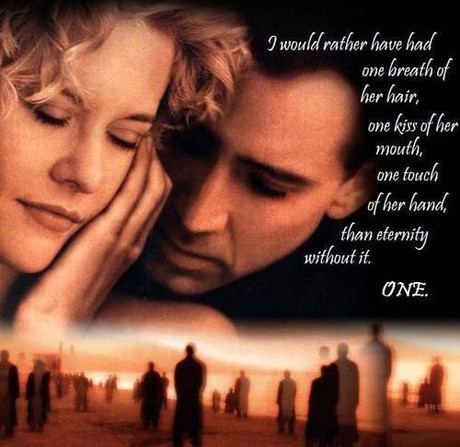 Seth continues to ache, eat pears, and ultimately live. In the final scene he goes to the beach where he knows the angels gather at sunrise and sunset and leaps into the ocean, bodysurfing the waves as they roll to shore. As he comes up for air, the saltwater thick on his face while the current below pulls at his feet, he smiles at all the sensations he’s feeling, and we have to believe it’s going to be okay.

I know it sounds like I’m shitting on this movie but I actually like it. It’s a fascinating concept that, surprisingly, doesn’t get too preachy, and the scenes of grief are actually affecting. I can’t quite say I follow the love story line, as I can’t find it feasible that a surgeon could fall in love with someone she’s fairly convinced is homeless, delusional, a stalker, and quite possibly a drummer. In the lens of 1998, however, it is totally believable that anyone could fall in love with Meg Ryan.

What’s particularly strange to me is the legacy of CITY OF ANGELS. Perhaps my recollection is askew but I recall it being the biggest movie in the world when it came out and now no one talks about it. It came out and crashed our collective awareness and then rolled away like an ocean wave, leaving nothing behind it but that ubiquitous Goo Goo Dolls song. To be fair, it didn’t age well. Beepers and phone books are huge story points, so millennials are automatically excluded from enjoying it.

I also find it strange that such a down-the-lane “normal” film seems like one of the more bizarre entries in a column like this. CITY OF ANGELS is a far cry from DOG EAT DOG but that’s another testament to the range and voracious tastes of one Nicolas Cage. Speaking of, next week’s selection is another straight-to-streaming offering that I haven’t seen before, so I’m excited to discover what my reaction will be. I hope you are, too.

Until then, stay safe and stay sane (in the arms of the angels).