Nic Cage is RUNNING WITH THE DEVIL in New Crime Thriller

Howdy all! McEric here with a review for the newest Nicolas Cage film and boy is it a doozy! Check out the trailer here:

The synopsis is: When a cocaine shipment is compromised to the dismay of a drug cartel’s CEO, known simply as The Boss, he orders his most trusted henchman, The Cook, and his partner, another master drug trafficker known as The Man, on a dangerous journey to audit the company’s supply chain. As the drugs make their perilous trek across international borders, past gangsters, refiners, and couriers, they are also being tracked by Federal Agents. When The Cook realizes where the network is breaking down, it may be too late to keep the cartel satisfied.

Now if you’ve read any of my coverage on this site, you’ll recognize that I’m quite forgiving when it comes to a lot of movies. I have to admit, I love movies! I love tuning in and taking a journey with them, escaping my head for a collective journey of writers, directors, actors, and the hundreds of people who make film possible. It’s a truly collaborative artform that is presented to us as a gift, and I appreciate the effort and intent that goes into making a film. 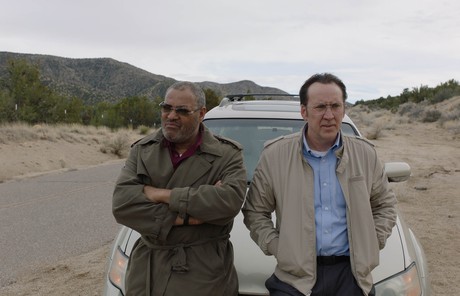 That being said, I did not like this movie. It wasn’t terrible, and I didn’t hate it, but after it ended I felt that I had wasted a large amount of time viewing it. Let’s unpack it, shall we?

First off, the cast is awesome! Laurence Fishburne (A NIGHTMARE ON ELM STREET 3: THE DREAM WARRIORS), Adam Goldberg (THE HEBREW HAMMER), Barry Pepper (BATTLEFIELD EARTH), Clifton Collins, Jr (THE BOONDOCK SAINTS II), Peter Facinelli (CAN’T HARDLY WAIT), and Leslie Bibb (TALLADEGA NIGHTS) all turn in favorable performances, and Nic Cage is steady and focused in the film. It’s some of the best work I’ve seen him do this year, and that could have something to do with the fact that he doesn’t ever go “Full Cage” in this feature.

Not that there’s anything wrong with “Full Cage”. It has its place, and if it’s what you need, there’s only one man who can give it to you. 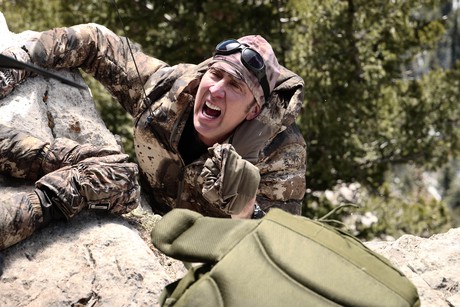 Fishburne is having too much fun, Collins is a solid anchor, and Pepper oozes smarm. Cage, himself, plays The Cook as cold and calculating, a man of strict expectations and practices. The acting is good, the camerawork is beautiful, and the production is top notch. As a Nic Cage Movie of the Week, this one stands above its peers in terms of talent and quality.

As the trailer promises, you will see the supply chain of cocaine “From the Fields to the Street”. Every agonizing step. As a starter course on Cocaine Growth, Refinement, and Distribution, the film is excellent. However, if you’re not in the mood for a documentary that WILL be on the final exam, people, then you’ll find your time ill spent watching this movie.

I suppose the documentary comparison isn’t an apt one, on second thought. Documentaries often employ long, extended takes on a singular subject, allowing full integration for the viewer. RUNNING WITH THE DEVIL employs frequent cuts, to the point that the viewer feels as though they’ve been snorting cocaine before the opening titles. It’s as though writer/director Jason Cabell feared staying in any one scene too long lest his lack of human understanding peer out between the cracks of his Schoolhouse Rock segment on how a coca plant becomes a Bag of Party. (Someone please compose that song for me.) 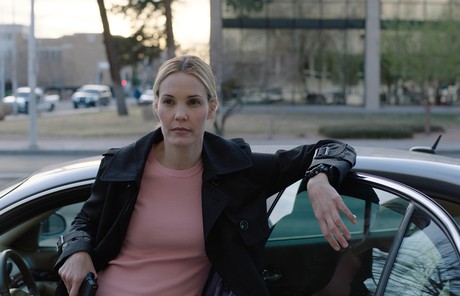 Add to this Leslie Bibb’s Agent in Charge pursuing our nefarious ne’er-do-wells throughout with a dogged determination that seems to have virtually no motivation, conducting clandestine phone calls with a shady character who is never explained, and ending the film with an act that seems to come from nowhere at all, RUNNING WITH THE DEVIL just falls so flat.

Jason Cabell has weaved together many moving parts and some pretty committed performances to make a film that cuts so frequently in an attempt to fit so much information within that the pacing of the actual “story” seems glacial. By the time the conclusion starts to materialize the viewer no longer cares; their brain cracked under their new knowledge set and too many characters for their valuable care or attention to handle. It’s a 100-minute unabridged version of George R.R. Martin’s Song of Bullets and Snow.

RUNNING WITH THE DEVIL releases in theaters, as well as On Demand and Digital Streaming, this Friday, September 20th.

Until next time, I’ll see y’all at the movies (but not this one)!