Hey friends, Barbarella here.  I spoke with director Neil Marshall about THE RECKONING, which premieres on SHUDDER today.  When Grace Haverstock (Charlotte Kirk) is unjustly accused of witchcraft after her husband dies during the Great Plague, she must endure physical and emotional torture at the hands of a ruthless witch hunter (Sean Pertwee). 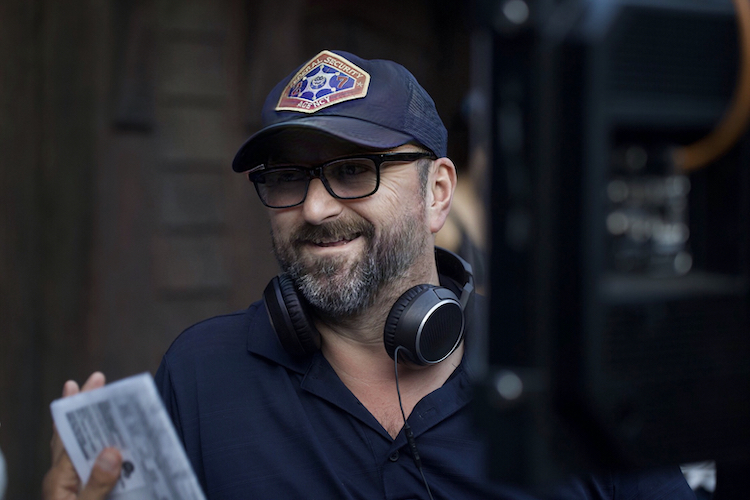 I love the score for this. Would you talk a little bit about working with Christopher Drake on it?

“I've been wanting to work with Chris for ages. I guess he's always been around my circle of friends in LA, but I really first encountered him when we made TALES OF HALLOWEEN, and he scores at least one, if not a couple, of the segments. I got to meet him through that, and we got chatting away, and it just seemed that his sensibilities were just so much in line with mine. I think through all my films, I've been looking for – for want of a better description – my John Williams, that composer that just hits everything you want him to hit, just does it perfectly.  I had previously tried to get him on board “Lost in Space,” when I did that, but that didn't work out, so this really presented me with the opportunity to work with him and allow him creative freedom to just do.  I had my ideas and thoughts, of course, but I just let him run with it.

“It was a great process. He had his own studio set up.  He would just go off and do stuff and give us samples, and then I'd give him notes on that. But it was a very, very easy process because he just hit the mark every time. Some of his ideas were exactly what I wanted. I think I only had one specific request, and that was to incorporate some fiddle music into something, which he did. And really, the rest of it was like, I wanted something epic and sweeping, both romantic and terrifying, and just big, and that's what he did.  I love that score so much.”

Yeah, it's amazing. I love it.  THE DESCENT is one of my favorite horror films to come out in the 21st century, partially because I love the way that it represents the female perspective, and you wrote that all by yourself, so I think that's awesome. With THE RECKONING you co-wrote with not just one other writer, but two other writers.  Why did you opt to go that route? How does that work logistically when you have multiple voices contributing to the story?

“Well, the way that it worked was that Ed [Evers-Swindell], who was the third writer, actually brought a rough outline to Charlotte [Kirk] and me in early 2018. It started out similar, but it went off in a very, very different direction to where we wanted to take it, so we hashed out that plot line a bit, and then Charlotte and I took it over completely and just dove headfirst into research of the period, because we wanted to make something that was a lot more grounded and realistic and had something to say about the misogyny of the time, about the bias and the brutality toward women at the time.

“So yeah, we just decided to cowrite it, and it proved to be a really fruitful collaboration, because I'm coming at it from a horror perspective, and she's coming at things from an actor, left-field perspective, not being into horror. She is now; we converted her, but back then, it was like she was less into horror films, so she was seeing it from a more dramatic perspective. I think we met in the middle on what we came up with, so it served multiple purposes.  Yes, I wanted it to be scary, but I also wanted it to have something dramatic and important to say. It was relevant to today's audiences."

What, if anything, surprised you when you were researching witch trials for it?

“The thing that surprised me was just the sheer number of people involved. When I heard the figures, it was like a half a million to maybe even a million women tried, tortured, and executed for this crime, which, for all intents and purposes, doesn't exist. They weren't flying around on broom sticks; they weren't communicating with the devil. Most of them were completely innocent women, falsely accused on trumped-up charges of God-knows-what because their landlords didn't like them, or their neighbors didn't like them, or their husbands didn't like them, or somebody had a bug to bear or was jealous. Whoever it was, usually a man, was able to essentially just bring these charges.  Nobody could get up and say, "This is bullshit," because it was the church; it was God.  If you stood up to defend these people, you would probably get accused too, so it was living in complete fear all the time. And yeah, I just found that concept terrifying.”

Yeah. I'm really glad I wasn't around in those days.

This film touches on the paranoia that the plague caused. How did you feel when suddenly COVID came along and made this film frighteningly relevant?

“Well, it was just bloody awful, generally, but it's like for the film’s case, is this going to work for us or against us?  When COVID started, everybody started watching CONTAGION and OUTBREAK on Netflix, and I'm like, "Okay, well, how's this going to affect the movie?" A year later, and everyone's like, "Oh God, plague, we’re fed up with it." My whole thing was this movie is not about the plague. It just happens to be set during a plague, so it'd be wrong to categorize it as a plague movie, but there is essence in the plague; it's important to it, the masks and things like that. It just proved to be strikingly relevant. That was the scary part.  We shot this a year before COVID happened.”

Are there any particular techniques you use when directing a person being tortured?

“You don't want to physically talk to them in order to get the performance. It's like making them as comfortable as they can possibly be so they can focus on the performance, but, that said, when you're strapped to this X-frame thing for long days, comfortable goes out the window, and this energy takes over. It's really just treating the actors with respect through something like that, and it’s torturous, literally and physically, in so many other ways. And you just got to give them the head space and the physical space and the circumstances by which they can focus on the job at hand.”

Of all the torture techniques that you researched, was there one that freaked you out more than the others?

“We actually had to choose two that weren't lethal because most of the ones that we found were lethal, just basically different ways of executing people slowly.  Cutting them in half slowly or throwing them in rivers and drowning them slowly, whatever it was, they were all deadly. We were able to find these two, which are genuine, which we figured you could survive. They might not be pleasant, but you could survive them. And they're both very real. The Pear of Anguish is a shocking device invented by some sicko. There’s one in the tower of London, and I've never seen it in a movie before, so I thought, "Okay, it's something new, but it's relevant, and it's real."

How long do you think you could hold out if you were being tortured?

“Or you just think about it and go, "You know what, I'll tell you everything you want to know."”

What was the most difficult effect to capture, and what made it such a challenge?

“The devil was quite tricky. Actually, no, the most difficult one was the devil coming out of the pool, because we had a seven-foot-tall guy.  We had to dig a hole at the bottom of the set, and we could never quite get the hole deep enough. We filled it full of this black gunk, and he floated, so I could never totally get him submerged.  It worked in the film, but trying to make him look like he was coming out of a puddle on the floor was tricky.”

Last year, there was a lot of talk about pivoting to make ends meet. And I feel like half of filmmaking is pivoting. So, in what ways did you pivot in this film to make a scene work?

“Well, there was a lot of that going on in the prep and things like that. We were told basically that we could only afford rain on one day, so which scene was it going to be?" And I was like, "Well, I have to have rain on the burial scene." But the scene where she got abducted, which was meant to be raining, we still made it stormy.  We had it windy.  We had lightning, but no rain. I remembered seeing that in the Western TOMBSTONE.  There's a scene where they’re out in the streets, and there’s lightning, but there’s no rain, and I thought, "Oh, this is actually a really cool effect. It's like the storm hasn't gotten there yet, but it's coming." So, we used that.

“But every day, we were pivoting one way or another. I think one case, I'd asked for a rig that would have the sword going through [someone’s] side, and we couldn't make it work at all, so we reinvented it on the day to have a stool break and stab that into his side, and then it's like, "Just stick it under your armpit.”  Old-school techniques, those old tricks still kind of work as long as you don't dwell on them too long.”

If you're interesting in seeing some torture, hearing an amazing score, and watching a seven-foot devil emerge from a puddle in the floor, THE RECKONING may be seen on SHUDDER starting today.  Check out the trailer.