Howdy, y'all! McEric here again with an update on the Disney+ series "WandaVision." I've already discussed the first two episodes and all the questions arisen by those, and now we have two more episodes full of information to process. And if you've been holding off on the series because you weren't sure if you'd like it or if you're a fan of the Marvel Universe and see little connection to these nostalgia-tinged misadventures, I am telling you that episode four is your definitive call to get on board.

If you haven't seen Episode Four I'm about to go into spoilers for those of us who have so we can discuss it. There's a lot to unpack, and though we got some answers, we've also got even more questions.

At the end of episode two it is revealed that Wanda is pregnant and the show begins to broadcast in color. In episode three we see Wanda's advanced gestation period and within a day she gives birth to twins. The doctor who consults on the procedure was planning to take a vacation at the episode's start but at the end he reveals he'll likely never get away. "Small towns..." he says, and with those ominous words he leaves a befuddled Vision. Geraldine happens to stop by the WandaVision household and ends up delivering the twins, whom momma Wanda beams down at as she dreamily recalls that she, herself, is a twin. She mentions Pietro and then starts to sing a wistful lullaby in her native Sokovian tongue. Geraldine looks at her and asserts "He was killed by Ultron, wasn't he?" This snaps Wanda from her current trance and into another one as she questions Geraldine about who she is and why she is there, and why is she wearing a necklace with a S.W.O.R.D. pendant around her neck? While this goes on inside, Vision is outside chatting with Agnes and Herb, who reveal that Geraldine doesn't belong there, and almost lets slip what the true nature of the town may be. Vision enters the house and mentions to Wanda that things seem askew, but once again the show rights itself through a choppy edit and re-enactment, further evidence that Wanda or something else are willfully keeping the illusion going. The episode ends with Geraldine bursting out of a forcefield and landing on the ground, swarms of modern, stern military men forming around her.

Trippy, right, but still carrying a lot of the 70s groove and meta-laugh track. Even a popping disco-funk intro song.

The episode opens with Monica Rambeau reforming in a chair much in the same way that characters disappeared in INFINITY WAR, only in reverse. The chair is next to an empty hospital bed, so she goes out of the room into a scene of chaos as people begin to manifest from nothing, slamming into one another and causing all manner of fear and uncertainty. Doctors and nurses are calling out to each other that they're over capacity, and we realize we are seeing the effects of Banner's snap, bringing back all those who were lost when Thanos banished them out of existence five years prior. What we learn from Monica, however, is that she believes she's only been gone a few minutes, and was in the hospital visiting her mother Maria after a successful surgery. Successful though it was, Maria passed away two years later, three years prior to the moment Monica found herself in now.

She heads to work, at S.W.O.R.D. and is given a terrestrial mission to assist the FBI in a missing persons case. There we meet up with Agent Woo (the absurdly likable Randall Park's character from ANT-MAN & THE WASP) who says he's checking on someone in WITSEC but their known associates claim to have never heard of them and the town they're meeting outside of doesn't seem to exist. Monica fires up a S.W.O.R.D. drone and flies it toward the town where it disappears past a forcefield. She approaches the field and is herself pulled into it.

From this point every conceivable intelligence and response agency converges on the anomaly. Experts from all fields are brought into to stare and think, and we get another returning character in Darcy Lewis (Kat Dennings, CHARLIE BARTLETT), the intern of Professor Selvig and Jane Foster from the first two THOR films. She finds unsual levels of Cosmic Background Radiation along with a higher, stronger wavelength. She tunes into that secondary wavelength and discovers WandaVision. 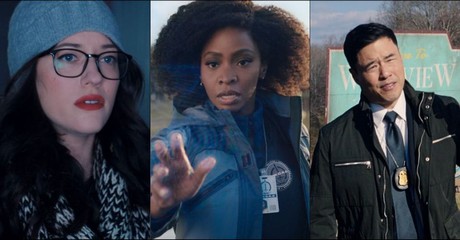 Now, in probably the most charming meta-moment from the entire Marvel Cinematic Universe, the characters within that reality start to ask the questions that we, its loyal viewers, have been asking ourselves: What are we seeing? Why is this happening? Who is in control? In true cinematic fashion they break out a whiteboard and start jotting their questions, our questions, down: Why is it a sitcom? What is the significance of the hexagonal shape? Why is Monica playing a character? Who are the supporting cast, and what is their purpose?

They begin to put names to the faces on the screen, and eventually become invested in the narrative developing. They try to communicate through the radio singals (that was Woo calling out in episode two) and observe the censoring jumps in editing when the show could possibly go off the rails or lose its facade. They even see the Hydra watch ad, which no one seems to respond to. Curious. It is revealed that S.W.O.R.D. also sent in "The Beekeeper" whose fate is left ambigious.

As the viewer, we are given slightly more omniscience than the characters onscreen, and we see the conclusion of Wanda's conversation with "Geraldine" which has the latter cast out of the idyllic town of Westview and Wanda repairing the damage in her dramatic exit. Then Vision returns from chatting with the neighbors and we're given Wanda's view of him without the benefit of her sunshiny trance: 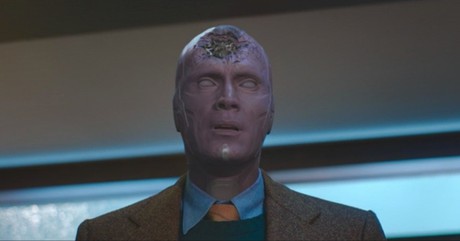 It's becomiing apparent that the title of the show, WandaVision, isn't a combination of the names of its leads but rather an explanation of what we are seeing: Wanda's vision. This idyllic world is the work of Wanda, as Rambeau mutters as she comes to outside the field: "Wanda. It's all Wanda."

And it makes perfect sense. Wanda had always been a little troubled, through her war-torn upbringing, the experiments of Baron Von Strucker, her allegiance with Ultron, and the events of CIVIL WAR, INFINITY WAR, and ENDGAME. Whereas Banner's snap brought back everyone's loved ones from the Blip, Wanda reclaimed nothing. Her loves weren't banished out of existence by a despot, a wave of a wand that could be reversed. Her brother Pietro and her lover Vision are dead, and she's probably suffered a complete psychotic break. The only way to bring them back is through memory, a memory that she has the power to manifest at will. Which begs the question, If this world is all of her creation, where is Pietro?

Furthermore, who are the supporting cast, and why are they there? Are they serving Wanda, or, like the commercial breaks imply, is her broadcast susceptible to outside interference? Is Vision a manifestation or is he actually an animated corpse? How real are the twins, if at all? And what are we to make of Vision's occasional doubts, concerned glances, and questions? If he's imagined, how is he able to resist those who've imagined him?

We know now that this is set in the "modern" Marvel Cinematic Universe; that is, after both the Snap and the subsequent Snaps and death of Iron Man, retirement of Steve Rogers, etc. This means the Infinity Stones are still in play... or are they? Cap went to the past to return all the stones to the moment that the perpetrators of the Time Heist took them so that they could continue to affect the timeline that brought them all to Thanos in INFINITY WAR. ENDGAME opens with Thanos destroying the stones. That timeline moves forward to retrieving them and bringing everyone back, fighting Thanos again, and using them to wipe him and his army out. Then they're returned so everything can remain as destined. In that case, the stones are "currently" destroyed. With this in mind, I can't follow my first hunch that a version of Vision's consciousness exists within the Mind Stone. So where is his personality, the part of it that balks at the improbability of his life with Wanda, coming from?

Aahhh, so many questions!! And so exhilarating! This episode truly kicked this show into high gear, and that promo that I posted above makes it look as though Vision, or whatever is standing in his stead, is set to take action against Wanda to bring this illusion down. I am so pleased to see the universe widen with the inclusion of Woo and Lewis and Rambeau and S.W.O.R.D. and can't wait to unravel the mysteries of the town, its people, and the fate of Wanda and her twins.

There are five episodes left of this season of WandaVision to enthrall us all, each airing Fridays at midnight on Disney+. Chime in and let me know what you think about these developments are where the show is going.