Howdy, y'all! McEric here with a review of the reboot/make/launch of WRONG TURN, brought to us by the screenwriter of the original 2003 film, Alan McElroy, and director Mike P. Nelson (THE DOMESTICS). Check out the trailer:

The press release states: "Backwoods terror and never-jangling suspense meet when Jen (Charlotte Vega) and a group of friends set out to hike the Appalachian Trail. Despite warnings to stick to the trail, the hikers stray off course—and cross into land inhabited by The Foundation, a hidden community of mountain dwellers who use deadly means to protect their way of life. Suddenly under siege, Jen and her friends seem headed to the point of no return— unless Jen’s father (Golden Globe® nominee Matthew Modine) can reach them in time." Upon reading that I had two immediate thoughts. One, that typo back there was actually a Freudian slip revealing their admission that this film really would have "Never-jangling suspense". Two, Modine is going to be sidelined as an exposition device and all his screen time will be phone calls and yelling "Where is my daughter??" at extras.

I was happily wrong on both accounts.

WRONG TURN is good! Filled with taut tension, grisly deaths, menacing terror, and enough psychological abuse to satisfy your Aronofsky itch, it fires on all cylinders. Sporting a far more diverse cast than 2003's beige ensemble of late 90s heartthrobs and poster girls, it makes use of its Virginia-setting to timely benefit. The "You're not from around here" motif is used heavily throughout the film and it doesn't feel quite false. Though the leads do lean into their broad archetypes far more than is cinematically plausible, it's still nice to see them as a group.

As the film started out with some beautiful nature photography I thought to myself "You know, horror fanatics are a largely sedentary group" and I think I see why. We've been watching people go for a swim and get eaten by a shark, or go for a hike and get kidnapped by mountain cannibals, or go camping and get a machete through their titty, or go to Mars and get possessed by a Ghost and scar their bodies and mutilate their friends. You get the idea. No wonder we don't get out much. The Appalachian Trail, however, is beautifully rendered in this film, with Ohio standing in for Virginia.

Our heroine Jen, played by Charlotte Vega (Netflix's "Warrior Nun"), is fairly capable and likeable, and her transformation throughout the film is what I believe sets this film apart from its contemporaries. It's more I SPIT ON YOUR GRAVE than DISTURBING BEHAVIOR, and I like that just fine. Don't get me wrong: late 90s/early 2000s horror has its gems, but they're largely tongue-in-cheek MTV episodes light on gore and character arcs and heavy on mood and bombastic music cues. Almost twenty years on, McElroy has leapt over that pit of spikes.

Speaking of pits of spikes, damn is this film brutal as hell at times! It's like MIDSOMMAR in North America. Though the leads don't reveal much about themselves it still hurts a little to watch them die, and we cheer on those who might make it through. The "villains" have their reasons, and very few are likely to agree with them, but horror fans celebrate how they go about their business.

Without spoiling the film, I will tell you that the film has three endings (after you think its over) and all of them are SATISFYING as heck. Do not stop watching until you know there were no animals harmed and where the filmmakers rented their cameras. Seriously. You won't regret it. 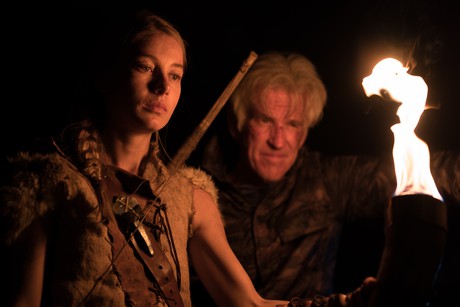 I give WRONG TURN four out of five throwing knives. Let me know what you all think.

Until next time, stay safe out there and DON'T VEER OFF THE TRAIL!!!!