Howdy, y’all! McEric here with the latest Nic Cage (MANDY) movie for you, and this week it’s a thriller called PRIMAL. Check out the trailer here:

The film came with this synopsis: When Frank Walsh (Nicolas Cage), a hunter and collector of rare and exotic animals, bags a priceless white jaguar for a zoo, he figures it’ll be smooth sailing to a big payday. But the ship bearing Frank’s precious cargo has two predators caged in its hold: the cat, and a political assassin being extradited to the U.S. After the assassin breaks free – and then frees the jaguar – Frank feverishly stalks the ship’s cramped corridors in hot pursuit of his prey, right up until the thrilling, unpredictable climax.

I read this synopsis out loud to friends of mine several times, and not once did I not break out into laughter while doing so. It seems a bit ridiculous, but perhaps not any more so than CON-AIR or JUMANJI, of which this film finds itself becoming an odd offspring. Maybe a reverse UNDER SIEGE. To be honest, everything seems derivative of something else, but these comparisons are blatantly apt with this feature. Several times throughout the viewing I referred to the film as “Bad Jumanji.” 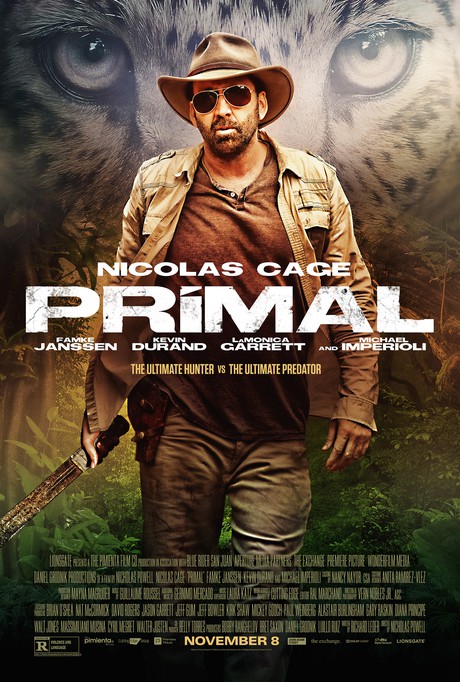 Which is not to say that the movie is bad. It’s quite enjoyable for its 97-minute run, and Cage turns in typical solid work. The dude makes a lot of flicks but he almost always dials in a pretty solid commitment, and that is on display here. What is most interesting about Frank Walsh is that he’s a shit protagonist. With a film that opens with him “bagging” a priceless white jaguar, and then finding that bounty in jeopardy, you’d think Walsh is ripe for a “Save the Cat” moment to sell his heroism, but rather he angrily swats away any opportunity to be the good guy throughout the film. He’s given some semblance of a redemption arc but it’s actually quite self-satisfying and underwhelming in light of his many malfeasances.

Michael Imperioli (BAD BOYS) and Famke Janssen (HANSEL & GRETEL: WITCH HUNTERS) are totally in this movie. Totally. They say stuff and move around. Lamonica Garrett (CW’s “Crisis on Infinite Earths” crossover event) is given much more to do, and does so quite well. As the resident authority figure, he is both commanding and demanding, teetering a line between respect and spite. His militance is a good foil for Walsh’s nihilistic simplicity. 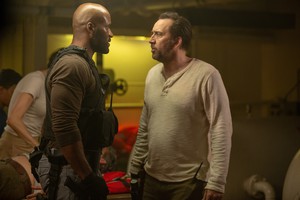 The person having the most fun with this whole project is Kevin Durand (SMOKIN’ ACES) as the film’s true villain, Loffler. (Or, in our CON-AIR comparison, Cyrus the Virus.) Indeed, Durand seems to be doing a Malkovich impression for quite a bit of the film, but mostly his Loffler is just smiling and killing people. He’s given a vaguely sympathetic backstory about military and the grey area of Soldiers of Fortune but it’s washed over so quickly that the viewer gives very few shits about it while waiting for the killing to resume.

Perhaps the most problematic aspect of the film is the way that Walsh’s menagerie is presented. The white jaguar is conveyed as a man-eating killing machine, despite repeated assurances from the onscreen characters that jaguars don’t eat people. Also in tow are monkeys that tear people’s faces off, poisonous snakes, and expendable birds. The film vilifies the animals in a way that seems to justify Walsh’s poaching and, in a larger sense, all animal abuse. It’s an unhealthy message that ultimately seems gratuitous. 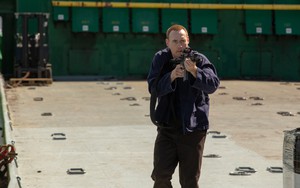 The film we receive in PRIMAL is frankly more bloated than it needs to be. The animals, even the jaguar itself, are quite superfluous. As mentioned, Janssen and Imperioli’s characters do next to nothing. The film worth watching here is Walsh v Loffler, and what happens around them is tertiary at best. Cage and Durand seem to be having genuine fun in their respective roles, allowing the viewer to enjoy the ride appropriately. If you like CON-AIR or UNDER SIEGE and don’t think they needed any elements of JUMANJI added, then you may find yourself enjoying PRIMAL.

PRIMAL is in limited theatrical run currently, and is available On Demand from all major online retailers.