MARVEL returns to the Big Screen with BLACK WIDOW!

Hey y’all! McEric here fresh off seeing MARVEL’s BLACK WIDOW and I felt compelled to give you my spoiler-free review of the return of the mega-franchise to theaters after a seemingly interminable wait. In case you’ve been living under a rock, here’s a preview for the film:

Now as a “film critic” this is where I’m supposed to tell you that I don’t particularly care for the Marvel Cinematic Universe; like I get why some people can get into it but it’s not for me. I prefer the realism of auteurs exploring the human condition and using cinema to answer Man’s  Timeless Questions of Self.

But that’s bullshit, and I don’t subscribe to that pretense. I fucking love the Marvel Cinematic Universe. I don’t necessarily worship at the altar of Stan Lee, but I do look forward to these event films as welcome distractions from the desaturated tones of my rather pedestrian life. Do I think all of them are cinematic masterpieces? No. No one is ever 100% right all of the time, and Kevin Feige, uber-producer extraordinaire, is no exception. But when Marvel does hit the bullseye, they hit it dead on, and there are many of the films that I can watch ad nauseum while never getting nauseous.

One such example is CAPTAIN AMERICA: THE WINTER SOLDIER. After several spectacular films of larger-than-life heroes and villains in unbelievable superpowered brawls, CA:TWS was an espionage film in the middle of the MCU. It showcased intense action sequences and a fairly intelligent script, featuring the screenwriters and directors that would later go on to give us CIVIL WAR and the third and fourth AVENGERS films. It didn’t need monsters or aliens or gods to astound; it was just a damn good spy thriller.

As the universe expanded, I somehow lost sight of that, and actually went into BLACK WIDOW worried that the humanoid exploits of Natasha Romanoff may disappoint me. That, like some Narcissus of cinema, I had seen wonders that would make the human condition seem insignificant. What I forgot was the essential magic of cinema: the ability to see worlds outside our own. So, yeah, maybe Natasha doesn’t turn into a giant green rage monster or tear the heads off fire demons, but she does some pretty amazing shit that I doubt I’ll ever see done with my own eyes in my little world. And as such, I’ll happily pay the price to see it in IMAX.

To compare BLACK WIDOW to the second CAPTAIN AMERICA film is an apt mirror: while the technology onscreen vastly surpasses what we have currently (at least I hope so), it’s largely a guns-n-fists kind of action film. The large themes are family, nationalism, free will, and redemption, and I admit at some times the humor seemed to step on the more poignant possibilities of the film, but for the most part this stands out as one of the more grounded Marvel films.

Scarlett Johannson is great, period. That’s no feat; she often is. I’ve been a fan ever since GHOST WORLD and more often than not she turns in stellar work. Her turn in JOJO RABBIT is one of the most impressive performances I’ve seen in recent years and I will happily bend anyone’s ear for longer than is comfortable to explain why. As great as she is, though, she is hopelessly outcharmed in this film by Florence Pugh (MIDSOMMAR) as Yelena Belova, Natasha’s “sister.” Yelena’s uncomplicated heart sees the hard truths, asks the hard questions, and dissects the hero trope while still remaining affably funny and endearing. Natasha has been given a few chuckle-worthy clips in the MCU so far that intimate a candor and innocence beneath the conditioning, but Yelena is the living embodiment of that latent girl. She is a terrifyingly efficient killer and a brutal fighter, but as she casts off her old life throughout the film’s run, we find a vulnerable child beneath the killer’s mask. 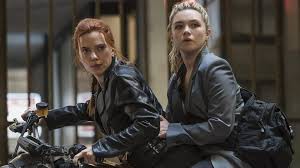 I wasn’t originally intending to write about this film; big tentpole films aren’t really my M.O. I came home from the movie and played Toon Blast on my phone and checked my social media feeds, which is when I saw that someone tweeted an affirmation that WONDER WOMAN was still the “greatest female superhero film ever.” I thought about that for a second and while I haven’t decided if I agree or not, I know the first line of reasoning that made me doubt the veracity of the statement: BLACK WIDOW has zero in the way of a love-interest story. She doesn’t need a “Steve Trevor” to make her relatable, and I think the genius of it is that she’s not intended to be relatable. We are not meant to be able to rationalize or empathize with what Natasha Romanoff has experienced; it’s too far beyond us.

Director Cate Shortland has a superb eye for action, and the combat sequences are incredibly intense. I realized during the big “Widow Fight” from the trailer that I was pressing my body into my seat to distance myself from the viscera. It’s beautifully well done. While this film does fill in some relatively trivial gaps in the grander MCU, it serves as a superb solo vehicle for expanding the lore of the Black Widow. As it is set within the existing timeline, the terminus of which we’ve already seen, we don’t feel any real sense of peril for Natasha, but the extended characters are wildcards; anything can happen. Rachel Weisz (THE SHAPE OF THINGS, THE MUMMY franchise) and David Harbour (Netflix’s “STRANGER THINGS”, HELLBOY) shine as the “parents” and I really enjoyed O-T Fagbenle (Hulu’s “THE HANDMAID’S TALE”) as Mason, Natasha’s beleaguered friend and occasional arms dealer. Ray Winstone (SEXY BEAST, THE DEPARTED) chews the scenery as the film’s main protagonist, but it’s Taskmaster who brings the real challenge to our heroes. As the Marvel Universe’s greatest mimic, the viewer gets to see some familiar fight choreography that will ensure that your obsessed friend will beat the shit out of your arm when the moves hit the screen. (At least, that was my experience.) 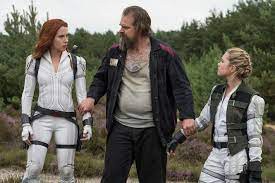 Oh, and stick around after the credits. Duh.

Of course, the greatest joy of seeing BLACK WIDOW on the big screen lies in SEEING BLACK WIDOW ON THE BIG SCREEN! It was wonderful to see a big banner title on an IMAX screen with the popcorn and the soda and the previews and the earth-shattering sound, and if you love going to the movies for the spectacle you can certainly do worse than a Marvel film.

MARVEL’S BLACK WIDOW is playing in theaters now, and can also be viewed on Disney Plus as a “Premiere Access” title for an additional $29.99.