Hey, friends!  Barbarella here.  While many industry experts advise avoiding any project that requires filming on the water, Australian director Martin Wilson didn’t get the memo.  Instead, for his feature-film debut, he opted to make GREAT WHITE, a film about a group of tourists that find themselves adrift on the ocean with predatory sharks lurking underneath.  I spoke with the Australian about the film and the shoot. 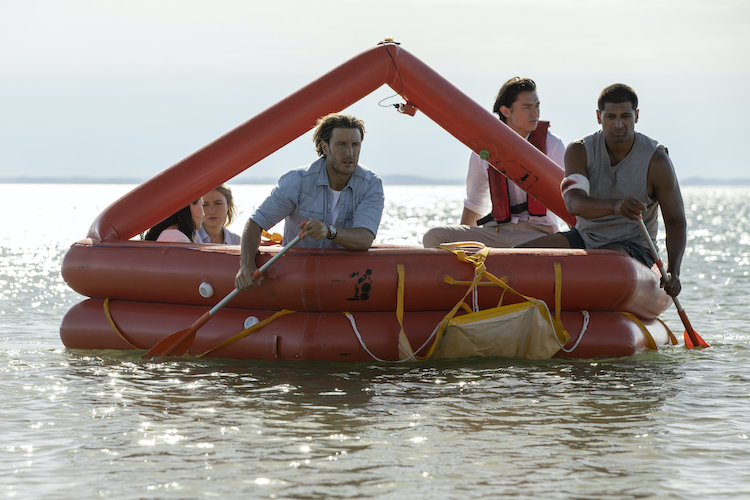 What do you have against Great White Sharks?

“I don't have anything against sharks at all.  We tried actually to give the sharks like a motivation for their behavior in the movie, so there's some lines of dialogue in there which allude to the sharks taking revenge on all these humans because their habitats have been affected by what we are doing as humans to the ocean and the environment.  I just didn't want the garden-variety monster just doing that for no reason.”

I thought your sharks looked pretty good, better than most lower budget films, so would you talk a little bit about working with your effects team to achieve the right look, and how did you decide how much screen time to give the sharks?

“It was a combination of CG shark and an animatronic shark called Brenda, like Bruce from JAWS.  We had some use of some stock footage.  I guess we're just trying to blend it, make it work for the story and the suspense.  [Regarding] the amount of shark that you see, we were trying to put a lot of that into the audience's imagination and use it in sort of specific ways and at specific times within the edit.

“The film was more about the horrors and the tension above water between the characters.   With the effects, I guess we were working with those short bursts of shark that you can't get with stock footage.  You have to have those moments where the shark is purely interacting with the actors where we had to go with some of the CGI shots that we did.”

What happened to Brenda?

“I think Brenda is just taking a chill pill and hanging out in some warehouse somewhere, like the lost ark of the covenant.”

I spoke with Aaron Jakubenko recently, and he told me about the plane sinking.  How long did it take you to realize that that was happening, and what was going through your mind at the time? 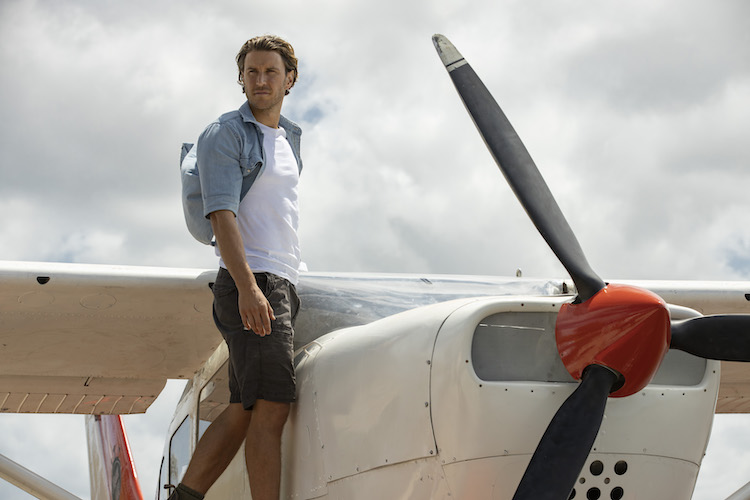 “I was probably thinking, “Why aren't we shooting this?”  (Laughing)  It happened so fast, like a lot of these things.  Everyone’s there and everyone's safe.  In a blink of an eye, suddenly the water was weighing down the plane, which was causing it to sink and yeah, the actors were jumping off that plane pretty quick.  It was very shallow water; still you obviously don't want that stuff to happen.”

You didn't get any of that on film?

“Nah, because it was in between setting up.  If you're a really low-budget movie, your camera's rolling all the time, but this type of movie, you got two cameras going.  You got a big crew there, so you have to go through certain protocols before you're rolling, so we weren't rolling.  It was funny.”

I've often heard making a movie that takes place on the water is something to be avoided at all costs. How did you find the experience? Was it as bad or as expensive as they say?

“Well, it's certainly an experience.  I hadn't done that before so I went in with a fair portion of naivete.  That's probably a good thing.  What you don't know won't hurt you.  I guess shooting on water is everything they say, because everything about shooting on water is about what you're doing on the environment.  The environment is the wind, the tides, the little stingers in the water; none of that you can control.  If the wind gets too crazy or the tide's just sucking you further out, then you have to stop shooting.  It's a real time-management thing, and then you lose two hours here, and how are you going to make it up the next day? 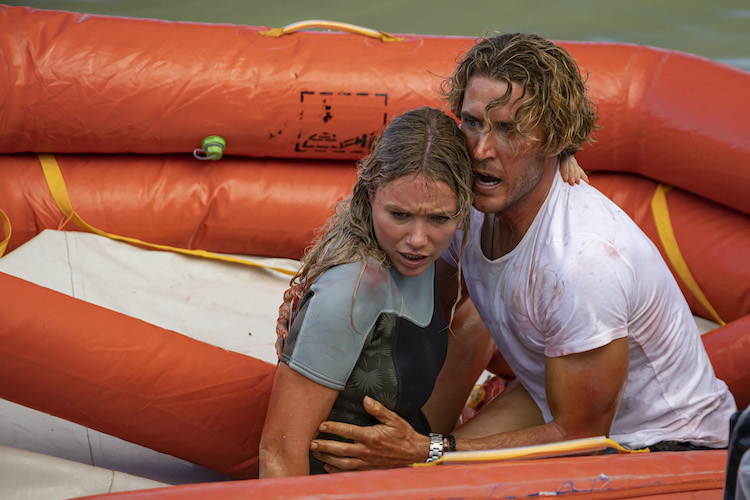 “It is really tough in the environment.  Plus, in Australia, when we were shooting, it was really hot and energy-sapping.  You have all those other elements, as well.  Then, when you're shooting in a tank, around the water, there's a whole new ballgame where you're dealing with really claustrophobic environments, where the actors are trying to move around, and it's really scary for them.  They've got to hold their breath, and that's a whole other skill set.  Communication is a lot more difficult.  There are so many elements to do with water that are extremely time-consuming.  If you want to change your lens, you'd have to bring a camera up, and you have to take off the housing and put another lens on it.  We only had twenty-five days to shoot this action/adventure movie on the water, which is just really hard.  Really, really demanding.”

Wow. And this is your debut feature film?

“Yeah, this is my first movie so it's an adventure to do a full-on action/adventure on the water.”

Was it everything you dreamed it would be, and how did it differ from your expectations?

“Well, I think it's definitely an amazing experience to go through, working on such a high-energy, high-demand type of project.  I've been shooting shorts and TV commercials for twenty-odd years, so you just have to draw on all that experience when you're really put into that pressure cooker.  When I look back at it, I'm just so grateful that I had the chance and the opportunity to make something which is really getting a lot of attention in America and getting lots of good responses.  You look back and go, “Thank God I had that chance.””

The location is gorgeous. Would you discuss your experience filming and just being there? 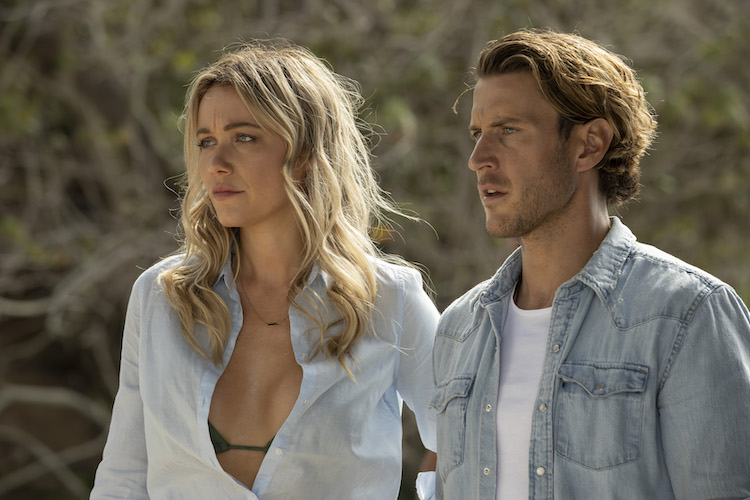 “One of the things I wanted to do with the movie was to really showcase a location that hasn't been seen in a shark type of film before, which is sort of a really Northern tropical location in Australia, and to showcase the beauty of those locations and how sumptuous and gorgeous they are, and use that to juxtapose to the dangers that sort of lurk underneath, all the primal dangers.  It's kind of like, it's so inviting and beautiful to go for a dip or swim, but you don't know what's under there.  We were trying to really give this expansive, vast, beautiful location and contrast it to the dangers within it.  That was our approach, to show these tiny, vulnerable life rafts, which were sinking in this huge expanse of beautiful water off Australian's northern coast.  It was really trying to use all the ironies involved in that type of look and feel of the movie.

“I wanted people [who] were sitting at home or in some freezing-cold other part of the world and suddenly [they] could be transported away to this very exotic, beautiful landscape. That was kind of what we were trying to do, as well.”

I think that succeeded.  Just watching it really made me want to go back to Australia. 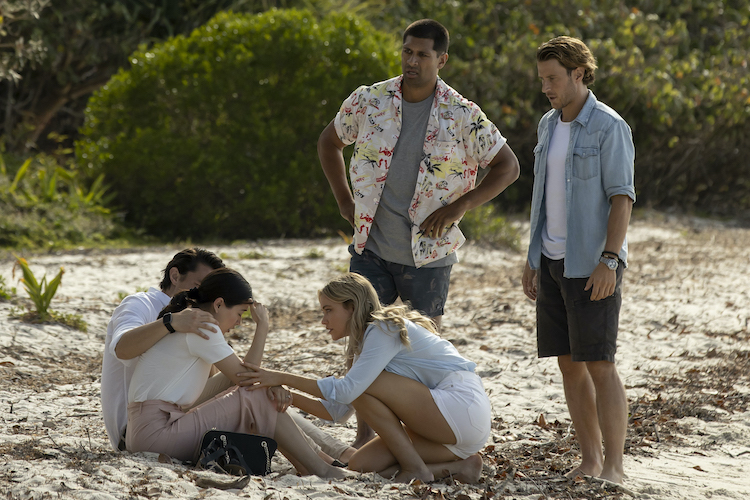 What scene required the most preparation, and what had to be done?

“I think one of the most complex and detailed scenes for preparation would have been when the plane sank because you've got a plane, a big prop, sinking, actors getting wet.  To do retakes and stuff, you've got to be on top of the continuity of how wet were they in that last scene and how low or high did the water get?  It’s complex in terms of stunts and the danger levels of all of that.  I'd say that plane-sinking scene was very complex to achieve."

Did you do any kind of swim training or water training with the actors?

“There was a little bit of diving training at the start.  Aaron Jakubenko, who played Charlie, had done a lot of underwater training and swimming for his previous TV show, TIDELANDS.  That was such a benefit to us because he became a bit of a leader for the other actors.  On weekends, he would be teaching them at the hotel pool about techniques to hold your breath and all that sort of stuff.  He was just an amazing asset in terms of the swimming elements and the stunt elements.  The other guys were really good swimmers, and Katrina Bowden was an amazing asset as well because she really took the whole concept of the film to heart.  She was really fearless, so that was really awesome.” 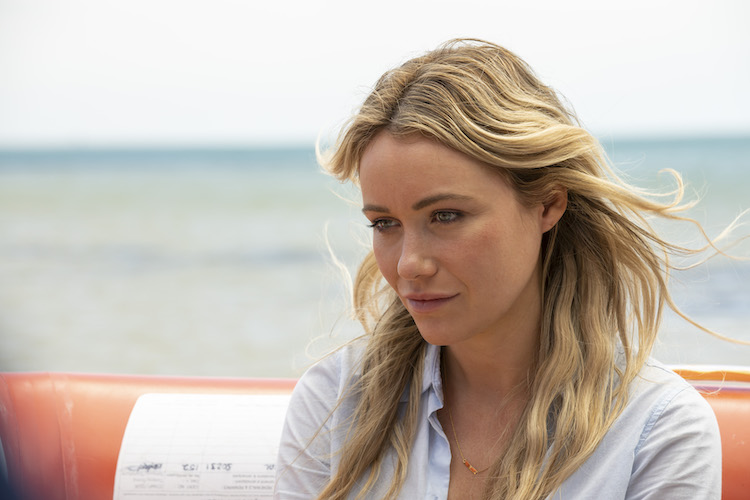 What would be the title of your memoir?

“It's a pretty vibrant scene.  There's a lot of really good, talented filmmakers here.  A couple have come back from Los Angeles during the COVID.  We're building quite a cache of talented artists and directors and producers and writers.  They're just commissioning a hundred-million-dollar film studio, which will be constructed in Fremantle, which is exciting.  It's quite a big studio where you can attract your Marvel-type production, so that should help stimulate the industry further.  It's a really promising time in Western Australia at the moment, an exciting time.”

After speaking with Martin, I feel a little bad for Brenda being stuck in a warehouse in Australia when I could have so much fun letting her loose in Barton Springs Pool in Austin and watching the swimmers react.  Heh-heh.

If you’re interested in seeing Australia's beauty in Martin’s first feature, GREAT WHITE is available now On Demand and Digital.