Hey, friends. Barbarella here. After having drank a few too many tequila shots at a weekend memorial we held for a dear friend we lost this year, I mustered the energy to get on a call with Linus Roache, who’s in a film called The Apology with Anna Gunn. 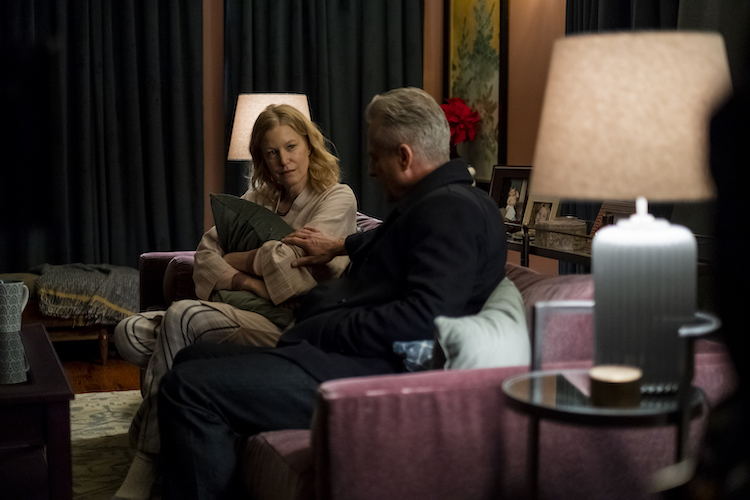 In The Apology, Linus Roache plays recovering alcoholic Darlene’s former brother-in-law, Jack, who shows up unannounced on Christmas Eve to share a secret twenty years after her daughter goes missing. While I generally try to avoid spoilers in all my posts, even interviews, I can’t get around it here. Through reading this, you’ll know the secret, if you don’t already. If we’re being honest, though, you probably already know it, because the film’s very title and the briefest synopsis give that away. Still, I’m including the spoiler flag to warn of some discussion that kind of delves into the character of Jack a bit, but I think the film offers enough additional intriguing themes about people and their relationships with each other that knowing part of the story doesn’t ruin it for you. Okay, enough of my disclaimer. Check out our conversation.

I love movies, obviously, and I’m very fond of independent films. Part of that is because I love how they explore the world from different points of view, and I think that forces me to see different perspectives, and it’s made me more empathetic. I’m wondering, as an actor, especially one like you, who’s played such a wide array of very different roles, if that experience has made you view humanity any differently or given you more empathy or understanding towards characters and people that perhaps most would write off as evil or monsters?

“Yes, definitely, without doubt. I think, part of what I wanted to do as an actor is explore humanity, and that’s what has driven me to take on as many varied roles as I have. Sometimes maybe I’m a little too ambitious, and I’ll say “I’ll have a go at that” even when I probably shouldn’t. I’m fascinated by it. Can I reach it? Can I understand it? Can I relate to it? Can I humanize it? The piece we’re talking about now was very much a case in point.” 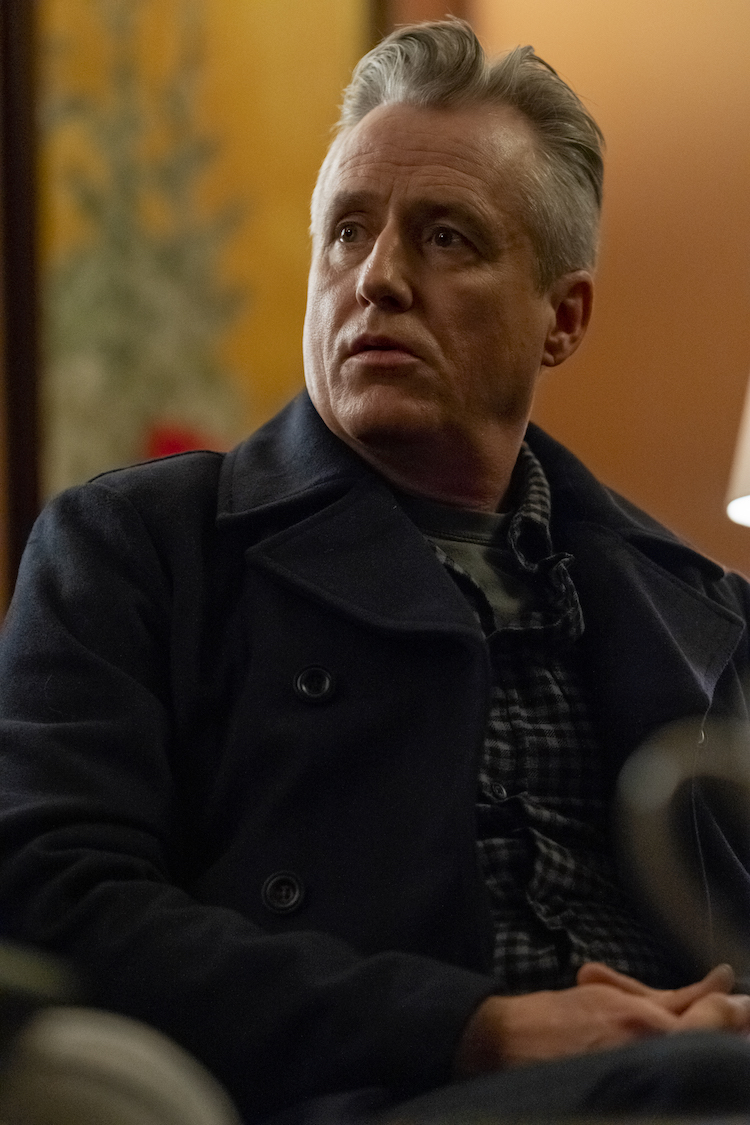 How was transforming into Jack for you?

“First of all, Ally Star Locke, who wrote the film, wrote such a strong piece, such a strong character. She had a very clear theme of what does it take to get someone to be accountable and take responsibility for their actions. In the beginning of my process, I was focusing quite a lot on what he did and how he could’ve lived with it and coped with it, and what his life had been like for the nineteen years before he knocks on Darlene‘s door on Christmas Eve. Then at a certain point, it really became a switch-around to just go, “What’s his foundational driving force?” It’s that of his self-image, which is “I’m not a bad man, and it was a mistake,” and so he’s pathologically addicted to that idea, and that’s what gave me, I think, the foundation and the anchor from which I could play the role. My wife actually helped me find that. We talked about it a lot, and I think that’s when it sort of came together for me. That was my rudder throughout the story.”

Interesting. Where do you stand on forgiveness? Do you think there are unforgivable acts, or do you think anything could be forgiven?

“Well, I’m going to quote Ally on this when she said, “Accountability and compassion are not mutually exclusive,” so yes, I suppose the answer must be if someone can truly take responsibility, then we’d have to have some compassion. But, that’s a difficult, thorny thing. Does somebody take full responsibility? How often, even in small cases, do we take full responsibility for our own mistakes? How often have you seen someone else do something, and they just won’t admit that they did it? It’s a weird, complex thing, this image that we have. We don’t want to be wrong, so to truly acknowledge and bear the weight of responsibility, I think it’s a very, very tall order to ask for any human being, and that’s why I think it’s very interesting when you see this movie, and you see Jack. I think the audience has to decide for themselves whether he does or not.”

What did you love most about working with Anna Gunn? 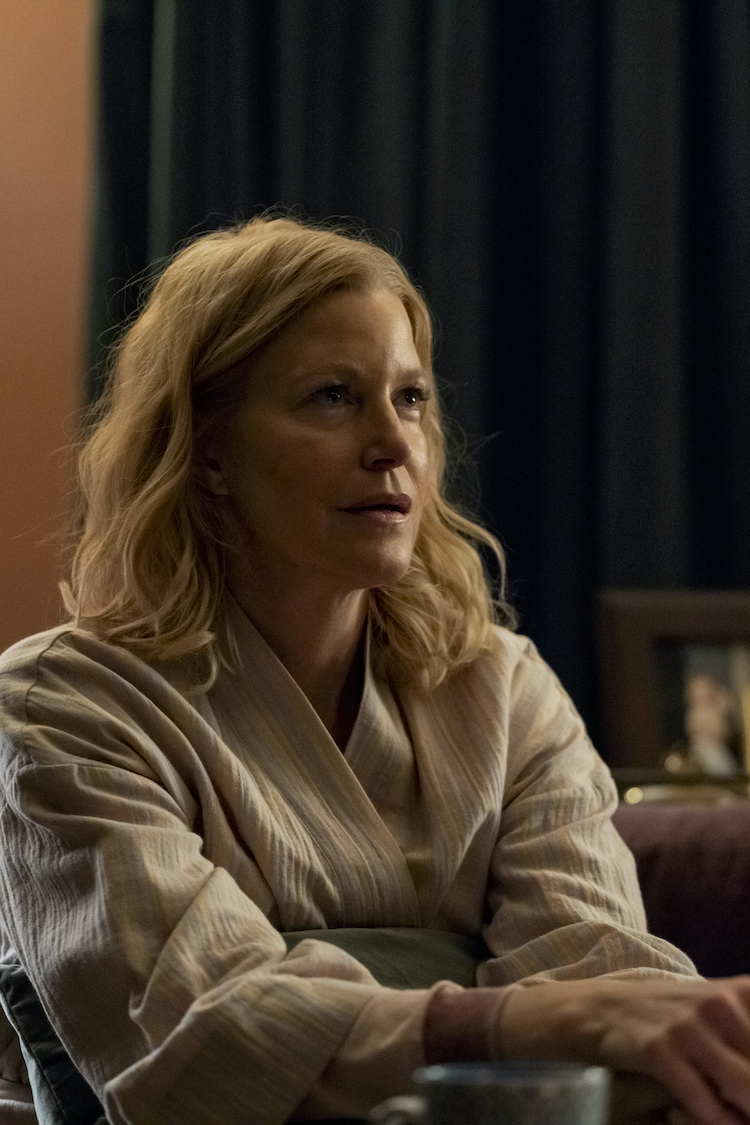 “Anna and I had actually worked briefly many, many years ago on Law and Order, so we were aware of each other and had met then, and we had quite a good process with Ally over Zoom. We did a lot of Zoom rehearsals, just talking through the piece and making sure we understood where each character was coming from and sharing stories. Interestingly enough, when it came to shooting it, we just went into this mode of we’re just doing it on camera, we’re just bringing everything to when the camera’s rolling, and we’re not talking about it. It was great because I think sometimes you kill something by overthinking it, over-talking it, over-scrutinizing it; you actually take the heat out of it. It was a fascinating process in the end, and I think it was the right way to do it. It just almost happened by accident. It was very quick. We went in, and there was a great chemistry there. It was very immediate, and unless something was really off, we would commit and walk away, and that was powerful.”

You took a break from acting for a bit. Why did you take that break, and what brought you back into it?

“That’s a long time ago, but I think I was very lucky, and I’d achieved a lot of things I wanted to achieve, and I was just hitting the age of thirty and going, “Well, what am I really doing? Am I just [going to] keep doing this for the rest of my life? Why am I here?” I started asking big questions, and it’s dangerous to ask big questions, because sometimes it just undermines everything. I got very interested in meditation and spiritual life, and I sort of took off for a while, went to India for a bit, and I sort of stepped back. I felt like I was a little too caught up in the industry. You know what I mean? I just felt like my identity was too concerned with whether I was working and what I’d done and what I was gonna do next, all that stuff, which never goes away really, but I suppose the time away made me just go, “Oh okay, it’s just a job like anything, and you don’t have to have a neurotic relationship with it.” I came back renewed, and the first job I did when I came back, I was a little bit cautious. I didn’t commit to it properly, and I learned from that, and since that point on, anything I’ve done, I’m 100% there, no matter what it is. If it’s a student film, if it’s a voiceover, it doesn’t matter. My commitment is 100% to what I’m doing.”

A lot of people feel like they need a routine to kind of keep themselves normal and sane. As an actor whose schedule is essentially at the mercy of whatever production you’re involved with at the time, how do you maintain that sense of normalcy and sanity in your life?

“Well, after Covid who’s sane? I don’t know anymore. I’ve done various things. I do meditate a little bit. I try to stay connected to people. I mean, I’m lucky. I’m doing the thing I love doing, being creative. That actually fulfills me. My wife and I have a project we’re developing. We’re trying to set up a movie that we have written, and that keeps me busy. Straight after Christmas, we’re on a plane to India to go do an Ayurvedic cleanse for three weeks. After getting Covid a couple of months ago, we felt so bad after it, and I’ve always wanted to do this. It’s a three-week complete detox so that’s what we’re gonna do. That’s just a few of the things I do to try to stay sane, but I don’t know if I am sane.”

Who is really sane though? What is sanity?  How many jobs have you gotten over drinks?

“I don’t think I ever got a job from having a drink. I do often find that work begets work and relationships beget more work. My Policeman is a movie I did this year. My relationship with Ron Nyswaner, who wrote that, started on Homeland. I did a whole season where he was one of the writers on that, and I subsequently had just finished on his series called Fellow Travelers, and he wrote a piece for me, so I think, sometimes you build these friendships and relationships where people get you, and they get what you want you to be doing.

“Ally wrote to me about The Apology. It was the most beautiful letter; I should’ve kept it. It was clearly somebody who knew my work and just wanted me for the role, and I was so flattered. It doesn’t happen that often. Normally, I am the sixth person in line. After so many people have turned it down, I’m the one that might get that offer, so it’s lovely to be actually sought out for something. It’s a mysterious thing how work comes. It really is. I’ve had periods where nothing’s happening. I can’t even get arrested, and then out of the blue, two amazing jobs will just appear.”

What do you prefer: the larger budget films or the independent films?

“I like both for different reasons. Obviously, I get paid better on the big-budget films, but I like the creativity on the low budget. It is fantastic, but only if it’s got enough budget to execute the thing you’re doing. This film is a good example. It’s a great production company. Kim Sherman and Stacy Jorgenson, they’re great people, and they know what they’re doing. They got the right budget for the movie, you know? Even then, could we have done with some more money and shot a bit more? Yes, we could have. I think there’s a sweet spot, when people get it right. It’s the right amount of money for the right story, and that’s great, but yeah, big budget is nice, too. I love seeing all the bells and whistles that go on with that.”

You can explore the concepts of contrition, forgiveness, revenge, and friendship in Alison Star Locke’s The Apology, starring Linus Roache, Anna Gunn, and Janeane Garofalo. The film will be available this Friday, December 16 in theaters, on Shudder, and on AMC+. Here’s the trailer. Check it out!