Howdy all! 'Tis the season for all things joyous and full of child-like glee, and Disney+ has given us our first gift of the year! The LEGO Star Wars Holiday Special hit the streaming service Tuesday, November 17th, and it is 100% pure brightly colored Fan Service...

And I love it! Here's the trailer:

To truly dissect the LEGO Star Wars Holiday Special requires us to look at several factors that led to this moment. Of course, there is the original Star Wars Holiday Special from 1978, which is unanimously agreed to be a tone-def cash grab of disastrous proportions. Then there is the emergence of LEGO as a property that is so universally loved that it has been granted use of practically every piece of intellectual property from the past seventy years. Seriously, look at their catalog! They've got DC, Marvel, Harry Potter, Star Wars; hell, you can even build your own LEGO Nintendo! The chief reason that LEGO is extended such licensing opportunities is their track record of handling these properties with respect and levity. THE LEGO BATMAN MOIVE was one of the biggest surprise hits of 2017, not to mention THE LEGO MOVIE and its sequel; even the LEGO NINJAGO MOVIE was fun.

LEGO has been producing Star Wars shorts for quite some time, and it is with a sigh of relief that I learned they were making a brand new Holiday Special. Please, oh please, let something come along to wash out the memory of the original! The synopsis for the LEGO entry reads as:

"As her friends prep for a Life Day Holiday celebration, Rey journeys with BB-8 on a quest to gain a deeper knowledge of the Force at a mysterious Jedi Temple. There, she embarks on a cross-timeline adventure through beloved moments in Star Wars history, coming into contact with iconic heroes and villains from all eras of the saga. But will she make it back in time for the Life Day feast?"

If you're reading that and thinking to yourself "Who did they make this for?" the answer is "ME!" Did I love every moment of it? No. Honestly, the actual frame story is flimsy and weak. but that's not what makes you tune in, is it? It's the moments from throughout the saga. It's two Hans both shooting first at a perplexed Greedo. It's an unassuming young Luke Skywalker who just wants to drink blue milk and stare at the suns. It's Emperor Palpatine and his giddy delight at being evil, a la his Robot Chicken counterpart. 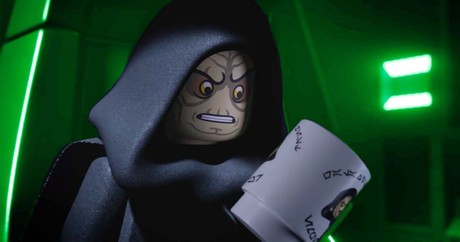 The special begins much as the 42-year-old version, with Chewbacca looking forward to seeing his family for a Life Day Celebration. While Poe and Rose are focused on preparing the Millennium Falcon to receive their guests (it's a ship; I don't see why they couldn't just go around and pick everyone up), Rey is intent on teaching Finn how to use the Force sensitivity he displayed in the third trilogy. She keeps hitting a wall in the training and retreats to meditate, where she learns of the temple that makes itself visible on this one day. She tells her friends she has to go, which they all lament as Life Day is meant to be spent with family and isn't what they've all become to one another over the course of their adventures? Boo-hoo.

Flimsy and weak. I told ya.

What Rey finds at the temple is a key that allows her to travel through space and time and see masters and apprentices throughout the saga and learn from their relationships. She presses her luck and ends up observing Palpatine and Vader, and of course she is attacked and pursued through time, inadvertently sweeeping up characters from the entire Star Wars mythology and slamming them together on a desert, much as a child would with their figurines. We're treated to split-second snippets from all three trilogies, the Clone Wars, and the Mandalorian. It's all Fan Service and as I watched it I realized... I'm a fan, and I'm totally okay with all of it. 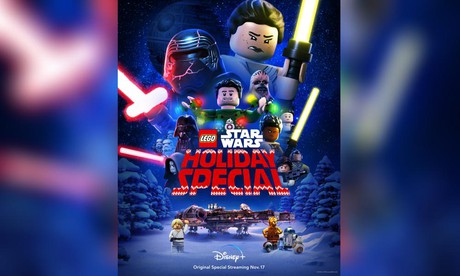 It gives us the opportunity to see a little further into the corners of conversations we've overheard for years. Like when Luke finally retorts to Yoda's binary advice on trying:

"Participation trophies for Jedi, there are not!"

We get to see WAAAAY more of Kylo Ren chilling out without his shirt. The original Death Star run is revisited, and even though the figures are LEGO, the animation is surprisingly good. We even get a little Mustafar action, with some adult words like "Hate." We revisit Kylo slicing through Snoke, and also see half of Darth Maul. See, it's not all kids' stuff!

I was impressed with the multitude of characters, though surprised by the lack of original voices. Only Kelly Marie Tran, Billy Dee Williams, and Anthony Daniels lend their actual voices to their characters, surrounded by sound-alikes. Still, it was nice to see Zorii, Max Rebo, Maz, even D-O. Finn and Rose are given more to do in this short special than they did in Episode IX, which is a nice retribution. At a sleek runtime of only 44 minutes, it is much less of a chore to enjoy than the 1978 version.

If you're a bit of kid like me and just freaking love Star Wars, you might just love the LEGO Star Wars Holiday Special as much as I did. It's streaming now on Disney+.