AICN talks with the crew behind the horror comic LAUGHTER

Ain’t It Cool News is always looking for underseen cool stuff to bring your attention to. We believe that the indie craftsmen deserve as much of a chance to be seen as the guys and girls working on blockbuster media.

With that being said, I was alerted to a new Kickstarter campaign for a comic book that struck me as fresh take on the horror genre and once I learned it was written by one of the people behind the enjoyable webcomic Bjorn Saga and had talent working on it who had previously worked on 2000 A.D., I knew I had to track this crew down and talk to them about what they have in store. First though, an introduction:

Gavin Dillinger (website), Y. Sanders (website), and Gab Contreras (website) have reached the final 10 days of their Kickstarter to fund Laughter, a horror comic focused on recovering from trauma after a demonic possession. They claim the book approaches the subject from a more dramatic standpoint than typical horror stories so AICN sat down with the team to talk about the unseen side of horror, staging emotion in artwork, and… loudly chewing bananas.

What is it about Laughter that separates it from the couple hundred other comics Kickstarters running right now?

Gavin Dillinger (Writer): I think Laughter may be one of the most original concepts on Kickstarter right now. Its intent is to explore something very human, while approaching it through a concept that is not commonplace.

But just to be clear, that isn’t a knock on any of the other campaigns. That’s just me self-promoting. 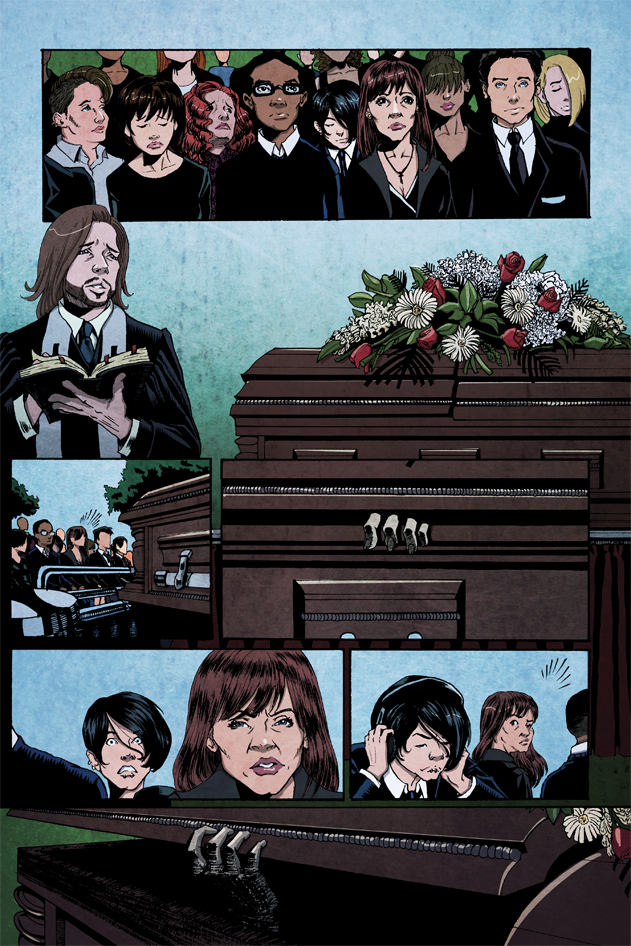 The campaign advertises the book as being after the demonic possession but then says the demon hangs around to torment the family. Isn’t this just a continuation of the demon possession?

Dillinger: While I suppose one could make that argument, I wouldn’t say so. The Sorgier appears to them as a vision and continuously eats their father’s body, but it doesn’t touch them. It would be akin to someone loudly chewing a banana with their mouth open. It’s gross, disturbing, and traumatic, but you aren’t in physical danger. That’s how The Soriger works. You could really ignore it if you want.

The story focuses on a family after the occurrence of the possession. Horror fans have long enjoyed demon possession stories, so what is important about the aftermath?

Dillinger: There are literally millions of stories; those told and untold. So when I write something I want to focus on what I feel hasn’t been told (or hasn’t been told 1,000 times already). Of the countless horrors I’ve seen and read, there’s not much time dedicated to what happens after the horror.

Therapists aren’t trained to handle this, and that’s if they even believed it. There’s not a ton of support group either. You’re left to cope in without formal resources.

How did you come up with the design for your demon?

Dillinger: When I came up with the idea I didn’t have a clear idea of how it should look, but I knew what demons typically looked like, and I didn’t want that. So when I gave the character descriptions to Y. I just asked that it not look cliche and it be something she enjoyed drawing.

Y. Sanders (Artist): I am very intrigued by the concept of 'Snakes in Suits.' In the movie American Psycho and Hannibal, both 'monsters' bear slicked back hair and suits. They encapsulate what is considered to be 'professional' and 'reliable.' With everything that has gone on in recent American history, the business suit and those that wear it has taken on a much different meaning now. I thought it would be a perfect fit for the Sorgier. 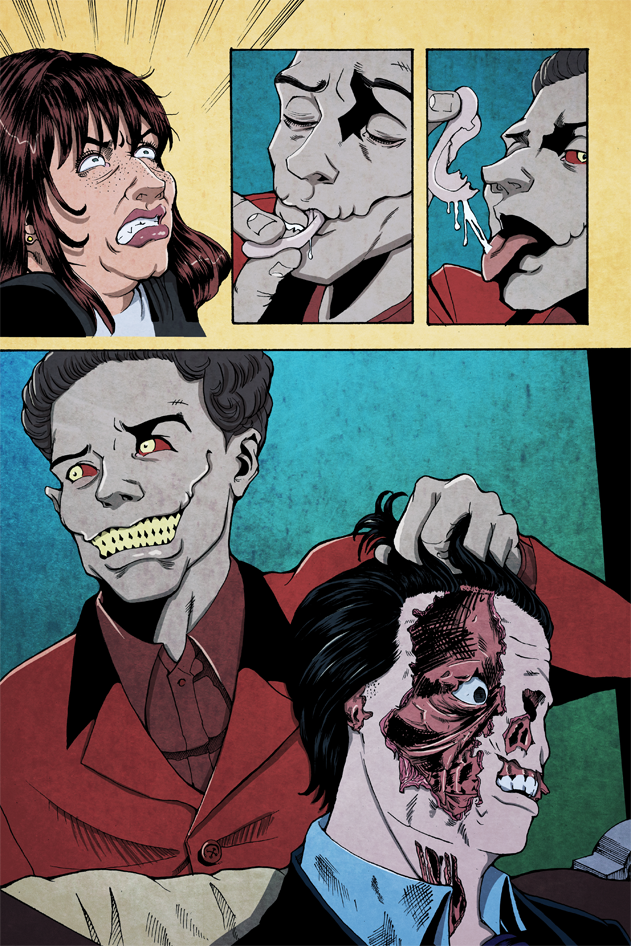 While the book carries horror themes, it appears to be mostly drama driven, focusing on the family’s response to their trauma. From an artistic standpoint, how does one make conversations and self-reflection captivating in a sequential art format?

Sanders: I focus a lot on the characters' facial expressions. It shows by having the environments and negative space surrounding them reflect their state of mind. These essential elements convey the somber tone of Laughter.

Since the story’s aim is to be emotionally driven, what has to be considered by the artist and colorist in portraying this?

Sanders: One of the things that is heavily considered when creating emotionally driven stories is atmosphere. The execution of color and inks becomes an important factor in that decision. Knowing how much to use and when to take away becomes a delicate balancing act for Gab and I. Working with Gab has been a delight because she has such a great grasp on translating my inks into those abstract emotions through her great use of color, creating something more tangible for the reader. I really couldn't ask for a better collaborator to work with 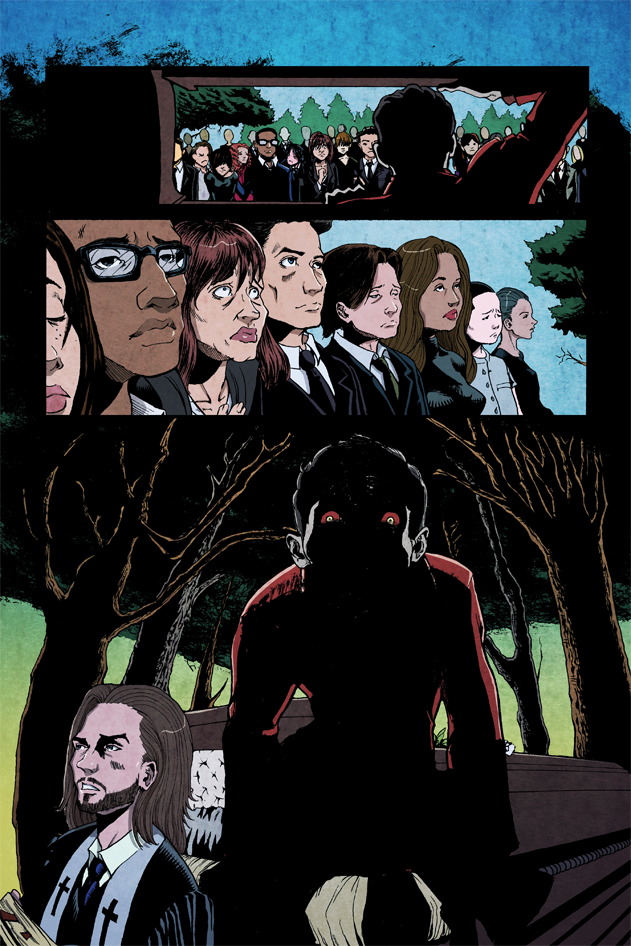 The colors have a unique texture to them. What was the intent behind this?

Gab Contreras (Colorist): With the texture on colors I wanted to create a gritty environment to point out that something is still not right. I think it works really well with Y.’s artline and the purpose of the story. I wanted to express what Gavin and Y. had in mind when they created the comic, and we had a really great time figuring out the right palette and texture for this project.

Have you considered stretch goals for your campaign?

Dillinger: We have some stuff lined up should we get there, but right now we’ll need to get closer to our goal before we announce that.

Laughter is on Kickstarter now. It is seeking $3,750 and will run through April 16th. They are close to reaching their goal. Let’s show these guys some support!