Hey folks, Barbarella here.  David Perrault's latest film, SAVAGE STATE comes out On Demand and Digital today.  The Civil-War-Era Western stars Kevin Janssens (REVENGE) as a mercenary hired to help a French colonial family travel across America in order to return to France.  While I adore Kevin Janssens, it's the women who steal the spotlight.  One of them, Kate Moran, chatted with me regarding the film and her experiences. 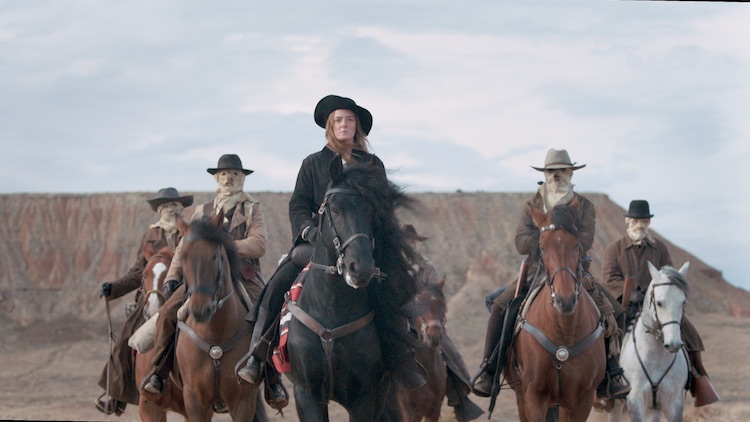 Regarding Bettie, how much backstory were you given and how much did you create on your own?

“Well, David wrote a great script.  He had seen me in another film and actually called me and said, "I have this script that I'm working on. I'd love to send it to you.  I have the part of Bettie that I'd like you to play." I read it and loved the script and loved this character because she's such a badass. I just said to him, "I'm in." And that's how it started.

“But then obviously the character gets fleshed out once you are on set, and for me, I thought about how her past has led her to where she is, and I invented her own little backstory for myself and found her way of moving.   Costumes also can factor a lot into it because she wields a knife.  That's one of her chosen weapons. How is it easy to access? How does she carry it when she's on her horse? That kind of stuff fully fleshes out a character and who she is for me. So obviously there was some stuff that I brought to it, stuff that David and I brought together, and then stuff that was already written because that was the script that he'd already envisioned.”

Since you mentioned costumes, what did you like the most and least about your costumes?

“I loved everything about my costume. She was in this wool, three-piece, cowboy suit that was fantastic. I wanted to keep it.”

“It was totally comfortable. I mean, the girls had the corsets and the big poofy skirts, and it was cold out, and they wore little shawls, and I was completely warm. I had a big, long, leather duffle coat. Bettie definitely had the best costume for the elements that we were in. I loved it.”

She seems like she'd be a fun character to play, too.

If you could incorporate any trait that she possesses into your own personality, what would it be and why?

“I think I'm somebody who overthinks, and I worry before I really need to worry.  I think that Bettie is somebody who runs on instinct, and [while playing her] even I was in the moment and didn't want to think too far in advance of how she would react in a certain situation confronting another character.  I liked the element of surprise that being in her skin brought. I never quite knew what was going to happen.  Is she going to lunge? Is she going to laugh? And I think that I would like to have a little bit more of that in my personality.”

What appealed to you the most about the story?

“I liked the idea that it was a period piece and this Western genre that's sort of flipped on itself.  We haven't really seen this type of Western.  It's a Western in the fact that it's the grandiose landscapes, like we see in so many well-known westerns, but the story itself is very much just a period piece about the Civil War and what inspires a certain family to have to leave. Then it's the elements that make it a Western with the savagery of the wild, and I liked that. I liked that it's merging those two things together.”

You mentioned the cold weather. What other types of challenges did you guys face in the elements? 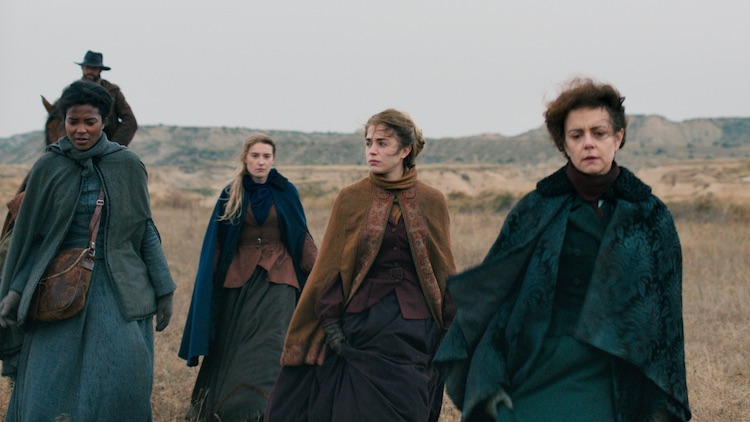 “I mean, the other girls definitely had longer stretches outside during their scenes, like when they were in the wagon and dealing with all of that stuff. My scenes, obviously it was the cold and being in the desert, but it was more just wrangling the horses.  I don't spend a lot of time on horses, and that was something that I hadn't really thought about. My horse, he was great, but he's a teenager, and just like a human teenager, he can be stubborn sometimes and not want to listen sometimes, so you have to be like, "No, you don't get to decide all the time what happens."

“There was one day, there's a scene in the film when I'm ahead of my gang, and we're in this triangle shape.  While we were waiting to get into that configuration, he just decided that he didn't want to be nice to the other horses and kept trying to bite their butts. And so I just had to keep reeling him in. I’m like, “No, that's not nice.  Can you stop trying to bother the other horses?” It’s just those funny little things that you learn that I wouldn't have ever known, that a horse can also go through a teenage phase where it's like, "Oh, usually he's not like this. He's usually a much better listener. It's just that he's going through puberty."”

That's funny. Regarding your co-star Kevin, would you share a story that would illustrate what it was like to work with him?

“It's funny because our scenes together were so cut up during the day, I feel like I actually spent more time with Esther (Alice Isaaz) than with Victor (Kevin Janssens). I guess one of the scenes that I remember is that when he comes up, and it's sort of like our last real attraction where you can see their past coming out between them, their raw tension, this love-hate thing they have. He was on his horse and rides up and he was like, "No, I'm going to stay on my horse." And I liked that dance that we had together of him being above me, and yet somehow I still managed to usurp the power a little bit. I liked that dynamic of you never quite know with the two of them.  Do they love each other? Do they hate each other? Impossible to know because they really could just blow each other's heads off, and that would be the end of their story, but yet they somehow can't quite bring themselves to do it, so they torture other people around them. 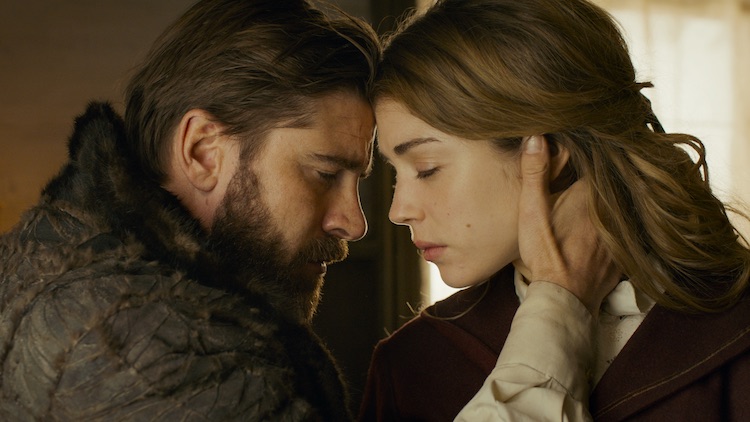 Right. I think it's hard for people to let go of relationships. I mean, to me, that was sort of what that was illustrating.

If you could live during the Civil War era, not necessarily like where the war is happening, would you want to?  Why or why not?

“No, I don't really think that I would. I think we still have a lot of the same problems today that we had then, but we still have constant electricity, or at least hopefully we do. I don't know how much we've evolved actually from the Civil War in a lot of ways, unfortunately, having seen the recent past.”

Would you share a story that would illustrate what it was like to work with David Perrault?

“I think that just the story of how he approached me to do the film is a good indication of what it's like to work with him. He had a vision for this film, and he knew where he was going with it. This is just his second feature, but he had a very sure way of looking at what he wanted. And you can see that, even in the beauty that is portrayed in the cinematography of the film, which obviously being on set I didn't see, so it was really a nice surprise for me, watching the film, to see how beautiful it is.

“And just the fact that he had seen me in something, and he thought, "Oh, that's Bettie for me." And just called me up, sent me the script, said, "Do you want to do it?" There wasn't anything like, "Oh, can we test? Would you read for the part? I see you with another actor, let's see how it works." He just knew like, "This is what I want, how we're going to do it. Okay, I'll call you when we're ready to shoot." And that's how we went forward. And I think that that shows a very sure vision on his part.”

How did you pass the time when you weren't filming?

“I spent a lot of time begging trainers to get some apples and stuff.”

“Yeah. Because obviously they're trained, so they're not just your pet. They're on their job too, so they can't just have snacks all the time. I was always like, "He was really good for the last few hours. Can I please give him an apple slice?" So, I spent a lot of time with my horse, begging the trainer to spoil him a little bit.” 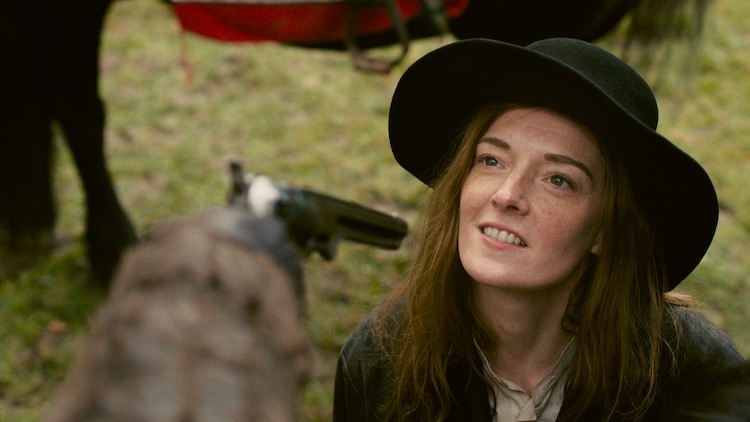 “My first love is stage acting, so I think that it comes the easiest.  I get terrible stage fright, but it's what I love. I love the rehearsal process. I love the smell of an old theater. I love that fear right before going on stage, and then the exhilaration to feel the audience and all of that. I think maybe the hardest thing, because I came into doing film and TV later than stage acting, was – I’m sure everybody says this – the waiting. There's something that when you come from stage, it's like you can always be helpful, especially in New York.  You can always go and clean the bathroom, or help clean the set, do something, be productive.

“And on film, I don't have the capacity to know how to help the electrics or anything.  You’re just sitting in your trailer feeling very precious because it's pouring rain, and people are hanging lights and doing lots of really complicated things to make the scene look beautiful. Obviously, your job is to get out there and nail it so you're not wasting anybody's time and you're projecting it for the final film.  That is what your job is, but I think that it was hard for me, especially in the beginning to be like, "That is my job. Just be ready for that moment, and give it the all you can." In the beginning, it's like, "Oh my God, one more person asks me if I need a cup of coffee. I should be bringing everybody coffee. They're all freezing out there and cold, and I'm sitting in here doing nothing."

What's the most memorable audition you've ever had?

“I was in an opera by Philip Glass and Robert Wilson called “Einstein on the Beach.” And it was the 2012 reprisal of an opera that was created in 1976. I had studied it in college.  This was like a dream production that I had always even just wanted to see.  To be able to just audition for it was a dream, and then I got the part. It was for me like that thing where you have to pinch yourself to believe that you actually got this thing that you dreamed of.  I had these masters: Robert Wilson, who's this iconic, just groundbreaking theater director, Philip Glass, who is a musical genius, and Lucinda Childs, who was a choreographer of a world-renowned top level. All three of them were sitting in this audition in front of me, and that's insane.  And then I got to work with them, so yeah, I think that was a pretty intense audition.”

You can see Kate Moran in SAVAGE STATE, which is now available On Demand and Digital.