Hey friends!  Barbarella pleased to report that I’m still here after conversing with Death.  Okay, so my conversation was not with actual Death, but with Julian Richings, who played Death on the CW’s “Supernatural.”  The character-actor currently has two projects coming out: Horror-action film SPARE PARTS will be available on VOD, Digital, DVD, and Blu-ray on June 1, 2021, and the creepy ANYTHING FOR JACKSON will be available on VOD, Digital, HD, DVD, and Blu-ray on June 15, 2021.  I spoke with Julian about both.

I loved ANYTHING FOR JACKSON.  What did you find most appealing about Keith Cooper's script?

“Well, it is a beautiful script. I read it, and I went, "Wow, this is terrific."  I loved it because it's kind of an outrageous story, but it's cloaked in reality. Our central characters, Henry and Audrey, love each other and have a long relationship, a devoted relationship, but they're vulnerable; they’re grieving, and I think everybody identifies with that.  The problem is that in their grief, they enable terrible actions, and they enable each other to perpetrate terrible things, so it's a really interesting tug on your emotions, as a viewer.  You go, "I like these people, but it's terrible what they're doing.  And I am rooting for them, but I don't know if I should be rooting for them."  That's what I love about it.”

Would you describe working with Sheila McCarthy?  How easy or difficult is it to create that kind of bond needed to convey that this couple has been in a decades-long relationship?

“Well, it can be difficult.  In this case, it was just a joy.  Sheila and I share similar backgrounds in many ways.  We both grew up in the theater.  We both have done similar sorts of film roles.  We often, the two of us, play outliers in many ways.  We play eccentric people on the margins, and sometimes comedic, sometimes scary.

“And we didn't know each other well, but we knew of each other, so it wasn't difficult to collaborate.  Also, we have the same vocabulary, having been through all the same experiences and the same training, so when we were talking, we were always on the same page, and we shared the same jargon, the actor's jargon, if you like. The other thing was that because we've grown up in the theater, we're very used to checking in with the other actor to make sure that the scene makes sense, not just to ourselves, but to the other person.  That's so vital to the performance.

“So, yeah, it was a lot of fun.  We didn't have a lot of time.  It was a quick shoot, and we had COVID looming over the shoot.  Our final day was March 13th, which was when the country shut down with COVID, so there was a sense of urgency, a creeping urgency, that I think infects the film in some ways.

“But Sheila and I were able to draw on that and we made many of our decisions together.  We never went, "Well, my character would do this."  It was always, "Well, what would we do?  What would Audrey and Henry do?"  And if Henry did a certain thing, how would Audrey react to that?  We charted our progress as a couple.”

Right. There were many scenes that creeped me out.  What kinds of things do you find creepy?

“Oh, dear.  I don't know.  Horror-splatter stuff, it's okay.  I avert my eyes.  It doesn't creep me out.  You know what?  It's weird.  The movies that I can’t watch are the kind of movies where there's a fundamental secret, or somebody is pretending to be something that they're not, and I'm always terrified they're going to get found out.  For instance, a movie like DONNIE BRASCOE, it is a great movie, great actors, but I'm sitting there on the edge of my seat all the way through going, "Oh, my God, he's going to get caught.  They're going to find out who he is."  I get torn into knots more in that kind of a situation than I do in just straight up haunted-house movies or splatter movies.”

If you thought that you could bring a loved one back from the dead, would you try it? Why or why not?

“No. Having gone through ANYTHING FOR JACKSON, I think that the warning is out there: Don't do this at home, not a good idea.  No matter how much you loved your partner and how aggrieved you are at the loss of your child, don't do it.”

Had you always been a fan of horror, or did that evolve because you kept getting cast in horror projects?

“So inevitably, I've played kind of peripheral, primary colors in stories. That's happened, and as a result, the horror medium has come up a few times. I have a very specific facial structure, so people like putting special effects makeup [on me], and I become creatures and stuff, so it's evolved.

“But I must say, my interest in horror goes right back to as a kid when I used to watch summer horror in Britain in the '60s.  Even as a kid at home, I would watch NIGHT OF THE HUNTER on my TV.  It was one of those movies, those great black-and-white, gothic movies that influenced me and introduced the notion of dread.”

Cool. You’re also in SPARE PARTS. What appealed to you about that character?  Had you always wanted to be an emperor? Is that why you took that role? 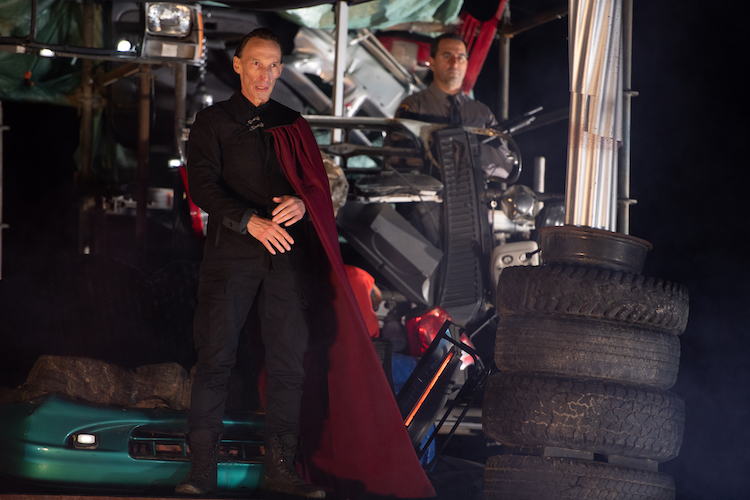 “(Laughing) Yes, I've always wanted to strut around and be the top dog.  No, it's kind of a post-apocalyptic, punk, junkyard apocalypse.  I like the audacity and the energy of it.  I liked our four women, our main actors who take on the most appalling ... What would you call it?  I guess, well, adjustments.”

Adjustments. That's a good word for it.

There were some scenes where I could see people's breath when they were talking. How cold was it during that shoot, and how difficult is it to shoot in the elements?

“Freezing!  It was absolutely freezing.  And it was November in Northern Ontario, outside of Sudbury.  It was in a junkyard, a fantastic environment created by our production designer, Vince Moskowec, who I've worked with before.  He creates these incredible places with not a lot of resources.  In order to make it maximally effective, he did it actually on the junkyard.  We're talking about a plane in Northern Ontario, where the wind is whipping across there in November, and we were just absolutely freezing.  And yes, it's the reality.  I was luckier.  I had a jacket and a cloak on.  The poor women who were in the arena fighting were very scantily clad and were absolutely freezing, which is why they got so much energy, and they're fighting so well.  It's that they're keeping warm all the time.  But sure enough, you can see the breath coming out of us as we're speaking.” 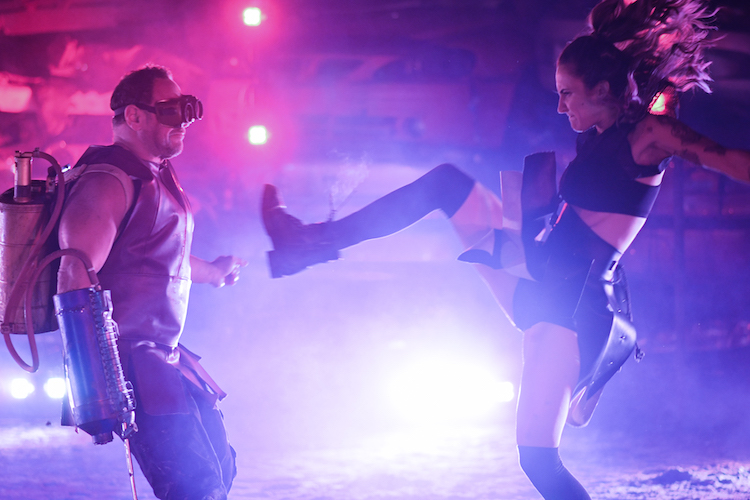 What was the most memorable part of working on each of these two films?

“Memorable? I don't know. I think as you look back, you look back on the tonal, residual memory, I guess.  And I'd say with SPARE PARTS, it's the energy and the take-no-prisoners, DIY craziness of it.  It was like a punk roar, and it was put together in a very pragmatic, smart way.  It’s low budget and high intensity, so I enjoyed the mischief of that.

“ANYTHING FOR JACKSON was more of a chamber piece, like a slow intake of breath and escalating tension and a creeping unease, and that's because of the unraveling of the script and the fact that it's not a primal scream like SPARE PARTS. It's more of an insidious playing on your mind and a creeping tension.”

Do you ever have nightmares about any of the projects in which you've been involved?

“No, it's funny.  When you are on a set, you actually don't.  Everything is practical and pragmatic, and it just becomes decoration.  I remember one time, I did the original WRONG TURN, and I played Three Finger.  There were some pretty gruesome sets in that movie, and I remember at the time, my kids came onto the set.  I had invited them over one day because it was a good idea for them to come.  I said, "Oh my God."  I'd suddenly realized this set, there were body parts around and buckets full of blood, and I thought, "This is really irresponsible.  Why am I doing it?"  I looked over to see where my kids were, and to make sure that they were okay.

“And I was just ready to pull them away and say, "Well, come on over here. We'll go for a little walk." My son came running over to me, "Dad, dad, dad, dad.  Fantastic craft service."  And they went through the whole list of all the snacks that they had.  [They were] completely oblivious to all the horrors that were hanging on the wall and the splatters everywhere.  Do you know what I mean?  It's like, it's just there, and people are getting on with putting the puzzle together.  I like that about horror films.  I like the fact that they're very practical, and that every scene you do often is about a moment or a gag or a shock or a scare, so it's very rhythmic.

“And everything is dependent on collaboration from all departments, makeup, lighting, special effects.  There are all those things that are very practical, so horror movies actually, are very technical, and they're not emotional terrors.  They're actually quite fun.  It's almost like you choreograph your way through them.  I don't tend to be involved in many emotional, romantic movies with intense relationships, but I would imagine they can be quite disturbing at times, if you get trapped in particular emotions.”

Yeah. What do you like to do during your downtime on set?

“Downtime?  I'm not very good at downtime.  I pace around, and I wait for when I'm coming in for the next one.  It relates to the last couple things that I was saying, where it's very rhythmic.  I don't want to drop the ball.  I want to maintain the rhythm and the energy, and come in with the right energy for the scene I'm about to do.

“If I'm not learning lines, then it's an action or a moment [for which] I'm getting ready.  I'm not a very good companion.  I'm not funny, and I don't have anecdotes, so I just pace around.  I'm the guy that you go, "Oh, my God, he's doing it again.  When do you ever keep still?"

Well, with several projects in production, it appears Julian Richings won’t be keeping still anytime soon.  SPARE PARTS and ANYTHING FOR JACKSON will both be available in June on a variety of platforms.