Hey, friends. Barbarella here. Have I ever told you how much I love Norwegian disaster movies? I mean, they are so well executed, shot in beautiful locations, have believable characters, and they’re just so darned entertaining. It should come as no surprise that I jumped at the opportunity to speak with one of my favorite Scandinavian filmmakers, John Andreas Andersen. His latest, THE BURNING SEA, comes out today in theaters and on demand and digital. Although it’s worth checking out for the visuals alone, it offers so much more, including corporate types who feel more human than their counterparts in American, studio-made disaster films.

In the film, a crack in the ocean floor causes an oil rig to collapse. When a team goes in to search for the missing and assess the damage, it discovers this could be just the beginning of an apocalyptic catastrophe. 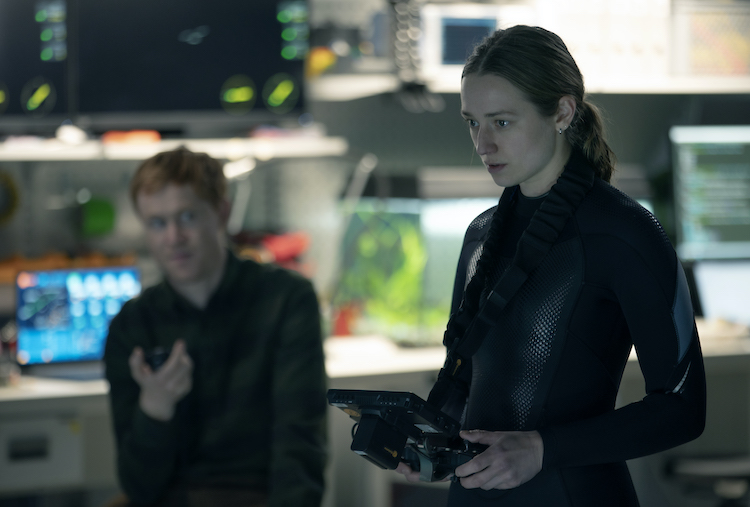 I would’ve loved to have had the time to dig deeply into a number of topics with John, perhaps over a beer, but given that he was in Oslo, Norway, that wasn’t really an option. Instead, I hopped on Skype with him from my Texas home and managed to touch on a few of the topics that interested me. Check it out.

If you had to be stuck in a situation from a Norwegian disaster movie, would you rather it be from The Wave, The Quake, or The Burning Sea, and why?

“Oh, that's a difficult question. I think The Burning Sea is probably the one where you have at least some opportunity to get away from it.”

The movie is beautifully shot, and it looks so expensive. I read that it cost somewhere around €6.5 million (about $12 million) to make. If that's true, how are you able to make movies that look like $80-million movies for that kind of price? What's the secret?

“Well, first of all, thank you. Of course, we compete in the same marketplace as very big Hollywood movies, as you know. Our film, I guess, cost the lunch budget of a Hollywood film, but yeah. It's a bit weird, but it's possible. I think one of the reasons why it's possible is because when it comes to visual effects, there's been this little group of people that has really developed into, I think, really amazing VFX artists in Oslo and in Norway, so it's given us the possibility to suddenly do these films and tell these stories that we couldn't do before, because it was too expensive. Even though Norway is a very high-cost country, the VFX artists somehow managed to do this at a much lower cost than Hollywood. They did a wonderful job on this film.

“Also, we have to pick our battles. We can't really shoot a film that gives us every possible option in editing. We have to decide quite early which parts we want to spend our money on.”

My understanding was that this was shot on actual oil rigs. How were you able to get permission to do that, and logistically how did that work? 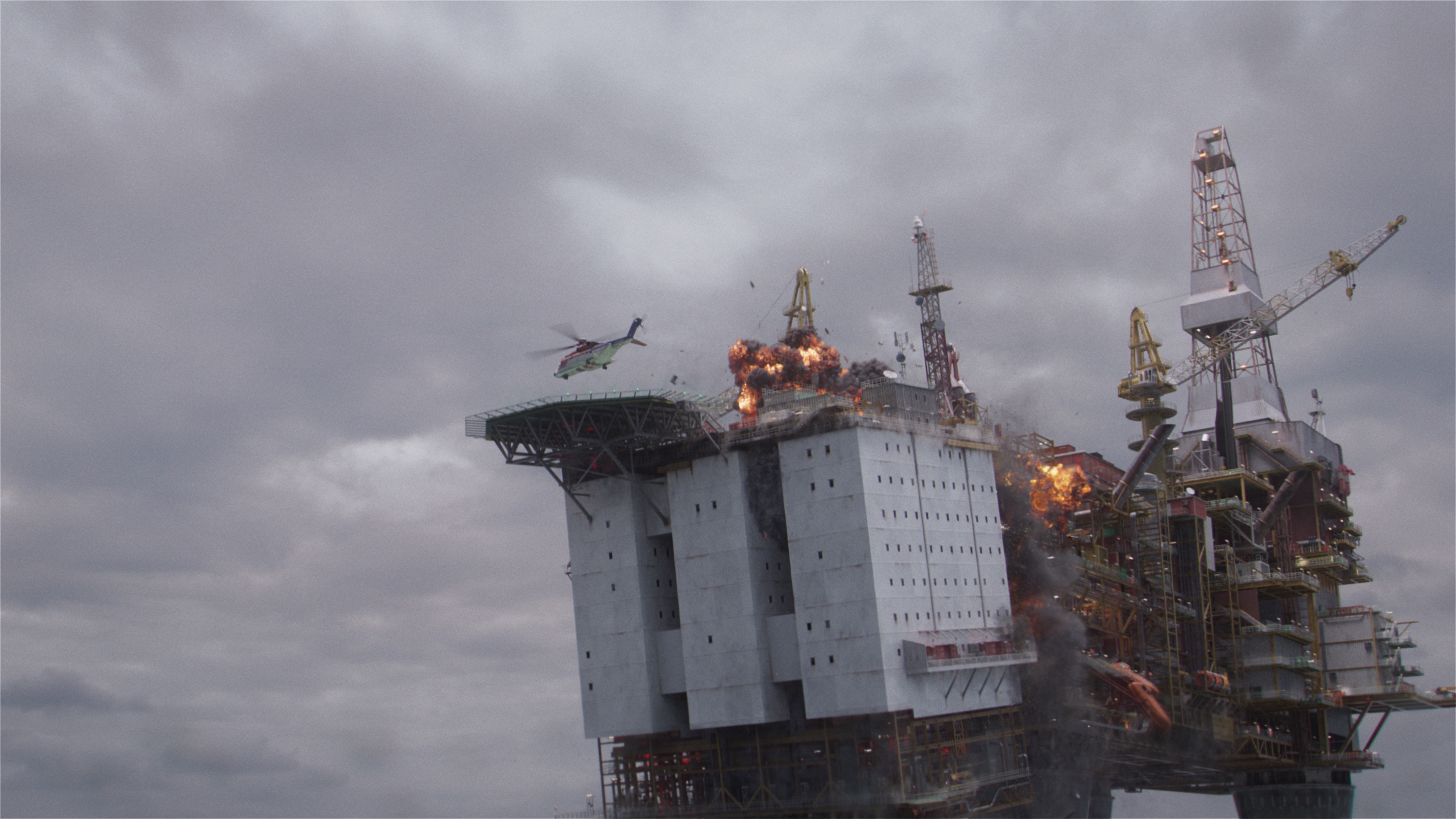 “That was a huge challenge, because, I mean, first of all we had planned on maybe doing some stuff in studio or some stuff in other countries, but then COVID came along, and we realized that we had to shoot everything in Norway. You could read the film as a little bit critical towards the oil industry, so we were afraid that would close these doors for us, but the oil industry in Norway really stepped up to the plate and gave us access, and like you say, getting access to these rigs is really difficult. [There are] a lot of issues with safety, and the whole crew had to take safety courses and stuff like this, but in the end, I'm very happy with it because it gave us these amazing locations that are real. I mean, even when the helicopter is nose-diving, it's a real helicopter nose-diving. I think that really lent some realism to the film that I'm super happy with.”

Yeah, I loved the locations, and I just thought it looked amazing. I'm curious about writer collaboration on projects. Did the writers just hand over the script and let you run with it? What kind of involvement did they have once the shooting started? Were they on set, changing things up at all?

“No, not really. I mean, I know these writers. My background is as a director of photography, and I started my career shooting a film written by one of these screenwriters, so I've known them for a long time. They're on hand if I need something. Of course, always during the shoot, there's some things that you see that, okay, maybe we want to follow down a certain path a bit more than we had in the script. But on the other hand, the writers sort of let me do my thing once we get going. This film is a very close collaboration with the producer and the writers and me.”

What is the riskiest thing you've done in the name of art?

“I think I did tons of stupid stuff, especially when I was younger. I worked as a cinematographer, hanging out of buildings and strapping myself to the top of cars driving. I've done really a lot of very stupid things, but hopefully not that many in the last ten years. But yeah, I've been hanging out of airplanes and helicopters and cars and buildings and stuff. I think those were probably the more risky [ones].”

The original title of this was The North Sea. Why did it get changed?

“I think Magnolia gave it a different title. I'm actually quite happy with the English title. In a way, I think that works better internationally than The North Sea. For Norwegians, North Sea means much more than just the North Sea. It means you're talking about a whole industry. Everyone knows it's the base of our wealth. The North Sea is where all the money in Norway comes from, and I think that probably doesn't bring that much through internationally. I think it's quite good to just call it The Burning Sea, actually.”

I feel like it's a little bit of a spoiler, but I still thought it was good.

“Yeah, you're right about that. It is a bit of a spoiler, but then again trailers these days – they do tend to spoil quite a bit, don't they?"

That's true. What are the conversations in Norway about oil-drilling these days, and how do you think this film will impact those?

"I don't know if the film will impact those, but certainly we were inspired by those discussions. I mean, we shot this film in a time when it was leading up to an election in Norway. One of the big topics of discussion for that election was that you had political parties in Norway sort of starting to demand an end-date for Norway to stop drilling for oil. We're like this sort of oil-junkie nation. It's this weird paradox, because we're the country in the world with the highest share of electric cars, I think. The last statistic I saw was nine out of ten new cars sold in Norway are now electric. On the other hand, we are super dependent on the oil industry for...well, it's the base of the wealthy society that Norway is today.

"So it is sort of this paradox, and I think in the film, there's this crack on the ocean floor that brings [challenges to the] oil industry, and of course, it's easy for you to replace that [and] say that it's about global warming instead, but global warming doesn't happen fast enough to make an exciting film, for an action film, at least. I think we were definitely inspired by some of those discussions that were happening in Norway at that time, and these discussions, they're still happening in Norway."

Were any of the characters based on people you knew, or on specific people in Norway?

“None of them was based on one specific person, but I was certainly inspired by [growing up] in the southwest part of Norway, where a lot of the oil workers come from. I'm from a very small town where I grew up with fathers of some of my friends going away and working on an oil rig, and being away for two weeks and then being home for four weeks. It's a very weird life. So yeah, I was certainly inspired by some of the stories that I heard growing up, but there's not one specific character. All the characters are fictional.”

THE BURNING SEA opens today in theaters and on demand and digital, and I think it’s worth catching on the big screen because it genuinely looks amazing. The trailer contains a ton of spoilers, so if you don’t mind that, check it out, or just skip it and watch the whole film. That’s really the better option.