Barbarella Chats With Joe Swanberg Who Stars in OFFSEASON

Hey, friends. Horror film OFFSEASON hits theaters, VOD and Digital on March 11, 2022. In the film, at the behest of a mysterious letter, Marie returns to the island where her late mother is buried as it is closing for the offseason. Strange encounters with the locals hint that all is not right in this small town.

I had the opportunity to speak with Joe Swanberg, who plays George. Check it out. 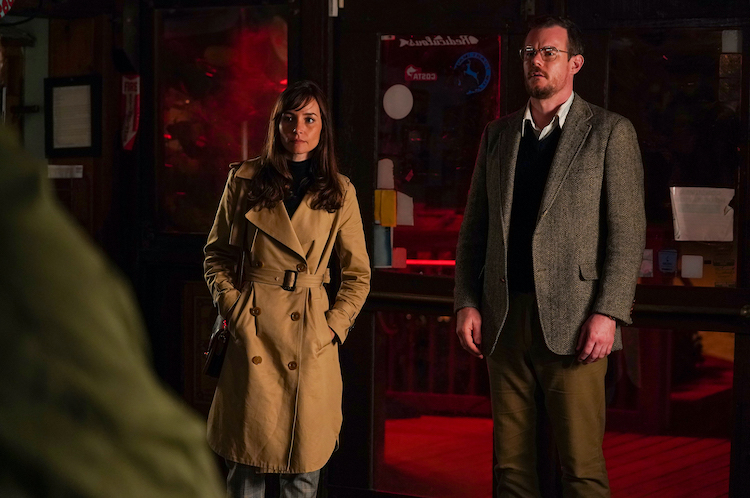 For our readers who haven’t seen it yet, I'm not going to say whether or not you survive this film, but in other films, I think that your character generally gets killed. Why do you think filmmakers enjoy seeing you die so much?

“I'm so glad you're finally giving me the opportunity to talk about this. My abusive and sadistic group of friends do not miss any opportunity to humiliate me, cover me in fake blood, stab me, put squibs on me, and blow me up. It's time people noticed and took a stand.

“I don't know. I think I'm just easy to abuse. They know that I'm a director, myself, and that I've been on their side of the line. I'm willing to endure a lot of crap. The thing is, dying in a movie is messy, always. Somehow, you end up sticky, cold, just all the possible bad things. I'm just an easy target there. "I know who will do this. Joe will do it."”

If you could choose the manner of death for your next role, how would you like your character to die?

“I've never had a face mold or a head mold made. If I got to do a thing I've never done, I would have my head explode or something where it switched over to some kind of mold-head of mine blowing up or something like that. I think that'd be cool.”

That would be cool. What appealed to you the most about OFFSEASON?

“Well, I just wanted to work with Mickey. I didn't even read the script or know what the movie was when I said "yes" to it. I was so excited and happy he had called me. [I] was like, "I'll do whatever, Mickey. I've been wanting to work with you. Count me in."

“But then, once I read the script, and we talked about the project, and I wrapped my head around the character, I had a lot of fun. Mickey allowed me to bring some naturalism and some of my own energy to it. I always like when I get to improvise a little and ground these characters in supernatural or mystical kinds of movies into more naturalistic character spaces.”

How much ad-libbing did you guys do?

“Not a ton. It was a scripted movie. Mickey's very much a writer, but we did get to play around. There were certain areas where it felt like the relationship would make more sense or it would feel a little more naturalistic if we improvised some dialogue or modified stuff, [so we did] a little bit. A couple of those scenes, especially the stuff in the car, I feel like we had some freedom to just shoot longer takes and riff on some things. Most of the stuff outside of the car is closer to the script.” 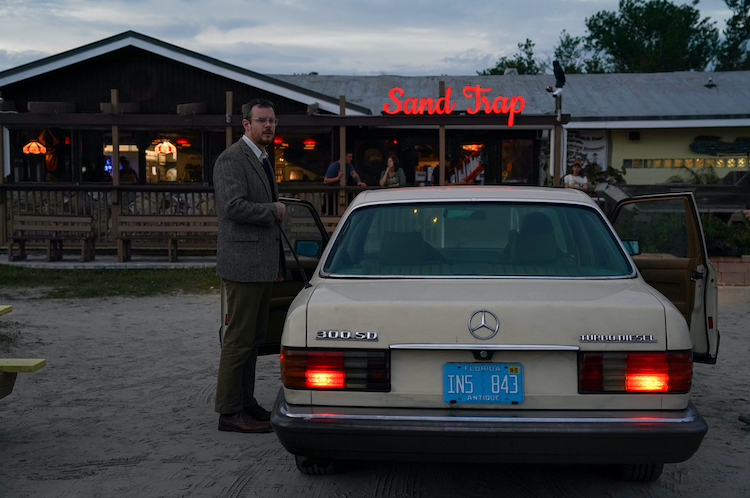 Would you want to go on a road trip with George? Why or why not?

“Absolutely not. He seems insufferable to me. For the same reason, I wouldn't want to clone myself and go on a road trip with myself. One version of me would kill the other within two hours.”

Exactly how many fog machines were on set, and did you find the fog distracting or helpful for getting into character?

“Oh, my God. The fog was omnipresent, but the truth is, I am willing to endure anything as an actor when I think the footage is looking really cool and when the director is happy. We were constantly wrestling with the fog, but once I got to look at it, I was like, "I see what's going on. All right, cool."

“Then, it becomes fun. I become part of the challenge of walking through just the right density of fog, or having it part and reveal just enough of the frame, and all those kinds of technical challenges give you something to do. A lot of times, if you're sitting on set and you have to do ten or fifteen takes of something, it can get long, and you can lose focus, but when it's really technical like that, and you know what you're trying to get, it becomes almost like a game. It is fun.” 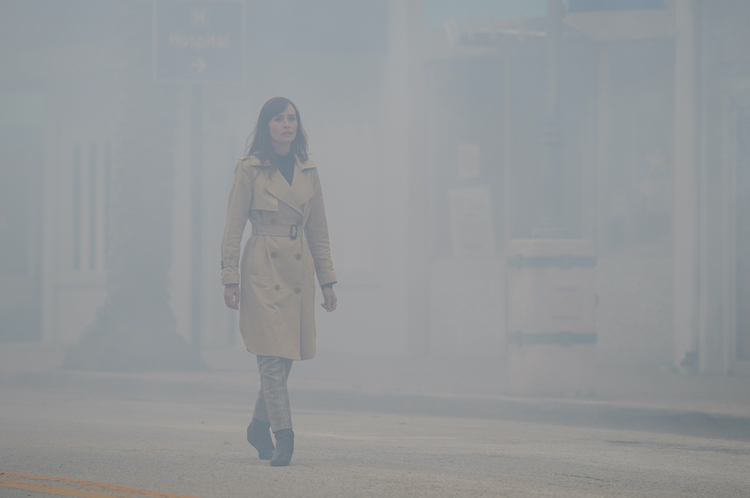 As a director, also, when you're acting, were you comparing and contrasting your style of directing with Mickey's?

“Always. Definitely. I'm always paying very close attention to any director that I'm working with, trying to see what their style is, what they want. Yeah. As an actor, I really want the director to be happy, because when I'm directing, I want my actors to do what I want. I can't not be myself, but within what I'm stuck working with, I'll usually try anything for a director. The more specific they can be, the better.

“I felt that Mickey knew exactly what he wanted, knew which areas were easy to be flexible in and which ones needed to hit specific beats. I was really having fun playing around and existing in the space between my style and his, always telling him, "Feel free to change what I'm doing, but I'm going to try and give you something grounded and realistic-feeling. Then, we can get bigger from there." 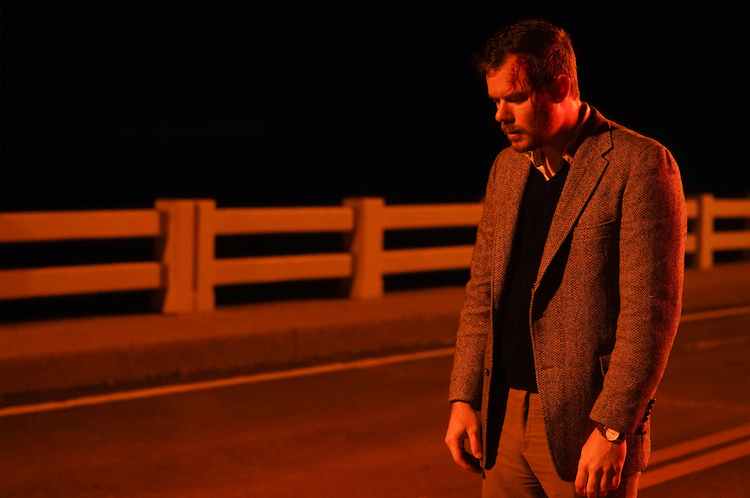 What are the pros and cons of working on a movie in Florida?

“I only saw pros. I had such a nice time. I live in Chicago. We made this in January. Any time you escape Chicago in January, and you get to go to Florida, life is very good. I was in heaven. I was just walking around. It felt so warm and nice. I took long walks on the beach at night and just thought it was a tremendous experience.”

Very cool. What was your favorite day on set and why?

“There were two days that we shot in a national park area, and they were challenging days. They were cold. We were dealing with a rain machine. Our car broke down. But I think those were my favorite two days, just because we had to solve the problems, pull together as a crew, and figure things out.

“And there's something about that energy that I really like. You get to know everybody better. You bond, almost in a summer-camp-type way or something. Those are the two most memorable, to me, even though they were also possibly the most physically uncomfortable, but ultimately, positive experiences.” 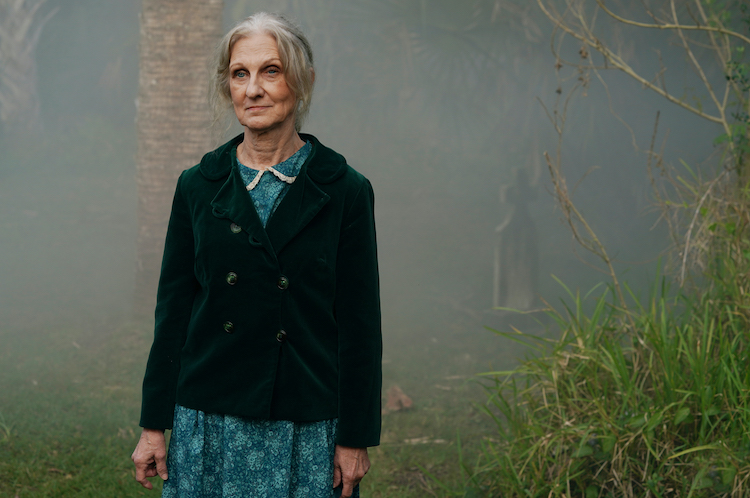 I believe that we're constantly learning. What did you learn from working on OFFSEASON?

“A lot. Mickey just created such a good onset vibe. I just found his sense of humor to be really sharp and funny. He had me and everybody else laughing a lot, and he's a cool customer. He was unflappable. I even loved when the producers or someone would come to him and say, "We can't do it like that [for] this reason." He always had a good backup plan. He always took it in stride. He never seems upset. I definitely am going to steal some tricks from him, and while I’m on the set of my next movie, keep in mind how nice it feels to feel like you're working for someone who is levelheaded and easygoing.”

What do you think is the most important quality for a director to have? 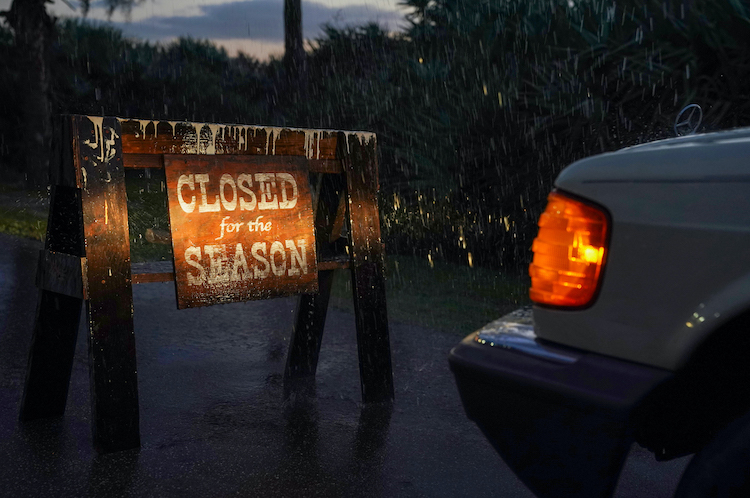 “Well, there are always going to be obstacles and hurdles and crazy, last-minute things thrown in the way. I just think at the core of a director needs to be someone who isn't going to freeze or freak out. You have to take all that stuff in stride and be realistic about it and move on and make adjustments. I guess, "flexibility" would be the word. It's not going to go the way you want it to go. Even the directors at the highest level, who have all the money in the world and all the studio backing and everything, they're still going to have days on set where they're just not going to get what they want, for one reason or another. You need to accept that, move on from there, and not become fixated or stuck or petulant or anything.”

Right. Well, hey, that's all the time that I have. It was really nice talking with you.

Have a good one, and hopefully, your head gets blown up in some movie in the future.

“Thank you very much. I appreciate that.”

If you want to check out Joe Swanberg, Jocelin Donahue, Richard Brake, Melora Walters and Jeremy Gardner in the visually interesting horror film OFFSEASON, it will be available this Friday, March 11, 2022 in theaters and on VOD and Digital. Check out the trailer.