Hey, friends!  Barbarella here on a chilly morning in Texas.  Fans of rotoscoped animation have a reason to celebrate, as the mesmerizing and graphic fantasy-feature SPINE OF THE NIGHT is now available in Theaters, On Demand, and on Digital.   Philip Gelatt and Morgan Galen King created the epic tale of an ambitious man who falls to his darker temptations after stealing forbidden knowledge from a sacred plant.  The film stars the voices of Richard E. Grant, Lucy Lawless, Patton Oswalt, and Joe Manganiello.  I had the following chat with the latter.  Check it out.

How did you get involved in SPINE OF THE NIGHT?

"It was just an incoming call. “Do you want to talk to these guys who made this psychedelic, ultraviolent, rotoscoped, fantasy-horror film?”  I said, “Yeah, of course, I want to talk to them.”  Those are the kinds of movies and things that I grew up on, or I should say, the things that made me most excited when I was younger.  I was obsessed with all films like that and anything fantasy related.  You’d have to ask them, but I think that's probably why they reached out to me because they knew that I was a champion of that type of aesthetic.  I don't know; it's probably from just raising my freak flag and letting people know, “Hey, I'm right over here, and I get what you're doing, so give me a call,” and they did.” 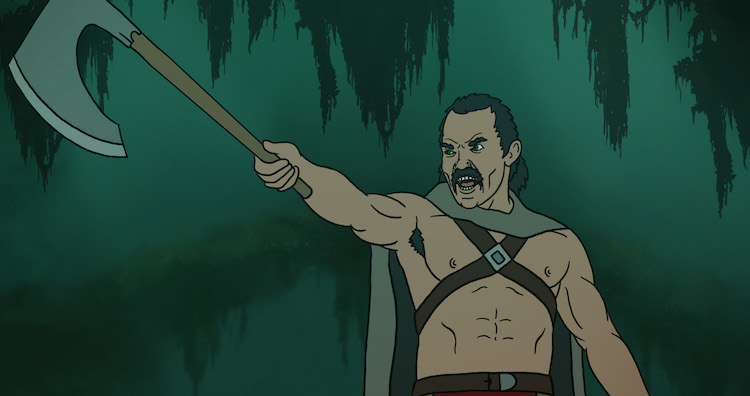 With some animated films the cast gets in the room together while recording the audio, and with others, each actor kind of goes in solo and records.  What was the process on this one, and how did you find it?

“It was solo.  Most of the recording I do animated is solo.  I mean, I've done a ton of animated work over the pandemic.  Of course, you're not getting in a room with anyone else.  For the last two years, I've just done a ton of animated stuff at home.  They send the magic briefcase, but this one was recorded before the pandemic hit.  Still, it was just me in the studio by myself, and it was great.  There was no difference really to any other experience other than the fact that because of the nature of rotoscope, they actually filmed live-action scenes with actors doing the dialogue, and it comes with a certain cadence and timing, so I had to match my voice and my cadence to that of the actor who actually did the live acting that they spent six, seven years hand-painting every cell.  In other animated projects, sometimes they’re animating to your cadence.  They're animating to how you look, or especially in 3D animation, like Zack Snyder's Army of The Dead: Las Vegas, they had cameras in my face looking to see my facial movements for the artists, but this one was already finished. 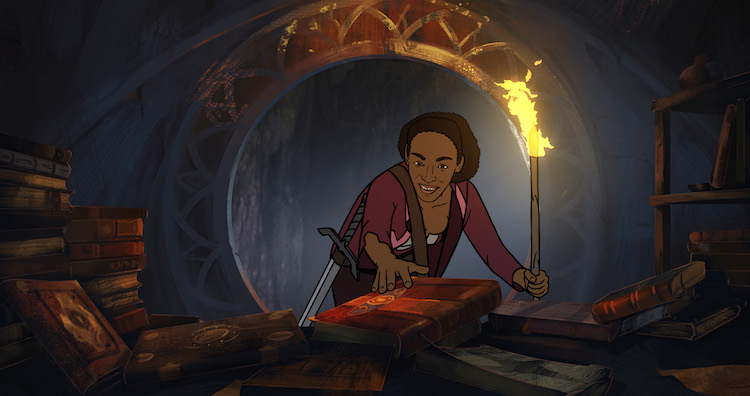 “That's a very philosophical question you're asking me, and yes, I do think that it is.  There’s example after example throughout our history, and I think there's a real attempt to separate any sort of influence of capitalism or wielding power against others through knowledge.  If you look at monks, they're just, “What is life about?” and they separate themselves completely from capitalism, trade, earthly pleasures, to a certain degree, to try to keep themselves pure in a way, because ultimately, I think, anybody who achieves power, no matter who you are and no matter who you're replacing now, you're going to be faced with the same questions of corruption and abusing that power that the people before you had, and so I think then that becomes the dilemma.  You can look at any period of history and see that.”

If you could only be one, would you rather be incredibly attractive or incredibly intelligent and why?

No, you can only be one.

“I don't have to be one.  I mean, I'm not trying to be a jerk.  I'm just saying, I think the Greeks had it right.  They worshiped athleticism, but they also worshiped philosophy, and where I grew up, Pittsburgh, is a great example of that.  It's a great city for sports, and it's also an incredible city for the arts.  I was lucky to grow up in a city like that, where I wasn't encouraged to pick one or the other; I was encouraged to be both, and my heroes growing up were both.”

I'm assuming that you've watched the entire film SPINE OF THE NIGHT.  Do you have any thoughts about it that you want to share? 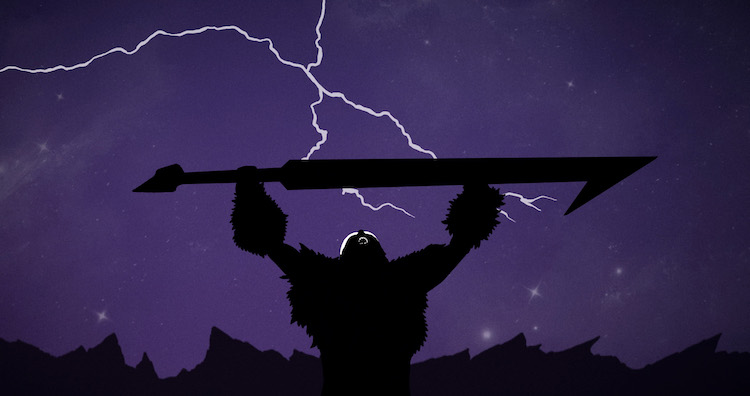 “There’s nothing else out there like it, and I think it scratches an itch that is very rare these days, and I'm glad that it exists.  I'm glad it's shocking in all the ways you want it to be shocking.  I think it's the way it mixes psychedelia and the late 70’s, early 80’s, Ralph Bakshi, Frank Frazetta style of art and aesthetic is right up my alley.  Here’s the thing; the big litmus test was showing it to Sophia.  Psychedelic fantasy, hyper-violent horror, that's not her bag, so I just thought she's going to walk out of the room after five minutes and start looking at her phone, and she didn't.  She made it all the way to the end.  She loved it.  She thought it was great.  To me, that says that anybody who's into that type of film, they're going to watch it, but you can watch it with your significant other, and your significant other is not going to be bored.  They're going to stay with the story and get involved.

"I think there's something really for everybody.  It's really fun because of how hard it goes out of the gate, and so I'm excited for the responses.  I'm excited for people who weren't in that late-70’s, early-80’s niche audience, who weren't a part of that, to see it, because I think it's just going to open their eyes, especially in a post-Lord-of-the-Rings, post-Game-of-Thrones world. I think that this is something that could appeal to everybody.”

Yeah, it’s so mesmerizing to watch.  What are you most looking forward to in 2022?

“Well, I'm working on the show Moonhaven right now for AMC here in Dublin, Ireland.  I'm very excited to see those episodes come together.  I recorded another animated series with Zack Snyder, and I'm really excited to see that put together for next year.   I'm excited for those two, probably more than anything else, I think.”

If you’re interested in checking out something unlike anything else that’s been made in quite some time, check out SPINE OF THE NIGHT, and listen for Joe Manganiello, who voices Mongrel.  The film is available now in Theaters, on Digital, and On Demand.  Check out the trailer. 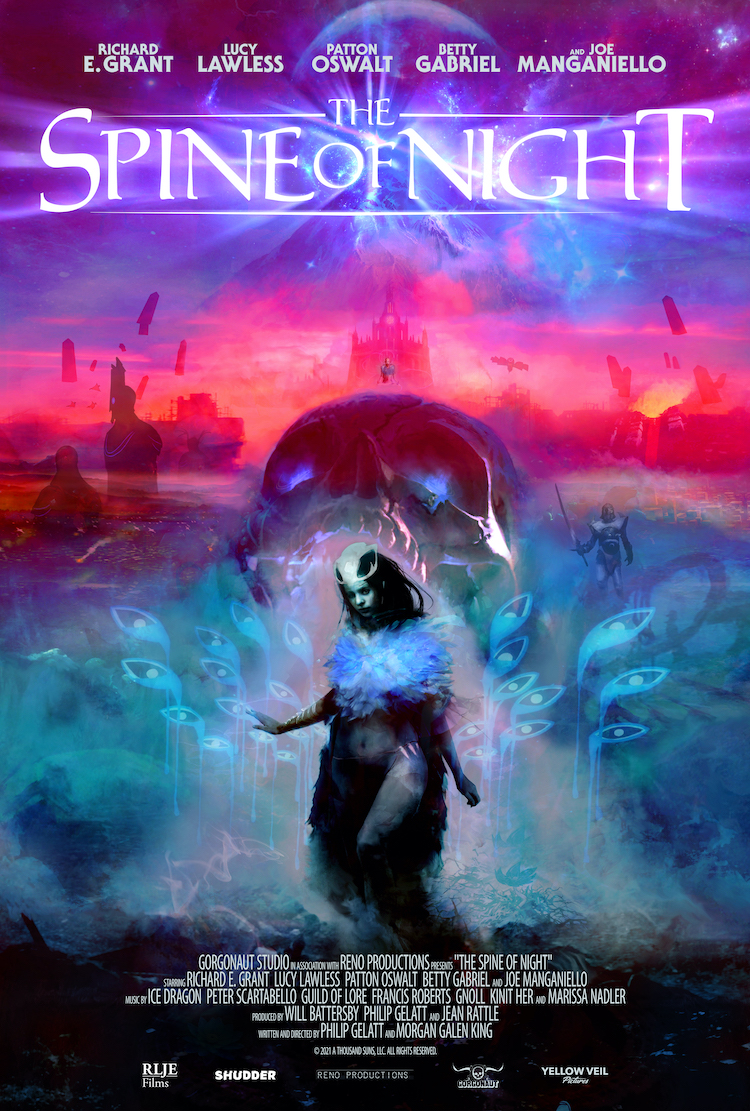