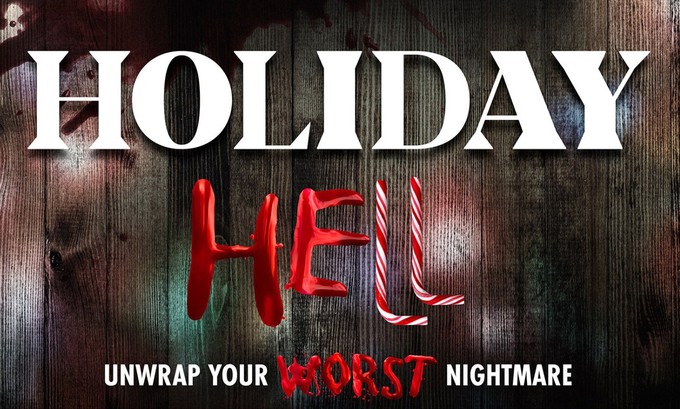 Welcome back horror geeks! Prometheus here, with a question. Have you ever felt that there just isn’t enough representation of the horror genre during the holiday season? Well, in the spirit of believing there can never be enough Christmas themed horror movies, I present to you… “Holiday Hell!” 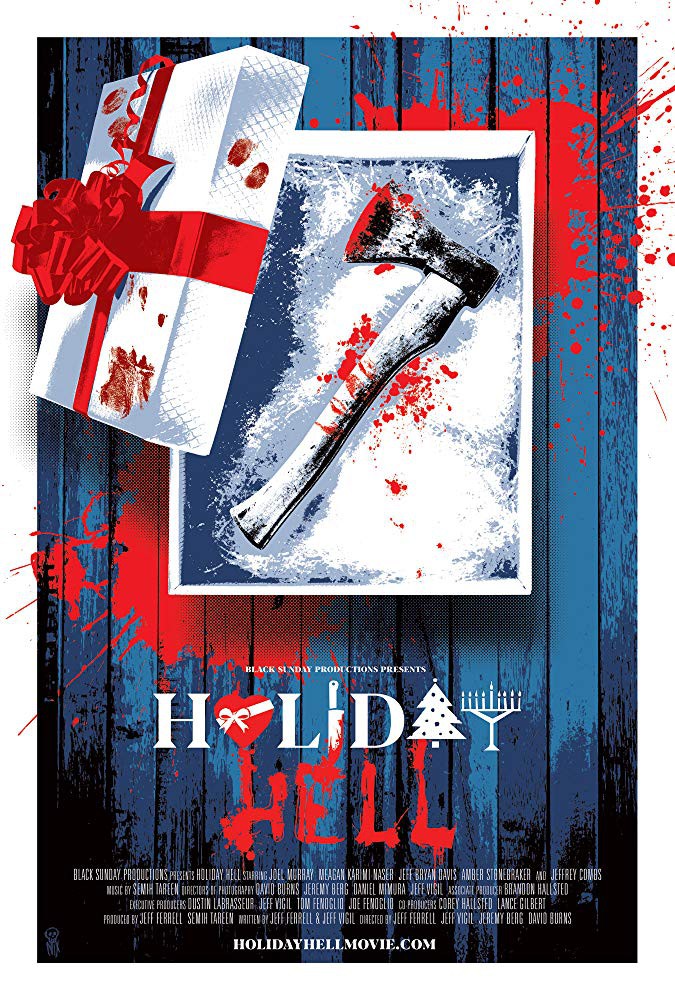 The film stars Jeffrey Combs, Joel Murray, and Jeff Bryan Davis, and was written and directed by Jeff Ferrell and Jeff Vigil. You can check out the full cast and crew credits here!

A woman (Meagan Karimi-Naser) seeking a last-minute Christmas gift for her sister wanders into a strange “specialty” shop. Each item in the shop has its own story and while browsing, the shopkeeper (Jeffrey Combs) narrates four different tales of terror.

I like anthologies, but they’re hit or miss. One thing I liked about “Holiday Hell”, is that it explains why you’re hearing these different stories. Each one ties to an item in the shop, whereas some anthology films just cram three or four (sometimes unrelated) stories down your throat with no rhyme or reason.

The stories are fun, short, and in many cases, outright silly. That doesn’t mean it's kid-friendly though! Don’t go twisting what I said and then yelling at me in the talkbacks… this is not a kid’s movie. It is, however, an enjoyable break from the normal holiday slog we’re subjected to around this time of year. I mean, if you're going to have to watch a holiday movie… might as well make it a horror! Am I right horror geeks? Plus, it packs a nice little twist at the end! 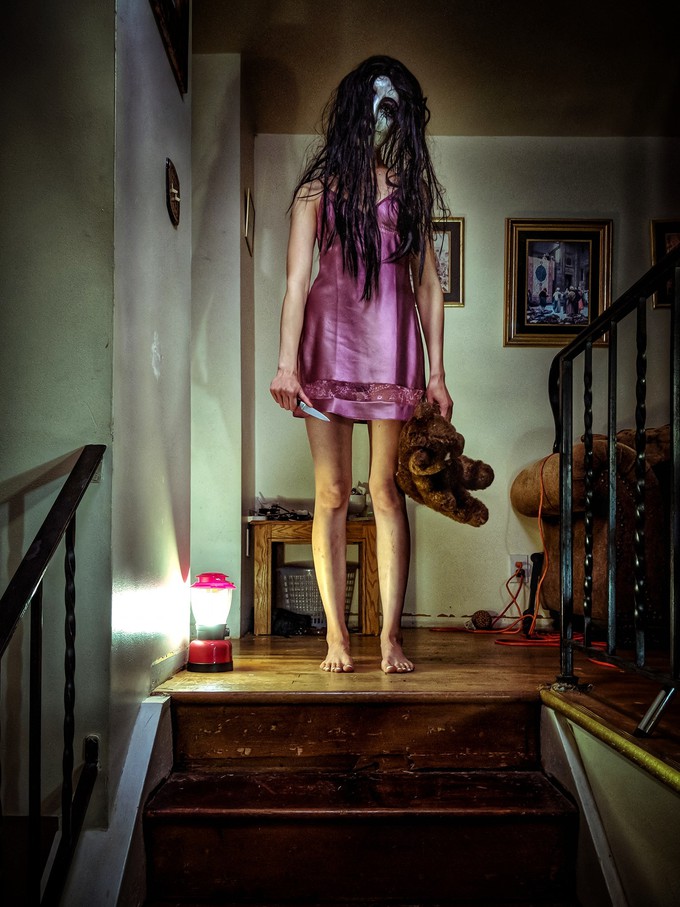 I had a chance to chat with the star of “Holiday Hell”, Jeffrey Combs recently! We had an awesome conversation about the film, the differences between movies and stage acting, and even video games! Jeffrey was great and you can check out our conversation and the trailer for the film below! 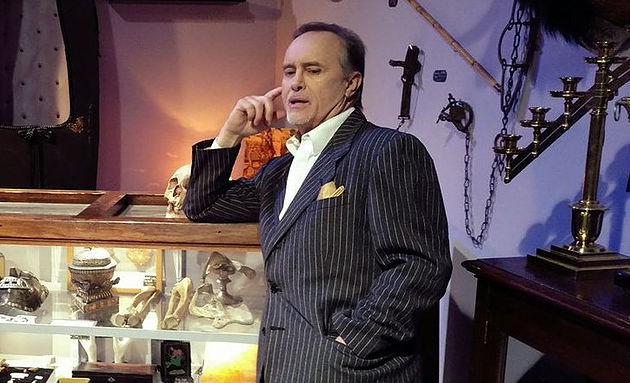 JC: Hi Josh, Jeff Combs. How are you man?

JS: Awesome, thank you for the phone call! So, you have a film coming out, “Holiday Hell?”

JS: Awesome, what can you tell us about it? Without spoilers, of course.

JC: Well, the premise is a woman comes to a curiosity shop, I’m the owner, the shopkeeper and everything I have in my shop has a story behind it. One of a kind sorts of things, and it’s a nice wrap around for a story. She’s looking for something for her sister, and it’s Christmas, Christmas-themed when she shows up. So, I show her around my shop, and she gets intrigued so I tell her the backstory. So, you go into that story and away we go. 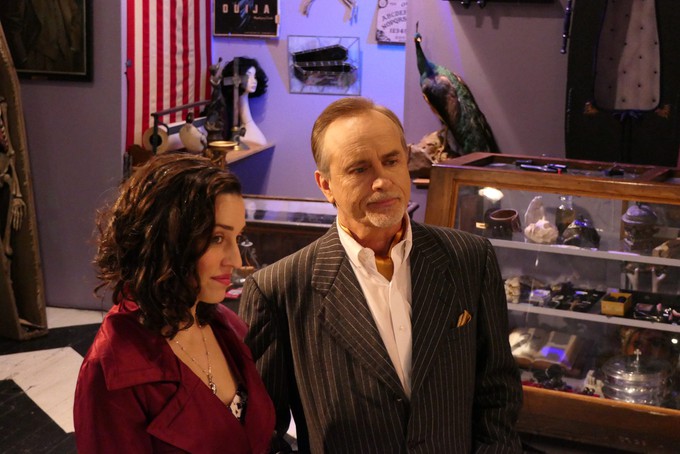 JS: As you mentioned, you play the shopkeeper. Most of your scenes are with Meagan Karimi-Naser, who plays Amelia. What was it like working together?

JC: She’s lovely, I’ve never met her before. I was really happy to do this because it was shot in Seattle.

JC: Yeah, it was shot in Seattle and many, many years ago I went to school there. I went to the University of Washington.

JC: I was happy to go back, see the old place and spend some time in the northwest. A bit of a homecoming mixed with a little bit of work.

JS: Right, right. How’d you get involved with the project?

JC: Jeff Farrell reached out to me. I didn’t know him, he just always liked my work and how it goes called my agent, sent the script and asked if I’d be interested in it. We said yes, sure.

JS: Awesome, what attracted you to the role?

JC: Well I liked the premise. A lot of anthologies don’t hold together, they don’t have a really good premise to tell all the different stories but I thought it was very clear and clean. There’s a backstory to every object in the shop. I sort of liked that.

JS: Yeah, I thought that was cool too. It gives us kind of an explanation of why you’re hearing different stories.

JS: So, you filmed your scenes in two nights?

JS: You did a great job. What did you do for inspiration?

JC: Well, I don’t know about inspiration. I just kind of went with my instinct. I had a good actress to work with; I liked the ending. Once I started talking with Jeff (Ferrell), I knew I was in good hands. Good guy, loves to work, enthusiastic. Wears a lot of hats writer, director, editor, producer so, one-man band. I wanted to support that; so, it was a nice package. I got to go back to my old haunt, hang out in Seattle a little bit and work on something. They were very nice to me and I only saw the movie just a couple of nights ago. Jeff sent me a copy.

JS: I was going to ask if you’ve had a chance to see it.

JC: Yeah, only just a couple days ago. I didn’t go to the premiere up there in Seattle. And I know that it’s going to be screened down here in LA, but I won’t be able to make it to that, so he said well before you do these interviews, why don’t you watch the movie? I want to thank you for doing everything you can for the movie, it’s a nice little sort of Christmas movie… kind of. (JS + JC laughing)

JC: It’s a dark Christmas movie; not all the stories are based on Christmas.

JS: Right, but it centers around her looking for a Christmas gift for her sister.

JC: Yeah, it’s the last-minute Christmas Eve, the premise is really a good one, I think.

JS: Without getting too spoilery, what was your favorite story?

JC: I really liked the Santa story; that was my favorite story.

JS: That’s funny, that was my favorite one, too! 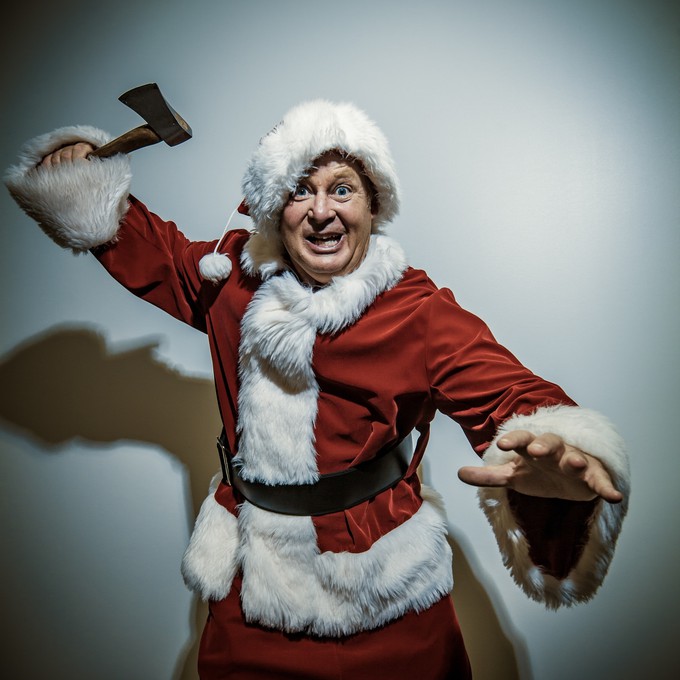 JC: I thought that actor (Joel Murray) was quite likeable; you cared about him. It was on the nose. I just really liked that premise; it was shot well. And I also liked the Rabbi doll; I thought that story was fun. 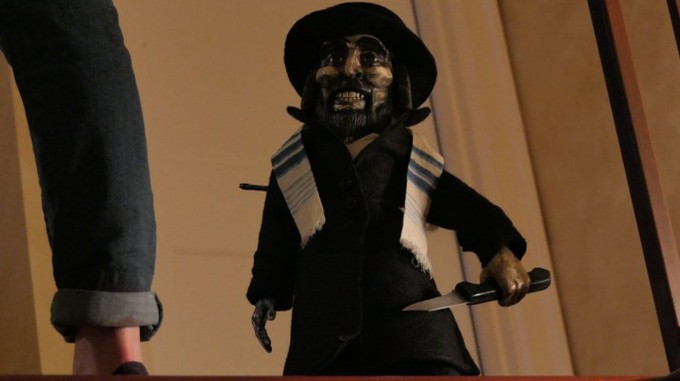 JS: That one brought me back to my childhood with “Trilogy of Terror.” You’ve been in so much. You have a hundred and thirty-seven actor credits on IMDB from movies, to television, cartoons, video games, you’ve done it all. What would you say you prefer – movies or tv?

JC: Well, movies and television are really very much the same. Dealing with the camera, lights, sets, waiting around and all of that. If it’s a really big budget movie; there’s a lot more time to do things but if it’s a lower budget movie you have to do things faster than even on T.V. You can’t just lump all movies into one category. There are different levels of how much time you have and you being ready when their ready, that’s the hardest part about being a film actor. You are ready and they actually won’t be ready for three hours; oh, wait five. I enjoy them both; it’s really hard to even discern one or the other. Every one of them has its own charm; its own curse you know what I mean? I’ve done a lot of theatre, and I like that too. I like that the actor is in control in theatre; it’s in our hands. Not waiting around for anyone to say “oh jeez I’m out of focus.”

JS: I like the theatre. You get that one shot; it’s a raw performance.

JC: That’s it. Between you and me; right now, it will never be like this again.

JC: I like that, it’s raw. It’s all been really good and I’m going to continue doing it.

JS: Now, you’ve been around the horror genre forever. "Re-Animator" is staple. In your opinion, where would Herbert West rank on the list of horror characters?

JC: I don’t think I’m the one to ask that. That answer would probably be in somebody else’s hands. I’m thrilled the Re-Animator has maintained a stature in the horror genre, I’m very proud of it. I think it’s a force of nature that holds up. It’s been a fan favorite for generations. It’s a little horror gem and I’m really proud to be a part of it. It really got me started, got me known for something and that can be a double-edged sword. On one hand it opened doors for me but on the other hand it, as an actor it was kind of like, “wait a minute, I’m not just a horror actor!” (JS+JC laughing.)

JS: Right. You get typecast.

JC: Right! I didn’t eat peanut butter sandwiches for all those years to be categorized, don’t do that. But that’s OK. I got my licks in, I have a variety of stuff. That’s what I’m happy about.

JS: You certainly have. You’ve been in a ton of stuff since I was a kid. I didn’t realize how many cartoons I watched that you were in.

JC: Yeah! I worked on more recently. It’s a nice other little skill set right there, that has a completely different kind of approach to things. You don’t have any of the things that helped you as an actor except your instinct and your voice. There are no props, there’s no wardrobe or anything that will help or inform you.

JS: Right, it’s just you and your voice. All your emotion has to come through in your voice.

JS: So, do you think doing video games is at all similar?

JS: I never really thought of that.

JC: Yeah, and then they go “OK, we’re all done except now we’ve got to do “efforts,” that’s what they call them. “Efforts,” and that’s like “grunt, OK, now medium grunt. Now, how about ‘ahh’, now land!” They’ve got to have a wide variety of stuff. So, it’s exciting but it can also be kind of taxing.”

JS: See, I play video games and I’m thinking, oh that must be a blast, but you don’t think of how much actual grunt work goes into it.

JS: If you could sum up “Holiday Hell” in one sentence, what would it be?

JC: Be careful what you wish for…

JS: Perfect. So, what’s next for you Jeff?

JS: OK, so we’ve got something from you though?

JS: I appreciate the phone call; it was a pleasure speaking to you!

JC: You, too. Thanks for helping out “Holiday Hell!” 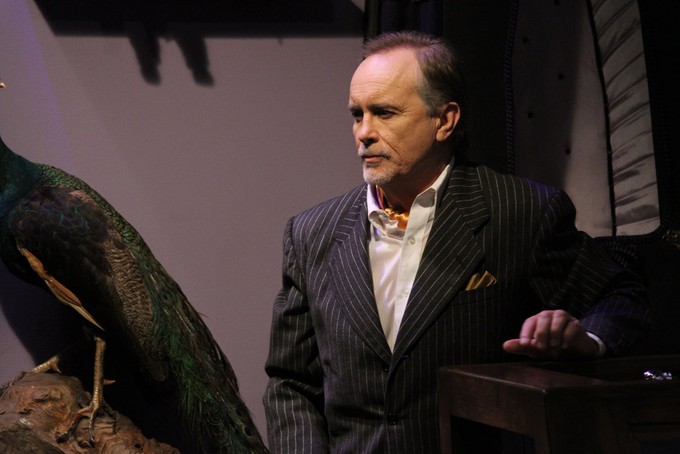 While speaking to Jeffrey, I also found out he’s a huge Edgar Allen Poe fan, like myself, and he does a one-man theatre show “Nevermore: An Evening with Edgar Allen Poe!” It was recently featured at the Sleepy Hollow International Film Festival! Be sure to keep an eye out for it if you’re a fan!

You can check out “Holiday Hell” on VOD November 1st! Maybe slide it in right between “A Christmas Story” and the millionth showing of “It’s a Wonderful Life!” Fight back against the endless troves of corny Christmas movies this season and add some campy horror!

That’s it for now folks but as always, comment below! Will you be adding “Holiday Hell” to the rotation this year? Let me know! Until next time, keep on geekin’ on, my friends!