Hey, friends.  Barbarella here.  APACHE JUNCTION came out Friday in theaters, on Digital, and on Demand.  First of all, I owe y'all a huge apology for not getting this posted this sooner; I was having some technical difficulties.  I know, so unprofessional!  I'm so sorry.  At any rate, the film about a journalist who heads to a notorious town stars Stuart Townsend, Trace Adkins, Thomas Jane, and Scout Taylor-Compton as the journalist.  I had the delightful experience of chatting with the latter about her costars, the wardrobe, and how she feels about promoting films. 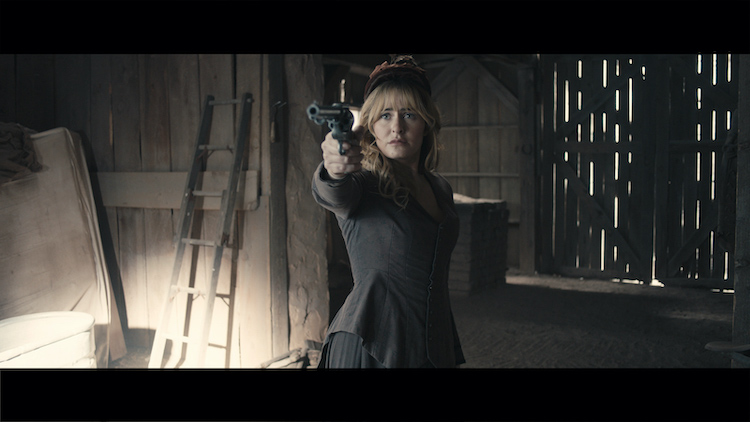 Do you find that promoting a film is more or less exhausting than actually performing in the film?

“Well, you should see me right now.  I've got three dogs on the couch.  I'm wearing my PJ’s.  I'm wearing a hat.  I have no makeup.  I'm literally on speaker phone with a paused program, so I feel pretty chill right now.  These kinds of interviews go by really fast because I feel like I actually enjoy them, and I like talking about my work.  I feel like if you don't like talking about what you did, then what's the point of doing it?

"But yeah, I feel like this is a little bit more chill than being on set, getting in costume, having a wardrobe person come to your trailer, tighten up the corset, put on the fifteen layers, the boots, and then get out of the trailer and then realize you have to go to the bathroom and then go back up and... yeah.  But it's also really fun.  You go to the makeup trailer; they've got Cardi B playing, and you're twerking in your western gear.  There’s a lot of ups and downs, but it's cool.”

Speaking of wardrobe, what was your favorite and least favorite part of Annabelle's wardrobe?

“Oh goodness.  Honestly, a lot of them were my favorites. I loved all the hats that I got to wear.  I think the first outfit probably was the worst one, but the prettiest.  It was definitely one of those outfits that needed to show that she was from the big city.  She's from San Francisco.  She had a lot of money.  She was way in over her head.  She didn't really know what she was stepping into, and we went to a costume house actually in Los Angeles, and this outfit just was so good, but it barely fit.

“Scout Compton, you cannot eat any churros or anything or else this is not going to close.  I think the downfall was we filmed for two weeks and then COVID shut us down.  Then we weren't able to film until six months after, so I was very scared for my quarantine eating habits if I was going to fit back into that dress.  Sure enough, it was very, very tight.  Having to be on a horse in something that's so tight was horrific.” 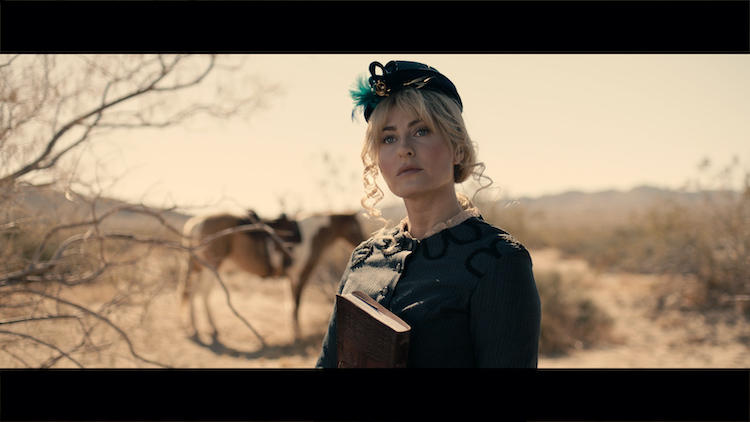 I liked her boots. Were they comfortable or did they hurt?

“Yes, the boots were actually really comfortable.  That was the one thing that I told the costume woman.  I was like, "I love you so much," because I was on horses all the time, and because the gravel was so uneven when I had to jump off the horse, or just running and all that stuff, I was like, "I need to make sure that these shoes are comfortable,” and they definitely were.”

What generally takes you longer: Getting your hair and makeup done before a scene, or actually getting ready at home before you go out?

“The set-world for sure.  I'm easy.  I'm a pony, no makeup; let's go.  I think my makeup artist Melanie, who is fortunate enough to work on a lot of these movies with me, who actually worked on APACHE JUNCTION with me, she likes to be very precise, so it takes a long time.  And also, I think women back in the day, they did their makeup, their hair, their hats, their gloves, and they just made sure they looked on point.  I feel like nowadays we're just like leggings, sure.  Hopefully it doesn't have a stain on it.  Let's go.”

What appealed to you the most about playing Annabelle?

“I think Annabelle's wit.  I think her courage and her bravery is what attracted me to the script.  It's this woman that is taking the reins, and she's trying to prove herself, and she's not afraid to do it, especially in this man's world, especially in this dark place, Apache Junction.  She's not afraid to step into this outlaw land and write this story and make a name for herself.  She's that woman that we all are, and we're dedicated to our career or field or whatever it is to make a name for ourselves, to prove ourselves.  I think that's what attracted me to her.  Yeah, maybe she's a little bit in over her head, but she's willing to do it.  The courage of that, I feel like, is what attracted me to the movie and to Annabelle.” 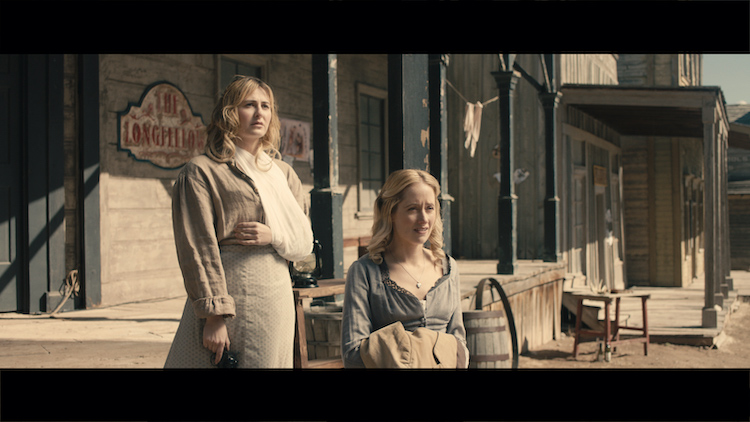 When researching for the role, did you learn about female journalists?  Were there any interesting stories or specific women that you came across?

“I didn't particularly look into that, but my director had told me a lot of that kind of stuff, what he based it off of, who she was off of, and that kind of world, but I didn't really get into that.  I feel like sometimes if I dive deep into a character like that, it takes me away from who I feel Annabelle is, then I'll base the character off of somebody else.  I didn't want to do that here.  It's kind of like the HALLOWEEN franchise that I'm known for playing Laurie Strode.  I didn't watch Jamie Lee Curtis, because I just didn't want that strong input to copycat, I guess.”

Between Stuart Townsend and Thomas Jane, who was more similar to his character and in what ways?

I think both of them are.  The part of Jericho that is Stuart is the playfulness in him.  It's that playfulness that he's hiding, but you know it's there.  It's that charm that comes in and out.  It's such a Stuart thing, but it's also a Jericho thing for sure, a hundred percent.  I feel like with Stuart, with Jericho in particular, I think Mary brings that out in him and Wasco, and I feel like Annabelle is starting to bring that out towards the end of the movie.  Thomas is so cool, calm, and collected.  I think that was like his character to a T.  I was like, "Whoa, you are this man."  He just has this suave confidence about him that I feel like was his character.  So, I think they both were very similar to their characters.” 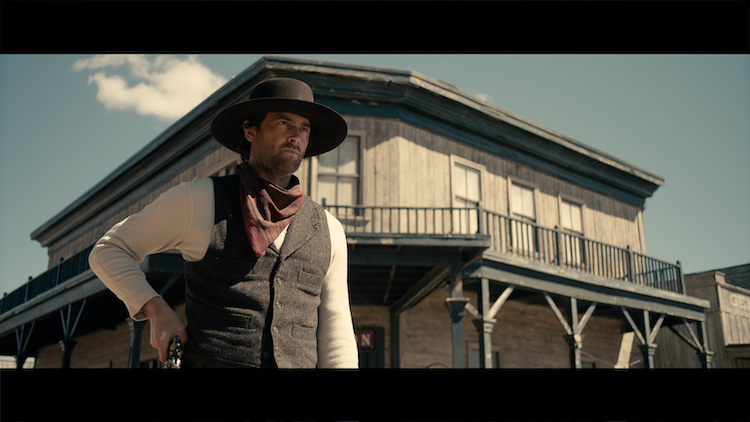 Before this, I never would have thought that Stuart Townsend would be such a great cowboy, but he is amazing. He's just perfect.

“I know, isn't that crazy?  I never would've thought that either.  It's so interesting.  When I first saw him in costume, I was like, "Oh yeah, that's really cool."   Then when I saw him on set, I was like, "Wow, you're a cowboy."  It was incredible to watch.”

The introduction to Trace Adkins' character, Captain Hensley is just so great.  What could you tell us about your experience working with him?

“Oh my gosh.  Well, I'm a big fan of Trace Adkins.  I grew up listening to his music, so just being in the presence of him was just... I think nothing gets me too quiet, and that was something that I needed to adjust to with being in the presence of Trace Adkins.  He's a big guy, a deep voice and very little words.  I was very nervous, but it was so cool to see him and work off of him.  I never would've thought, “Trace Adkins, oh, villain.”  Those two things just never would have mixed in my mind, but he nailed it.  And he's so professional and so unique to watch on set.  It was just such a good time.  My trailer was right next to his.  His wife was also in the movie, and she's just a doll.  Trace and Victoria both had their dog; I had my dog, so it was a lot of dog-playing times off of set.  It was just a fun time.” 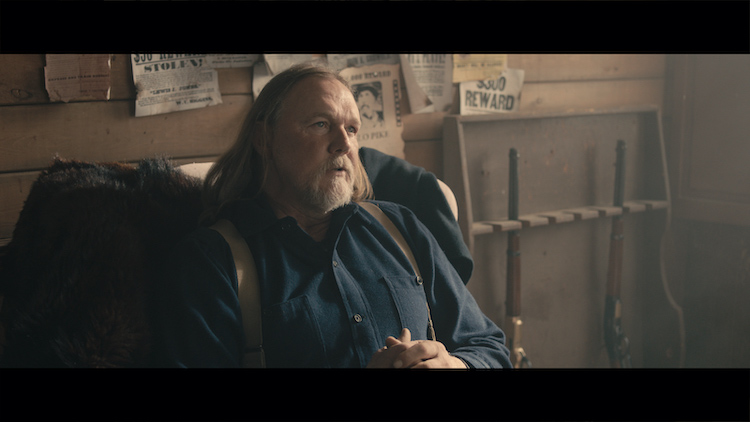 Were there any shenanigans that happened off set?

“Oh tons.  The first time we filmed, we were in Santa Fe, New Mexico.  I don't know if you've ever been.  It is so gorgeous, and it's small town, but they definitely knew that we were there.  I remember one night we all went to a bar and did some karaoke-ing.  It wasn't a karaoke bar, but we definitely did sing.  It was fun.  It was a good time.”

What songs did you do?

If you were in charge of a wild west saloon, what kind of rules would you have?

“Oh my God.  I'm really good at operating people, not my own stuff, but I'm very good.  I would be like Thomas Jane.  That'd be my bar, my rules.  I'd take care of the women, the customers; I'd take care of everything.  I'd get it in order.  It'd be a sharp running business for sure.” 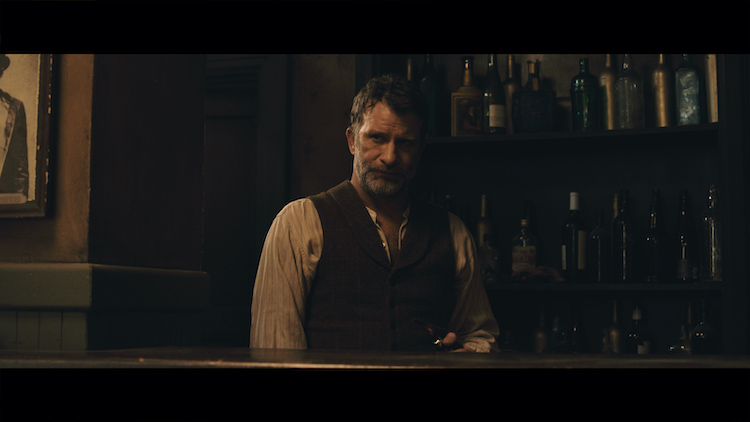 What qualities do you admire the most about director Justin Lee?

“Oh, I love Justin.  Justin was so sweet the first time I met him.  He came up to me, and he instantly said that he was a fan of mine, and that just was so awesome to hear as an actor.  Stepping into this role, it's nice when your director is a fan of yours and really likes your work.  There was definitely a trusting relationship between Justin and myself.  There's a lot of trust there, and Justin just let me play.  If he had some cool notes, he gets me, and we just play around with each other.  And he definitely knows he's a great writer as well.  So he's definitely very trusting in that as well.”

Was there a lot of collaboration?  Did you guys change up scenes a lot or no?

“Yeah, we would change every once in a while, just because when we would get on set, sometimes the sets didn't just really match up with what was going on.  But honestly it was to the script, because the script was so well-written that I feel like there was nothing that you really needed to mess around with.  The only thing was if the set just needed to make more sense with the scripts, but that was about it.” 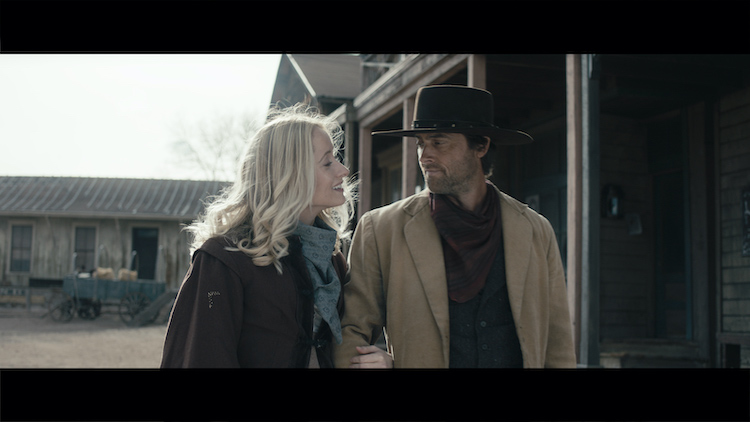 Would you ever want to live in the Old West?  Why or why not?

“I think it would be fun for a little bit, but then I think it would get old after a while, because I think we've come a long way from the West.  I feel maybe if I was a man, it'd be a little bit more fun.  But I think a woman in the West, I'd be stuck at home with the kids and with the pigs and stuff like that.  I don't know.  I feel like we've come a long way.  I feel like I definitely would like to stay here.”

Personally, I think I’d much rather experience the Old West through movies and television.  If you are interested in doing that, APACHE JUNCTION is available now in theaters, on Digital and on Demand.  Check it out then tell me if Stuart Townsend doesn’t blow your mind as a cowboy or Trace Adkins doesn’t have the best dialogue in the film.  I’ve added one of his zingers to my mental file for use at a future time should the set-up ever present itself because sometimes being snarky is fun.