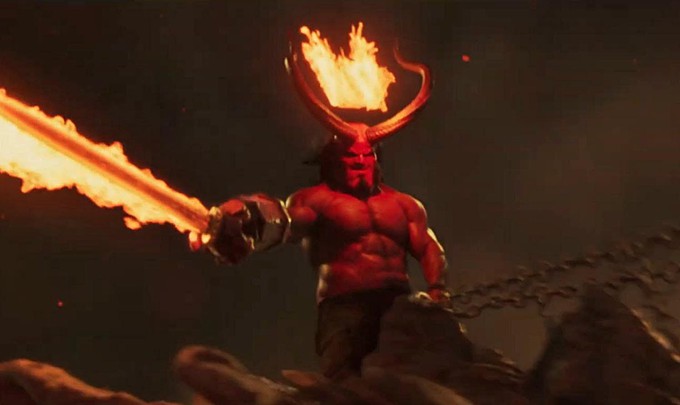 I definitely frown upon the depressingly widespread tendency of many film fans to assess or, maybe most accurately, grade a movie based on the participants’ personal lives or tastes, interviews, or the specific significance of the work. As beheld within the larger context of the filmmaker’s oeuvre as a whole; in short, based on anything other than the work itself. Yet in Hellboy’s (2019) case I honestly feel it is nigh impossible. Although my initial lines detail my perception of a film existing solely by itself, I’ll eventually delve deeper into the minutiae plaguing it (mostly derived from factors clearly outside the filmmaking process) and the admittedly subjective reasons that explain, in more detail, why I truly believe this endeavor was misbegotten from its very conception.

If you are a Neil Marshall aficionado, however, stop worrying and rest assured that his latest doesn´t go anywhere outside his usual comfort zone: it at all times strives for a no-nonsense approach that slaps you with a universe crammed full with snarky characters practically devoid of any empathy or warmth and action blocked and choreographed in a manner that manages to come off as constantly gritty and hard-hitting, aiming for more of that John Carpenter-on-steroids feel he went for with Doomsday. Since I am most definitely not an apologist of his, however, I have no qualms whatsoever to pronounce this latest adaptation of Mike Mignola’s life’s work a certified misfire.

From the top: Hellboy is a demon- he’s not supposed to look either cute or endearing. The chosen make-up design is not Hollywood-ugly but genuinely ugly. Hellboy comes complete with a hairy back and long strands of greasy, unkempt hair that you can almost swear reek of sweat, and having a protagonist who neither acts nor looks appealingly can become outright oppressive- it was for me-; the fact that it doesn´t even try to resemble Mignola’s original design is not even the point, right now.

The rest of the cast consists, mostly, of simple human-looking characters: Ian McShane (Professor Broom), Daniel Dae Kim (Major Daimio), and Sasha Lane (Alice), make up the core group tagging alongside David Harbour’s Hellboy, nothing in either their costumes or performances to even suggest they share a world inhabited by supernatural beings and occurrences; Sophie Okonedo (Lady Hatton), Thomas Haden Church (playing Lobster Johnson in a glorified cameo that hardly deserved billing) and Milla Jovovich (who, alongside Lane, emerge as the only completely unscathed players in this mess) complete the supporting cast adding at last a little of eerie mood with white contact lenses, a WWII era-pulp-superhero costume and varying degrees of detached limbs respectively. It is not that it is an obligation to endlessly hammer home reminders of whichever genre we are watching, for sure, but as much as this is a Marshall film, it is, as well, a Millenium Films release- notoriously so. And if you’ve watched an Avi Lerner production, you know what that entails: portrayals of New York City and just about any other place the script calls for with a curiously stable resemblance to each other and, ultimately, Prague or Bucharest and a production design that strives for utilitarianism at its basest form. Hellboy’s costume and hair designing are appropriate enough. The films set decoration, depending on the screenplay’s demands, covers the frame with libraries crammed full with antique tomes, posh dining rooms or dank catacombs. When the scarce occasions wherein something is supposed to take us back into a universe in which we follow the exploits of an actual red demon fighting ghouls and other such threats come along, they stick out sharply.

This is a low-budget endeavor, for sure (Box Office Mojo reports a budget of 50 million compared to the original’s 66 million in 2004 and its sequel’s 85 million four years later), and there is absolutely nothing wrong with pushing your line producer to the furthest extremes of creativity, but this begs the question: is Hellboy’s universe not to be tackled in the first place with limited resources (or, in the probable parlance of hip executives, is it an IP worth exploring?)? It depends on the people involved, I would think, but the point is, simply, that the penny-pinching here is way more apparent than in your standard Cage or Willis actioner.

Which, finally, leaves the very core of the film to salvage the whole package. Does it?

Simple answer would be no but, to be fair, this is the moment to actually address the conditions that surrounded this reboot from the very stages of pre-production: Mike Mignola, talking to Entertainment Weekly circa March 2018, stated: “The first film was based on one of the comics, but Del Toro was looking to reinvent everything. … (for the new version) the bulk of the (artist)[Duncan] Fegredo arc takes place in the real world. So instead of making up a whole fantasy world, it was, ‘Let’s find locations that feel like these real-world locales that Duncan drew in the comic.” Then, speaking to SYFY WIRE, on the premiere’s red carpet: “…it tips a little more in the horror direction…this thing delivers more than any of the others what you loved about the comics. It's different, but it has so many more specific nods to the comic, the comics fans should be really happy with this. For his part, Neil Marshall, in a June 2017 appearance in the Post Mortem podcast, said his team was granted “permission to do it R-rated, which for me is just like taking the cuffs off…It’s like, ‘Okay, so now we can just make the movie we want to make. Nobody’s going to stop us.’ So, that’s the main [difference].” 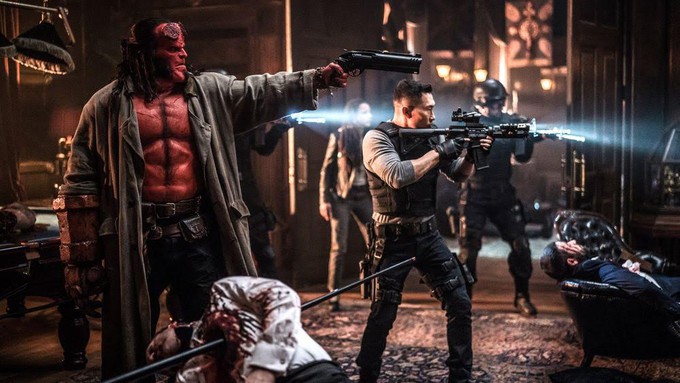 I’m not even going to go into detail (whatever is available) regarding the entire Charlotte Kirk debacle and the apparently undeniable toll it took on the production or the reports of producers interfering with creative choices every step of the way (there are fifteen producing credits listed on its IMDb page). “You don´t have to blow out anyone’s candle in order to make yours burn brighter.” Or something alike goes the saying, and this constant insistence on doing so by trying- hard- to distance themselves from Guillermo del Toro’s diptych. This ended up tainting their film’s eventual perception, forcing me to, just as constantly, keep comparing both efforts (which is even harder to avoid when the filmmakers not only ignore that, by this third iteration, we already know Hellboy’s origins. The film also has the gall to actually show it again- in not that dissimilar way to the original, to boot-, almost begging for someone to come up with a YouTube side-by-side essay pitting him against Del Toro’s rendition; in case this makes you curious, I’ll save you the trouble and assure you right now that Marshall’s version seems an extremely high-budgeted fan recreation.).

Mignola’s own awareness of their newfound aim towards grounded realism comes off- to me, for sure- as a preemptive defense against budget criticisms such as this one; his belief- if genuine- that faithfulness towards the source material alone will guarantee fans’ support is, in the best of cases, naïve. The “freedom” Marshall found in the R rating allowed him to make the movie he wanted to make and pepper all throughout it an overabundance of “Fucks”, sometimes justified, more often bluntly gratuitous. But, in the end, his Hellboy is most definitely not darker than Del Toro’s.

It is tone. Its stubborn reliance on soundtrack dissonance not only falls flat but actually pulls it farther away from the gimmick’s true purpose (say, Kubrick’s use of Beethoven’s Ninth Symphony) and ends up giving it an even more ludic sheen than Perlman’s outings ever wore. The neverending swearing is more adolescent than hard-hitting and the violence, although more grotesque in and of itself (there is considerably way more limb-chopping, for whatever that is worth), is visceral merely by reflex, never hitting in any real emotional manner. Which is disappointing in more ways than one since, up until now, that vague and elusive tonal goal had been Marshal’s forte, hands down (if in doubt, watch the oppressive nightmare he conjured up with The Descent or the loving salute to John Carpenter he crafted with Doomsday). 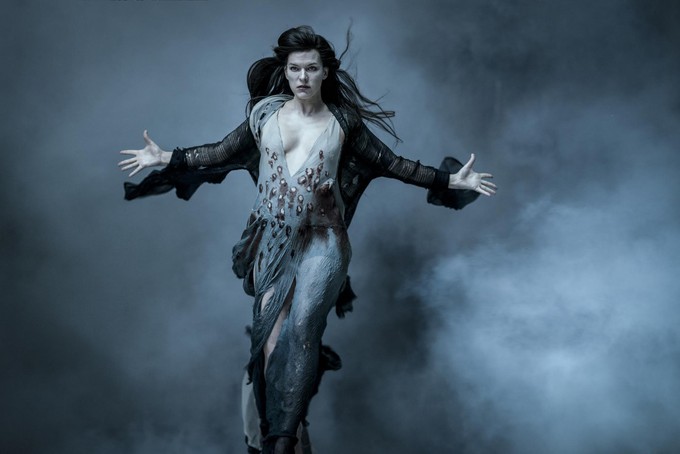 The one almost completely successfully satisfying departure from its predecessors comes when Jovovich’s Blood Queen quite literally unleashes Hell on Earth and a bevy of Lovecraftian nightmares- true blasphemies incarnate- roam London while eating, killing and dismembering in the most gruesome ways possible anyone upon whom they stumble. It is a blissfully inspired moment boosted by honestly unsettling creature-designs only hampered by its own brevity and lack of a proper budget- which comes to the fore when you realize, outside of the poorly CG-animated destruction of the London Bridge, all the action is confined to the same street.

Set in the real world or not, it is almost impossible not to notice the complete absence of, if not a visual feast, at the very least imagery potent enough to keep our eyes glued to the screen. Del Toro said, back around 2004, something along the lines of desiring to make the Lawrence of Arabia of monster movies with Hellboy- and it showed (if not in the final product, at least in loving intent). His Bureau for Paranormal Research and Defense, Troll Market and giant clockwork mechanism for the sequel’s climax are a production designer’s wet dream (Stephen Scott’s in both films), and the reverent cinematography by Guillermo Navarro lavishly portrays every gloriously mystical nook and cranny on sight. Marshal is not interested as much in bringing to life any particularly rewarding iconography and, instead, focuses on mayhem. He has always choreographed action satisfyingly, and Hellboy is no exception, but he seems so intent on making it his own- somewhat, somehow- that he relies on extreme camera angles and moves during CG brawls and deafening sound design to go along with the aforementioned ear-splitting soundtrack. And, inexplicably, a last attempt to make us “forget” all about the previous films comes in the after-credits stinger, when we are given the tantalizing promise of Abe Sapien to show up in the sequel.

Hellboy (2019) is a loud, annoying, confrontational and, worst of all, boring misguided piece of cinema that doesn´t manage to offer any reason whatsoever to explain its existence other than holding onto its film rights or- trying- to make money.