Holy Bat Shit Crazy with a greasy fried egg sammich!!! #BirdsOfPreyMovie was all that and a cute pooch to share a Twizzler with! 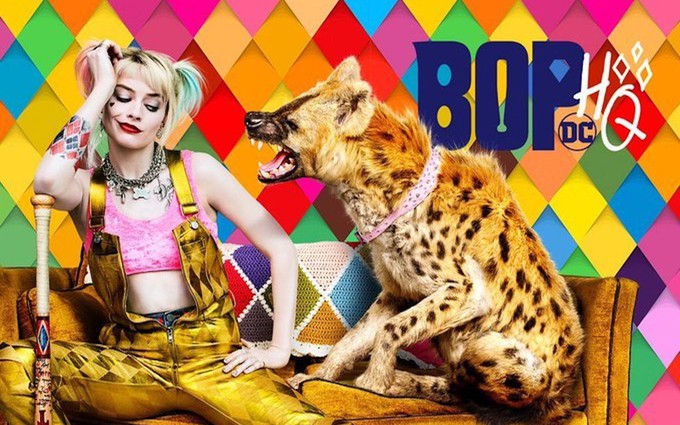 I have to tell ya, I went into this with the lowest of expectations.  I hated the trailers for it.  I didn’t like the costumes or the sets we were getting glimpses of.   And after JOKER, which I appreciated as an Actor’s journey into a TAXI DRIVER-esque descent into madness… which wouldn’t even qualify as an ingrown hair on the magnificent ass that was TAXI DRIVER.

Let me be frank. I fucking loathe REALISM in the DC Cinematic universe.   DC is MYTHOLOGY.   Magic & Powers & Wonder & Wow.   I don’t want to see CHICAGO as GOTHAM CITY, I don’t want to see NEW YORK as METROPOLIS.   I want Art Director created worlds based in some fashion after the visions we’ve seen since the DC Universe came about.

The only thing that I liked about what I saw in the trailers for BIRDS OF PREY: AND THE FANTABULOUS EMANCIPATION OF ONE HARLEY QUINN was Harley and her Hyena.   That, for me, is magic I want to see given more play.

Before seeing the film this Friday at 3:30pm in a theater that had on 4 other paying customers besides Dad and I, I had heard that the action was quite dynamic… but that people seemed to be enjoying it, so I shrugged off my pre-misgivings and was ready to see the film that made Paul Dini and Jimmy Palmiotti so damn delighted.

Taking FatherGeek, who was wearing his Neal Adams Joker pin on his hat & his Heath Leadger t-shirt under his button up, I was ready to see what director Cathy Yan had in store for us.  The only feature she had done before this was a Sundance Special Jury Prize Award winning debut: DEAD PIGS.   What I read about that film did not in anyway make me expect the film I saw.

Cathy Yan has constructed arguably one of the most kinetic comedic comic book romps we’ve ever seen. While folks are bringing up SUICIDE SQUAD as being BIRDS OF PREY progenitor, that is only technically true.   This film wasn’t written and directed by a guy doing LSD in the process.   This is a real movie.   More informed by THE RAID & THE RAID 2 than SUICIDE SQUAD. 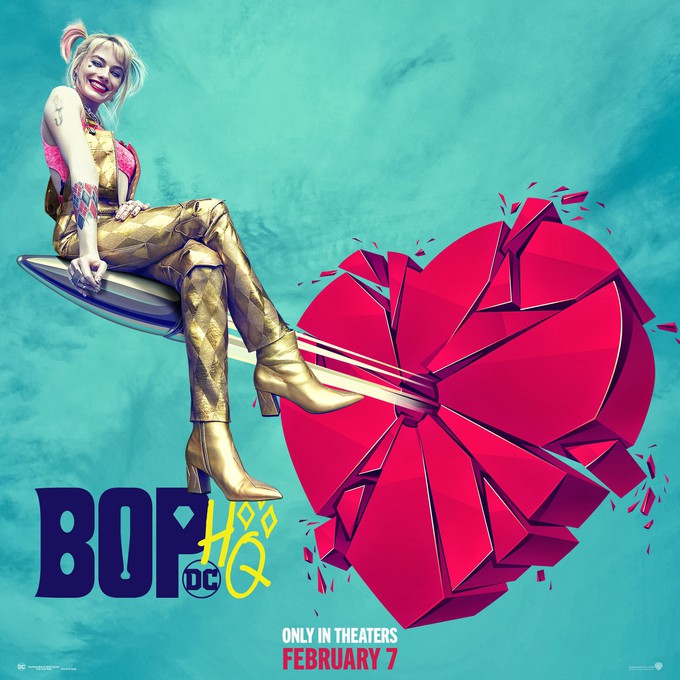 When HarleyQuinn struts into a Police Station hold on to your seats – and when you get to the BOOBY TRAP fun house – you’re in for something I wouldn’t dare to ruin for ya.

When I bring up Gareth Evans’ films, I want you to know that the action and the fights do not quite rise to the heights of those, yet unreachable mastery of kinetic fight action… but there’s a genius to the action here that comes from the JOHN WICK team of badass coordinators – and for my money…   Harley’s a broken catastrophic rampaging genius of mayhem. But more than that… she’s got Christina Hodson on her side…  The screenwriter behind Travis Knight’s delightful BUMBLEBEE… And she’s announced to be writing both THE FLASH and BATGIRL – which boons well for both.

This film is HARLEY QUINN’s story – and Warner Brothers was fuck all stupid to not call it HARLEY QUINN… relegating that name as fart after a Colon in the title is just DUMB DUM DUMMB DUMMMMMMB DUMMMMBBBBBB.   You don’t bury your lead.

Margot Robbie’s HARLEY QUINN is the most charismatic character since Christopher Reeve’s SUPERMAN.   She’s irrepressible and indeed MAD as a puppy begging for a treat.   She’s deceptively brilliant, but more than that…  Someone is looking out after her.   Not on screen, but behind the screen.   She does actions that would make no logical sense, but the results play out like a mad genius Rube Goldberg as Jazz concoction.   Harley has a mess of action that just is beyond awesome because it comes out of left field.   She doesn’t wait to be involved in action, she’s an unseen fuse that just ignites and everybody else is shocked into being destroyed by her.   And she’s having so much fun doing it…  it is infectious as all Hell.

My next favorite character in the film is Rosie Perez’s Renee Montoya – but even as Montoya is doing her badass 80’s Cop stuff…  her tale is narrated by Harley, who is the storyteller behind this mad tale I love so.   I don’t think I’ve ever seen Rosie Perez in any role like this – and she’s great – kinda just like she was in PINEAPPLE EXPRESS.   Here she gets a bit more to play with though. 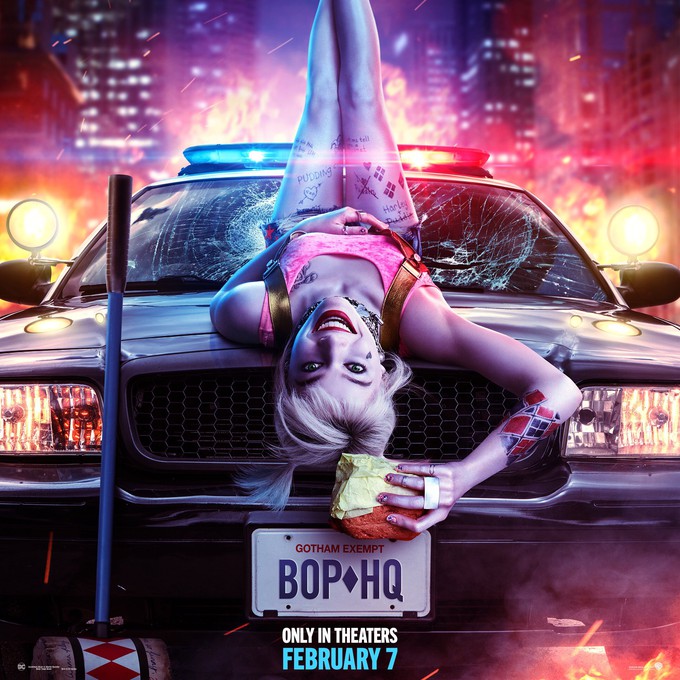 Ella Jay Basco plays a character named Cassandra Cain, but not at all like the character from the comics.   Here she can talk, she’s Vietnamese with a broken forearm in a cast and a quite talented pickpocket that picks the wrong pocket and sets the entire insanity into overdrive.   I love her character and in particular I love what she brings out of Harley.

Next – the team of Ewan McGregor and Chris Messina as Roman Sionis (Black Mask) and Victor Zsasz… I love everything about how these two operate.   The delicious nature of their sadism and psychotic tendencies.   There’s nothing admirable about their actions, as if these things were done in reality – they’d be more repugnant than just about any violent crime we’ve yet seen.   However, there’s an affection for Ewan’s Sionis by Messina’s Zsasz – something I think is never overplayed, but you definitely feel it.   I also love Sionis’ mask collection and just his wanton insecurity that sends him into a fury.

Now – where I think things could improve.

COSTUMES…  I love Mary Elizabeth Winstead as much as all that have loved her work, but I really wanted THE HUNTRESS as THE HUNTRESS, not as Mary Elizabeth Winstead mask & costume free with a mini-crossbow.  It undercuts her character.   And Jurnee Smollett-Bell’s Dinah Lance aka BLACK CANARY 2…   I just want these comic characters to be the characters they purport to be.   We do get to see Dinah let loose – but only once, and there’s many times where she could’ve unleashed, including when they first see the army they have to face.

With DC movies, I want the characters to do the things the characters are known for.  AQUAMAN & WONDER WOMAN got this right.  I know some didn’t dig AQUAMAN so much, but they’re wrong.   That is exactly what AQUAMAN needed to be, especially with the Julie Andrews voiced Kaiju.   And when I see WONDER WOMAN lassoing Lightning and swinging through storm clouds – it makes my heart soar.   That’s unleashing the characters. 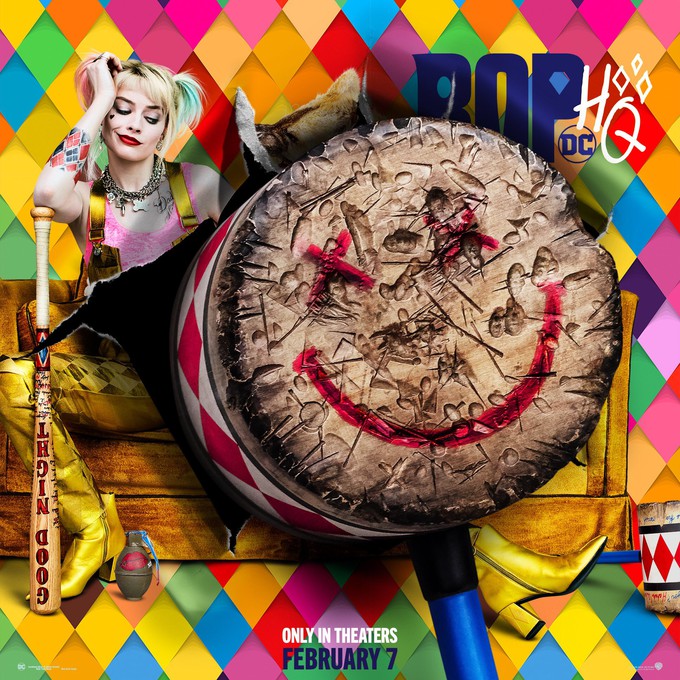 I forgive the shortcomings of these characters cuz it is still early in their “stories” and this is Harley’s tale first and foremost.   However, there’s a bit of something that just really fricking annoys me.

This is Gotham City. There’s a whole lotta crime going on and no Batman, no Robin, no Nightwing or Batgirl.   All I would have needed was a news report on TV that covered something that was going on elsewhere.   I know that BATMAN can’t be everywhere & I’m fine with that, but just a little something to keep the mind from wandering would’ve been nice.   Like if this story was going on during JUSTICE LEAGUE - I could see crime in Gotham going happy go lucky cuz the Dark Knight was off reservation.  However, they do nothing like that.

Speaking of GOTHAM CITY – I liked it’s portrayal here.   This was the most COMIC looking GC has looked  - well, I guess since that little bit in Justice League, but before that…  since the Burton films.   I never liked Nolan’s GOTHAM – but here there’s several locations that really got me giddy, none more than the old Amusement Park – which is the sequence of the film that just really delivers on pretty much all levels..

I know many that are saving this film for Valentine’s Day – and it’s going to delight a lot of you that choose to see it.  Margot’s Harley is perfection.   Though I would kill to see her doing all of this in the Animated Series costume.   I would also have loved Commissioner Gordon involved – and possibly Batgirl.

The trailers for this made it look like a mess – but what they never really captured was the way this is thoroughly Harley’s tale.  Selling it with the initials BOP?  Or even with the title BIRDS OF PREY – which just isn’t nearly as well known as the chaps at DC would like to think.

DC is working on the costs for their films – making the films less Comic Book isn’t the route to go.   Sure, it worked for JOKER, but that’s the JOKER – he’s a villain so great that even when you water him down to a melancholy sad sack loser mental patient and give him a single moment of JOKER-ness – he can pull in a BILLION DOLLARS world wide. 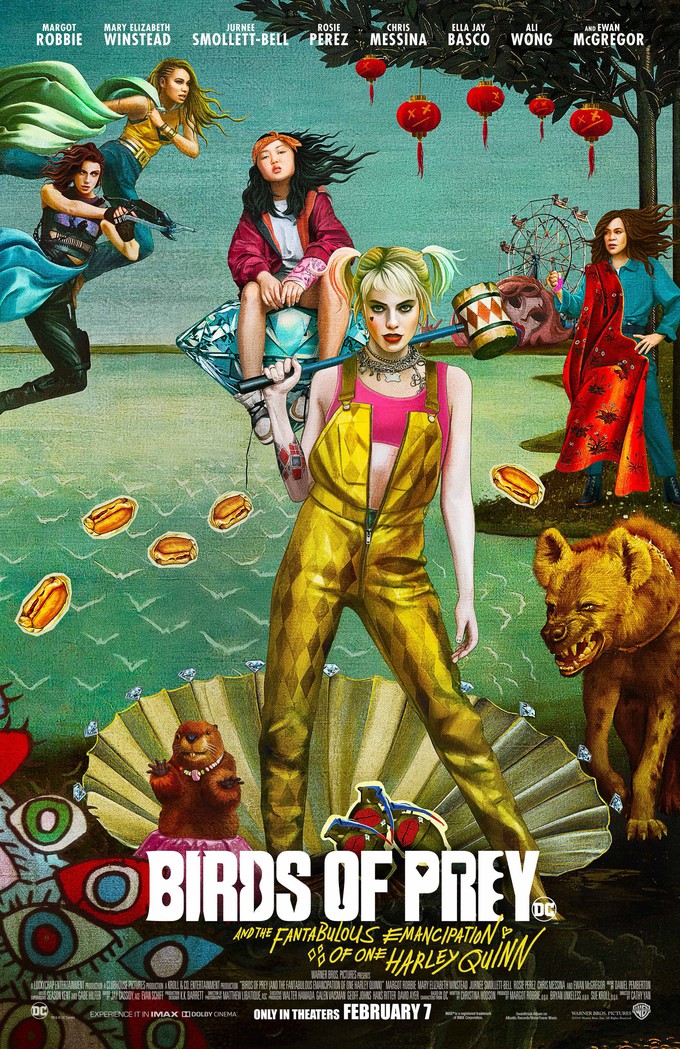 However, as a life long lover of the JOKER – I’ve watched that film 3 times thus far – and that compares to double digits on all the other DC films – including many of the animated films.   It just pales compared to the character I love.

HARLEY QUINN deserved the title to this film – and frankly, she’s all you really needed to sell.   That said, doing the foul mouthed animated show on DC UNIVERSE probably kept a whole lot of families scared of taking their kids to this.

BIRDS OF PREY: AND THE FANTABULOUS EMANCIPATION OF ONE HARLEY QUINN fails miserably as a title. Especially in the TWITTER age of truncating titles to #BOP.   Again – I saw this with an audience of 6 total, so that’s how well it sold.   Think about how they sold JOKER…   they put Joaquin on them stairs in full JOKER attire and make up – and it suckered the larger audience in.   You put Margot Robbie in THE HARLEY QUINN costume tearing through that JOKER poster or spray painting CREEP on it – and I believe you’d have a totally different box office story. 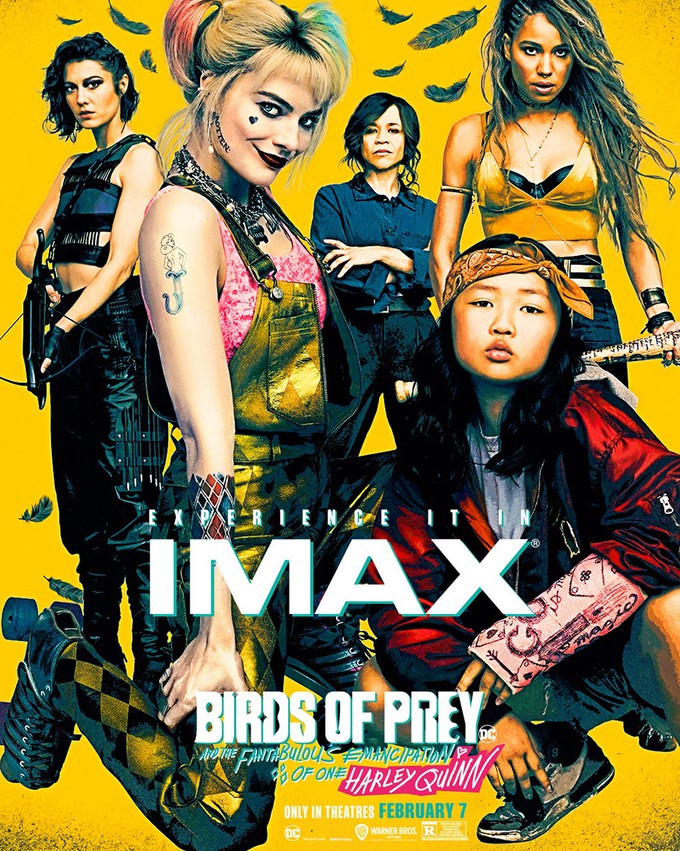 I can’t wait to see what James Gunn gives us with his SUICIDE SQUAD reboot…  This will gain in prestige as time goes on, but people need to be fired over the title and marketing of the film.  They did a very bad job.

Now if you love Harley, get your ass to the theater, cuz she’s kicking a whole lotta ass – and she’ll remind you of Jackie Chan in the most delightful ways.   Man I was expecting to hate this – and instead, I can’t wait to see Cathy Yan’s DEAD PIGS and whatever she does next.

Part of what makes this film work is Matthew Libatique’s cinematography – I’ve loved his work since Darren Aronofsky’s PI and REQUIEM FOR A DREAM.   It gives such life to this film.  Can’t wait to see repeatedly! 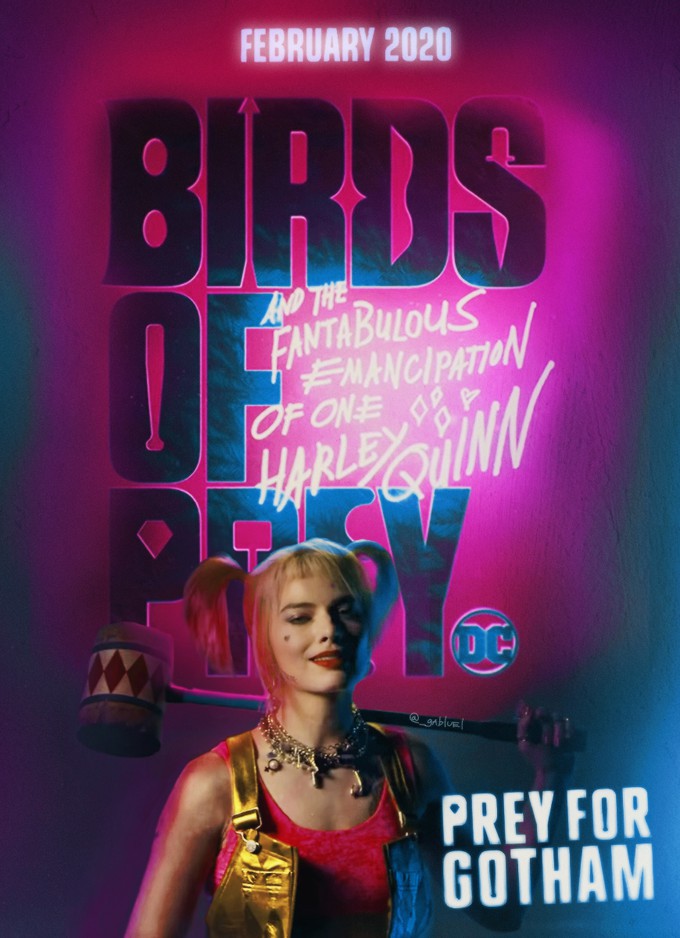