Guy Pearce and Devon Sawa misfire in DISTURBING THE PEACE

Howdy, y’all! McEric here with a fresh review of a new film hitting theaters, Video on Demand, and Digital this Friday, January 17th called DISTURBING THE PEACE. Released by Momentum Pictures, the film stars Guy Pearce as a small-town marshal facing off against Devon Sawa as Diablo and his gang of biker criminals.

I’ve been looking forward to this film ever since Devon Sawa mentioned it to me during our interview for THE FANATIC, as both he and I are huge Guy Pearce fans. After first catching my attention in L.A. CONFIDENTIAL, Pearce continued to turn out challenging work, cementing his status as an actor of merit with turns in Nolan’s MEMENTO and in the Nick Cave-penned Outback Western THE PROPOSITION. Despite THE FANATIC’s critical reception, I thought Sawa’s portrayal was sincere and daring, so I genuinely anticipated seeing these two work together on a taut thriller.

Sadly, that is not what this is. DISTURBING THE PEACE is conceited, lazy, slow, and burdened by bad acting and poor choices all around. To be fair, Sawa is decent in his role as the lead antagonist, and Pearce does well with what he is given, which isn’t much, but their performances alone are not enough to save this film.

For starters, there’s the synopsis: A small-town marshal who hasn't carried a gun since he left the Texas Rangers after a tragic shooting must pick up his gun again. This time to do battle with a gang of outlaw bikers that has invaded the town to pull off a brazen and violent heist.

All well and good until you pair it with the film’s poster: 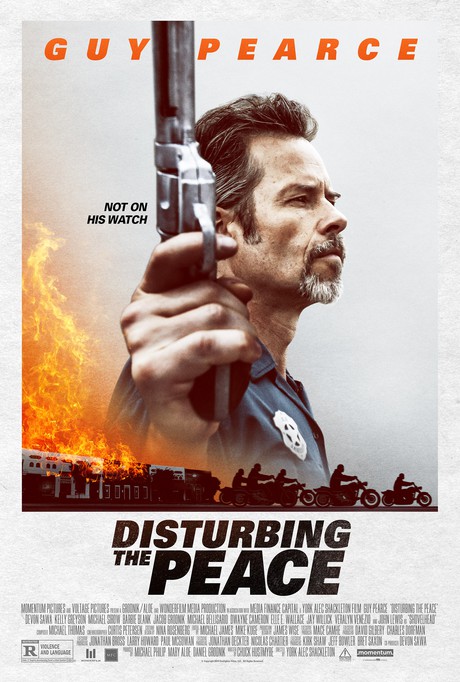 “Look ye upon my gun and despair”

The film opens with “the tragic shooting”, shown to the viewer in vignette, then explicitly explained in exposition by Pearce’s Jim Dillon in the very next scene to his curious deputy. So the rule is now no longer “Show; don’t tell” but rather “Show, then tell”? Got it.

The film jumps into the story right away, however, as two bikers roll loudly into town, arousing suspicion from all the simple folk. From there, we get some very bad acting, forced exposition, and terrifically clumsy fight choreography in the first fifteen minutes, just as a taste of what we will have in store as viewers if Pearce or Sawa are not on the screen at any given moment.

A curious find is Jacob Grodnik as Jarhead, returning in another Daniel Grodnik production. I don’t want to cry nepotism here, and his performance is one of the stand-outs of the film, but seeing him in this so shortly after seeing him as street magician Todd the God in THE FANATIC really sort of took me out of the film. In this particular case, though, it was much appreciated. Please take me out of this film.

This film- you know what? I have to stop saying that. I have to stop calling this a “film”. In fact, while on Google doing research on any one of the three lead blonde actresses who all look and act the same, I kept getting results for a documentary in 2016 called DISTURBING THE PEACE when I typed “film”. If you type “DISTURBING THE PEACE movie” it’ll take you right to this title. So let’s go with that. 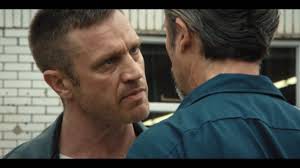 This movie fails so spectacularly on so many levels. Reading the biography of the director, York Alec Shackleton (who is actually a descendent of the explorer), I was expecting something more. Better pacing, better framing, more of an eye for action or tension, but there is none of that in this fil- movie. The “hero” spends much of the movie being horribly ineffective; rigging a MacGyver-style explosive to take out one villain while they execute two of his constituents; laboriously hotwiring a pickup truck while the villains murder an armored truck guard. He is away from the action so frequently you’re left to wonder if he was supposed to be there that particular day. Think more Sergeant Powell than John McClane.

And, SPOILER ALERT (from the poster), he does pick up the gun, though the catalyst seems non-existent. The first opportunity he has to use a firearm he discards it, leaving us to think it has to be some cataclysmic moment to spur him back to the devil’s boomstick, but moments later he’s sauntered away from the clamor and peril to have a quiet, ceremonious moment in his living room with his old revolver and Texas Marshal’s badge. Yeah, take your time, Jim. They’re probably not really going to blow that church up with all that gasoline and everyone inside. Take your moment; you’ve earned it.

You might note in the trailer that there’s a moment when Jim mounts a horse and chases an assailant down with a rifle. Well, technically that happens in the movie, but there is zero tension whatsoever. The movie ends on a very shiny scene that is a stylistic mistake to truly drive the final nail in this coffin of a thrill-dud. 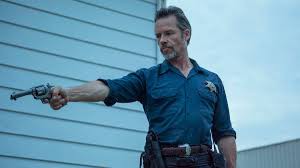 I wish I could say nice things about this movie but it is full of clichés (really? The bad guys are a motorcycle gang?), bad acting (all of the supporting female roles are held by wrestlers or wrestling announcers or personalities from reality shows about trying to be a wrestler), slow pacing, bad decisions, and the slowest end title credit crawl I’ve ever seen in the history of cinema. Seriously. Why? Was it to reach the ninety minute mark? I don’t care.

If you want to support Guy Pearce or Devon Sawa (who’s a super nice dude), or the Grodniks, or their go-to screenwriter Chuck Hustmyer, by all means check out DISTURBING THE PEACE. As it is, I think the film will exist as a Netflix-and-chill type feature; one you can start with your friend in the room and they’ll be so uninterested in the movie on screen that even you will look more interesting by comparison, and a much more fun thing to do than finish this slow annoying ode to corn syrup.

DISTURBING THE PEACE is released to select theaters, Video on Demand, and Digital this Friday, January 17th, 2020.

Until next time, I’ll see you at the movies, but not this one.