GROUPERS Swims In a New School of Groundbreaking Independent Film

So there I was, drinking whiskey and live-tweeting ROBOCOP 2, putting off screening a few more horror films, when I got an email asking if I wanted to review a dark comedy called GROUPERS. The synopsis looked like this:

The film centers around two all-American high school jocks Brad and Dylan (Peter Mayer-Klepchick and Cameron Duckett) who are out for a night on the town when they are approached by the beautiful and seductive Meg (Nicole Dambro) at a local bar.  Ready for what they hope will be a night to remember, the guys are subsequently kidnapped, drugged and awaken tied up face to face in an abandoned pool in the middle of nowhere. Absurdity and insanity ensue as we learn that Orin (Jesse Pudles), Meg’s overly flamboyant brother has been the target of Brad and Dylan’s homophobic bullying and that Meg is actually a grad student who plans to perform a psychological and somewhat sadistic experiment on them as part of her thesis, which poses the question, “is homosexuality a choice”. 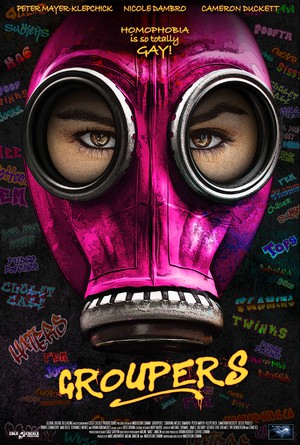 Color me intrigued, but I wasn’t fully sold. The story seemed… small. I went in a skeptic, but come out happy I’d viewed the film and eager to discuss it with others who have viewed it. And that’s the problem:

I don’t want to spoil it for you. And I’m not going to. This is a spoiler-free review. Because I want you to see this movie.

The film opens on Brad and Dylan doing what young white men call “dancing” on Meg, who debuffs them and leads them to her white van parked outside. She opens the back of the van and THE IDIOTS GET IN THE BACK OF THE VAN! (Dudes can’t hold their liquor.) We’re treated to a character card for Meg and she leads us to the boys tied up in the deep end of an empty, graffitied pool, facing one another. They scream for help, and to mock them, so does she.

“No one here but us chickens,” she tells the boys, and the film is off to the races. What develops over the next 110 minutes widens the lens of our story past the three initial leads, a world coming into focus of memorable characters and unique twists. To say more would be to say too much, but writer/director Anderson Cowan’s debut feature is an achievement to be celebrated, soon to take its place alongside the cult hits of independent film. It’s intelligent, but not through its imitation of academia, while also surprisingly human via its cartoonish characters. It’s genuinely funny, skillfully shot, and brilliantly realized. The audience is allowed to discover the full story along with the characters onscreen in a rare effective instance of mimesis.

The last line of the film is tremendously satisfying, as well. 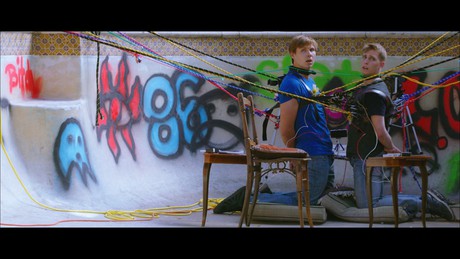 GROUPERS opens in theaters in Los Angeles on September 27th, then spreads to every other major city on October 1st. Check it out!

See y’all at the movies!