Hey, friends.  Barbarella here.  As a kid, Easter egg hunts were a thing we did, and finding those colorful plastic ovals tucked away was a fun way to spend some time.  GHOSTBUSTERS: AFTERLIFE practically hurls its Easter eggs at you, so even if you don’t do any hunting, you’ll still come away with a full basket.  Beyond Easter eggs, the music and the choice to set this story in rural Oklahoma also serve to strike up a strong sense of nostalgia, which proves successful in a lot of ways, although it sometimes makes the story feel overly familiar.  Luckily, the new characters and fresh content generate enough amusement to make up for that.

When single mom Callie (Carrie Coon) and her two kids, Phoebe (McKenna Grace) and Trevor (Finn Wolfhard), move to a small town, they discover a connection to the Ghostbusters from decades past.

While offering new characters and a different premise, from a tonal sense, it feels incredibly similar to the 1984 film.  In fact, the setting takes us largely out of time, allowing us to imagine we are back in the 80’s, with only a character named Podcast (Logan Kim) reminding us that the film occurs much more recently.

While I appreciate the waves of nostalgia flowing through me as I watch, I think AFTERLIFE struggles a bit to find the correct balance of past and present.  The film favors rehashing the past over providing original ghosts and scenarios.   We’ve seen most of these ghosts before, and we know what our characters must do to combat them, creating a certain amount of predictability.  Minor changes shake things up a bit, but at times, it’s just way too familiar. 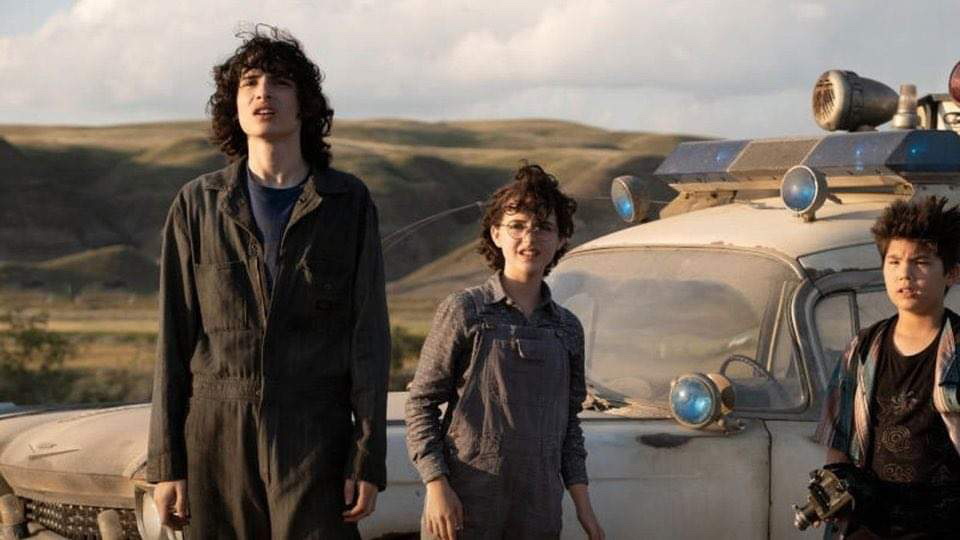 What’s not familiar are the new characters, and I adore them.  Science teacher Mr. Grooberman (Paul Rudd) proves that a teacher doesn’t have to be as inspiring as Mr. Keating (DEAD POETS SOCIETY) or as stern as Mr. Hand (FAST TIMES AT RIDGEMONT HIGH) to rise to the ranks of my favorite cinematic teachers.  In fact, of the three, he most accurately resembles an actual teacher I’ve had.

I also find Podcast’s unbridled excitement somewhat contagious, and I can’t help but feel a little giddy watching him experience the events as they transpire.  Sadly, both Lucky (Celeste O’Connor) and her dad, played by Bokeem Woodbine, are underdeveloped and underutilized, not to the extent that Donnie Yen was underutilized in ROGUE ONE, but still underutilized.

While there are also some recognizable faces from the original in Jason Reitman and Gil Kenan’s film, one should not expect a whole lot of screen time from them.  They are merely supporting characters, with the real spotlight on single mom Callie and her kids.

Finn Wolfhard and McKenna Grace, as Trevor and Phoebe, respectively, shine brightly in this movie, particularly McKenna Grace.  Both have their quirks and offer some entertaining and humorous moments throughout.  Some may find the humor a bit on the cheesy side, but I happen to love cheesy humor, in the right amount, so I laugh a lot, even at Phoebe’s nerdy jokes.  Speaking of Phoebe, not only does McKenna Grace play the socially awkward role with aplomb, but she also sings one of the closing credit songs “Haunted House” beautifully.

Speaking of credits, the film bestows both mid-credit and after-credit scenes to those who stay for them.  They’re worth checking out.

Overall, I find GHOSTBUSTERS: AFTERLIFE mostly charming, amusing, and fun.  I do think it somewhat weird that my general takeaway from a film with “ghost” in the title is that I love the new quirky characters, but I find the ghosts largely uninspired.