Get to Know WILDCAT'S Georgina Campbell

Hey friends!  Barbarella here.  The talented Georgina Campbell (“Broadchurch,” “Black Mirror”) stars in WILDCAT which comes out this Friday in theaters. She plays Khadija, an ambitious reporter taken captive in the Middle East by a militant group convinced she has critical information.  Generally, a lot of these interviews are geared to get more information about the current project, but anything I wanted to know about WILDCAT would just mean a lot of spoilers for our readers, and as someone who hates spoilers, I couldn’t do that to you.   Instead, I barraged her with questions geared more towards getting to know her.  I gotta say that I had a lot of fun with this one; Georgina is absolutely delightful.

Your character experiences some pain, so I'd like to know what's the worst, most painful injury that you've ever experienced, and how did that happen?

“Oh, my goodness. The worst?  You know what.  I've never broken a leg or anything like that. The only time I've been in hospital is I had my appendix removed and having appendicitis was pretty painful. So yeah, that's probably the most pain.”

This next question is going to seem a little weird, but I did a short film a while back where we had an actor handcuffed. I'm curious to hear how other film sets handle that kind of thing, so my question is while filming WILDCAT, what was the longest duration you went being handcuffed to the bed?

“Yeah, I can't really remember how long. They were pretty good at coming in and taking the handcuffs off immediately after we finished filming. There was a couple of times when we forgot to put them on actually, and then realized halfway through a scene that I'm not handcuffed to the bed. We had some really long scenes where you're having her wear the handcuffs for the whole thing.” 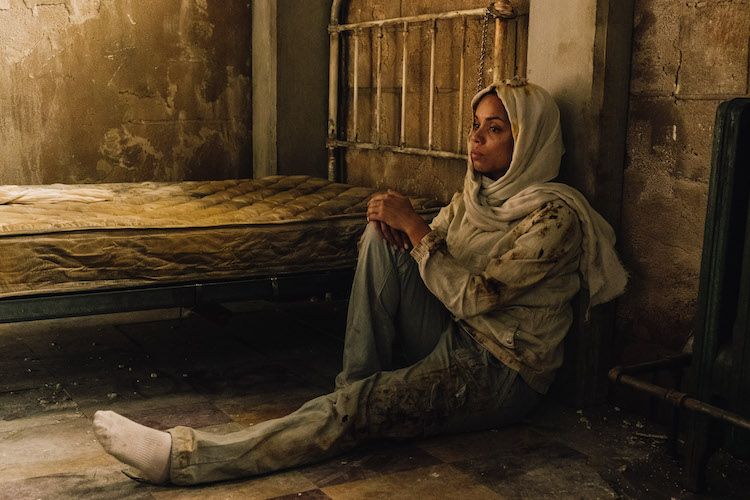 “Yeah, it's fine. I mean, it added to the scene. It was challenging because it meant I couldn't move; I couldn't really go many places in that room.  I'm stuck to one corner, so it added another level of challenge to the performance of how to make the scene interesting and make her delivery interesting without the ability to really move around that much.”

Do you stay in character between takes?

“No, I don't stay in character. We had a really lovely cast and crew, and everyone was really kind and [we had] lots of chats, and it was a really nice atmosphere.”

Cool. Your character Khadija has a nickname in this.  Have you ever had a nickname and if so, what was it?

“My dad calls me Gina Pina, which I don't really understand where it came from or what it means, so that's the only nickname I have really.”

Okay. What do you hope audiences take away from WILDCAT?

“Well, I hope audiences are entertained, and I hope they get the story of owning your own trauma and not being a victim to circumstances and finding your way.

What was your most memorable audition and why?

“Most memorable audition? Oh, there's just been sooooo many. It's so hard to remember.  I remember one of my earliest auditions when I was probably a teenager, I think I was probably seventeen, and I went in and did an audition for a part in “Doctor Who,” and I had to pretend that I was swimming and that this monster pulls me under the water.  The casting director sat in a chair in an office, and she's like, "Go on then.  You’re swimming."  So, I was having to pretend I was swimming.  It was all very embarrassing. I remember at the time just thinking this is so embarrassing, whereas now it’s just normal.”

A lot of actors that start in the industry don't really understand the level of rejection. You don't obviously get every role that you audition for. What would you say, estimate, how many times you've been rejected for roles?

“Oh, my goodness. So, so, so many times, hundreds and hundreds of times. The amount of jobs that you get, you've probably auditioned for about a hundred that you didn't get, so it's a hell of a lot, you get a hell of a lot of rejection. You get used to it, and you just try not to get too carried away. ‘Cause sometimes you get jumped through.  You’ve already, in your mind, you've pictured it. You're in the lead role.  You’ve won an Oscar.  You've let your mind go there, and then you've not even been offered the job yet. You have to not get ahead of yourself.”

“Oh, I just fall asleep anywhere, really. I can sleep on a train, wherever. Yeah.”

What's the best book you've read recently? And what did you love about it?

“Oh, at the moment, I’m reading, “The Stranger Beside Me,” which is a book about Ted Bundy. It's written by a woman who worked with him and knew him and was friends with him, Ann Rule. It's fantastic. I quite like a true crime, so for any true crime lovers, it's a definite must read.

What's something that people might be surprised to find out about you?

Do you take the hamster with you when you're on location?

People think that celebrities have really glamorous lives. What's the least glamorous thing that you do?

“Everything.  Life is not that glamorous. Yeah, it's anything, it's just little normal, boring life, brushing your teeth.  It’s not glamorous.” 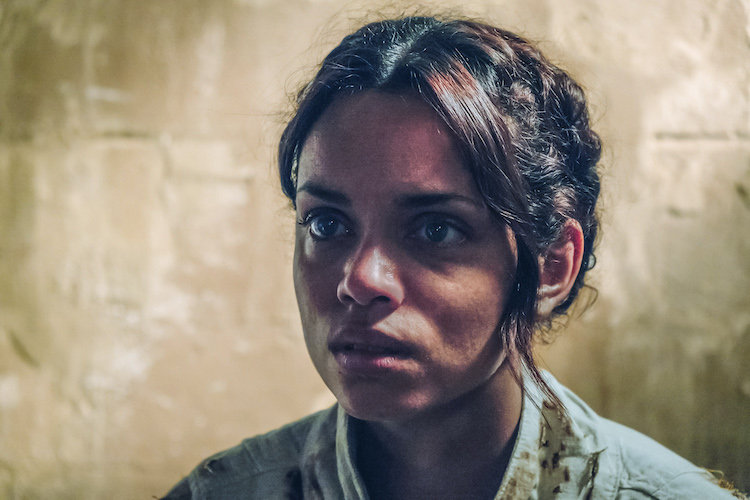 What is your biggest irrational fear?

“I really hate spiders. I really, really don't like spiders. I think that's a common one, but I can't stand spiders.”

Would you ever do a film where you had to work with spiders?

“I mean…probably, yes. If it was a good enough script, a great director. Yeah. I'd probably push that aside.  At least, I'll be able to like act like I'm not bothered by spiders.  Maybe it could cure me.”

If you could star in a remake of any movie ever made, in which one would you want to star and what character would you like to play?

“Ooh, movie, I suppose, I really love OTHELLO, the play. I'm sure there is a movie of it, but I would love to play Othello in a kind of re-imagining of it – Othello as a woman. Yeah, I'd go for that.”

What is your biggest complaint about acting as a career?

“My biggest complaint? I suppose, COVID has sort of weirdly been quite nice; I've been able to be at home for a really long period of time, which for years that's just not been the case. Now I'm back in New York at the moment, and then I've got a job [for which] I'll be going to Bulgaria. I think that you move around a lot, and it means that staying in touch with friends and family is harder, and you don't get to see people as much as you'd like to. I'd say that's one of the downsides. Yeah.”

If someone interviewed your family and asked them how you've handled success, what do you think they'd say?

“I think they'd probably say, “Well.”  I don't know. None of my family is really in this industry, so they don't really get it. They probably just feel like, “Yeah, she's fine.  She's all right.  She's doing well.”

What made you want to go into acting?

“It’s such a silly story, but I was spotted in the street when I was fifteen. This woman was making a show for MySpace – that’s how long ago it was – she saw me, and she thought I was right for the role. She offered me to come in and audition, and I did, and then I got it.  Then I got an agent.  It wasn't something that I knew I wanted to do; it's something I kind of fell into, and I'm really happy and lucky that I did because I love it."

Cool. If you had to be stranded on a desert island with any of your former co-stars. Who would you want it to be? And why?

“I worked on this show in the UK called “Ice Cream Girls.” And there's a fantastic actress in it called Holli Dempsey. I would live on an island with her very, very happily. She's brilliant.  She's so much fun. We've known each other for quite a few years now. She's just like the best, and she's quite resourceful, so I feel like she's good at gardening and growing her own food and being self-sufficient. I feel like she could look after me.”

If you were stranded on an island by yourself, would you survive?

“Probably not.  I'd probably be a goner.  I'm not that resourceful.”

Would you rather listen to music or a podcast?

What is it about podcasts you like so much?

“I just love them. You just put them on.  I usually go to sleep listening to podcasts. I'm really into crime podcasts, like “Crime Junkie” and “The Last Podcast on the Left.”  I love a podcast; I'm pretty much always listening to a podcast.” 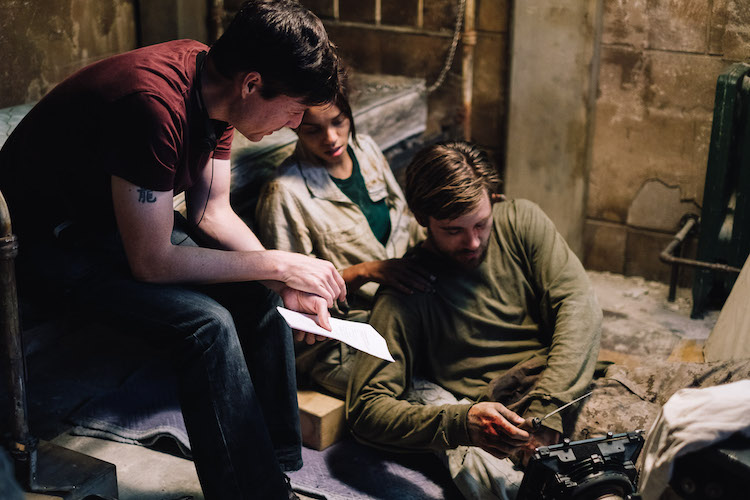 What did you find most surprising about acting when you first started out?

“Oh, I think I found it surprising that I was good at it.  That was a surprise. I think it's just a very freeing, liberating thing to do. When you start doing it, I think you kind of feel silly, and you have to do stuff that's really uncomfortable or embarrassing, and then it's really liberating.  You can just kind of do anything when you're acting and behave in any way because you're playing a character. So yeah, it's very freeing.”

What do you think is your best personality trait?

“My best personality trait? Oh God, I don't know. I'm so British, we don't like saying anything nice about ourselves. I think, I can find humor in most situations, and I think that's a good personality trait to have.”

Yeah. That's a very good skill.  What motivates you to work hard?

“I think probably my dad has such an amazing work ethic, and he's always been very work-focused, and I think he's kind of put that into me and my sisters. So yeah. I think it's from my dad really.  I just have a quite high work ethic. I like to work a lot.”

What does your dad do?

“My dad works in the police.”

Oh, Did you reach out to him for inspiration in “Broadchurch?”

“I think I spoke to him a little bit about it. I mean, it's funny because he's in the police, so when he watches stuff, he's like, "Well that's wrong.  That would never happen." He can be handy, but at the same time, he's just going to tear apart whatever the script is, because obviously it's not as real as real life, but he can be helpful. Yeah.”

Yeah. I have a police friend who's the same way. He's like, "I can't watch any of those movies because they're all wrong."

What the last movie that you actually went to?

“The last movie I actually went to? Probably TENET, they released it over in the UK in the cinema for a while before the lockdown. Yeah. I remember being so excited to go and see it because nothing had been coming out really.  Everything got pushed. Yeah. It was great.”

What did you do to stay entertained during the COVID lockdown?

“Oh my God. Just watched so much television, sat on the sofa a lot, read lots of books, tried to take up running like everybody did. Yeah. I wasn't that productive. I'll be honest. I didn't learn a language or anything.”