Hey friends, Barbarella here excited to share with you my conversation with REDEMPTION DAY’S Gary Dourdan.  The actor best known for portraying Warrick Brown on the hit series CSI slides into a different kind of role.  In the film, his character, suffering from PTSD, must embark on a rescue mission to the part of the world where his trauma occurred.  Below is the bulk of the exchange the actor and I had. 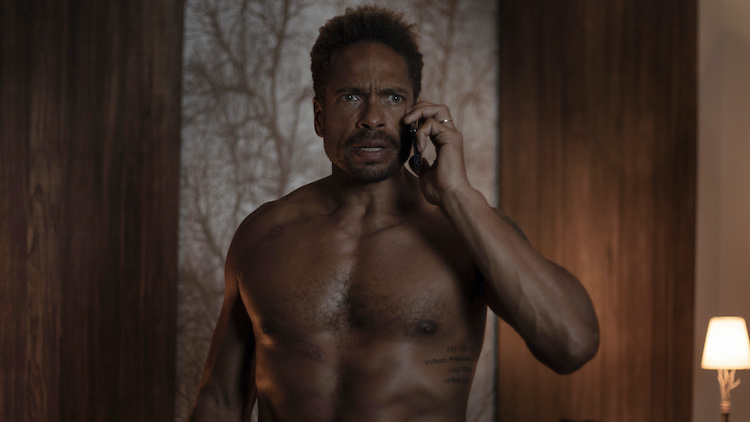 I'm going to start with kind of a hardball question, if that's okay.

I don't know if you're aware of it, but there was quite a strong reaction from Algerians to the REDEMPTION DAY trailer that was posted online. Many expressed concern that the film put Algerians in a bad light, and it didn't show the Algerian people as the warm and welcoming people that they are. What would you like to say to people who watched the trailer and believe that this film promotes negative stereotypes of Islamic nations?

“That’s the first thing that I thought of when I thought about doing it since one thing I hate is to perpetuate the misinformation that is put out by American filmmakers about people abroad, especially Muslim people, because I've been to Muslim countries.  These are some of the most gentle people – filled with honor, principle, and dignity – that I've ever met in my entire life.  I live in Paris; my whole crew is Algerian, West African, Moroccan, so I understand the place because we speak about it often. That was one of the things that concerned me, but at the end of the day, what happens is that you have a film that's a thriller, an action/psychological thriller, and it’s not based on a realistic situation or real-life story. This is not a documentary. It's a theatrical release. It's a fantasy film. I have to do my job as an actor, just do the best job that I can do to portray this armed serviceman who goes in there. 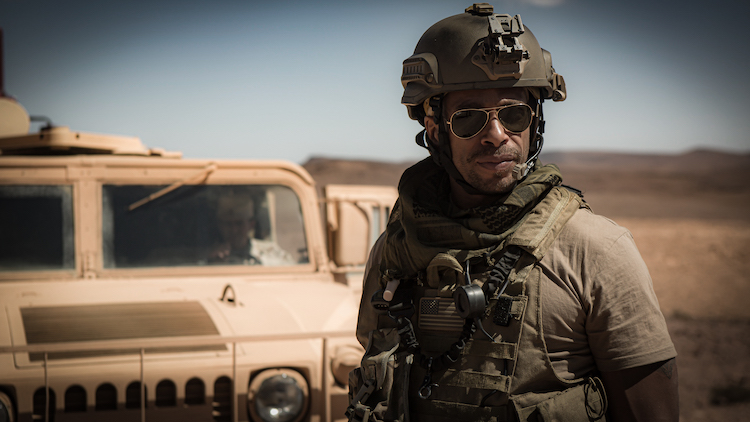 “The thing that I wanted to weave within the film, which is really important, is that although he's an armed serviceman for America, he goes in with a certain respect for everywhere that he is. He learns the local customs.  He learns the local language so that he respects the people that he's with. I do know a lot of people in the armed services. I know a lot of Rangers, Marines, and Navy Seals, one in particular that I crafted my part on. That’s something that they deal with every day, all these lands that they're going in, and they're made to do certain jobs, but they're in places that are just full of lovely, beautiful, wholesome, kind-hearted people. And so that's something that I'd like to continue to speak about. I'm glad you asked me that question because it is a concern of mine, as I do travel extensively and often to a lot of these countries. I don't want to continue to perpetuate [the view of] these people in these different lands as negative.  That’s a concern of the director as well, because the director and writer of the film is Moroccan.  When you watch the film, then you understand that the actual terrorist organization isn't even coming from the Algerian land.”

Your character, Brad Paxton suffers from PTSD. How did you research this disorder, and what did you learn about it that may have surprised you? 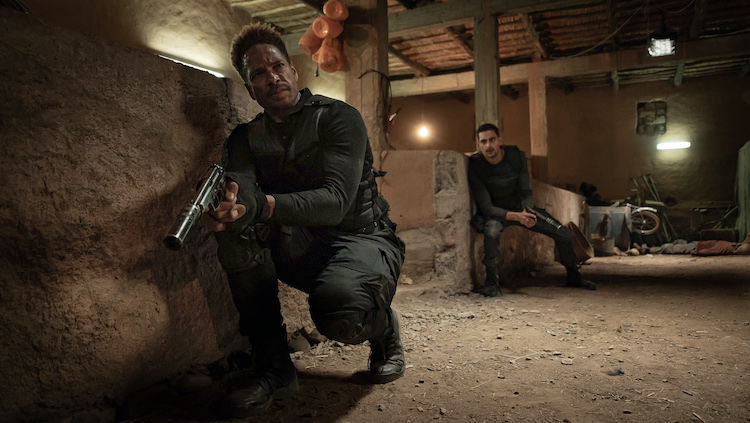 “Well, as I mentioned, I've gotten to know and befriend people in the service, two in particular, that I modeled my character after. One is named Gary, and the other one is named David. I've known them for many years, and some of the things that we speak about are their missions abroad in Iraq and Afghanistan and some of the things that they carry home to their families and how they deal with it. There was also a therapist that I was working with some years ago who had offered his services as a 1-800 number to any person in America, so no matter where they were, they could find a therapist near them that could help them through their difficult transitions getting back into civilian life. It's a difficult thing.

“And I was happy to be able to craft this character with that kind of depth and those dimensions, because so often we see action films and action heroes just go through many different fight series. They just seem unflappable. They're superheroes, and that's not really the way it is. There's a lot of human qualities and frailties with the character that I wanted to bring forth and humanize him in a lot of ways. He’s coming with a past, and he has a history. He’s struggling to deal with it and to maintain his composure throughout it. Now, it's really personal – very important for me to put some human elements in it and not just make it an action thriller film.”

Right. Would you talk a little bit about your experience shooting in Morocco?

“First of all, Morocco is like the fifth character in the film. It's so gorgeous there. I yearn to go back. I was there for New Year’s last year. I just got back from Morocco a month and a half ago filming another project. It is one of the most beautiful places on earth. The farm land is extraordinary. The people are gentle. They're just full of passion of life, and they have great traditions. The food is amazing. You can drive from the mountains where it's snowing down to the beach and surf. It's very similar to California in that way. There's so many different micro-climates. And as I said, the people are just extraordinarily kind, and they have a long history of walking through the streets of Marrakesh since 6,000 years BC. 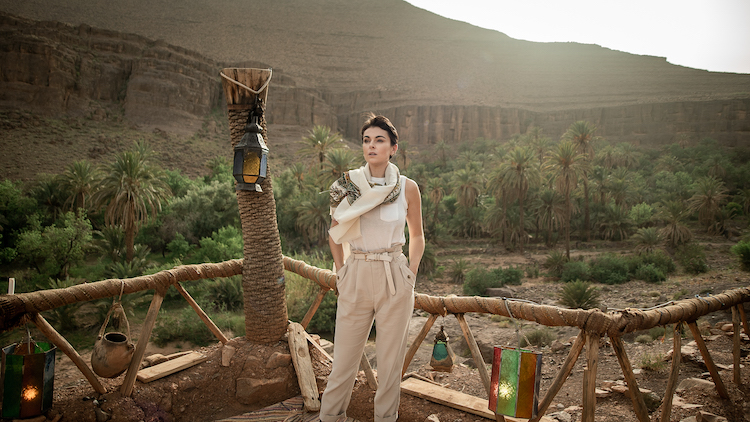 “And you're just touched when you get there. The craftsmanship is bar none. You'll find people making crafts and building things and doing artistic work that is extraordinary. I definitely recommend it to anyone that's looking to travel to a place because it's so much history there. I love Morocco. I love filming in Morocco.

“And on [REDEMPTION DAY], I was able to go even a bit deeper and learn how to speak some Arabic. Now in Morocco, they speak Darija, which is their kind of customary language, but they also speak some classical Arabic, as well. I had to learn that, which was great for me, and I enjoy that part of the job. I love Morocco. I can't wait to go back. And this film was a Moroccan production with a Moroccan director [Hicham Hajji], as well." 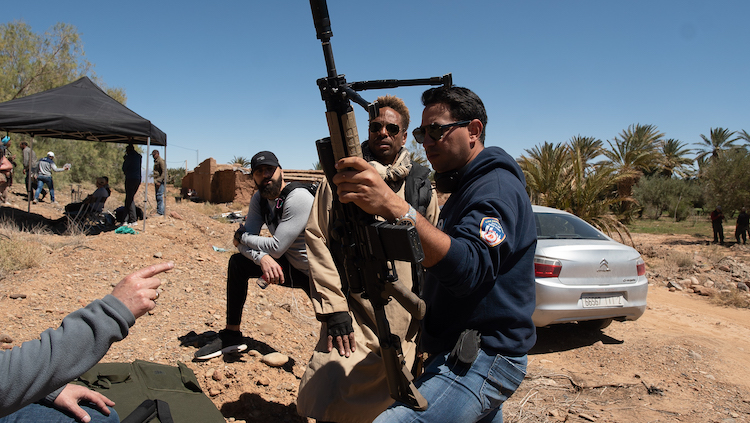 Yeah, well, I was just going to ask about working with him. This was his first film, right?

“It was his first major blockbuster production release, yes. A lot of films get filmed in Morocco. Ridley Scott has filmed several films. Tony Scott’s filmed several films there. So many films have filmed there, but they're always American or English directors. This was the first American-style action film filmed by a Moroccan director. I feel very, very, very proud to continue to perpetuate production in Morocco, filmed by Moroccans and Africans, in general. I just finished a film by a Jewish Moroccan named Zhor Fassi-Fihri that was done about two months ago. I can't wait to go back.”

It sounds like you love it there. I’ll have to add it to my list of travel destinations.

“I love it there.  You have to go to Marrakesh.  Go to Chefchaouen. There are so many beautiful cities.”

Have you watched the finished film? How do you feel when you're watching your work?

“I hate watching myself on film and TV, but I have to sit through it sometimes. And for this one, I got to sit through one of the first screenings that we had for just cast and crew, and I was able to go in and give my notes because I am a filmmaker. The notes that I gave were less on me and more on the film itself. As I just mentioned twenty times, I love Morocco, so I wanted the director to go back and get some of that footage because he's from Morocco, and sometimes I think when you're living in a place, you're too deep in the forest, you can't see the trees. I wanted people to fall in love with Morocco the way I have. I want them to see the vistas and the lands and the people.

“And so he went back and he got a lot more footage and put that into the film, and now it really looks like something competitive with some of those directors I mentioned before. I'm looking forward to seeing people's reaction because I like the way it looks. I think it's a good-looking film. There's also a great cast in it. It was fantastic working with Andy Garcia, one of my heroes, and Serinda Swan, an ultimate professional, and Ernie Hudson as my dad. I mean, you can't get cooler than that. I had a great time.” 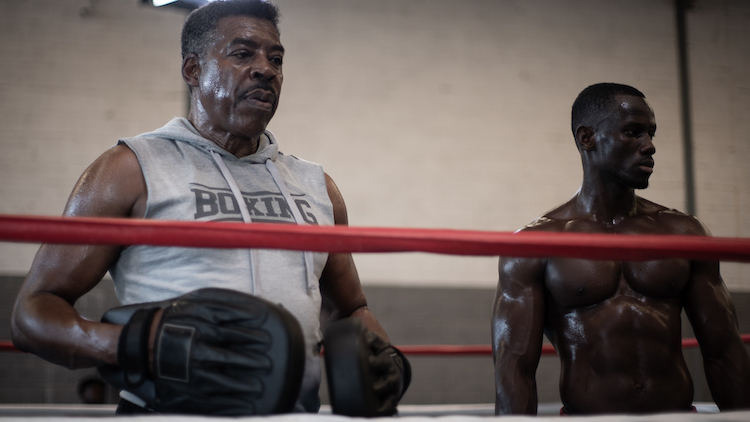 I heard that you had a guitar on set. Is that true?

What kind of music do you play?

“I play whatever. I play covers. I have a huge list of people that I like to play, whether it's Bill Withers, or Jimmy Hendrix, Stones, Van Morrison. I just love so many.... There are so many different songs that I like, then I have my own music, as well. I love jazz, so I'm constantly just plucking around. It makes me feel comfortable, and it grounds me wherever I am.” 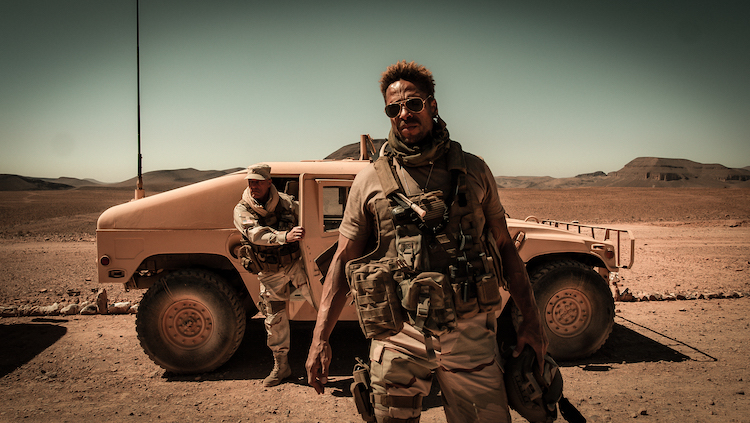 If you could snap your fingers and change one thing about the film industry, what would you change and why?

“Wow. I think that's going to take more than [the time we have left to answer that].  It goes back to the first question you asked me about us perpetuating negative imagery.  I’m having a hard problem with the slave narratives of films because there's such a vast history of storytelling throughout the African-American or the African community. We have so many stories that I think slavery is not our history; slavery just interrupted history. There’s such a vast history from many different lands, with many different people. One thing I really want to get back to in this vast medium that is filmmaking is just telling great and genuine stories. If I could snap my fingers, I would get on Hollywood's back to stop rehashing these old stupid-ass films that we've seen.  I'd start to get into all of this wealth, this encyclopedia of fantastic stories we have.

“And I think that's going to bring us closer together as a race, the human race. You know? When we start to get into really telling stories about our cultures, it’s not really about White Power and Black Power. It's about [understanding] us as a cultural people, and really appreciating each other and seeing the differences that we have and our cultural uniqueness. Then we’ll start to see that that Irish story is very similar to that Nigerian story. You know? We'll start to notice that we’re more alike than [not].  That's what it's about. That's what's going to pull us closer together as a people.”

I would've loved to have spent more time speaking with Gary Dourdan, but in that short conversation, I feel as though he not only touched on some profound topics, but he also convinced me that I need to visit Morocco at some point in the future.  Perhaps, he also convinced you to see REDEMPTION DAY.  If so, it comes to theaters Friday, January 8, and then launches January 12 on Digital and On Demand.