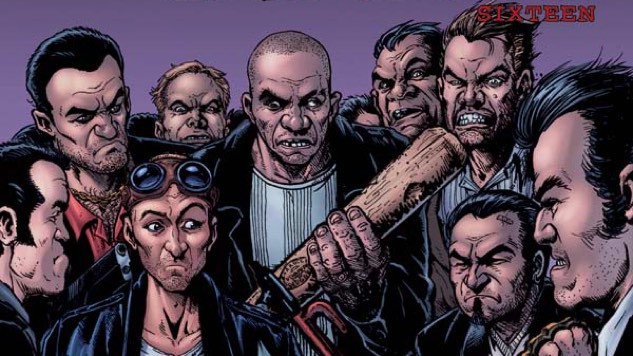 Garth Ennis' violent, bloody, irreverent take on a world where superheroes are drunk with the power of celebrity turned a lot of heads during its run, including those of Simon Pegg, who had one of the characters based on his appearance, and those of the top brass at DC Comics, THEY cancelled the book after six issues on their Wildstorm imprint. The story goes that they were less concerned about the sex and gore, and more concerned with the anti-superhero stance the book held. It was a blessing in disguise, though, since DC dissolved Wildstorm shortly after, and granted Ennis "special dispensation" to take the book to another publisher (Dynamite Entertainment) and finish the run. Ennis stated that he wanted to "Out-Preacher Preacer" (his best-known creation) in terms of sex and violence. He seems to have succeeded, in that regard.

Fast-forward a decade after the book's run ended, and we have THE BOYS. The Amazon Prime series based on the books. If you can judge a recipe by reading the ingredients, this one looks delicious: Co-created by Evan Goldberg (SUPERBAD, PINEAPPLE EXPRESS, THIS IS THE END, THE INTERVIEW), his longtime creative partner Seth Rogen (if you need citations here, I'm glad you came out of your coma OK, and wish you a full and speedy recovery), and SUPERNATURAL creator Eric Kripke (seriously... SUPERNATURAL is one of my favorite TV shows ever, and the longest running sci-fi show in TV history), the show also features a strong cast of leading players.

The series is set to debut on July 26th, and it looks to be great fun.

That's it for now, so until next time,
keep it geek!